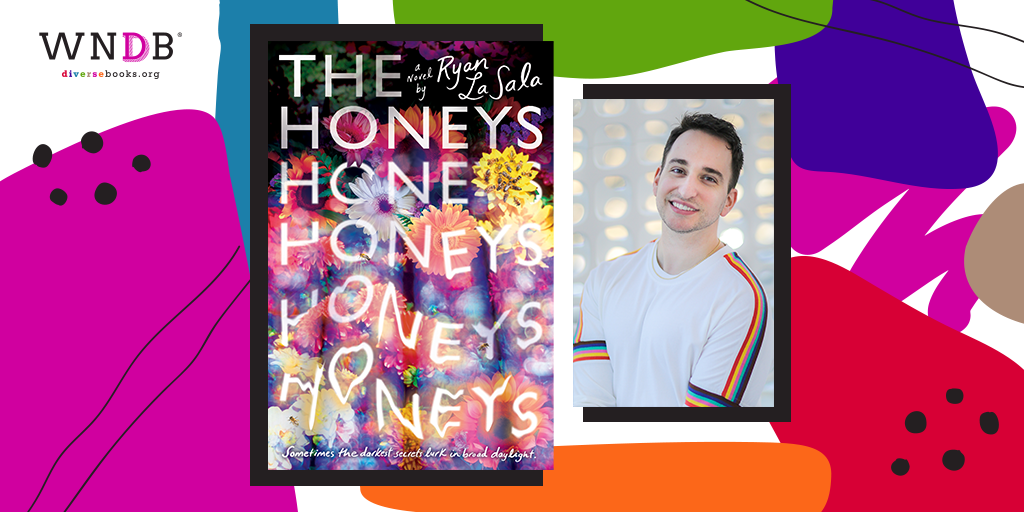 Today we’re pleased to welcome Ryan La Sala to the WNDB blog to discuss The Honeys, out August 2, 2022!

Mars has always been the lesser twin, the shadow to his sister Caroline’s radiance. But when Caroline dies under horrific circumstances, Mars is propelled to learn all he can about his once-inseparable sister who’d grown tragically distant.

Mars’s genderfluidity means he’s often excluded from the traditions—and expectations—of his politically connected family. This includes attendance at the prestigious Aspen Conservancy Summer Academy where his sister poured so much of her time. But with his grief still fresh, he insists on attending in her place.

What Mars finds is a bucolic fairytale not meant for him. Folksy charm and sun-drenched festivities camouflage old-fashioned gender roles and a toxic preparatory rigor. Mars seeks out his sister’s old friends: a group of girls dubbed the Honeys, named for the beehives they maintain behind their cabin. They are beautiful and terrifying—and Mars is certain they’re connected to Caroline’s death.

But the longer he stays at Aspen, the more the sweet mountain breezes give way to hints of decay. Mars’s memories begin to falter, bleached beneath the relentless summer sun. Something is hunting him in broad daylight, toying with his mind. If Mars can’t find it soon, it will eat him alive. 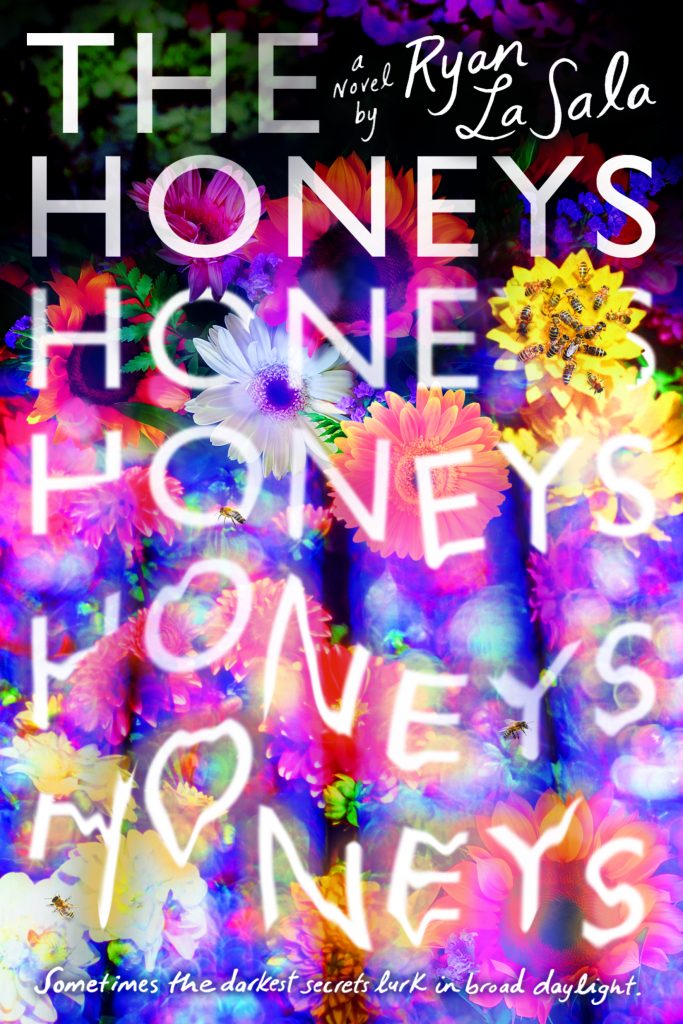 Okay. About me: so, you know how in every fantasy there’s the like, wicked and vain sorceress character who is always cackling and scheming to steal the youth of the princess? That’s me except I’m not that concerned with youth, and really just more into the cackling part. And talking to enchanted mirrors.

Really though, I’m a storyteller with an interest in subverting the traditionally defeatist mythology around queerness, which has sort of given me this campy, villainous aura in publishing, which I enjoy. My missions as an author is to center queer characters in stories that only they can tell, and to create a new mythology that finds power in queerness. I like joy and humor, too. And of course cackling.

What can you tell us about your upcoming book, The Honeys?

The Honeys is like if you took the cult-classic Heathers and drowned it in the bright, disorienting vibes of Midsommar. It’s a teen horror and it follows Mars, a queer kid searching for answers after his twin sister dies under horrific circumstances. Mars knows just where to look for answers—the sleep-away camp his sister was attending—and who to look at: The Honeys, a group of gorgeous, terrifying popular girls at camp who were toying with Mars’ sister right up until she died.

I’ve had this book in my head for a long, long time. Ever since I heard some grown men refer to a group of teen girls as ‘honeys,’ and I wished (with such bright spitefulness that it scared me) for a group of girls that could command a power terrifying enough to protect them from a world intent on consuming them.

From the book’s synopsis, The Honeys is supposed to feature a genderqueer protagonist. What inspired this character and did you get any consultation for this type of representation?

Yes! Mars, my darling Mars. Nonbinary, genderqueer, fluid—an amorphous identity that remains diamond-durable as everything else around Mars warps in the bright light of the Catskills summer. Mars is my shadow—a version of me who inherited some of the darker experiences of my own life, and who found power in that darkness. Like Mars, I had to grow sharp to survive the discomfort of belonging forever to the between of boys and girls. Like Mars, I never questioned my humanity despite the constant, ambient assertion that I was monstrous and strange. Like Mars, I look like a boy but find great power in my femininity, and refuse to believe one should cost me the other.

Mars isn’t me though. Mars is a knife I forged to carve open (more) space in horror for queerness. Mars is the answer to the question: what is the worst nightmare for a summer camp steeped in the ultra-binary, heteronormativity of traditional Americana?

In writing Mars, I consulted with others like me. Queer people who attended summer camp. Nonbinary people with different adolescents. It was important to me to get right not just the logic that makes up Mars’ choices, but also the specific tension between Mars and the Honeys, specifically their hyper-femininity, and the sororal exclusion that Mars covets. It’s a very complex envy entangled in an identity most people have never read, so I hope people take their time to read deeply, and understand why Mars is the way he is.

Femininity seems to be a large theme of your work, from exploring the destruction of toxic gender expectations to the fabulous imagery in your books. Could you speak a little about this from your perspective as a queer author?

Never, ever, ever have I questioned that there is a sublime power in femininity, flamboyance, and the pursuit of beauty. I embody that. And in a body like mine, it creates a contradiction. For instance I’m often in heels and my nails are almost always painted, but I can also lift three times my body weight. But does that need to be a contradiction? I don’t think so. Maybe these things contrast, but they aren’t antithetical.

It’s very important for me to show that queerness and flamboyance is for everyone, not just those deemed androgynous. It’s equally important for me to show power underpinning authenticity. Often, queer characters become themselves at such a high cost. My characters suffer plenty, but often their power comes from embracing their pride. I’m all about unleashing personal authenticity.

How would you describe your writing process? Are there any strategies you use to help free yourself creatively?

I write like I draw. I sketch out my books in messy outlines, just scraps of scenes and dialogue, and then I mash them all together until I have a shape. I explore that way until I have a rough version, then I ink it all and add definition, details, and color.

My favorite strategy is immersion. If I can somehow live the fantasy I’m writing, I’ll do it. For The Honeys, this meant going onsite to my old summer camps and exploring them when they were abandoned in the summer of 2020. And visiting apiaries (honeybee farms). And eating a LOT of honey from a lot of different places. People have even started to send me the stuff from their regions! 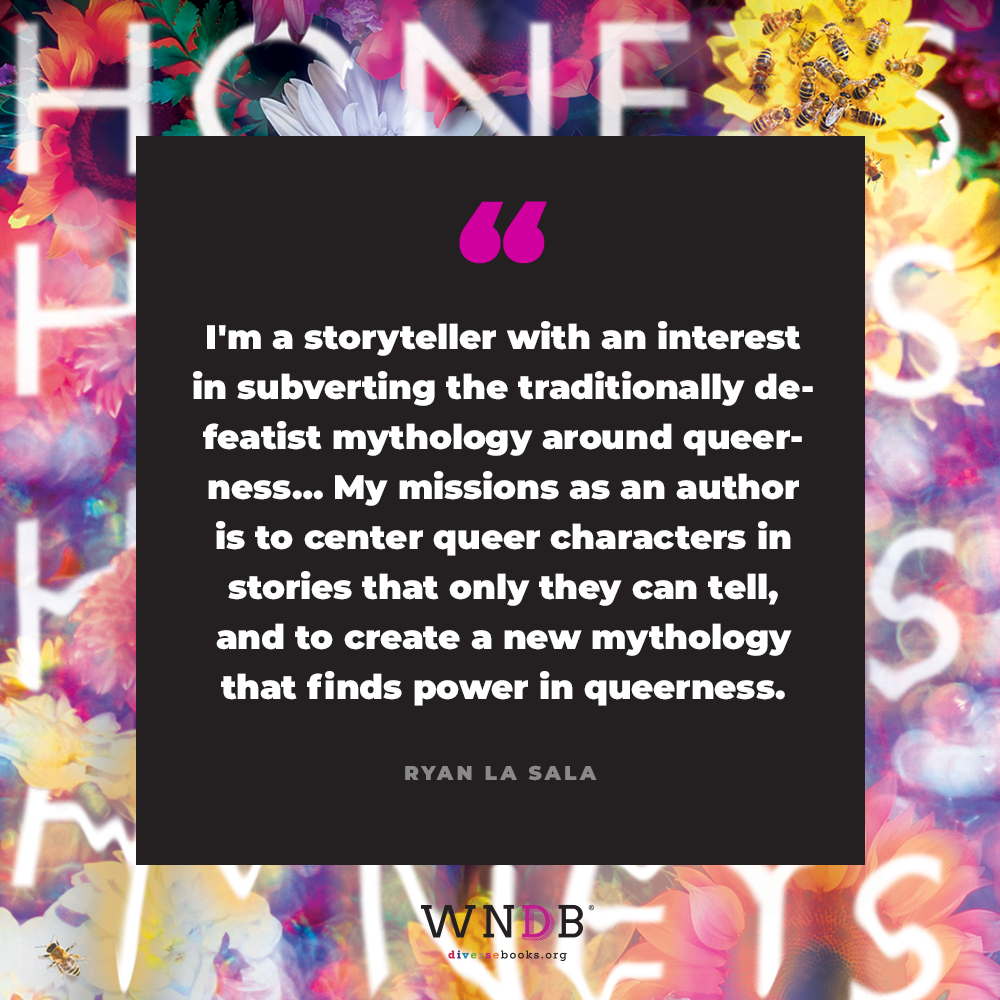 What would you say are some of your biggest influences/ sources of inspiration as writer, both literary and otherwise?

Anime. I used to shy away from admitting this—all these other authors are out here citing like…James Joyce and Tolkien—but those books bored me to death. I found much more compelling storytelling in anime, cartoons, comics, and even video games. Kingdom Hearts, for example, was foundational to the world-hopping smorgasbord that is Reverie. And Be Dazzled was inspired by cosplay competitions at comic book conventions.

Specifically for The Honeys, the biggest influences and inspirations were bees themselves. Mother Nature, as an author, writes minified horrors you can only read if you pay very close attention to small things. Bees fascinate me. Their rules and rituals. Their unerring sense of order within the chaos of a swarm. If ever I got stuck while writing The Honeys, I sat down with a bee and asked it what to do.

What’s a question you haven’t been asked yet but wish you were asked (as well as the answer to that question)?

The question is: are any of the characters in The Honeys based on real people? In actuality, I do pull from my life to create my books, but it’s rare that a character is a direct reflection of anyone I know. That said, I always prepare myself for the moment my friends text me lines or moments in my books that are absolutely ripped from reality. The Honeys for example has at least two of my most terrible tweets embedded in the text.

Hardest: finishing a book, and I don’t mean writing the ending. I mean polishing it up and declaring it done. I grieve every time. And I feel betrayed. How dare it exist beyond me? Without me? That insolent brat! I brought you into this world, and I’ll take you out!!

The best: I love most of the writing process but my favorite indulgence is writing elaborate visuals for my readers to imagine, or for artists to create.

What advice might you give to other aspiring writers, especially those looking to finish their first book?

Okay. Imagine me lounged on a velvet sofa, dark wine swirling in my glass, dark lips curled into a knowing smile, and I say, “My dear, the wicked truth of writing a book is that the true work starts after you finish.” It’s hard to hear when the end feels so impossible to reach, but for me it’s always been the case that a book reveals itself to me only after I’ve written it down, and I finally get that chance to sit back and see it all at once. And I wonder: did I get it right? Revising is such a blessing. Revising something is bringing it into focus with the dream of itself. So, my dear, power through to the ending so that you can get it all out, and then get back to work.

Are there any other projects you are working on and at liberty to speak about?

My current project is very mysterious. To me, I mean. Normally I don’t mind sharing a few details here and there, but I sense this book will pull the carpet out from under me several times as I write it. The furniture is going to move itself, I mean, and if I make a statement now that roots me to the spot, I’m going to be crushed by a sofa. So, for my own survival, I am not at liberty to reveal the dark design I toil within. And yes, these are all hints.

Finally, what diverse books would you recommend to the readers of We Need Diverse Books?

I think about Pet by Akwaeke Emezi and Ring Shout by P. Djèli Clark all the time. I also love recommending We Set the Dark on Fire by Tehlor Mejia, and Darius the Great is Not Okay by Adib Khorram.

Ryan La Sala writes about surreal things happening to queer people. He is the author of Reverie and Be Dazzled and lives in New York City. The Honeys will be published by PUSH on August 2, 2022. Visit him online at ryanlasala.com.

Previous Post: « Q&A With Rachel Lynn Solomon, See You Yesterday
Next Post: Q&A With Xiran Jay Zhao, Zachary Ying and the Dragon Emperor »
Save the date for the #WalterAwards23! You can now