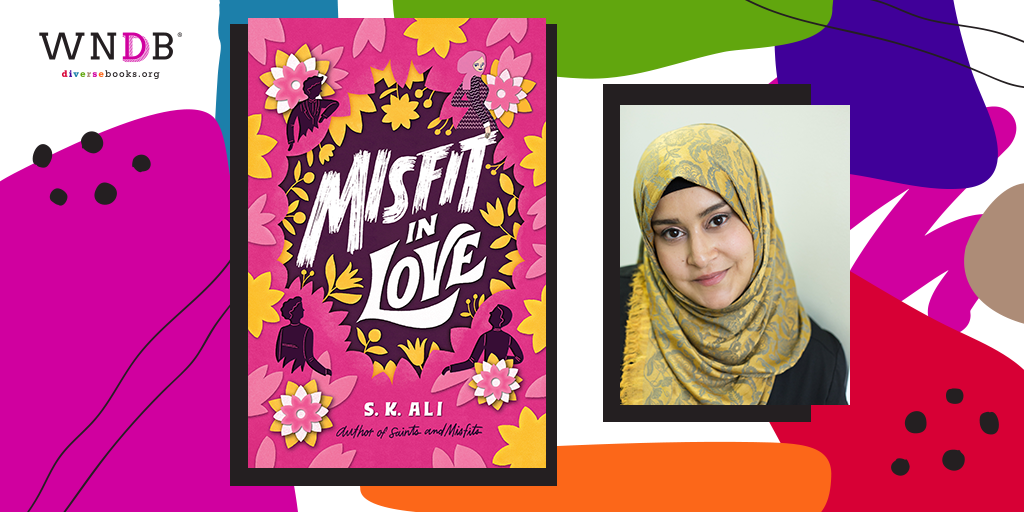 Today we’re pleased to welcome S. K. Ali to the WNDB blog to discuss her YA novel Misfit in Love, out May 25, 2021! Read our roundtable interview with S. K. Ali and other romance writers.

In this fun and fresh sequel to Saints and Misfits, Janna hopes her brother’s wedding will be the perfect start to her own summer of love, but attractive new arrivals have her more confused than ever.

Janna Yusuf is so excited for the weekend: her brother Muhammad’s getting married, and she’s reuniting with her mom, whom she’s missed the whole summer.

And Nuah’s arriving for the weekend too.

The last time she saw him, Janna wasn’t ready to reciprocate his feelings for her. But things are different now. She’s finished high school, ready for college…and ready for Nuah.

It’s time for Janna’s (carefully planned) summer of love to begin—starting right at the wedding.

But it wouldn’t be a wedding if everything went according to plan. Muhammad’s party choices aren’t in line with his fiancée’s taste at all, Janna’s dad is acting strange, and her mom is spending more time with an old friend (and maybe love interest?) than Janna.

And Nuah’s treating her differently.

Just when things couldn’t get more complicated, two newcomers—the dreamy Haytham and brooding Layth—have Janna more confused than ever about what her misfit heart really wants.

Janna’s summer of love is turning out to be super crowded and painfully unpredictable. 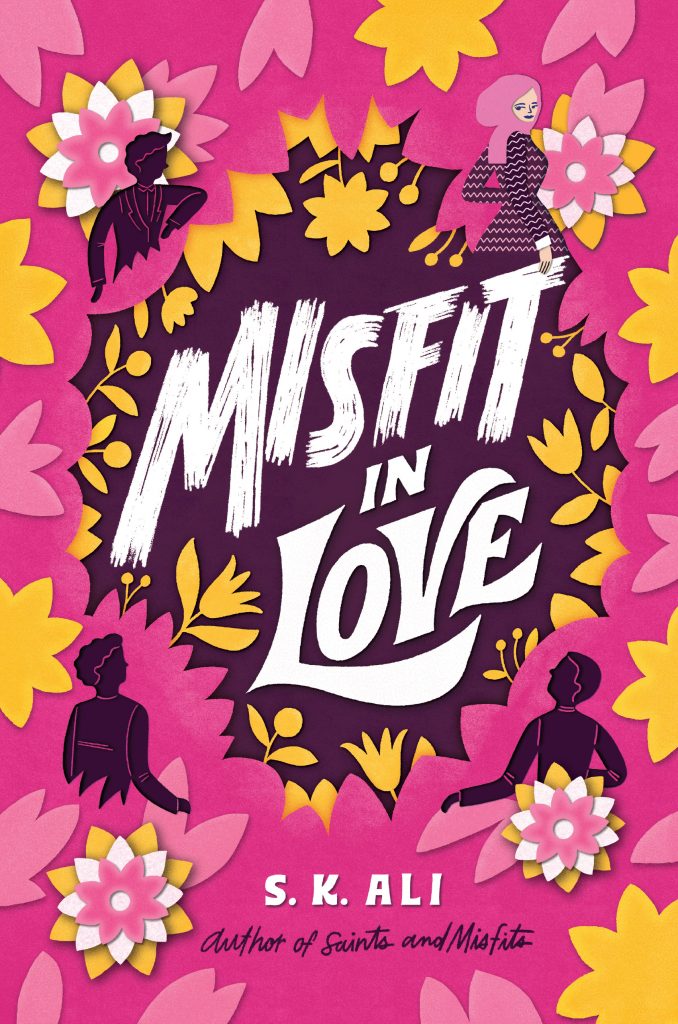 Why did you decide to write a sequel to Saints and Misfits? How did you know that there was more to Janna’s story?

The sequel was a response to readers’ queries about the ending of Saints and Misfits. A lot was left open at the end of my debut novel and many readers wanted to know how Janna turned out. They wanted to see a happy ending—well, happier ending—for her. I gave a little hint of that in my second novel, Love from A to Z, where Janna had a small cameo appearance, and the way readers reacted to that convinced me to continue Janna’s story—to show her going on with her life after trauma. And to do this in a joyous way, I set her journey to the background of a really happy thing: her brother’s wedding.

The cover for Misfit in Love is absolutely gorgeous and so vibrant. What elements of the cover do you think best represent the story that this sequel tells?

The paper flowers represented by the cutwork-like illustration really connects to and captures the joy that Janna feels at a pivotal point in the story. The entire cover communicates the exuberance that comes from a summer wedding (in the old, pre-pandemic days!) when there are flowers and dressing up and new people to meet and just all the noise and clamor of a big family getting everyone they love together to celebrate love.

For Janna, who is more subdued with her happiness and the showing of her love, this is something out of the ordinary but she rises to the occasion and the cover captures this “blossoming” perfectly. I absolutely love Lucy Ruth Cummins, the art director of the cover, and Mary Kate McDevitt, the artist, and the work they did together! 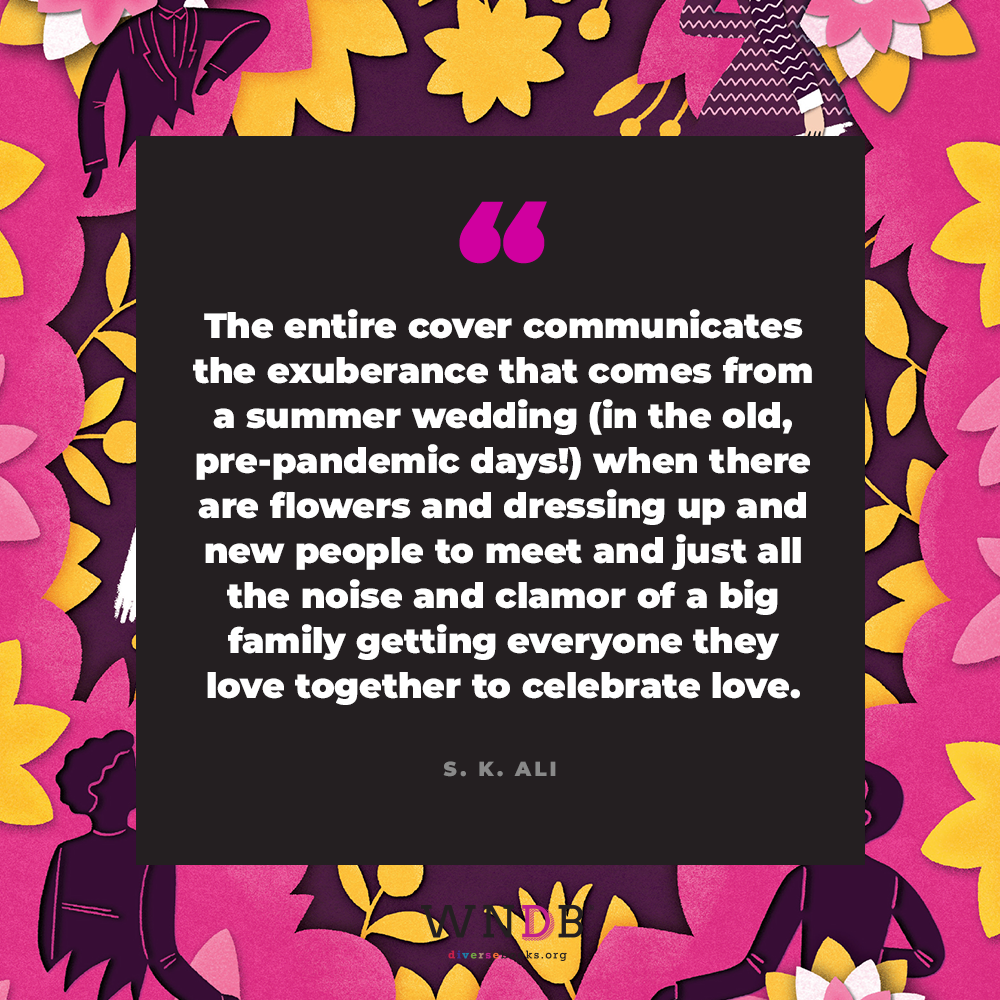 Without giving too many away, what were some of your favorite scenes to write in Misfit in Love?

I enjoyed writing any scene with Janna’s friend Sausun in it. She’s got an assertive personality and it played well against Janna’s more subdued one. When she shows up in the story, there’s a natural enlivened mood to the scenes she’s in.

I also loved writing the dynamics between Tats, Janna’s best friend, and Janna. They are such good friends in this easy-going yet direct way, so much so that their interactions are always charged with bursts of emotions, reveals, and humor.

From a craft perspective, what was the easiest aspect of writing this sequel? What was difficult about it?

The easiest was knowing all the characters inside out. Most of them had been in Saints and Misfits and had their distinct characteristics. There were only a few new characters to introduce but they were fun to do because they were additions to an ensemble that already had relationships going.

Of course, then the challenging part of this presents itself: Trying to give the right amount of information about these characters so that readers new to Janna’s life and the world could still feel at home, without knowing anything about the prior story. My editor, Kendra Levin, really emphasized the need to make this sequel also a stand-alone, and, on seeing how it turned out, I’m really glad she did. It made me grow as a writer and resulted in a book accessible to more readers. A double-win.

If you could come up with your dream panel to promote this book, what would it be about? What other authors might you want to have on it with you?

Ah, what a great question! I’d love to be on a panel of authors who have written books set during weddings. So that would mean, off the top of my head, Morgan Matson, Rachel Lynn Solomon, Nandini Bajpai, and Sarah Dessen. Maybe even Kevin Kwan, author of Crazy Rich Asians. I’m sure we could talk about literary weddings for hours!  (Someone make this happen?)

What have you learned about writing and publishing in the years since Saints and Misfits?

I’ve learned that my job as a writer is to always be working on my next story. To consistently work on my craft and grow my storytelling skills because that’s my bread and butter. That, yes, I can work on promotion and marketing but I’m published because I have stories to tell not because I can make a cute graphic.

Do you have a writing routine or any particular writing habits you’ve developed that you absolutely love?

I love that when I get stuck while writing, I clean up my office and organize all my notes and materials and just declutter my physical space which helps declutter my brain. I then make a teapot full of sage tea and pour myself little cups while I get back to the soul of my story—which I try to make as simple as possible.

I have a quote in my writing space from the artist Jacob Lawrence that says, “When the subject is [complex], simplicity is the only way to treat it,” and since I try to tackle some tough issues in my work, I train my mind to distill the themes of the story I’m struggling with into the most essential bits and convey those with clarity and sparseness. I find organizing my outer creative space helps organize my inner creative space.

What do you want to write next that’s thrilling and slightly scary to you as a writer?

I want to write a mystery-thriller! It was my first genre-love as a reader (that and horror—but um, no, I’ve grown up to become too aware of real-life horrors to “escape” into horror fiction) and since my forever-focus as a writer is developing plot, what better way to become more proficient at it than plotting a whodunit? (Which is scary for me because it’s a new space for someone who’s written three character-driven, contemporary novels with romance as a big theme.) I love love love Maureen Johnson’s Truly Devious series and the way it brought a traditional mystery format (with a detective and everything!) into the YA space, along with the work of the amazing Karen McManus who burst onto the scene with her books, and hello, I’m over here hoping to add to the YA mystery revival with some stories of my own someday, maybe even set during a Muslim wedding? *begins plotting*

S. K. Ali is the author of Saints and Misfits, a William C. Morris finalist, winner of the Asian/Pacific American Librarians Association Honor Award and Middle East Book Honor Award, and Love from A to Z, a Today show’s Read with Jenna Book Club selection. Both novels were named best YA books of the year by various media including Entertainment Weekly and Kirkus Reviews.