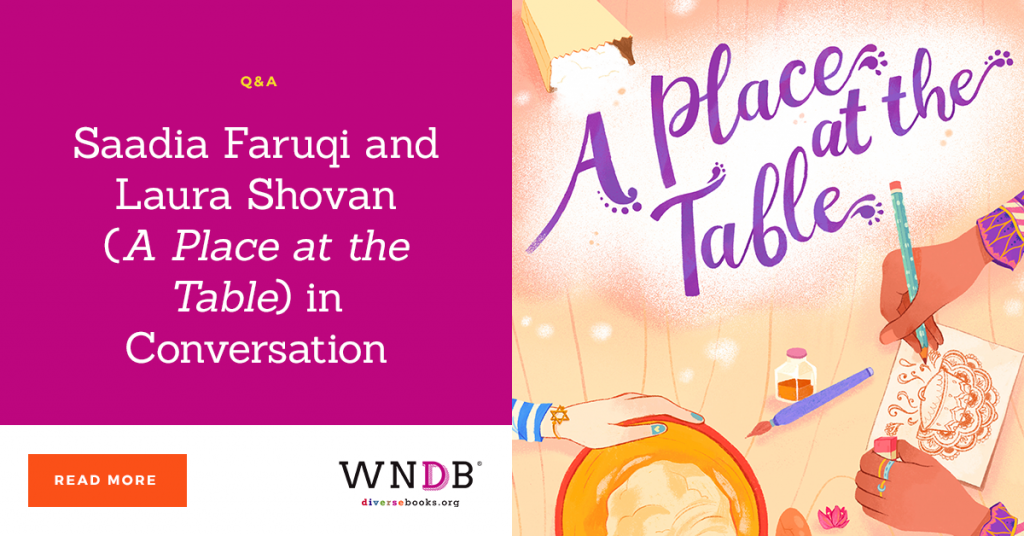 Today we’re pleased to welcome Saadia Faruqi and Laura Shovan to the WNDB blog to discuss their MG novel A Place at the Table, out August 11, 2020! 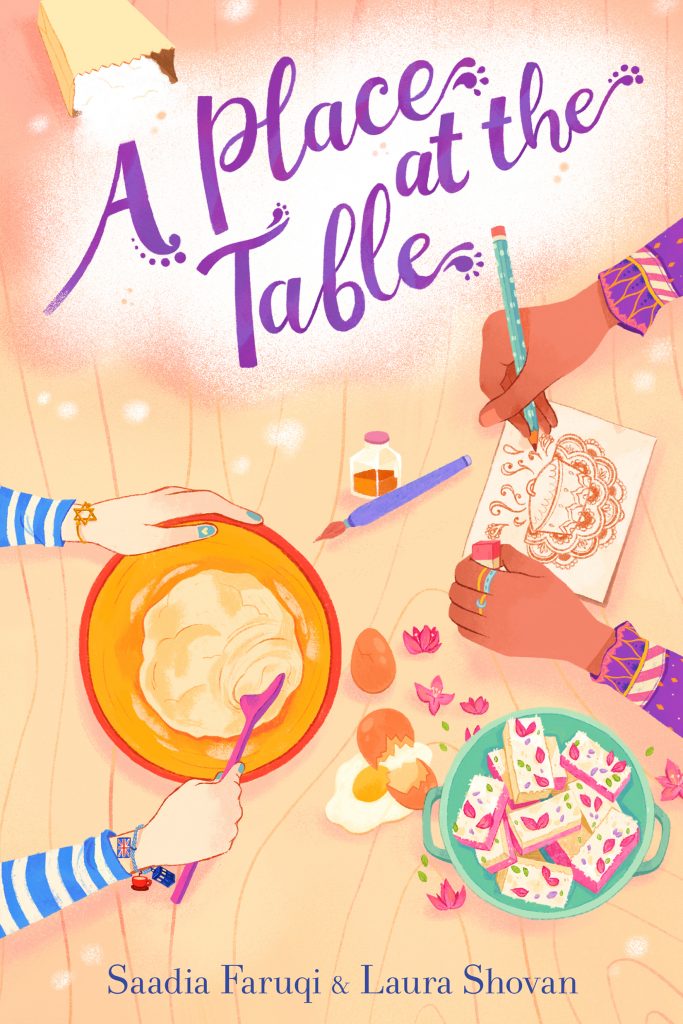 Sixth graders Sara and Elizabeth could not be more different. Sara is at a new school that is completely unlike the small Islamic school she used to attend. Elizabeth has her own problems: her British mum has been struggling with depression. The girls meet in an after-school South Asian cooking class, which Elizabeth takes because her mom has stopped cooking, and which Sara, who hates to cook, is forced to attend because her mother is the teacher. The girls form a shaky alliance that gradually deepens, and they make plans to create the most amazing, mouth-watering cross-cultural dish together and win a spot on a local food show. They make good cooking partners . . . but can they learn to trust each other enough to become true friends?

Our co-authored story of cross-cultural food and friendship, A Place at the Table, is finally out in the world! So many people over the past year have asked us about the book, but few really discuss the title. It’s such a significant title, though, because of my background in interfaith and intercultural activism, where the idea of making room at the table for different people runs very deep. Does it hold any significance for you, Laura?

A Place at the Table is a meaningful phrase for me also. In my work as a poet, former literary journal editor, and organizer/co-host of a reading series, it’s my job to make space for diverse authors and voices in the writing community. But kids like Sara and Elizabeth don’t always have the agency to include peers who are viewed as outsiders. Adults must recognize that there is courage and risk involved in being a good ally—especially for children, who might get pushback or even be pushed out themselves.

Speaking of Sara and Elizabeth, how do you view the theme of allyship in their story?

Allyship is definitely an important concept in this book, as well as in my life. I remember you and I having lots of discussion about this while we were writing the book, that we wanted to model for our readers how to be good allies. It’s something I take very seriously in my work and my personal life. When someone is being bullied, we can’t just stand there and be quiet, although of course, that’s our instinct, especially in the case of children. But that’s not friendship or allyship. We have to stand up to the bully by showing love and protection for our friends.

Citizenship and what it means to be American are also important themes in our book. Why do you think it’s so important to Sara and Elizabeth that their mothers become U.S. citizens?

Both girls are feeling the stress of wanting to be fully American while honoring their families’ ties to a home culture—Pakistan for Sara and England for Elizabeth. They describe the confusion I felt as a bicultural eleven-year-old. I was deeply connected to my mom’s British culture, proud to be American, and yet never felt I fully belonged to either place. I remember it was a big deal when my mother got her citizenship and could vote here for the first time. Being in the voting booth with her, seeing how seriously everyone took the privacy of the ballots, made a big impression on me as a kid. (Enough so that I’m now an election judge!) There is a scene in the book when Sara and Elizabeth go to vote with their fathers and they bump into each other. Sara talks about how proud her father is of his right to vote.

Do you have any memories of voting?

Not really. I was born in Pakistan and lived my childhood under dictatorship. My parents and grandparents always felt that voting was such an important part of civic life, and they shared their sadness at the country’s state of affairs. We did finally get democracy back when I was older, but unfortunately, it was still seen as a farce by many. The most poignant election memory I have is actually the day after the first free elections, when Benazir Bhutto was elected Prime Minister, making her the first Muslim woman head of state in modern times. We went out in our car and followed processions of celebration, honking horns, and singing songs. It was a really strong emotional experience for me.

The one aspect of our book that everybody wants to talk about is food. I know you’re really into baking. How much fun was writing the food aspects for you?

You know I always do research when I’m working on a book, even if it’s a topic I know well. For A Place at the Table, I visited an after school cooking club, interviewed people about their citizenship experiences, and did a lot of cooking! I tested every recipe that Sara and Elizabeth make in the book. I loved trying the Pakistani dishes from Mrs. Hameed’s class. The highlight for me was samosas, which were delicious. I texted you a photo of the finished product. Spending time in the kitchen with family is something Elizabeth longs for throughout the novel. She doesn’t articulate this, but cooking together symbolizes her longing to connect more deeply with her parents’ cultures through food.

We joked a lot about how you don’t enjoy cooking, despite the theme of our book. But I’ve noticed that you and your kids have been baking during the pandemic. What are you enjoying about making food with your children?

I think enjoying is the wrong word! I’m an introvert by nature, so doing anything with other human beings has an element of stress in it! But these days my daughter, who’s eleven, has been insisting on baking, so I’ve had to supervise. We make simple cakes and muffins, anything with the standard tools and ingredients that fit into our small space. I’m also cooking more because we’re trying to limit our takeout during the pandemic, so I’m actually making a lot of the Pakistani dishes mentioned in A Place at the Table. They’re mostly easy to make even with little experience, so I hope our readers try them out as well. (Note: Additional recipes from the book are available at Laura’s website.)

In addition to the food, we also enjoyed writing some important scenes in the book. I think mine was the Halloween scene, where Sara is upset at the unfairness of not being allowed to go trick or treating like all her friends. This is such a typical Muslim kid experience, and I really wanted to showcase it in all its glory in the book.

There’s a dark moment later in the book where Elizabeth refuses to go to school for several days. This was one of my favorite parts to write because I was school phobic and missed much of my junior year of high school. It’s not something I’ve written or even talked about, so it was cathartic to describe what that feels like from Elizabeth’s point of view. Just like Elizabeth, I spent a lot of time on those “I can’t go to school” days reading.

I am almost done with Guadalupe Garcia McCall’s YA novel Shame the Stars. It is a Romeo and Juliet retelling set in 1915 Texas. The main characters’ families are caught between the Mexican revolution and vigilante Texas Rangers. It’s a piece of history I didn’t know much about, yet the story connects with what American citizens of color are facing in today’s America.

I’m reading Once upon an Eid, a middle grade anthology by Muslim creatives. It’s so wonderful to see a Muslim festival celebrated in mainstream kidlit. It includes not only short stories but also poems and art, all showcasing the variety of ways Eid is celebrated by Muslims across the world.

A Place at the Table hits shelves on August 11, 2020. Catch Saadia Faruqi and Laura Shovan at any of their upcoming virtual events: 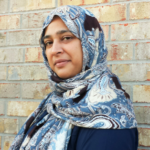 Saadia Faruqi is a Pakistani American author, essayist and interfaith activist. Her book Meet Yasmin!, the first book in an early reader series about a Pakistani-American girl, received starred reviews, and she is also author of the adult fiction book Brick Walls: Tales of Hope & Courage from Pakistan. She lives with her husband and children in Houston, Texas, where she is editor-in-chief of Blue Minaret, a magazine for Muslim art, poetry, and prose.

Laura Shovan‘s debut middle-grade novel, The Last Fifth Grade of Emerson Elementary, was a NCTE 2017 Notable Verse Novel, a Bank Street College of Education Best Children’s Book of the year, and won a Cybils Award for poetry, among other recognition. Her second children’s novel, Takedown, published recently and her novels sit on over half a dozen state reading lists. She lives with her family in Maryland, where she is a longtime poet-in-the-schools for the Maryland State Arts Council.

Previous Post: « Jewish Readers Deserve to See Themselves Outside of the Holocaust and Holidays
Next Post: How to Become a Writer (Of Color) »