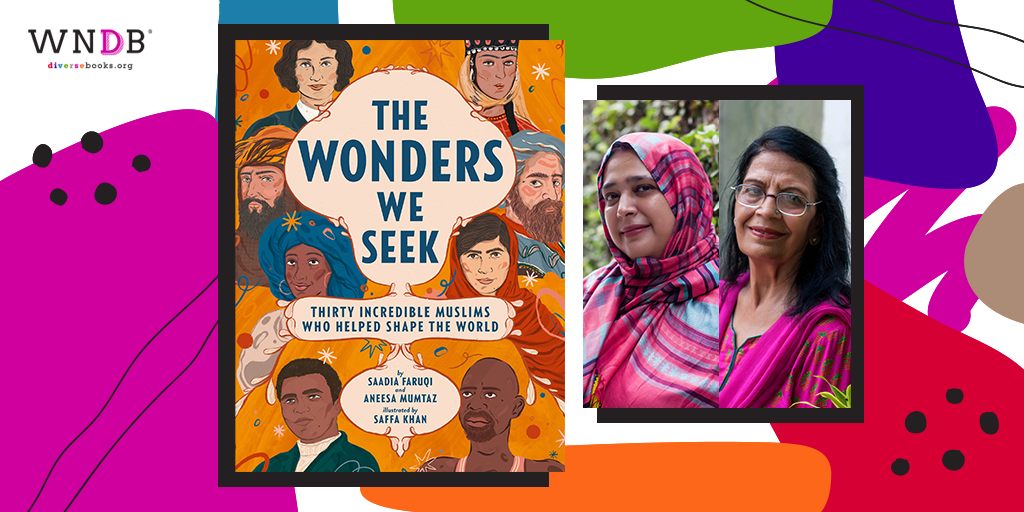 Today we’re pleased to welcome Saadia Faruqi and Aneesa Mumtaz to the WNDB blog to discuss their middle grade nonfiction book The Wonders We Seek: Thirty Incredible Muslims Who Helped Shape the World, out today, June 7, 2022!

In this biographical collection, with stunning portraits and illustrations by Saffa Khan, authors Saadia Faruqi and Aneesa Mumtaz highlight some of the talented Muslim physicians, musicians, athletes, poets, and more who helped make the world we know today.

A brilliant surgeon heals patients in the first millennium.

A poet pours his joy and grief into the world’s best-selling verses.

And many, many more.

Throughout history—from the golden age of the empires of Arabia, Iraq, Persia, and India, up to modern day—Muslims have shaped our world in essential ways, with achievements in music, medicine, politics, human rights, literature, sports, technology, and more. Give this book to readers who are excited to learn about the great figures and thinkers in history!

The authors introduce their book with a personal letter to the reader, setting out their motivations and hopes for the stories they are telling. The backmatter includes a glossary and bibliography for readers’ further research and learning. 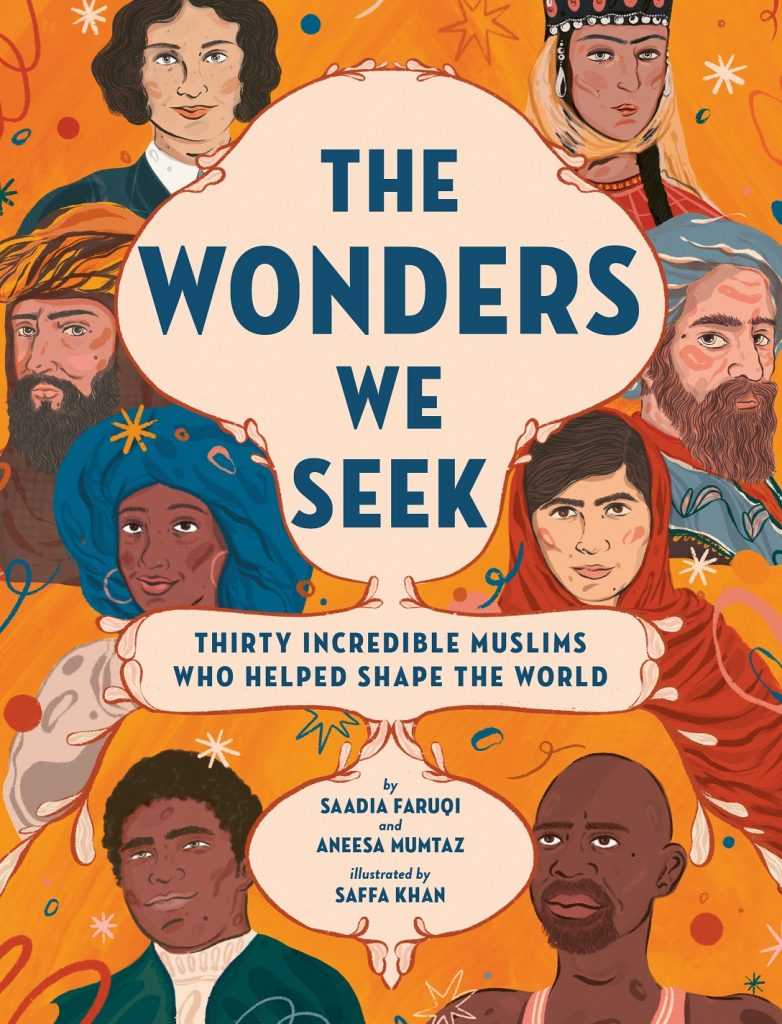 Aneesa and Saadia, thank you so much for your time to do this interview. I feel your collaboration to write this book as mother and daughter is a special one. What compelled you to co-author this book together?

Saadia: My mother Aneesa Mumtaz had recently emigrated to the U.S. after a busy and fulfilling career as an educator and teacher trainer. When I started writing The Wonders We Seek, I jumped at the chance to include her extensive experience in writing, teaching and student engagement to make sure this book met all my goals.

Aneesa: Writing a book was least on my mind when I first came to the U.S. When Saadia offered me the opportunity to co-author a biography collection, I took up the offer as something to do. As I got deeper into the project, however, I discovered the talents of innumerable Muslims from different eras and areas of the world, who have played an important role in making us what we are today.

How did you agree on the title of your book?

Authors: The original title of our manuscript was Great Muslim Minds, but after some thought, our editorial team decided we needed something more joyous and indicative of the myriad positive contributions Muslims have made over time. Since Rumi is one of the personalities highlighted in the book, we decided to chose a quote from one of his poems as a way to honor him and all the other Muslims in these pages.

What criterion did you use to select the thirty Muslims? How did you strike a gender balance? Why thirty individuals—how did you both come to this number?

Authors: The note in the beginning of the book explains our selection criteria. We chose personalities who professed to be Muslim (as opposed to how society viewed them), were the first or the best at something, or had made contributions that affected a large part of the world instead of their home country alone. Unfortunately, this meant many amazing people had to be left out, if their reach was national instead of international. We thought thirty was a good number to make a hefty dent in the knowledge of our readers, yet not too many to overwhelm them. Gender balance was trickier, because historically, the contributions of Muslim women have tended to lag behind men, whether through a lack of opportunity or reporting. We did try our best to vary based on gender, nationality, industry and time period.

How do you feel your book supports the neurological development of middle schoolers? Why did you choose to write this book for middle grade students?

Saadia: I’ve been writing books for this age group for the last several years, and felt the need for a biographical collection for my readers when I saw the lack of current resources related to Muslims. My mission of adequate representation of Muslims in children’s books naturally led to The Wonders We Seek. Middle school students are always eager to learn and absorb new information, as well as shatter stereotypes. They’re the perfect age to be inspired through stories of real people who made a difference.

What is your message to teachers on how and why they could/should integrate this book in their classrooms?

Aneesa: The main goal of this book is to inspire and motivate students of marginalized backgrounds, while at the same time setting the record straight about contributions that may have historically been forgotten. Teachers can use this book as a meaningful resource for historical research, as well as while discussing subjects like science, history, math and so forth. Our hope is that The Wonders We Seek will arouse students’ curiosity to explore the contents and not just the topic they are researching. 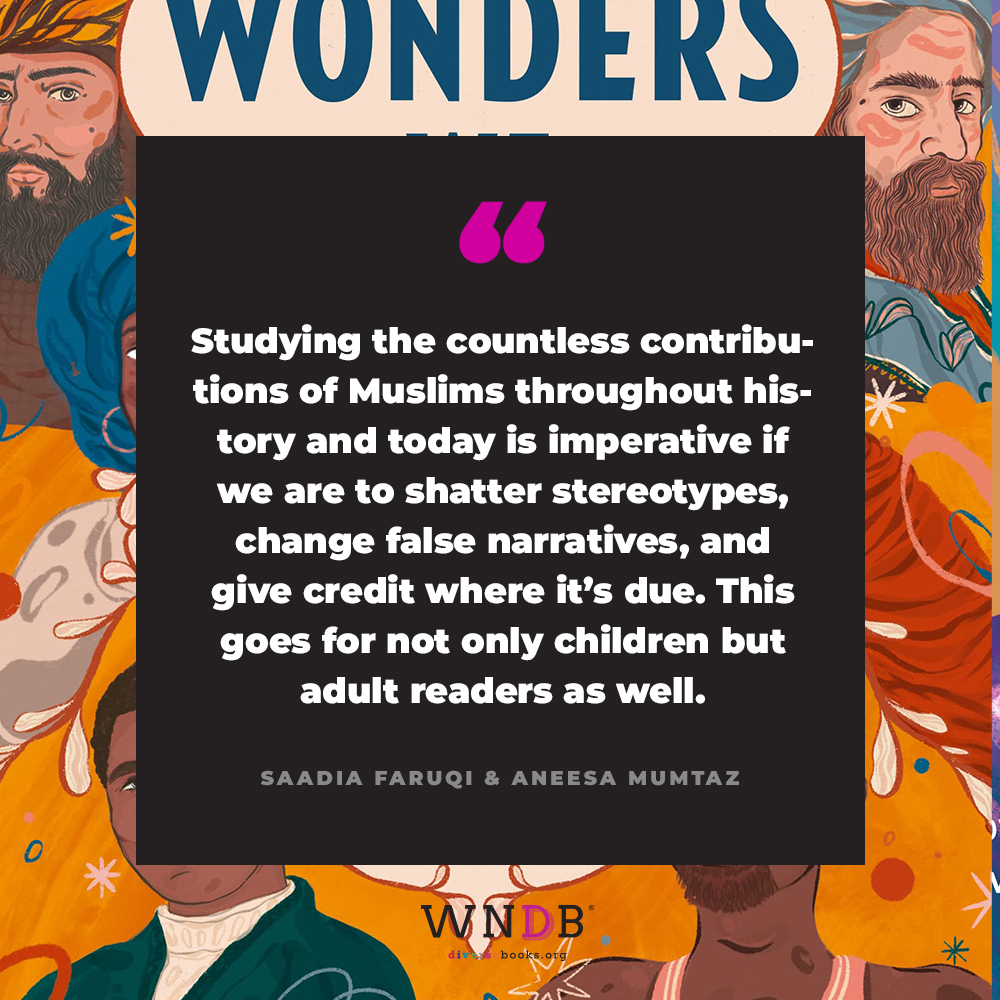 If you were to pick one historical figure from your book, The Wonders We Seek, who would it be and why?

Aneesa: My choice would be the physicist Dr. Abdus Salaam. He was born in a village without a proper school, yet his thirst for knowledge took him to the topmost educational institutes both as student and teacher. His education and his religious faith together led him to the Nobel prize, and beyond. As both a Muslim and a Pakistani I’m incredibly proud of him.

Saadia: I’d go with Razia Sultan, the female king of ancient India. While her reign was short, she was an incredible woman who knocked down barriers and shattered stereotypes from the time she was born. I often think of her when I feel constrained by patriarchal society or reach seemingly insurmountable barriers. The question “what would Razia do?” often lends the right motivation to move forward.

Saadia, you’ve mentioned many times in other interviews and on your website that along with being an author you are an “interfaith activist”. Aneesa, you are an educator as well as an academic writer. How did you both complement each other during the writing process of this book?

Authors: We both brought our strengths to the writing table! Interfaith dialogue helps view things from a unique perspective, which was definitely helpful in crafting this book. At the same time, an educational background was required to make sure we were including everything students would find beneficial.

While writing this book together, what are some realisations you had on the ethics of writing about historical figures?

Authors: One of the most important lessons we learned was to take feelings out of the process of biography writing. We had to include people whose political or social beliefs we didn’t agree with, as well as controversial figures who did harm as well as good. For us, the ethics of writing about these figures meant not shying away from their negative aspects, but also making sure their positive aspects were included. Another important aspect was to check all facts about a personality before making sure they were included. This meant going beyond surface articles and social media profiles, to dig into academic resources for truthful portrayals.

What was an early experience where you learned that language had power?

Aneesa: As an educator and a teacher trainer, I discovered early in my career that “language” is multi-dimensional. Not everyone expresses him/herself with words. People express themselves in different ways and each one is as powerful as any other. We see this from the personalities included in The Wonders We Seek.

Saadia: I discovered the power of words as a high school student studying Shakespeare’s plays. I saw how he crafted complicated situations that inspired all sorts of emotions in his readers. That’s the reason I became a writer myself, to be able to have that sort of intense reaction in my readers.

Do you have any additional thoughts you would like to share with the readers of We Need Diverse Books?

Authors: Studying the countless contributions of Muslims throughout history and today is imperative if we are to shatter stereotypes, change false narratives, and give credit where it’s due. This goes for not only children but adult readers as well. We hope that The Wonders We Seek will give rise to a generation of readers who will question how history is taught, and who gets written about. 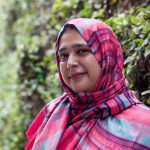 Saadia Faruqi is a Pakistani American author, essayist and interfaith activist. She writes the children’s early reader series “Yasmin” and other books for children, including middle grade novels “A Place At The Table” co-written with Laura Shovan (a Sydney Taylor Notable 2021), and “A Thousand Questions” (a South Asia Book Award Honor 2021). Her new book “Yusuf Azeem Is Not A Hero” details the experiences of the Muslim American community twenty years after 9/11. Saadia is editor-in-chief of Blue Minaret, a magazine for Muslim art, poetry and prose, and was featured in Oprah Magazine in 2017 as a woman making a difference in her community. She lives in Houston, TX with her husband and children. 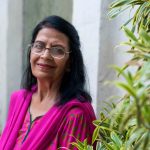 Aneesa Mumtaz is a Pakistani American educator and academic writer. She served as the principal of St. Patrick’s College of Education in Karachi and is a founding member of the Society of Pakistani English Language Teachers (SPELT). Aneesa now lives in Michigan with her family. 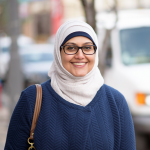 Yasmine Aslam-Hashmi is an international educator who is passionate about inclusive education. She has taught various age groups from primary all the way up to Grade 12. She is a trained teacher in Special Education, English as an Additional Language, Geography, Science, and an International Baccalaureate Theory of Knowledge Teacher. Yasmine strives to advocate for inclusive practices, promotes and supports diversity, and speaks up for injustices no matter how small they may be. She’s a Canadian at heart, born in London, England, but a global traveler who has lived in the Middle East and the US. She currently resides in Switzerland.

Previous Post: « Q&A With Christina Soontornvat and Rahele Jomepour Bell, To Change a Planet
Next Post: Q&A With Gita Varadarajan & Archana Sreenivasan, My Bindi »
We've got new #BooksSaveLives swag in the WNDB Bon