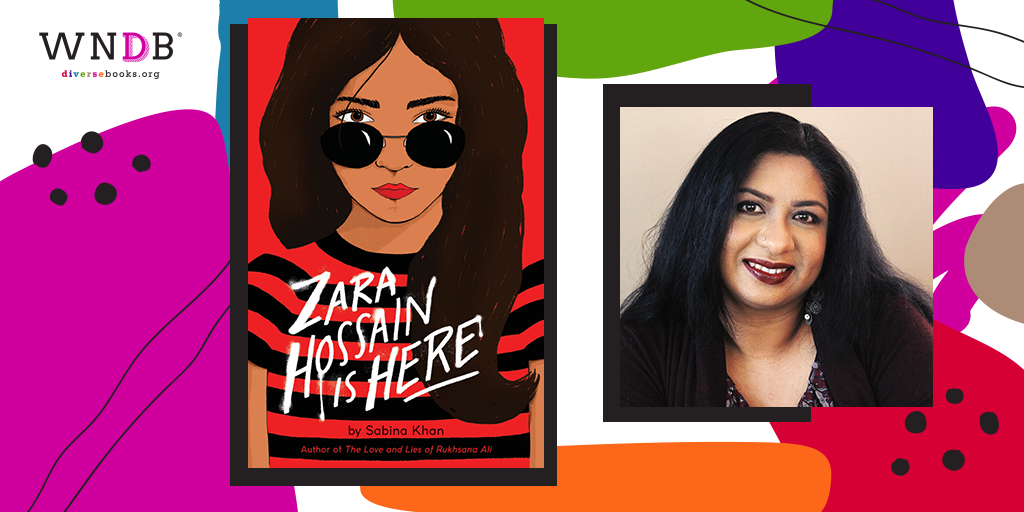 Today we’re pleased to welcome Sabina Khan to the WNDB blog to discuss her young adult novel Zara Hossain Is Here, out April 6, 2021!

Zara’s family has waited years for their visa process to be finalized so that they can officially become US citizens. But it only takes one moment for that dream to come crashing down around them.

Seventeen-year-old Pakistani immigrant, Zara Hossain, has been leading a fairly typical life in Corpus Christi, Texas, since her family moved there for her father to work as a pediatrician. While dealing with the Islamophobia that she faces at school, Zara has to lay low, trying not to stir up any trouble and jeopardize their family’s dependent visa status while they await their green card approval, which has been in process for almost nine years.

But one day her tormentor, star football player Tyler Benson, takes things too far, leaving a threatening note in her locker, and gets suspended. As an act of revenge against her for speaking out, Tyler and his friends vandalize Zara’s house with racist graffiti, leading to a violent crime that puts Zara’s entire future at risk. Now she must pay the ultimate price and choose between fighting to stay in the only place she’s ever called home or losing the life she loves and everyone in it.

From the author of the “heart-wrenching yet hopeful” (Samira Ahmed) novel, The Love and Lies of Rukhsana Ali, comes a timely, intimate look at what it means to be an immigrant in America today, and the endurance of hope and faith in the face of hate. 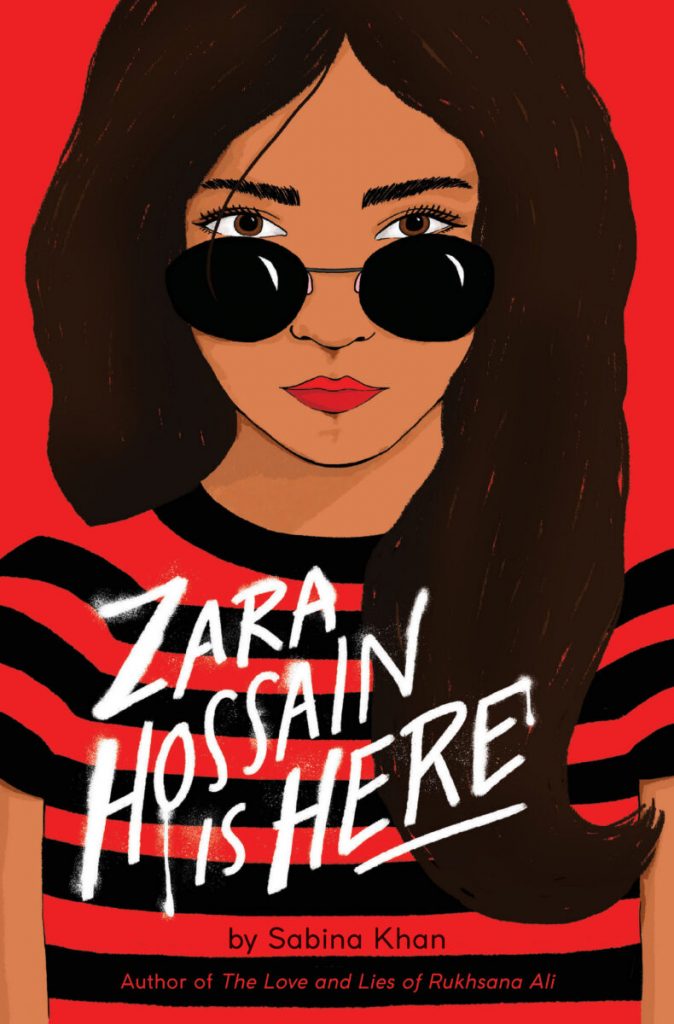 Zara Hossain Is Here is strongly about family, found family, and community, all of which were addressed in The Love & Lies of Rukhsana Ali too. Why did you want to return to these themes in Zara’s journey, and how was writing Zara’s exploration different from Rukhsana’s?

There are so many variations of these recurring themes in our lives and the stories we tell. I believe that exploring them through our characters’ journeys is the best way to show that no culture or community is a monolith and that there are countless ways in which we connect and interact with our families, found families, and communities. Rukhsana has to fight against her own family and friends to carve out a space where she can live her truth. Zara has an abundance of support from the people she loves but she has to fight against a system that is in all ways stacked against individuals like her. In my own life, I’ve experienced a lot of what both of these characters face and I wrote these stories as a way to give hope to readers who might need it.

This book also tackles the unfair, often discriminatory system that immigrants have to deal with, and how one tiny mistake can be detrimental. Why did you want to explore that, and why with Zara as a protagonist?

I decided to write this book because of my own harrowing experience with the US immigration system. I know firsthand how fragile an immigrant’s status in the US can be, no matter how carefully all the rules are followed. And I’ve lived through the consequences of having my life uprooted, of having to start all over and watching my dreams crumble around me. It’s not something I would wish on anyone. I think in a way I wanted to rewrite my own experience and my reaction to it. Zara is heavily inspired by my own daughters, who were very young when we left the US for Canada, but who would fight back if they found themselves in such a situation. I wanted to create a character who pushes back against all odds and refuses to give up in the face of prejudice; someone who knows her place in the world and is willing and able to fight for her right to remain there.

What have you learned since publishing The Love & Lies of Rukhsana Ali? How did that impact your process for this book?

With The Love & Lies of Rukhsana Ali, I was somewhat fearful of writing about the sensitive topics it deals with. I was afraid of how readers would respond, and what I learned in the months that followed was that there will always be people who will take issue with some aspect of it. There were negative comments on the way the Bengali characters spoke English, the way Rukhsana was willing to forgive her parents, the many descriptions of food, how I wasn’t a real Muslim. But then there were also many heartfelt messages from queer Muslim teens who reached out to thank me for writing this book and to tell me that this was their story. That’s what I decided to focus on, and when I wrote Zara Hossain Is Here, it was liberating to just write the story I wanted to tell, to describe all the anger and frustration, as well as the joys and triumphs I’ve experienced as a brown woman, an immigrant, and a mother.

Are you typically a plotter or a panster? Did that change when you wrote Zara Hossain?

I don’t know if I can use the word typical yet. Maybe after I’ve written a few more books… I wrote the first draft of The Love & Lies of Rukhsana Ali in a sort of desperate, feverish process, ten to twelve hours a day in sixteen days. That was fuelled by a fear that time was running out and that there was no place for such a story in mainstream publishing. Sometimes I’m shocked to realize that it was just five years ago. With Zara Hossain Is Here it was definitely a much calmer, more organized process, and I think I fall somewhere between being a pantser and a plotter. But the fear that time is running out and that there are so many more stories left to tell will never leave me and I’ve decided to use that as a motivator rather than letting it hold me back. 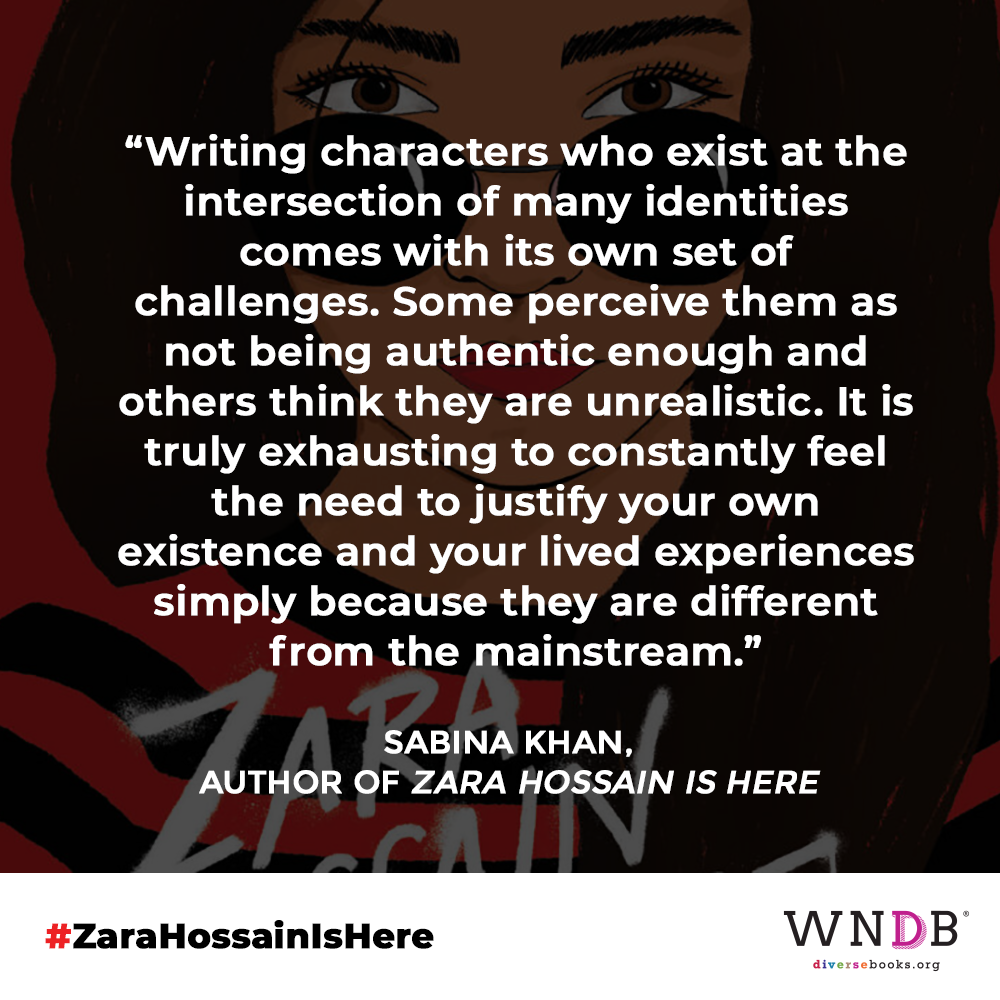 If you could come up with your dream panel to promote this book, what would it be about? What other authors might you want to have on it with you?

My dream panel would be one where we discuss how our craft is influenced by the responsibilities of representation. When I write, I try to be very mindful of how my words will affect readers, how my community will be perceived and if my writing will cause any harm. I have to be cautious and aware that my words may be taken out of context to further villainize members of my community. At the same time, I want to be able to tell my stories authentically and without fear of backlash. It’s definitely a balancing act and I would love to hear how other authors of color deal with this and what their experiences have been.

Some authors I would love to be on this panel with are Aisha Saeed, Aida Salazar, Nafiza Azad, Jenny Torrez Sanchez, and Kelly Yang, just to name a few.

Do you have any recommendations for published or forthcoming books, particularly YA?

These are just some of the book I would like to recommend:

We Are Not From Here by Jenny Torres Sanchez

Q: What is it really like to write stories about characters who share my background and experiences?

A: It’s a mix of joy, relief, and resentment. Joy for all the readers who finally get to see themselves in stories that reflect their lived experiences. Relief that in the last few years no one has told me there’s no place for stories like mine. Resentment that there are still too many who think that writers like me are lucky that diversity is trending right now, who are angry because they feel their piece of the pie is getting smaller, who think any success we experience is not because of any talent we possess.

Writing characters who exist at the intersection of many identities comes with its own set of challenges. Some perceive them as not being authentic enough and others think they are unrealistic. It is truly exhausting to constantly feel the need to justify your own existence and your lived experiences simply because they are different from the mainstream. 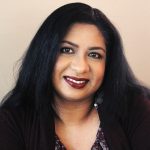 Sabina Khan writes about Muslim teens who straddle cultures. She was born in Germany, spent her teens in Bangladesh, and lived in Macao, Illinois, and Texas before settling down in British Columbia with her husband, two daughters, and the best puppy in the world. Visit her online at sabina-khan.com.

Alaina (Lavoie) is the communications manager of We Need Diverse Books. She also teaches in the graduate department of Writing, Literature, and Publishing at Emerson College and is a book reviewer for Booklist. She received a 2017 Bookbuilders of Boston scholarship for her work in the publishing industry. Her writing has been published in New York Times, Teen Vogue, Cosmopolitan, Refinery29, Allure, Healthline, Glamour, The Oprah Magazine, and more. She currently lives in Boston with her wife and their two literary cats. Follow her @AlainasKeys on Instagram and Twitter.bi