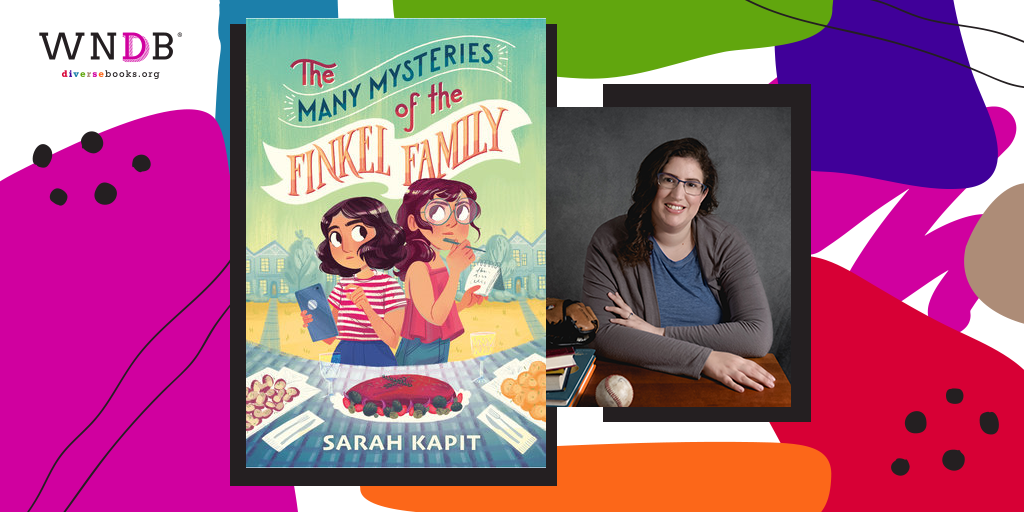 Today we’re pleased to welcome Sarah Kapit to the WNDB blog to discuss her middle grade novel The Many Mysteries of the Finkel Family, out March 23, 2021! 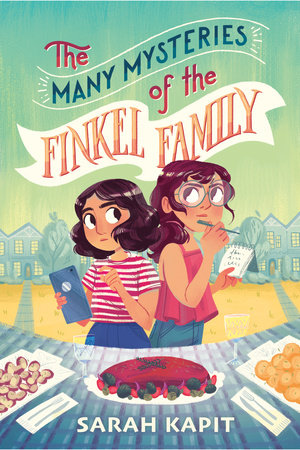 Fans of the Penderwicks and the Vanderbeekers, meet the Finkel family in this middle grade novel about two autistic sisters, their detective agency, and life’s most consequential mysteries.

When twelve-year-old Lara Finkel starts her very own detective agency, FIASCCO (Finkel Investigation Agency Solving Consequential Crimes Only), she does not want her sister, Caroline, involved. She and Caroline don’t have to do everything together. But Caroline won’t give up, and when she brings Lara the firm’s first mystery, Lara relents, and the questions start piling up.

But Lara and Caroline’s truce doesn’t last for long. Caroline normally uses her tablet to talk, but now she’s busily texting a new friend. Lara can’t figure out what the two of them are up to, but it can’t be good. And Caroline doesn’t like Lara’s snooping—she’s supposed to be solving other people’s crimes, not spying on Caroline! As FIASCCO and the Finkel family mysteries spin out of control, can Caroline and Lara find a way to be friends again?

Books about child detectives seem to have such a universal resonance. Why did you want to explore this in The Many Mysteries of the Finkel Family?

I loved Harriet the Spy as a child, and I fully believe that she was an (undiagnosed) autistic character. To me, there’s just something so relatable about watching other people, but maybe not always participating in social interactions in the same way as others. These stories are interesting because detectives are concerned with finding the truth above all else—but oftentimes the truth is difficult and messy and bringing up secrets can hurt people. And, of course, writing things down is always perilous. Like Harriet, one of my protagonists (Lara Finkel) figures that out.

I don’t think I consciously realized this while I was writing, but there is also a very lengthy literary and pop culture of autistic-coded detectives. Unfortunately, most of these detective characters are very thin and stereotyped depictions of autistic people. By presenting an autistic detective character who is kind of bad at being a detective, I think I played with this trope in a fun and unexpected way.

Your two main characters, Caroline and Lara, are sisters and both are autistic. What was it like writing their relationship? Do you have any favorite scenes between the two of them?

I have a sister, so I drew heavily on that—although my sister and I are very different from Lara and Caroline in a lot of ways. Their being autistic shapes their relationship, and in some ways, they’re closer because they can understand each other. At the same time, a lot of the issues they face are pretty typical of all siblings. Lara feels that she should be in charge, as the big sister, and Caroline has her own ideas about how things should work. (Something my own sister said helped me to solidify Caroline’s motivations—I am the older one!) Additionally, both girls can’t help but compare themselves to each other and their other siblings. I think so many kids struggle with that.

There are so many moments between the two of them that I love, but one that stands out comes early in the book. Lara shows Caroline their middle school, and they walk by Lara’s favorite tree. Lara explains that she likes to go to her tree when she gets overwhelmed, and Caroline asks if she can go to the tree, too. Although Lara is initially taken aback because it is her tree, she tells Caroline that if she really, really needs it, Caroline can go to the tree, too. To me, that encapsulates the strength of their bond and understanding of each other.

In addition to the autistic representation, you also mentioned that Lara and Caroline are of mixed Ashkenazi and Sephardic heritage. Why was it important to you to have on-the-page representation for both? Why did you want to include a character who uses AAC (alternative and augmentative communication)?

My grandmother, who I was very close to, was Sephardic. I didn’t grow up with a ton of Sephardic culture (though we did have some), but I am proud to be both Sephardic and Ashkenazi. I think even in the American Jewish community there’s this assumption that everyone is Ashkenazi. I remember going to Hebrew School and the teacher told us, “Almost all of you are probably Ashkenazi.” I asked my parents about it and they said, “Grandma Ray is Sephardic!” It was kind of astonishing to me that someone who taught Hebrew School would be so ignorant about the diversity in our own community.

A lot of Sephardic and Mizrahi Jews end up learning a lot about Ashkenazi culture because it is so much more common among American Jews, but I feel like it’s important to acknowledge that there are multiple Jewish cultures with distinct traditions and languages and everything else. Otherwise, we’re just erasing people. I wanted to show a family like my own, which celebrates multiple Jewish cultures.

I decided to make Caroline an AAC user because there is such a dearth of representation of autistic people who use AAC. Sometimes we see non-speaking autistic people (though usually as side characters), but usually those characters do not use assistive technology. From spending time in the autistic community, I know that using AAC is hardly uncommon, and I wanted to represent that. Since this is outside of my personal experience, I worked with a wonderful sensitivity reader. They were very positive about the representation, but they also gave me some great hints on how to make it more accurate.

Did you do any research for this book, and what was your favorite fact you learned?

I didn’t do a ton of research for this book. I did research Ladino sayings, which was very cool. Ladino is a Sephardic language that combines Hebrew, medieval Spanish, and several other languages like Turkish and Arabic.

Probably my favorite part of the research was learning about low-level pranks that middle school students do to each other. I incorporated that into the book. 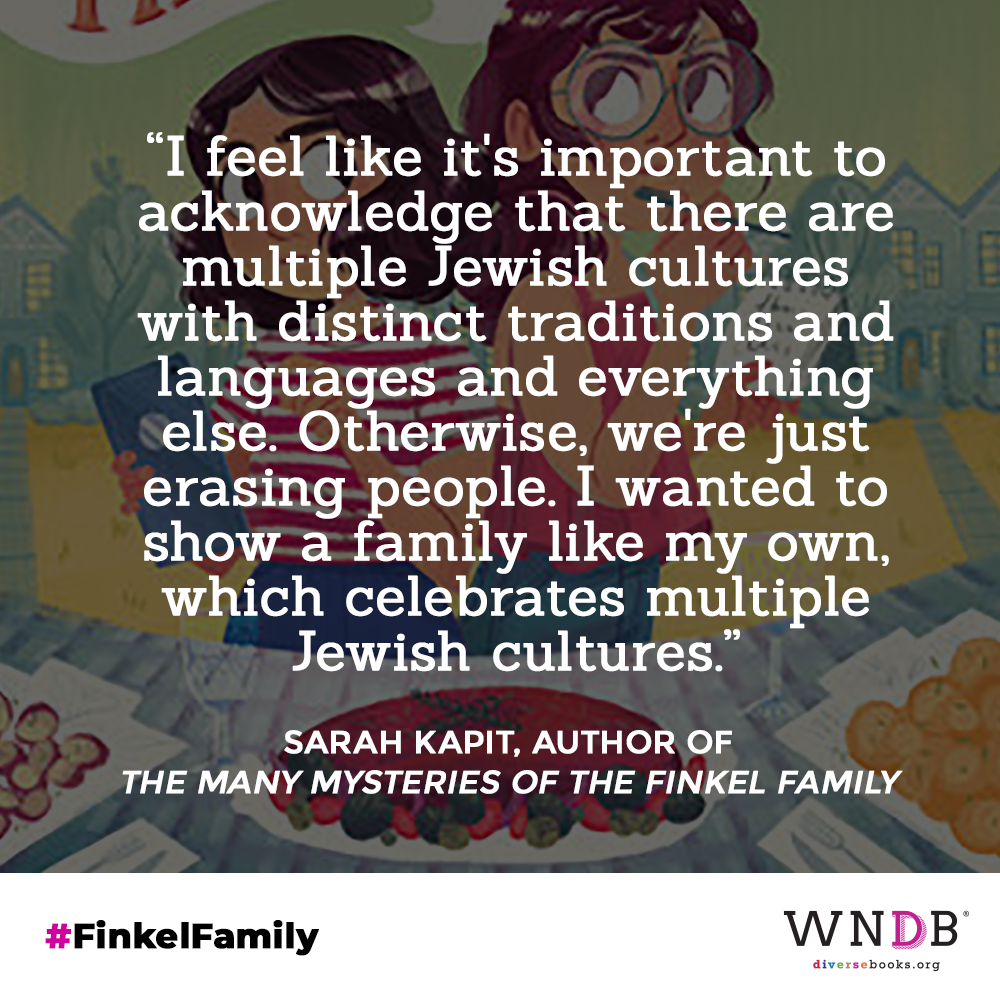 This story is just as much about the struggles of adapting to change when you’re in middle school as it is about actual mysteries. Can you tell us what drew you to this journey for your characters?

I’m a pantser, so I don’t really plan out my stories ahead of time. In fact, when I first started the story it took place in the summer. But I knew that I wanted the Jewish High Holidays (particularly Rosh Hashanah and Yom Kippur) to be a big part of the book, so setting in it the summer didn’t quite work. As I figured out what might cause conflict between the sisters might be, it seemed like starting middle school was ripe with possibilities. For Caroline, this is an exciting time because it gives her a fresh start and introduces her to new people. For Lara, Caroline joining her at middle school upsets the status quo and forces her to figure out a new way to relate to her sister.

If you could be on your dream panel to promote this book, what would it be about? Who are some other authors you’d love to have on it with you?

Well, if I can have a dream panel, I’ll go big and say I’d love to have Judy Blume and Gail Carson Levine. I’d love to talk about Jewish kidlit and all of the complexities that come with writing Jewish characters.

And if I can really, really dream, I’ll take Louise Fitzhugh (author of Harriet the Spy, who died in 1974). With her, I’d love to discuss “unlikeable” girls and their value in literature.

Do you consider yourself a plotter or a pantser? Did you follow that same routine for this book or surprise yourself?

I am definitely a pantser. I’ve tried to be a plotter, but it just doesn’t work for me. This book was no different. For a long time, I had a vague idea of the ending I wanted, but that ended up being lopped off at my editor’s very wise suggestion. I knew that I wanted there to be a major dramatic scene at Rosh Hashanah dinner, and there is, but a lot of the details around that didn’t quite click for a long time.

When you were growing up, did you do any amateur detective work, or did you have another passion you were drawn to?

Definitely not! I preferred to read about detectives. Reading and writing were always my biggest passions. Like Caroline, I also dabbled a little in visual arts.

Do you have any advice for debut MG authors, particularly during a pandemic?

I guess my biggest piece of advice would be to try and let go, as much as you can, of the idea of a perfect book launch. That never really happens, and it especially doesn’t happen during a pandemic. Celebrate the wins and the fact that your book is out there because that is really special.

What other books do you think The Many Mysteries is in conversation with? And do you have any recommendations for recently published or forthcoming books?

When I started writing the book, I consciously thought about middle-grade books with quirky families, like The Penderwicks and The Vanderbeekers. To me, it made sense to write a large, weird family of my own cultural background. So this book is my take on the middle-grade family drama.

One book I always love to recommend for the representation of disabled girls is What Stars Are Made Of by Sarah Allen. It gave me so many feelings.

Some other recent middle-grade favorites: In the Role of Brie Hutchins by Nicole Melleby, The Total Eclipse of Nestor Lopez by Adrianna Cuevas (my critique partner!), Rick by Alex Gino, and Ana on the Edge by A.J. Sass. Right now I’m reading Amari and the Night Brothers by B.B. Alston and loving it.

For upcoming books, I recently read an ARC of This River Has Teeth by Erica Waters (which is YA fantasy) and was blown away.

Wow, this is a really good question! I guess I wish I could talk more often about the holes in Jewish representation and where my work fits into it.

But beyond that, I hope that my work does a good job portraying one flavor of practicing Jews. I think in pop culture we often get the impression that Jews are either ultra-Orthodox or completely secular Seinfeld-type Jews, when in fact many of us are neither. I wrote the Finkels to reflect my personal relationship to Judaism and am really excited to put that out there.

Sarah Kapit is a writer of middle-grade fiction. Currently she lives with her family in Bellevue, Washington. Her first published novel, GET A GRIP, VIVY COHEN! was named a Schneider Family Award Honor title. Another novel, THE MANY MYSTERIES OF THE FINKEL FAMILY, is forthcoming in 2021.

Previous Post: « Unapologetically Asian American
Next Post: Lost in the Never Woods Is a Peter Pan Retelling About Trauma »
Save the date for the #WalterAwards23! You can now