Sharon’s groundbreaking novel The Skin I’m In celebrates its 20th anniversary this year, and the newest edition is out today with a foreword by Jason Reynolds. Over the course of her career, she has spoken to more than two hundred thousand young people, and hugged nearly as many. She has also penned nine novels, numerous short stories, plays, and a picture book entitled You Are Not a Cat. Sharon lives in Pittsburgh, Pennsylvania, and has generously participated in a Q&A for WNDB readers.

Where did your childhood books come from?

My mom and dad read a lot, but mainly newspapers. They read them cover to cover, including the Sunday paper, which seemed like it was hundreds of pages long when I was a kid. I took books out of the public and school library most times.

Tell us about your writing process. Where do you write? Do you outline a project before you start?

Outline? Oh, my no. That would imply that I know where a book is headed, and I never do. Line by line my novels unfold and reveal themselves to me. I follow … a lot … but writing is no passive act. I am well-aware that I am both playing music and being played.

When I wrote The Skin I’m In, my typical writing day began around 4AM and ended at 5:30AM. That schedule lasted about ten years. Now I get up to write between 7 and 8AM. I write five hours, five to six days a week. If I’m under deadline, it may be eight hours or more a day.

I write at home in my study or at the dining room table. During the summer, folks may see me on the patio plugging away. I go to Panera a lot, too. I need folks around me sometimes–even if I don’t talk to them much–and a  big window that lets in tons of sunshine, which is good for my writer’s soul. During most of my career, I could not write and listen to music or the television while I wrote. It was too distracting. Now I can, but I don’t do it very often.

What was the book that had the greatest influence on THE SKIN I’M IN?

The Middle Passage by Charles Johnson. It’s remarkable, brilliant. I read it again and again. I kept asking myself, “Why do you like this book so much?” It was the figurative language, the way he made each word come alive by using metaphors and similes, alliteration, etc. Once I realized this, I went back to work on my novel and upped my game.

I imagine you have received a lot of feedback from readers over the years who have loved THE SKIN I’M IN. Can you share a favorite story about one of those fans? What resonated with them in particular about the book?

I have nearly every letter, drawing, tee shirt, and email any reader has sent to me. One of my favorites is a college essay from a young girl. She had to write about someone or something that had changed her life, influenced her greatly. In her 300-plus-word essay, she discussed  her journey with self esteem. The Skin I’m In changed her life, she wrote. Another young lady in her twenties phoned my home one day. She had read my book as a teen. I had signed it during a school visit and written my phone number in it. “You told me to call you,” she said, “once I write my own book because you wanted to read it.” She lived in Pittsburgh. I invited her to my home, read  and critiqued her picture book, and met her husband. I got a big rush out of that. 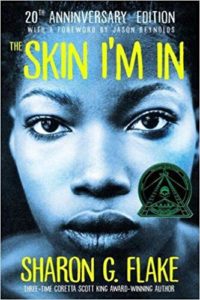 In terms of the publishing industry, how have you seen it change since the publication of THE SKIN I’M IN? How might you hope it will change in the next twenty years?

There were so few African-American authors in this business when I came along. And no matter how well we wrote, there were awards we knew we wouldn’t win, lists we could only dream of being named to. In the last few years, the door has been kicked wide open. Now, the publishing industry didn’t just open the door wider because it was the right thing to do. In many ways the times, people of color and groups like WNDB demanded that it to do so. Nonetheless, children and adolescents are now the beneficiaries of a host of different narratives by and about people who look like them.

For a long time, African-American boys could only rely on a few Black male authors like Walter Dean Myers to tell their truths.  But now they also have Jason Reynolds, Kwame Alexander, Derrick Barnes, and others.  Stories like Pride are being written. Books like Poet X, I Am Alfonso Jones, We Rise, We Resist, We Lift Our Voices, featuring 50 diverse  authors and illustrators, are finding shelf space in major bookstores nationwide.  Novels are making it to the big screen, or at least getting attention from the movie industry. Publishing houses are establishing imprints that reflect the diversity of this nation.

America can be fickle, however. We dive in deep one day and come up for air the next, and forget at times why we went in the pool at all. My hope is that we will stay the course, but speed things up in terms of publishing more African-American authors and illustrators and other diverse groups. There are voices still to be discovered, stories still to be written. As for the future, my hope is that writers won’t compromise their voices and unique outlook on the world once the perks of the industry kick in. We are not all the same, which is the beautiful thing about being human. And we must be able to enjoy one another’s stories even if aren’t in it.

What are you working on now?

I am working on a novel in verse, which is set in the 1930’s. Something has gone horribly wrong in my protagonist’s life, and as a result he hasn’t left the house for years. Yet at night, on the roof, he is fearless.  Building rocket ships and imagining himself on the moon, he has all the tools to save himself. But will he?

Previous Post: « Q&A with Sarah Prager: QUEER, THERE, AND EVERYWHERE
Next Post: Celebrating LGBT History Month with YA & MG Books »