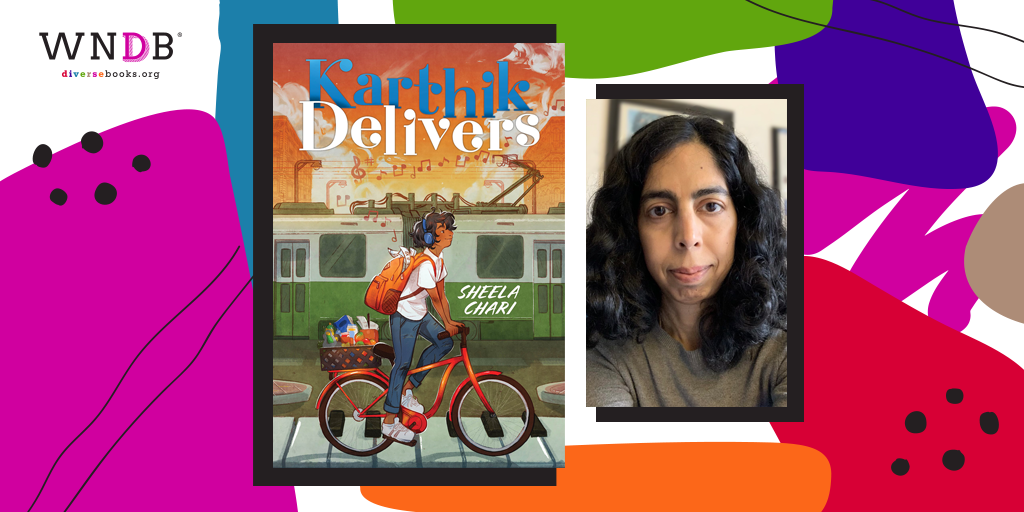 Karthik Raghavan is good at remembering things. Like his bike routes. Or all the reasons he likes Juhi Shah—even if she doesn’t even know he exists. It doesn’t help that she seems to have a crush on his arch nemesis, Jacob Donnell, whose only job is to humiliate Karthik (and get his name wrong). Then Karthik’s luck changes when he secretly agrees to be in a play about the famous musician, Leonard Bernstein. But he can’t tell his parents. The family store is in jeopardy, and they need him delivering groceries on his bike to help save it. His mom is also worried about the Financial Crisis, and she’s convinced that studying hard and staying focused is the only way to succeed. But Karthik is having fun being Lenny. Besides, what if acting is Karthik’s special talent? And what if acting is the one way to catch Juhi Shah’s attention? With all the pressure from his family to succeed, will Karthik be able to really imagine and hope when he’s not sure what will happen next? 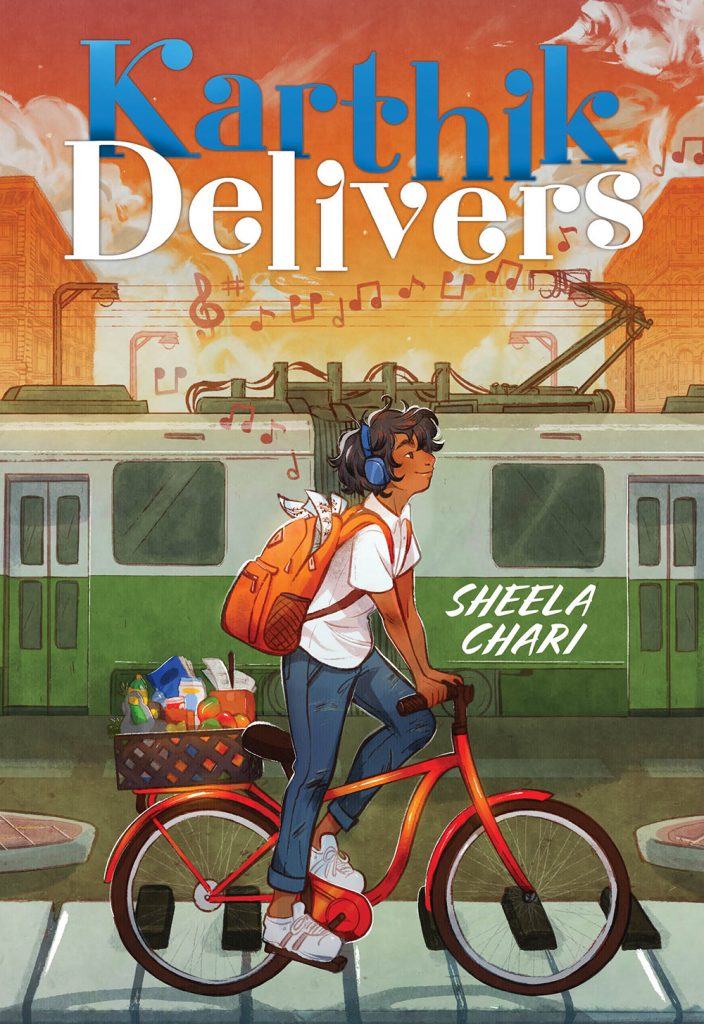 Karthik feels pressure from his parents about what he should do with his life. Navigating this friction and the expectations of his parents is a strong theme throughout the book. What kind of familial pressures might children of immigrants face that other children may not?

When my family moved to the United States in the 1970s, we were part of a wave of immigrants who came like my father did, as professors, doctors, and other professionals. We came with very little money to our name, and had to build from there. Many immigrant families have worked hard to create financial stability, often through achieving academic and professional success. For me and for other children growing up under the shadow of our parents’ hard-work ethic, it felt unimaginable to throw away that security to pursue uncertain careers in writing, acting, or the other arts.

So the pressure Karthik feels stems from the expectations raised by his mom about studying well, but also by his dad in other, unexpected ways. That’s because these pressures aren’t limited to kids! Adults feel them, too. In Karthik Delivers, it was important for me to look at the dreams that Karthik’s parents nurture, while trying to support their family.

What inspired you to include musician Leonard Bernstein (well-known for West Side Story) as part of this book’s plot? What does Leonard represent?

I played the violin growing up, and when Leonard Bernstein passed away in 1990, my orchestra performed excerpts from West Side Story. I had grown up watching this musical on TV, but the experience of playing Bernstein’s music made me appreciate his work all the more—like the brilliant way the notes match the feelings or actions of the characters, or how a song like “One Hand, One Heart” could make me feel so deeply. So I have had a visceral connection to Bernstein’s music since I was young.

But I especially love the story behind Bernstein’s first piano, which becomes the subject of the play in which Karthik gets cast, in the role of the young “Lenny” Bernstein. When Bernstein was about ten years old, he and his family received his Aunt Clara’s piano. From banging on the piano at an early age, Lenny went on to become a star musician. I love this story, because Aunt Clara is the one who sends this “gift” to Lenny, and changes his life. It supports my idea that every day people have the power to change our lives. For Lenny, it’s his Aunt Clara. For Karthik, it’s Shanthi, the girl who asks him to be in her play. Bernstein also grew up in the Boston area, the son of Russian Jewish immigrants. He even lived briefly in Allston, where the book takes place. All these parallels made Bernstein the perfect “foil” for Karthik.

When Karthik is asked to be Leonard in a play, he’s hesitant because he’s Indian and Leonard isn’t. The play’s writer tells him, “So what? We’re all human beings last time I checked.” This is such a simple but immensely powerful statement. How would you like to see the landscape of opportunity change for children of color?

Since I first published more than a decade ago, there has been a sea change as more authors of color and underrepresented backgrounds are publishing to critical acclaim, and are being read in classrooms as well as our own homes. I have to thank WNDB for helping to create this movement that has benefited me as a writer, reader, and parent.

I think acting is another area undergoing transformation. “We’re all human beings last time I checked” IS an extraordinary thing for Shanthi to say. But what does that mean? Can anyone play any role? I think there are two answers to this question, and they are both valid and should be honored.

On the one hand, I would love to see more diverse actors playing roles in diverse stories written specifically for them. In the HBO documentary, East of Main Street, South Asian actor, Aasif Mandvi, makes an impassioned case for not “slotting” an Asian actor into a role that ignores that person’s ethnic, racial, or cultural background. Rather, it would make more sense to create dialogue, relationships, family situations, and even humor around that person’s identity. Otherwise, the casting decision can feel tokenizing.

One of my favorite early movies that illustrates this is Bend It Like Beckham. For me, it was extraordinary to watch a movie about a girl who wants to play soccer competitively. Yet she isn’t any girl, but one growing up in a traditional Sikh household in the UK. That background informs the story, but doesn’t wholly define it. Still, no one but Parminder Nagra could play the role of Jas.

On the other hand, and this is what Shanthi is getting at in Karthik Delivers, it would be equally great to see more Indians and other actors of color have access to all roles, without their ethnicity being a barrier. That was what felt so refreshing about seeing Dev Patel cast as Sir Gawain in The Green Knight.

I would love to see more of both kinds of opportunities become available to actors of color and other underrepresented backgrounds. 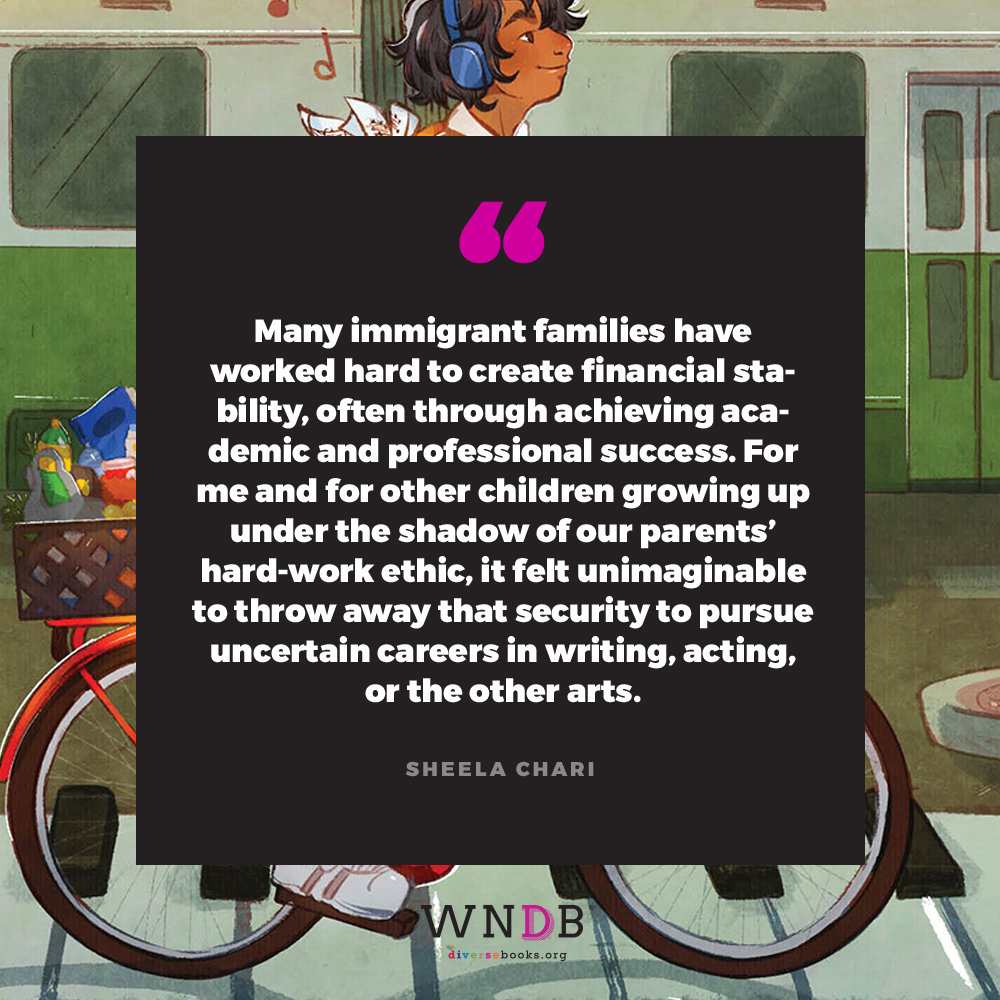 What advice would you give young people interested in writing stories? Is there anything you wish you could go back and tell yourself when you first began writing?

The best advice, which was given to me by my agent, Steven Malk, was that you should take as much time as you need on your debut work. There might be an impatience to get it done and sent out on submission as soon as possible, but that can be to your detriment. Instead, you should take the time to really hone your skills, polish your work, and send out your best. You only have one time to be a debut author.

For those who are just starting out as writers, read widely! It goes without saying that the books you read are the ones that shape your vocabulary, your sense of characters and plot, and help you understand the larger conversation of writing that you wish to join.

I might wish that I had known earlier that I wanted to write for children. But I don’t think anything is ever lost as long as we’re writing. One of my first published short stories in the adult market was told from the point of view of a young girl. I was already on my way!

What’s your writing process like and how do you decide what to work on next?

Usually I’m drawn to an interesting character in an interesting setting, and imagining the obstacles that this character could experience. But I might also have an intriguing first line that comes to me, pulling me forward. Either way, I like to let myself write about fifty pages of a potential project. By the end of those fifty pages, I know if I’m working on something that has promise.

What’s the hardest part of the writing + publishing process for you? The easiest?

The hardest part is the first draft—getting it all down on paper. It’s painful with lots of fits and starts and do-overs. But after that happens and I have the bones of the story completely down, I really do enjoy and savor the process of revision!

What’s next for you? Is there another book coming soon?

The Extradimensional Reappearance of Mars Patel, the third book in the Mars Patel Series, comes out in October! I am also currently working on YA historical that I am very excited about! 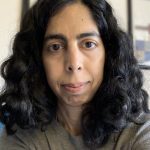 Sheela Chari writes about missing things with humor and heart. She is the author of the humorous upper middle grade novel, Karthik Delivers, and several middle grade mysteries, including The Unexplainable Disappearance of Mars Patel series, based on the Peabody Award-winning podcast; Finding Mighty, a Children’s Choice Award Finalist; and Vanished, an APALA Children’s Literature Honor Book and Edgar finalist for best juvenile mystery. Sheela is a faculty member of the Writing for Children and Young Adults MFA program at Vermont College Fine Arts. She lives in New York. You can find her online at sheelachari.com. 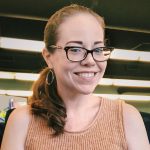 Ashley Wells Ajinkya is a relationship manager in the publishing industry, a We Need Diverse Books blog contributor, and an Ambassador for The Pad Project. She’s also a mental health advocate and public speaker, sharing relatable personal experiences to break down damaging stigmas surrounding disability and mental illness. Ashley loves to travel and enjoys planning trips just as much as hopping on a plane. She can almost always be found with an iced coffee in one hand and a book in the other. You can find her online at entirelyashley.com.

Previous Post: « Q&A With Laekan Zea Kemp, Heartbreak Symphony
Next Post: Q&A With Rachael Lippincott and Alyson Derrick, She Gets the Girl »
Congratulations to the 2023 #ALAYMA winners and ho