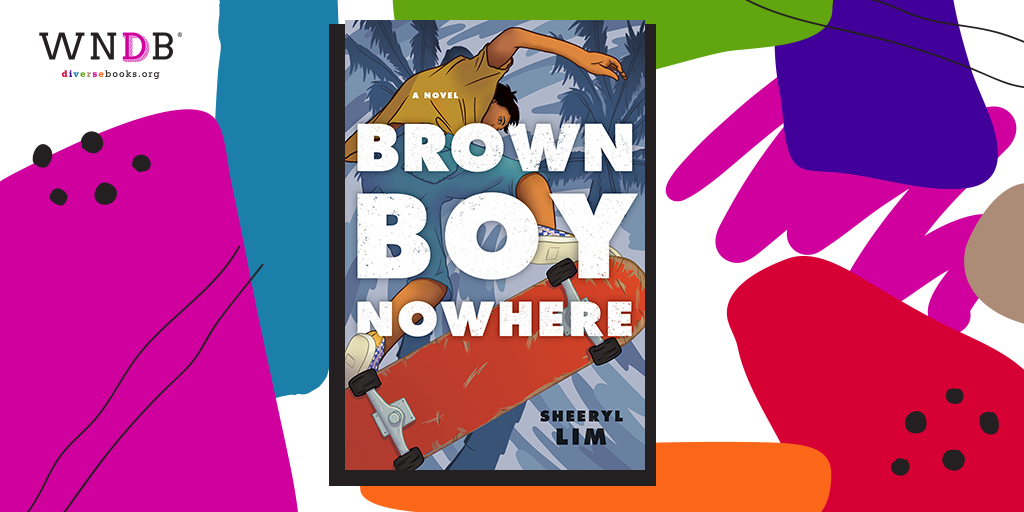 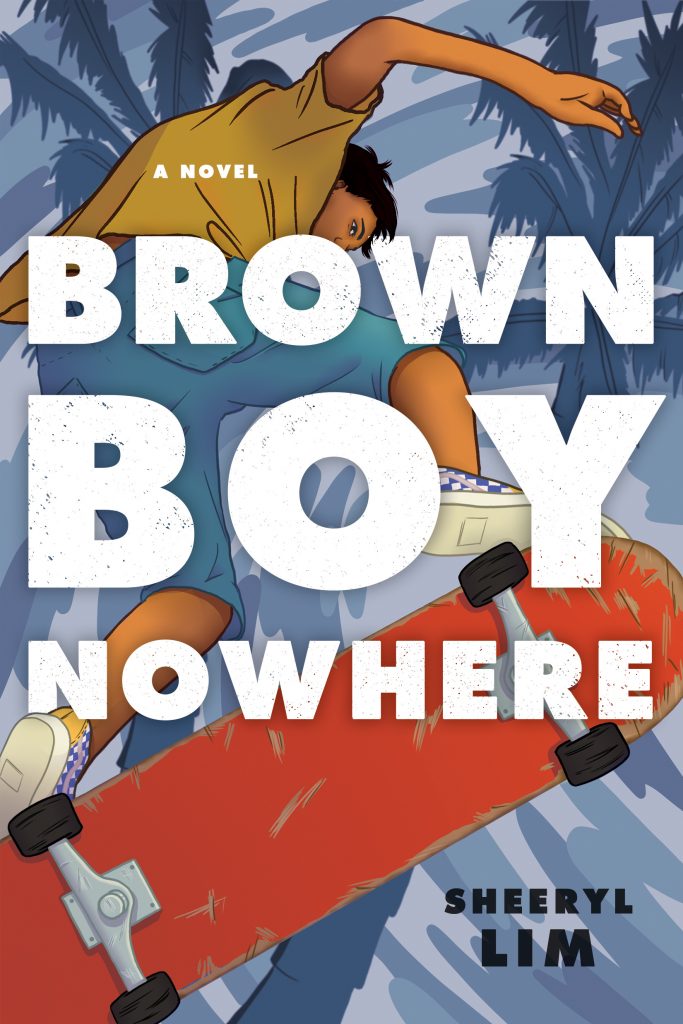 How did you get to the point you are today? What is your background like in terms of culture, academics, etc?

l was actually born in the Philippines. I didn’t move to the States until I was around two and a half. My dad was in the Navy, and so when I was really young we moved around a bit. All my formative years, elementary school, middle school, and then high school, were all in San Diego. I ended up going to College in Norfolk, Virginia and I’ve been in Virginia ever since. Growing up my mom used to always read me bedtime stories, and it was to the point that if she didn’t read one I would completely bug her to read it. I think from then on I always wanted to do something with books. I love drawing, so I was like, “Maybe I’ll be an illustrator or a writer.” When I went through college, I actually majored in psychology. It was one of those things where I wasn’t really sure what I still wanted to be when I grew up. So I graduated with a degree in psychology and in advertising but I still wanted to write so much. And so finally in 2012, I couldn’t take it anymore. I started writing the books that I’ve always wanted to because even throughout high school and college I would always kind of write little stories, never finish them, and just say “I’ll finish it one day.” As soon as 2012 2013 hit, I was just writing story after story. If I’m not writing, I don’t know, it just feels like something’s missing.

It’s great that you follow your passions even after getting a degree in something completely different and continuing to write later. So you ended up in San Diego, which is Angelo’s hometown in the novel! How much of your own lived experiences informed and inspired the events that happened in the book?

I always like putting a little bit of, or sometimes a lot of, myself in my stories. In Brown Boy Nowhere, just things like him skateboarding, hanging out with friends at the beach, going to get their favorite burritos. It was stuff I always loved to do. And also living in California for 10 years and then moving to the East Coast was such a culture shock to me. So I put those feelings of “Am I going to like it here?” “Am I going to be accepted?” All those new, scary feelings that were based on what I felt too.

So Angelo is a skater, did you skate yourself as well?

I longboard! While I was writing the book, just to make sure I got the terminology and everything right, I’d always ask my husband just to fact check because he’s been skating since he was seven and he’s 40 now, so it’s been a long time.

What inspired you to write this story in particular? Why take it into high school and from the younger perspective?

I always loved and still love young adult books. I just feel like that time in your life is so fresh and new and you’re learning so much about yourself. The concept for the book actually came when I was on a mini road trip with my family and my sister’s dog. We were going through a back road kind of area and I remember looking at the setting and just thinking, “Wow, if I moved here, how would I be here?” I was just looking around. It was houses that were completely spread out like in Ocean Point. I was just putting myself in that kind of mindset of “If I lived here, would I like it?” After that, the story just started unfolding in my mind during the road trip. It was inspired also by that feeling of newness that I used to get being in from a military family. Even if you don’t move around a lot, just going to a new job, a new neighborhood, or anything new, there is that kind of anxiety and anticipation of if you will like it. I just kind of built that up and just took some of my experiences, plus the setting we were driving through, and they just meshed!

Wow, inspiration can really come from anywhere! So for Angelo, being brown has a major influence on all of his experiences in the story, but his entire personality doesn’t entirely revolve around being Filipino. Why was it important to you to portray his character in a normal teenage situation, and give him a “normal” teenage life?

Well, growing up there was hardly any representation on TV or in the media about Asians or anyone in the AAPI community. We had a few Asian actors, but they were always in the background and just a few in the foreground. So when I was writing this story, I wanted to portray that we are not just our race or skin color. We have our love stories. We have our normal, you know, everyday experiences that just don’t revolve around being Filipino! Growing up, I always had to marry both cultures. I moved here from the Philippines, and then I had to marry that culture with the American culture. So you’re kind of straddling both lines between both backgrounds. I wanted Angelo to encompass both and how I felt. Growing up, my mom would say, “Oh, this is the Filipino way of doing things.” But then I was doing things the same way my American friends were doing it. 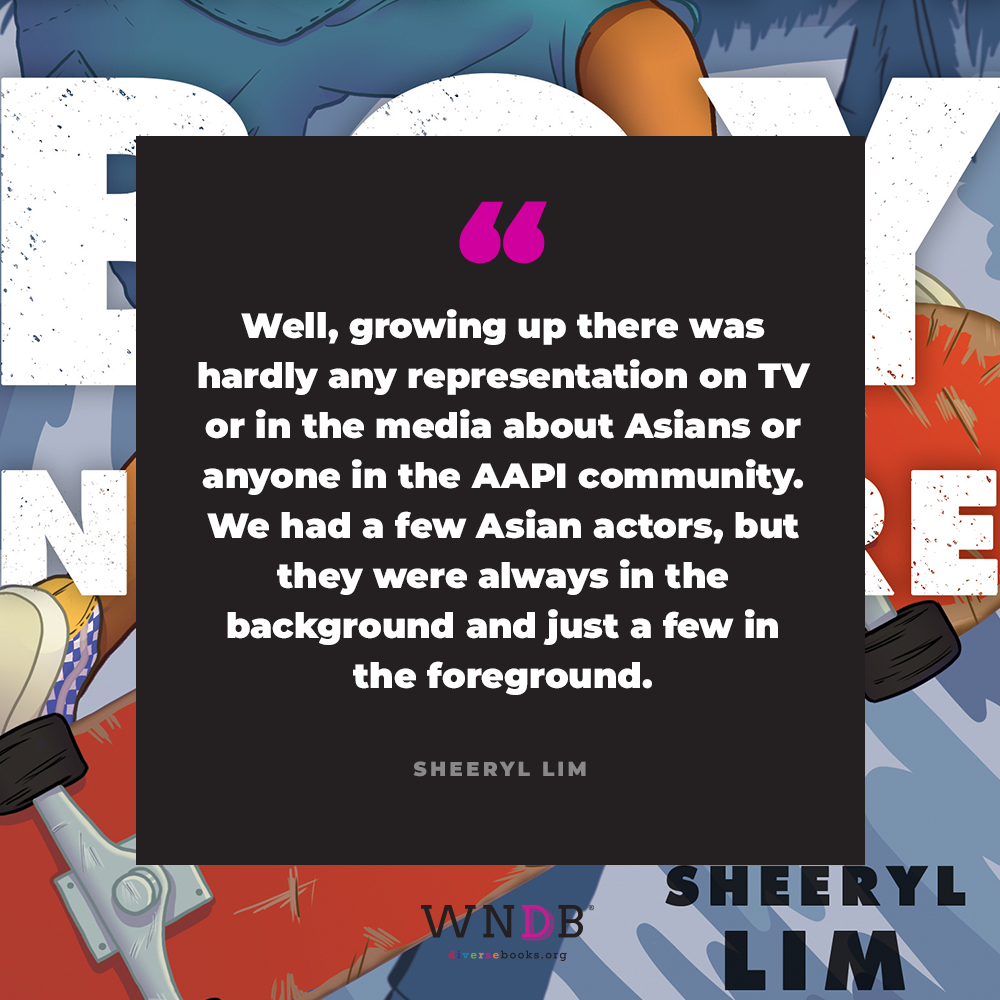 So as a Filipina-American yourself, what would a book like this have done for you, if you had a character like Angelo to read about when you were younger?

Oh, I would have loved it. Growing up I had the Babysitters Club and Claudia Kishi was my girl! She was the Asian in the club, and I just felt like I was seen. I would always try to kind of emulate what everybody else did, and it’s not like I felt like anything was wrong with me but I just felt like I was different. I feel like if I had this book growing up and other representation, I would feel seen and understood and important.

Absolutely. So what kind of impact do you hope that this book will leave on young readers?

Especially with the recent uptick in AAPI violence and hate, I just hope it would help spread awareness on inclusion and just also educate and help cultivate understanding. And of course, my story and Angelo’s story, although it’s for representation, I’m not saying that it fully represents the scope of every individual AAPI experience or the entire community experience. I hope our voices can lend a part in that bigger picture to help educate.

That’s a really great impact for it to have. And hopefully, it does have that! Something else I was wondering about is in the story, you have the students at his high school who are originally racist to him and don’t understand that they were being racist. Why was it important to you to portray that shift in Angelo kind of teaching them about why the things that they were doing were wrong?

I wanted to show the importance of educating, especially those who may not understand. I feel like empathy goes a long way, and so does spreading awareness. I’m a really soft-spoken person. I’ve always been soft-spoken and kind of hide away from conflicts. So I guess vicariously through Angelo, I’m writing what I wish I did when I was younger. When I experienced microaggressions or whatnot I wish I was strong and as confident as Angelo to say back then “You know what?” and “ Well, this is actually how it is, let me help you understand.” Now that I’m older, of course, I’m better at that. But at 17 and 16, if I’m soft-spoken now, it was really so then. It’s my hope that the younger generation can also start speaking up at that age and even younger.

I would say to find their voice. As for me, since I’m soft-spoken, my way to contribute to the Stop Asian Hate movement is writing. So if they can find their voice and somehow find a way to play a part or a role in it, that will help them in their confidence. For me, it was writing. If they want to be a writer as well, I would say just read a lot, read a lot of diverse books especially with the model minority myth, where it kind of hits minority against minority. I think it’s important to be educated about a lot of the diversity in the community. I also want them to know that they are represented, they are important, and regardless of whether they felt different growing up. I felt different, but we are important regardless.

Sheeryl Lim considers herself a bookworm since birth and boasts an unending TBR pile. If she isn’t writing, she’s eating popcorn or playing with her rescue dogs, Roscoe and Nollie. Originally from San Diego, California, the Filipino American author currently resides on the East Coast with her husband and fur babies. For more information, visit www.sheeryllim.com. 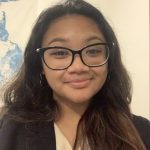 Dhanika Pineda is a Literary Journalism and English student at the University of California, Irvine. She is an aspiring journalist who is passionate about storytelling in a way that is more helpful than harmful, more accurate than trend-worthy, and more honest than persuasive. When she’s not reading and writing for classes, she’s usually still reading and writing for fun. She especially enjoys cultural narratives, poetry, and fantasy. To give her eyes a break from words, she likes to cook, bake, and nap. You can find her on Twitter @DhanikaPineda.