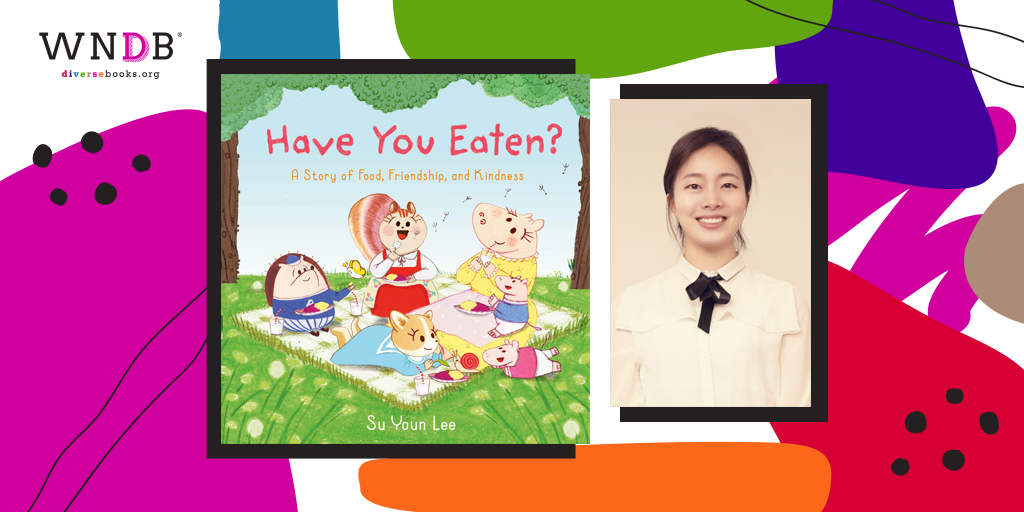 Today we’re pleased to welcome Su Youn Lee to the WNDB blog to discuss Have You Eaten?, out today, April 19, 2022!

A charming, heartfelt picture book debut from Su Youn Lee, Have You Eaten? celebrates one of the many ways we show love, by sharing food.

Coco loved sweet potatoes, and she loved to share them with everyone around her.

Coco the chipmunk is known for asking, “Have you eaten?” and sharing sweet potatoes. The other animals find Coco’s question odd, but one day she shares her food with some animals who could use a friend. When Coco falls ill, her new friends come to care for her in the same way she taught them—by sharing food.

Inspired by a Korean greeting, this heartwarming story offers a fresh take on friendship and kindness. 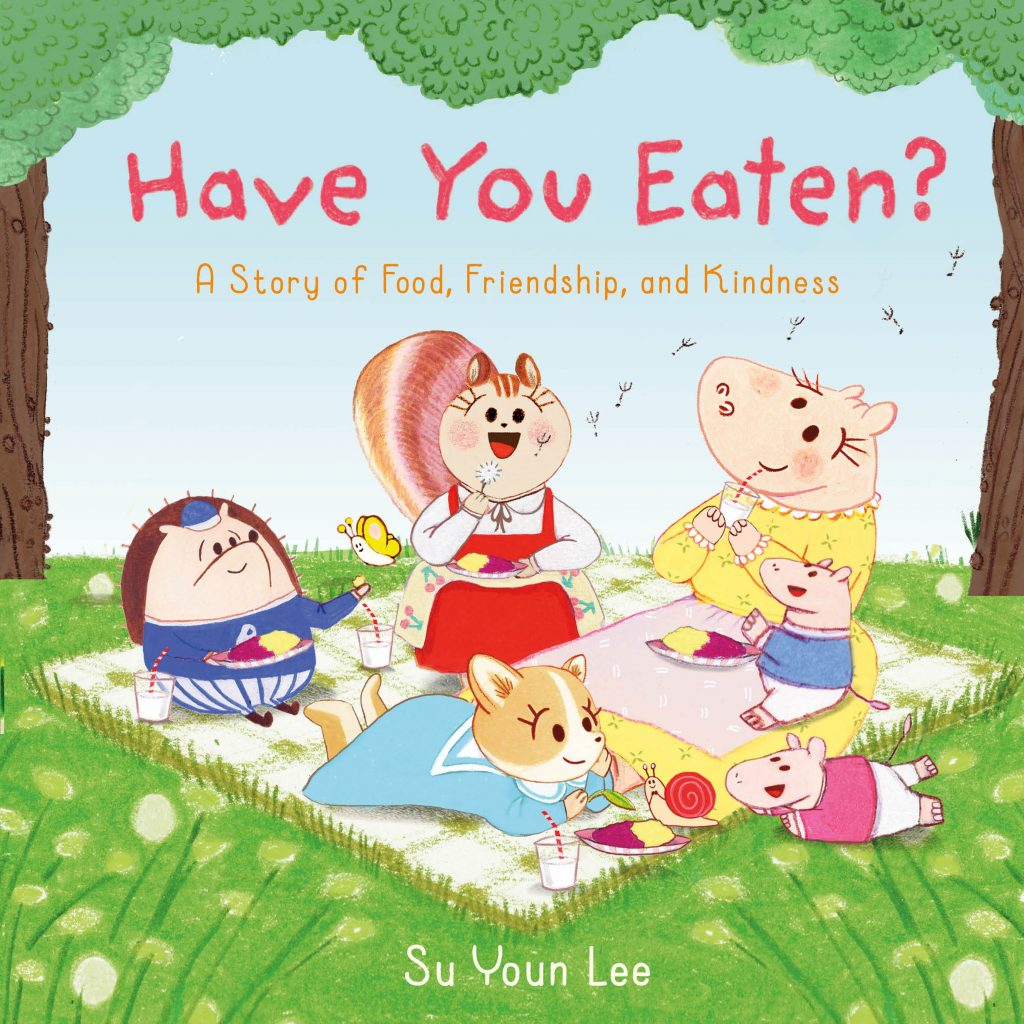 How did you decide on the concept [for Have You Eaten?]?

So I met one woman and she always had a sweet potato in her bag. She is Korean too and she would ask everyone around her, “Have you eaten?” and she feeds everyone. She fed even me! I think that [led] me to write this book. Asking “have you eaten?”—the Korean phrase—it’s a cultural thing, so those combine and happen in this book.

If I understand correctly, your previous books Coco’s Yams and Caroline’s Garden were published by Chicken Bunny, which is yourself, right?

[laughs] Chicken bunny was my character. When I was in [my] MFA we had to make two books and…I just wanted to make my own publisher and publish my own book.

Was there anything from your MFA that was influential in publishing this time?

We had a thesis project and we had to find our thesis advisor who could advise our thesis book and I chose—not a teacher—he’s a picture book author and he’s published a lot of books and he knows a lot of things and we worked together like an editor. We had to meet every two weeks and he helped me a lot. I really love his humor. I think that experience gave me a preview of working with Erin, my editor.

I was really surprised because Aram [did] my same MFA [program]. We never actually [went] to school together but once I met her in [a] Japanese restaurant and it was casual. Because she’s Korean, I wanted to know how she did in school. So I emailed her, “Hi I’m Su Youn, can we talk?” And maybe five years later, in Korea I went to [a] bookstore and there were a bunch of books from America, all English, and one of her books was there and I [sent] a picture [saying], “Oh it’s been so long but I saw your books here” and she said, “Oh thank you!” and two days later I heard that Aram Kim would be my designer! So I was really excited.

What a small world! How did having a team of all Asian or Asian American women working on your book affect the outcome or how you worked on it?

You guys were able to look out for each other.

Yeah, I was really thankful. Because we went to the same school and we had in common the same race. That made me more comfortable. And also Erin.

We are still in a time, here in the US, of increased violence and discrimination against Asian and Asian American people, what role do you want Have You Eaten? to play in that matter, if any?

So after COVID-19 happened, I heard from my friend that they were really, really scar[ed]. She had to push her cap [down] so [people] can’t see [her] face and even the black hair! So I could feel the horror they feel and somehow I was very [relieved] that I was in Korea. I see the news that BTS and Squid Game are [popular]. It makes me think that maybe [Americans’] view might change a little bit from the racism that happened [because of] COVID-19…I think I wish that maybe, slightly, they might [be] interest[ed] in the phrase [“have you eaten?”]. I just hope that they might change a little bit—their view of looking at Asian people [through] the culture.

I hope so! Maybe we’ll find out in April when it comes out!

It’s so soon! I feel like it will come out next year and you just said April and that’s so soon!

How long have you been working on this particular manuscript?

I started last April. The majority was editing and then [the] illustration part was really short. Story is the most important part, I think. That said, illustration is like a decoration. So after I made this book I felt like a movie director. [A] movie director, first they have to make a script and if the story is good, then the good actor would decorate the movie. But at first, because I love making art, I was like, “when am I going to start drawing?” That’s the thing that I really waited [for]. Then I realized it’s really important to build the story first. So I learned a lot. 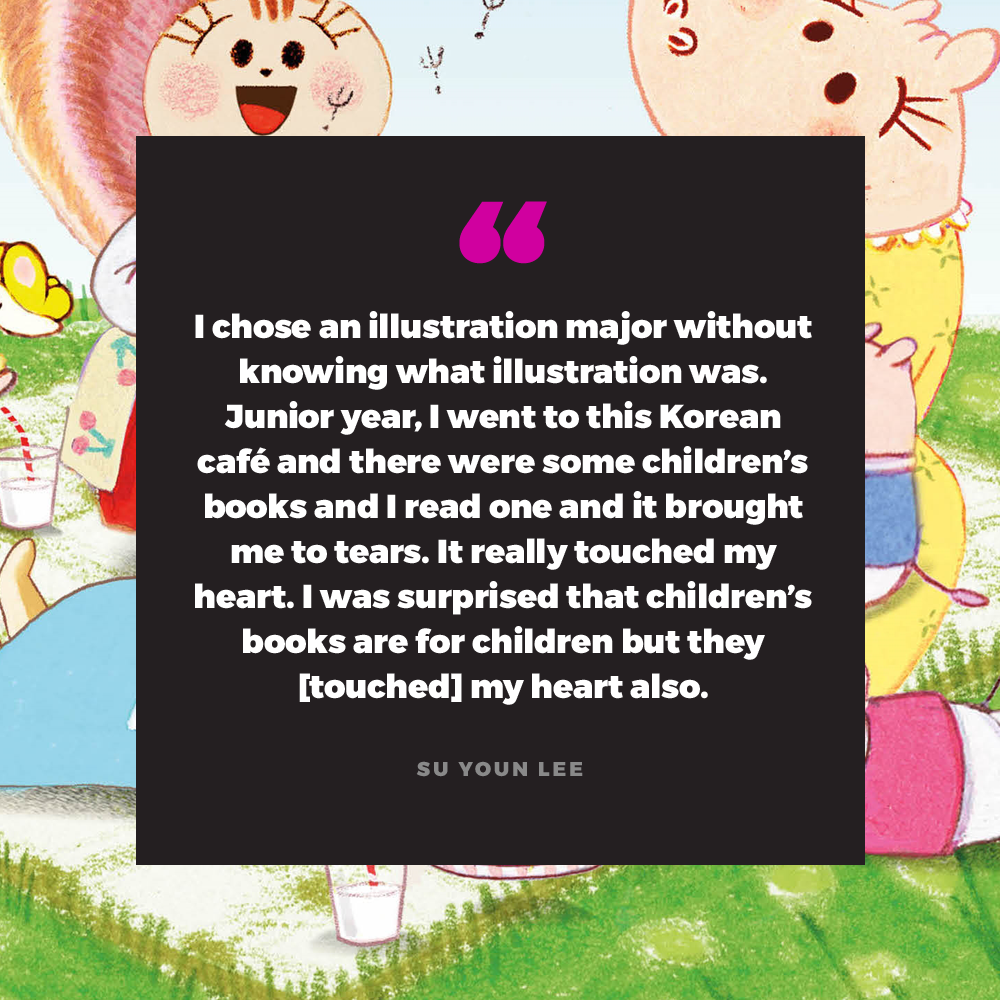 What’s one thing you learned?

So you have a huge background as an artist. Did you always want to go into illustrating and writing books?

Oh no. I chose [an] illustration major without knowing what illustration [was]. Junior year, I went [to] this Korean café and there were some children’s books and I read one and it [brought] me to tears. It really touched my heart. I was surprised that children’s books are for children but they are touching my heart also. That book made me decide to become a children’s book [author]. Like I want to touch not just children—but also the readers [who] are moms or dads or grandparents. Because I was like twenty-something, if this book touched me—[an] adult, then I want to make one book like this and touch not just children. At the time I was not into children [laughs].

What book was it that you read? Do you remember?

Because I Love You [by Max Lucado].

I know that in your twenties you weren’t that interested in kids but now you do have two. I hope you’re a bit more interested?

Do you think being a parent influences the way you write for children?

It really does. I didn’t dislike kids, I just didn’t know how to approach them. My firstborn is very shy and now I understand when kids say something [that] I didn’t understand [before].

So you read Have You Eaten? to your firstborn. What did she think?

I translated it into Korean. And at first it didn’t come out very smoothly because I had to ma[ke] it up. But every time I read her this book, my story [became] the same, my translation became regular. So she liked it! [She’d] say, “Oh where’s Coco?” or “Where’s Popo?” So it was really [a] good experience reading [my] book to [my] children because I thought, “maybe next time I [will] do this.” It’s self-critique as I read my books to my children. “Next time I will try much simpler” or “I will write like this.”

Kids can be the best editors. Do you have ideas for your next book?

I was thinking about a counting [book], counting one to five with the family. Like starting with single me and I was alone and that is one and then I met your father and we became two and then we had you and my pregnant belly is three.

I’ll keep my eyes open for that. I’m thinking about the backmatter at the end of Have You Eaten? and in the author’s note, you mention that before it was a greeting, the phrase originated in Korea after WWII and the Korean War, when food was scarce, to show concern and welcome. Do you have any particular memories of being asked this question? Or asking it yourself?

This story I made—when I was in [my] MFA, that was my first time living alone without my family, alone in the US. And this Coco, she didn’t have a kid but she really helped me like a mother. Even though I had friend[s] and a boyfriend, I felt really lonely. And this Coco helped. She always asked me, “Have you eaten?” [and] she gave me not just sweet potato[es]. She lived in New Jersey, I lived in New York, and every weekend I would go to her house. When I was writing this book, at first Coco and her husband [were] coming out in this book because I was so thankful for how they fed me and mentally, they helped me a lot. Not just me, but she helped a lot of people. She helped somebody—Popo—she divorced so Coco helped a lot. And Pocky, I wanted to make as a busy icon living and working in Manhattan. [The characters in the book] are all existing people and I didn’t want to tell them “it’s you” but Pocky, she worked in Manhattan she’s a busy woman, she’s really stressed, she’s also Japanese and she had visa problem[s] and Coco always helped feeding. And Caroline is me, who feel[s] loneliness.

I love that. I will read it differently now that I know they’re all real people. My last question: At the end of Have You Eaten? you provide the reader with a couple of recipes for sweet potatoes. What is your favorite way to eat sweet potatoes?

Ah, my favorite way is actually just with milk. But when I was young my mom always gave me [sweet potatoes with] kimchi. But nowadays when my mom makes me a big sweet potato I usually couple [it] with milk. 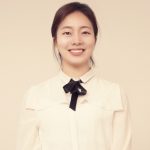 Su Youn Lee holds a BFA and MFA from the School of Visual Arts and won the 2016 SCBWI New York Student Illustrator Scholarship. She has had illustrations exhibited in cafes around the New York City metro area and in the New York Affordable Art Fair, for which she’s also served as a curator. Su Youn currently lives in Korea, and returns to the United States occasionally. Have You Eaten? is her debut picture book.