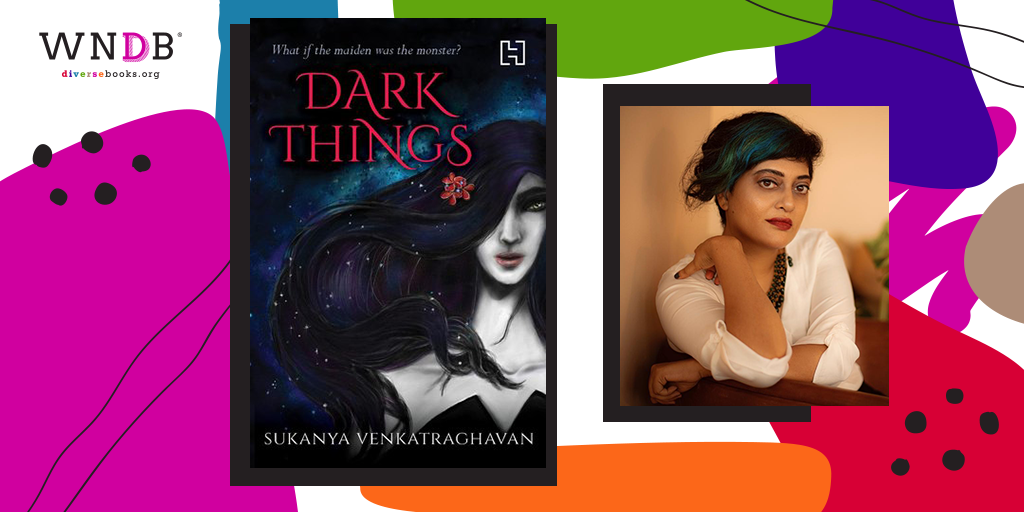 Today we’re pleased to welcome Sukanya Venkatraghavan to the WNDB blog to discuss her YA novel Dark Things.

Ardra has only known life as a Yakshi, designed to seduce and kill men after drawing out their deepest, darkest secrets for her evil mistress Hera, queen of the forsaken realm of Atala. Then, on one strange blood moon night, her victim, Dwai, survives, and her world spins out of control. Now Ardra must escape the wrath of Hera, who is plotting the unthinkable, ready to throw the universe into chaos.

To stop Her, Ardra must find answers to questions she hasn’t dared to ask before. What is the significance of the blood moon? Do Gandharvas and Apsaras exist or are they as much a myth as the sky city of Aakasha? Who is the mysterious Dara and what makes Dwai impervious to her powers?

Combining fantasy with the rich tapestry of folklore, Dark Things is a strange fairytale wrought of intrigue and enchantment, of shadows and secrets, of evil and those who battle it. 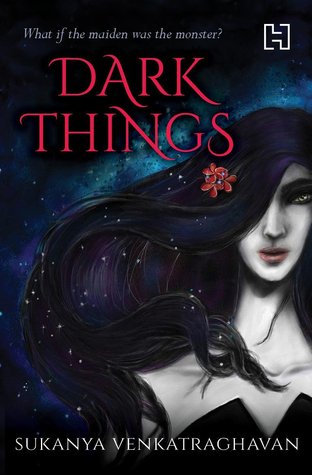 Before we speak about Dark Things, I want to start off with your own experience with young adult literature as a category. What were the stories and books you read at that age (or even later)? How did these stories influence the approach you took in shaping the characters or building the plot (if they did?)

As a child, I read everything. Enid Blyton, Amar Chitra Katha, Tinkle, Russian fairy tales, Malayalam weeklies, Misha, Chandamama, Phantom, Mandrake, Tarzan, Archies, the classics. My grandfather told me stories of mythology and also those that he made up. This fueled my imagination. I grew up in an old old house with secrets of her own and that fired my storytelling too. I don’t think I ever classified the books I read as ‘young adult’ or otherwise, I just read. Also, Kerala is rich in folklore and thus began my obsession with Yakshis.

Extending that question a little, as a writer, and you have had years of experience in journalism, there could be a tendency to work backward from writing for the audience—changing things based on what they might like or dislike. Were you conscious of who your reader would be as you penned your book? Did you have that, “It’s a YA book” at the back of your head?

I don’t view Dark Things as a YA book, to be honest. It is a book. And people read it. I crave for the freedom I enjoyed inside my head while writing Dark Things now. The reader was still an invisible person, the reviews were imaginary and there was no pressure to write a certain kind of book.

Ardra’s story and her quest is framed by a lot of folklore. Could you point the readers to some of the folk stories they borrow from? Do you or did you read or hear a lot of folklore?  Or was there research you needed to do?

I think a favorite part of a writer’s day is ‘research,’ Jokes aside, Yakshis figure very prominently in Kerala folklore and if anyone were to look for literature that featured them then the Ithihyamala is their best bet. There are English translations on the net.

My sense is that feminist stories, especially for younger readers, were not necessarily the norm in 2016. Do you think that was the case? Do you have recommendations of other books or movies in this space, like a starter pack for the young adult reader?

Dark Things was followed by Magical Women, where you were an editor, but I think it shares some elements—folk, magic, fantasy, feminism—with Dark Things. Is that a space you find yourself writing more in, or playing around more with, in either literary capacity?

I am drawn to writing fantasy more than anything else. Magical Women was a dream come true because I got to collaborate with others on their fantasy stories. We have some amazing fantasy fiction writers in this country and I was lucky to work with a bunch of them.

Speaking of new work, Dark Things has tremendous potential for a sequel. Have you thought about it? Is there anything else you are working on? Going back to an earlier question, are there reader theories you have come across which you would want to incorporate in the sequel?

Sadly, no sequel. Unless someone were to pay me pots of money to write the movie or show version and we had to make more parts or seasons. Dark Things the book ends where it does—in a space of endless possibilities.

Finally, as every writer must be asked, what is the one writing advice that has worked for you over these years? And is there one that has totally not, even though others swear by it?

The one writing advice that has worked for me is that no advice fits all. Do not go by the memes, the famous writer quotes, or the books that tell you how to write and when to do it. Do what suits you best. Create your own routine, your own way of working. You don’t have to write every day to be a writer. We need to stop telling people that. I haven’t written in two years and I am still a writer. 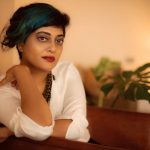 Sukanya Venkatraghavan is an Indian writer. Her first novel Dark Things was on Amazon India’s Most Memorable Books of 2016. She is the editor of Magical Women, a feminist, fantasy anthology.

Purple Pencil Project is a venture to bring Indian literature under one roof.

Previous Post: « Why I Wrote A Picture Book About Sadness
Next Post: Cover and Playlist Reveal for This Is Why They Hate Us by Aaron H. Aceves »
We've got new #BooksSaveLives swag in the WNDB Bon