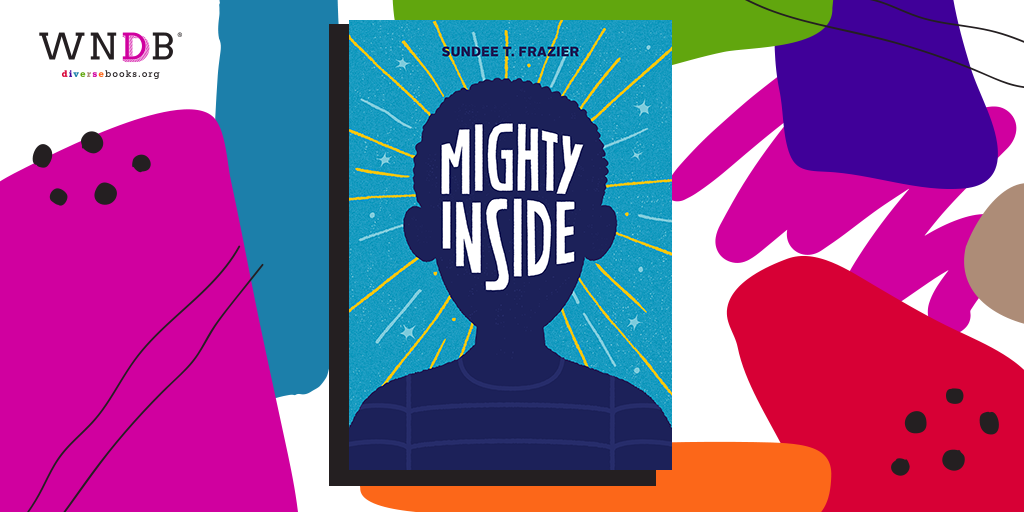 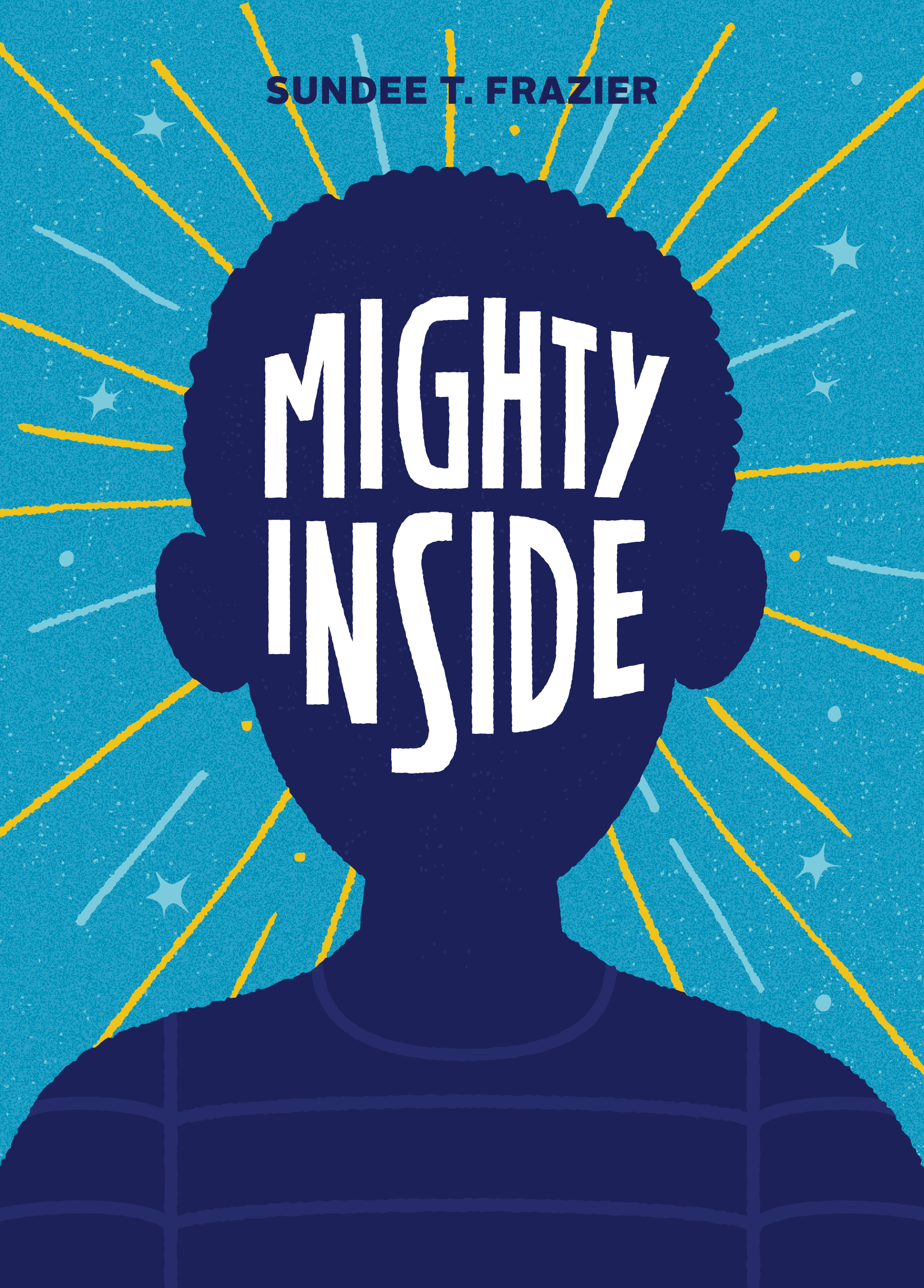 What are some of the ways in which your own lived experiences growing up in Spokane Washington shaped Mighty Inside? In what ways is Mighty Inside autobiographical?

Mighty Inside was inspired by the true story of how my grandparents acquired their first and only home in a part of Spokane where they were forbidden to live. It was the 1940s, and the neighborhood my grandpa wanted to live in was “redlined,” meaning realtors wouldn’t show homes to Black people. Segregation in housing was enforced by social contracts and sometimes even by language in deeds outlawing the sale of homes to anyone not White. An Italian man named Armond Caro posed as the buyer on behalf of my grandpa (who paid the Caros back over time, and then they deeded over the property). Unfortunately, the neighbors weren’t happy to find out who was actually moving in. A petition circulated to force my grandparents out, but they remained steadfast. Over time, their opponents gave up or moved away. Many of their neighbors became friends and allies.

I didn’t live in Spokane, but I visited often. My grandparents’ home represented love to me, so when I found out about the hate that surrounded its acquisition and what they’d had to go through just to live where they wanted, I knew I needed to write a story about it. I drew from the experiences of my dad and his siblings, who grew up in that neighborhood in the 1950s, and many of the elements are based on real events and places. My grandparents were fierce about advocating for their kids when they faced racism in school, but also stressed that they were never to see themselves as victims. They stayed connected to the small, tight-knit African American community through church; social, cultural, and civic clubs; and lifelong friendships. Both my grandparents were born and raised in Spokane after our people migrated from North Carolina in the early 1900s seeking greater opportunity and freedom from violence. They were founding members of the Black community in Spokane, and I wrote Mighty Inside as an homage to them and to this community—to their resilience and strength in the face of many systemic disadvantages.

In Mighty Inside, we learn about the many forms that racism and prejudice can take. Can you share a little about your hopes for those reading your book, especially young readers, who may be experiencing racism or prejudice?

My hope is that kids who are experiencing any form of racism or prejudice—from the blatant forms of name-calling and physical violence to the micro-aggressions of exceptionalism, stereotyping, and exclusion—will know they can speak up and say something, either directly to the perpetrators or to peers and adults who will stand with them. I hope that they are inspired by Melvin to believe that even if they’re not sure what to say or how to say it, the most important thing is to say something. Also, there are people who want to speak up with them and are with them in this struggle, like Lenny is for Melvin, or the White girls who ride the freight elevator with Melvin’s sister, or the allies who bought my grandparents’ home on their behalf.

Voice is a central theme throughout. Through Melvin’s experiences with others as well as his own inner reflections, we learn of the power of finding one’s own voice; both literally and in terms of knowing who we are and what we will stand up for. Could you share a bit about this central theme and its timeliness for today’s readers?

Melvin has a stutter, which makes speaking a challenge for him. He’s also starting high school in the shadow of two accomplished older siblings. So, he’s quite anxious and unsure, wishing he could speak smoothly and thinking if he could, he would be more confident. This is the 1950s, when there was even less known about stuttering and less support for stuttering as a way of speaking. He is also awakening to the realities of racism—not just in the South, where Emmett Till has been brutally murdered, but in his own community, and he wants to speak up about it.

Today’s youth know about speaking up. They are on the frontlines of protests—for Black Lives, humane policing, climate change, gun violence, and queer rights. I am in awe of their boldness and ability to demand an audience with politicians and those in power. For young people who want to add their voices to the growing cries for change but feel less sure of themselves, I hope this story will be an encouragement. As Melvin learns, confidence comes as we stand up for ourselves and for others who are getting pushed around. When we root ourselves in the tradition of people before us who stood their ground, who asserted their equality through their actions, we will find ourselves strengthened for the task at hand. Like Melvin, we will find ourselves emboldened, standing strong in the unstoppable river of truth and justice that flows through all of history and continues to flow. 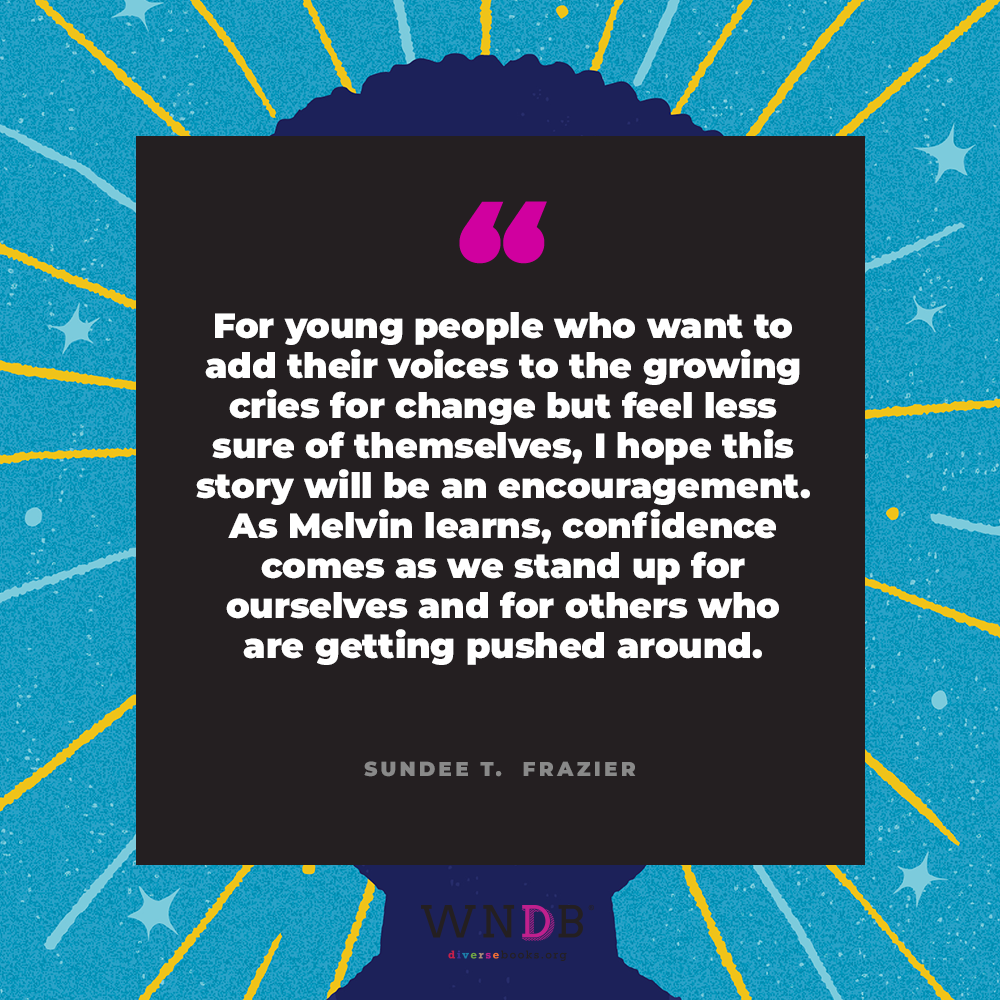 For young people who want to participate in changing society, the arts are a fantastic way to make an impact, sometimes even more powerfully than other methods. Melvin experiences great freedom of expression when playing music with Lenny. As he says, it’s almost like speaking without words, and for a person who stutters, this is very liberating.

Art has the power to speak straight to the heart—from the heart of the performer, writer, musician, artist, to the heart of the recipient or witness of the art. That means art connects us, and in these times of social isolation, we need this connection more than ever.

I also like to think of art as a form of light, illuminating and revealing truths so that we can see ourselves and others more clearly. Art can show us our capacity for brilliance and our better selves—our ability to sacrifice and come together for the sake of others. But also, our capacity for selfishness, meanness, and cruelty, which are at the heart of all injustice. As a tool for transformation, art is unparalleled, which means that we need art more than ever in the midst of a societal reckoning unlike anything we’ve experienced in our lifetimes. Art makes an appeal to our sense of compassion and justice, and gives us inspiration and boldness to stand for these things.

The world feels shrouded in storm clouds these days. Young people need the burden-lifting, heart-connecting, light-shining power that the arts provide, both as receivers and creators of that light. I want children to feel free and unburdened, and art does that.

Sundee T. Frazier is the ALA Coretta Scott King/John Steptoe New Talent award-winning author of Brendan Buckley’s Universe and Everything in It, Brendan Buckley’s Sixth-Grade Experiment, The Other Half of My Heart, and the Cleo Edison Oliver series. Mighty Inside was inspired by her Black family’s real-life experiences integrating a white neighborhood in Spokane, WA, in the 1950s and her childhood memories of Spokane’s proud, tight-knit, African-American community. Her books have been nominated for twelve state children’s choice awards and been recognized by the Children’s Book Council, Bank Street College of Education, and Kirkus Reviews. Frazier is a graduate of the Vermont College of Fine Arts. She lives near Seattle, WA, with her husband and two daughters. You can learn more about her and her work at www.sundeefrazier.com.

Meagan Gough received her PhD from USASK with a Major in Comparative Aboriginal History and Anthropology in 2015. Her Master’s research was also in Cultural Anthropology and based on an oral history project undertaken in 2003 in collaboration with members of the Stó:lō First Nation. Her love of people, as well as her belief in the value of celebrating and maintaining the stories, teachings, and traditions of those she works with, has inspired her travels and diverse learning experiences working as a field researcher and oral history interviewer across North America.

Previous Post: « Cover Reveal for The Hair Book by LaTonya Yvette, Co-authored and Illustrated by Amanda Jane Jones
Next Post: The Beauty of Intersectionality in Mentorship »
Congratulations to the 2023 #ALAYMA winners and ho