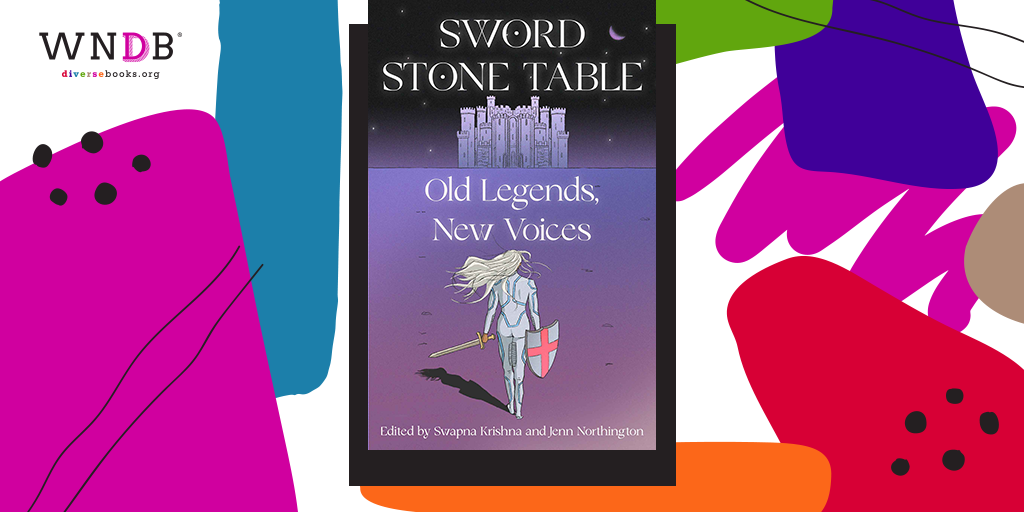 From the vast lore surrounding King Arthur, Camelot, and the Knights of the Round Table, comes an anthology of gender-bent, race-bent, LGBTQIA+ inclusive retellings.

Here you’ll find the Lady of the Lake reimagined as an albino Ugandan sorceress and the Lady of Shalott as a wealthy, isolated woman in futuristic Mexico City; you’ll see Excalibur rediscovered as a baseball bat that grants a washed-up minor leaguer a fresh shot at glory and as a lost ceremonial drum that returns to a young First Nations boy the power and the dignity of his people. There are stories set in Gilded Age Chicago, ’80s New York, twenty-first century Singapore, and space; there are lesbian lady knights, Arthur and Merlin reborn in the modern era for a second chance at saving the world and falling in love—even a coffee shop AU.

Brave, bold, and groundbreaking, the stories in Sword Stone Table will bring fresh life to beloved myths and give long-time fans a chance to finally see themselves in their favorite legends. 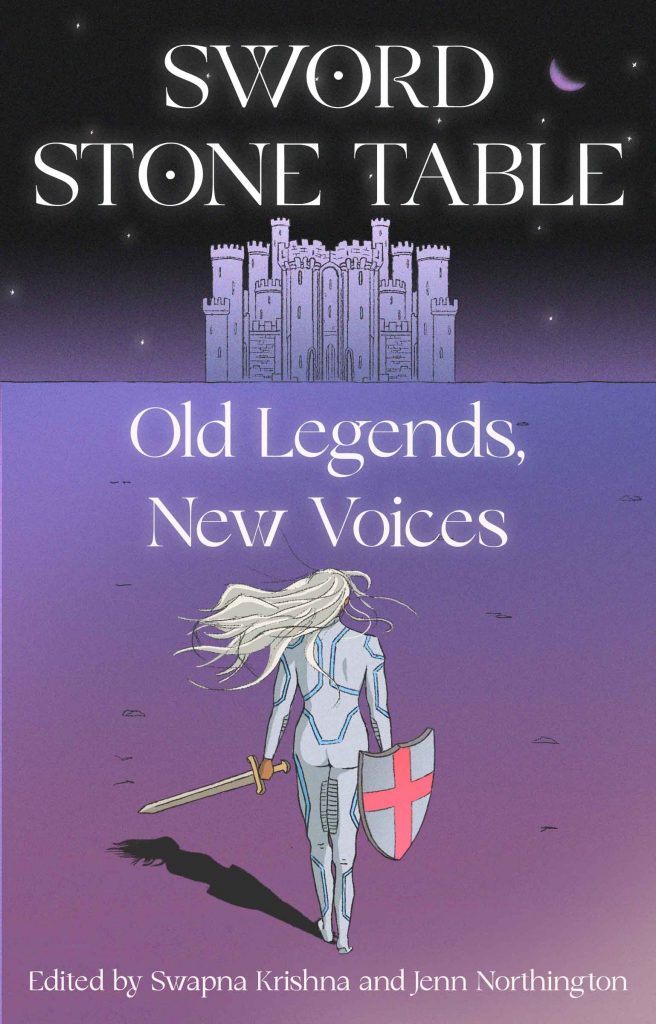 First of all, congratulations on your newest book, Sword Stone Table: Old Legends, New Voices? Could you tell the readers of We Need Diverse Books what they can expect from this title?SK: Thank you! We’re hoping that this book has something for everyone. If you’re a fan of the legend, we think you’ll be fascinated by how the authors reinvented these tales to tell stories that feel entirely fresh and new—and are much more inclusive than the original. If you’re not, there’s still a lot here for you—fine stories from fantastic authors. Either way, it’s an incredible collection and I’m so proud to have worked on it.

Where did the inspiration initially come from for this book? Why King Arthur and the Knights of the Round Table?

JN: One of the things Swapna and I bonded over back in the day was our mutual love for Mary Stewart’s Merlin series; both of us have been fans of Arthurian legends since we were little. A few years ago I found myself wishing there were more retellings out there—and retellings that really played with the subject material, took it out of its original context, and explored it in new and interesting ways—and when I mentioned it to Swapna and she said she’d be interested in working on it as well, the project was born!

How did you choose the authors for this anthology?

JN: We made a giant spreadsheet of everyone we could think of: Authors we knew, authors we didn’t know, writers we liked who hadn’t hit the mainstream yet, writers who were so fancy we weren’t even sure we dared put them on the list. Then we started sending out asks! It was a long process, but everyone was so kind even when they turned us down, and we couldn’t be happier with the final list.

What was it like collaborating on the project together?

SK: This is the first anthology I’ve ever worked on, and it was a lot more admin work than I anticipated! Jenn and I thankfully work in similar ways, so our styles really complemented each other process-wise. It helped that we both had the same goal with this anthology: To gather a list of authors we both respect and ask them to tell the story they wanted to—so it wasn’t about any one person’s editorial vision. Instead, it was about prioritizing the author’s point of view.

When most people imagine King Arthur, Camelot, and the Knights of the Round Table they usually think “old, white men”? Do you think there’s power in taking “traditional” narratives and making them more diverse?

JN: Absolutely. I think that not only are there themes already in the originals that can and should be explored (there’s a reason there are so many ships for Arthur/Lancelot out there!), but I think that everyone deserves to find themselves in their favorite stories, and sometimes that means rewriting them!

SK: One of the things that frustrates me most is when there’s an inclusive spin on an old story, and people say “Aren’t we done with this trend?” You’re seeing it now with the diverse Austen re-tellings. The point is that actually, no, we’re not finished because writing a person of color into a traditionally white space, or reinterpreting a story in a diverse way, is something entirely new. It’s giving a different audience a chance to see themselves in a story, and I think that’s so important—and I hope we can contribute to that with this anthology.

What advice would you give to other people who are interested in creating their own anthology collections or stories?

JN: Be prepared to spend a lot of time on logistics! It’s a ton of work, and you’re doing it mostly for the love of the stories because anthologies basically never end up on the bestseller list and aren’t going to make you rich and famous. (Like most things in publishing, honestly.) You have to be willing to spend a lot of time on detail work, in addition to the fun parts like reading and editing the stories themselves.

SK: Totally agree with Jenn here! We both knew it would be a lot of work, but I didn’t anticipate just how much. Also, it can be really difficult to get started on anthology—if you don’t have an agent, in order to query you have to ask authors to commit and even write stories for, a project you may never sell. It’s an intimidating proposition, to say the least. 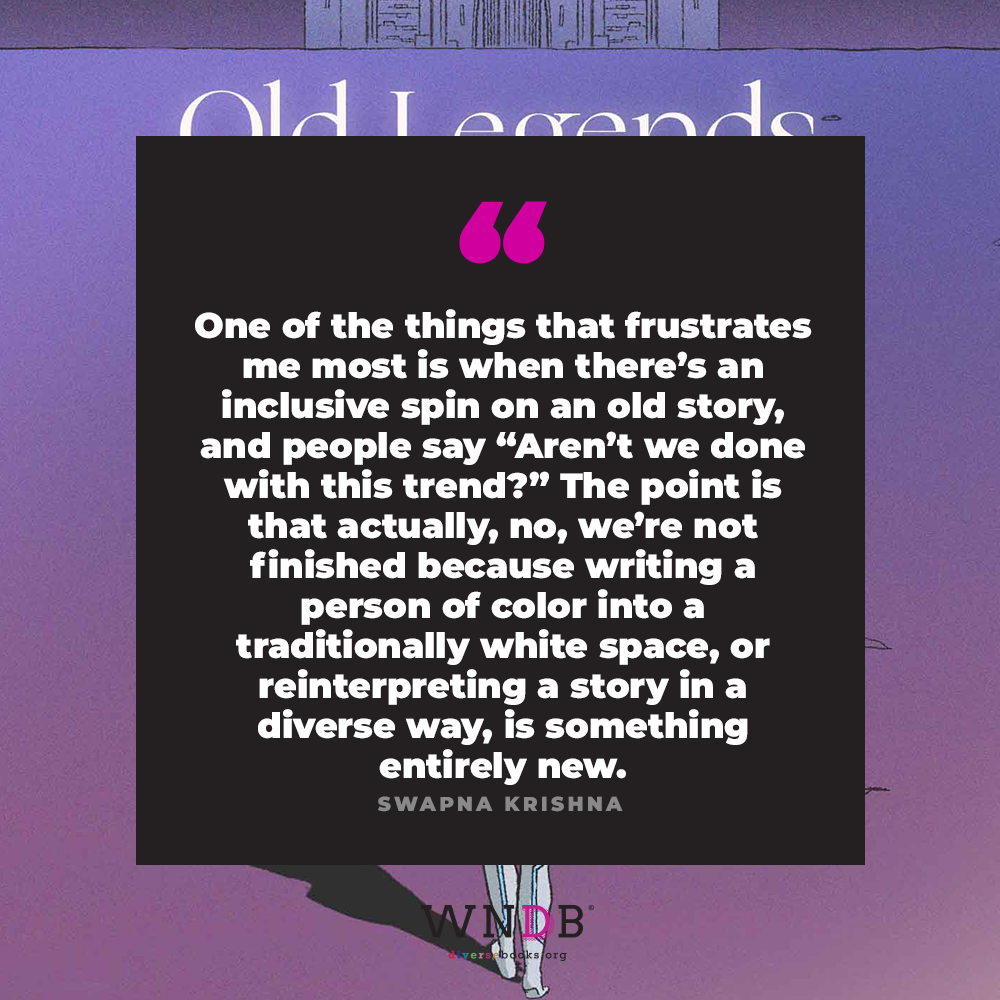 What other anthologies or YA novels do you think Sword Stone Table: Old Legends, New Voices is in conversation with?

SK: There are so many—we took inspiration from Ellen Oh and Elsie Chapman’s A Thousand Beginnings and Endings, because YA has been doing really creative work with anthologies that is only just now reaching the adult market. And we can’t forget books like Tracy Deonn’s Legendborn and Kiersten White’s The Guinevere Deception. We are hardly the only ones reinventing and reimagining King Arthur, and we’re so thrilled to be in such fantastic company, both as editors and fans of the legend.

What’s one question you haven’t been asked yet, but wish you were?

JN: No one has asked yet what the scariest part of the process was, and if I’m being honest, for me, it’s being new at this. Writers have put their time, energy, and trust into us, and we are definitely learning as we go, which is nerve-wracking! Exciting, but nerve-wracking.

SK: My thoughts are in line with Jenn—mine would be “What’s it like editing fiction, when you haven’t done it before?” I’ve edited a lot of nonfiction, but this is my first foray into fiction, and it was a learning experience to be sure. Luckily we had a fantastic team, and our editor at Vintage, Anna Kaufman, was patient and taught us so much about how to edit and what to look for.

What are other books or anthologies can you recommend?

JN: There are so many! But a few anthologies that I particularly love and took inspiration from are: His Hideous Heart edited by Dahlia Adler, which are Poe retellings; Glass and Gardens: Solarpunk Summers edited by Sarena Ulibarri; and Not So Stories edited by David Thomas Moore, which are Kipling retellings from an anti-colonialist perspective.

SK: Once Upon an Eid from S.K. Ali and Aisha Saeed, which is middle grade, is fantastic, as is Welcome Home, an adoption anthology edited by Eric Smith. I haven’t yet gotten to read my copy of That Way Madness Lies, Dahlia Adler’s Shakespeare retelling anthology, but you can bet it’s near the top of my list. 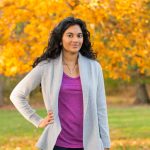 Swapna Krishna is a space, technology, and pop culture writer and journalist. Her work has been published at Engadget, The Verge, Polygon, StarTrek.com, StarWars.com, The A.V. Club, and more. You can find her on Twitter at @skrishna.

Jenn Northington is a former bookseller and a current reviewer, podcaster, and editor with Riot New Media Group. She’s a lifelong book nerd and can be found primarily on Instagram at @iamjennIRL.

Previous Post: « Congratulations to the 2021 Creative Writing Awards Winners!
Next Post: How Teachers Can Increase the Diversity of Their Reading Curriculum »
We're thrilled to reveal the cover for TOKYO NIGHT