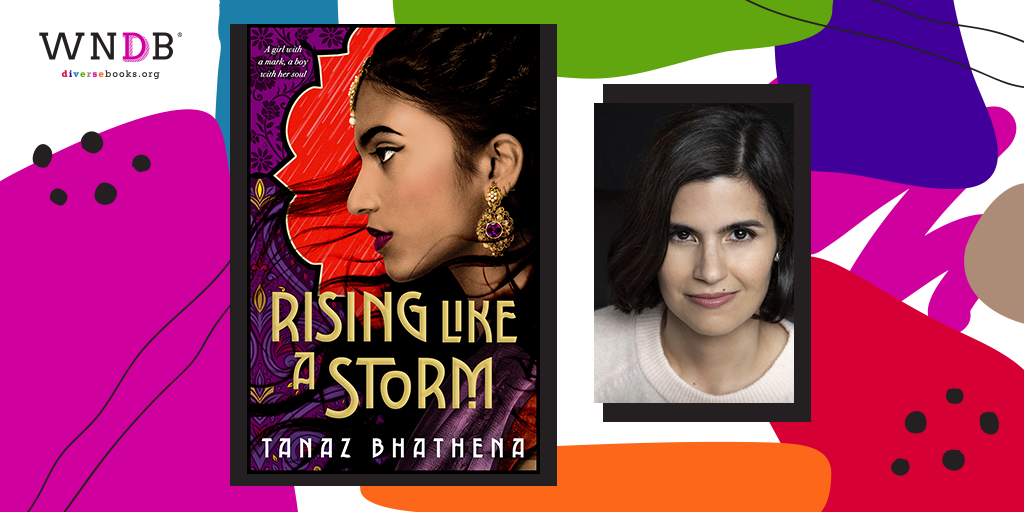 Today we’re pleased to welcome Tanaz Bhathena to the WNDB blog to discuss her YA novel Rising Like a Storm, out June 22, 2021!

In the concluding installment to the Wrath of Ambar duology from masterful author Tanaz Bhathena, Gul and Cavas must unite their magical forces—and hold onto their growing romance—to save their kingdom from tyranny.

With King Lohar dead and a usurper queen in power, Gul and Cavas face a new tyrannical government that is bent on killing them both. Their roles in King Lohar’s death have not gone unnoticed, and the new queen is out for blood. What she doesn’t know is that Gul and Cavas have a connection that runs deeper than romance, and together, they just might have the strength and magic to end her for good.

Then a grave mistake ends with Cavas taken prisoner by the government. Gul must train an army of warriors alone. With alliances shifting and the thirst for vengeance growing, the fate of Ambar seems ever more uncertain. It will take every ounce of strength, love, and sacrifice for Gul and Cavas to reach their final goal—and build a more just world than they’ve ever known. 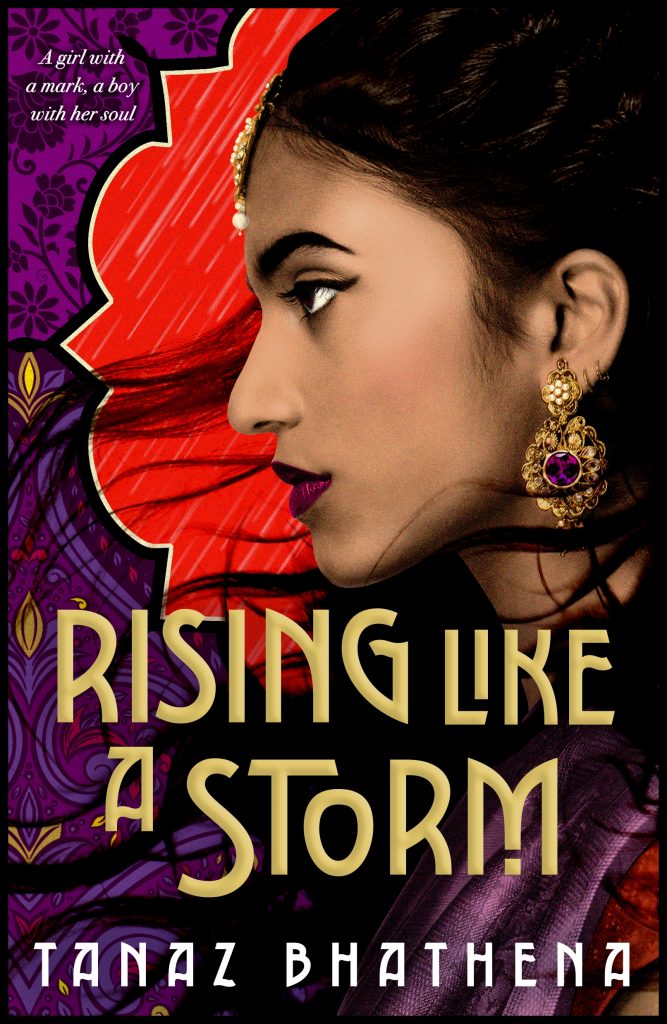 What research did you conduct to write The Wrath of Ambar duology? What was the process like?

I used 15th and 16th century India as a springboard for my research, a region that was called Hindustan at the time. A lot of the architecture in the books is inspired by the sprawling, labyrinthine forts of Rajasthan and Delhi, which often had smaller palaces, temples, and mosques within them. The politics and drama of the royal courts were inspired by the stories I grew up hearing about Mughal emperors and Rajput kings like Emperor Akbar and Prithviraj Chauhan—though I was even more curious about the empresses and the queens, as history tends to be very male-centric and often, the stories of these women are relegated to footnotes.

My research process started off with Pinterest mood boards about pretty clothes and weapons and jewelry (as these things often do) and then evolved into looking up primary sources like Arthashastra by Kautilya and Ayn Akbary by Abul Fazl Mobarak, a treatise of Mughal administration during Emperor Akbar’s time. I also read a lot of historical non-fiction by authors like Ruby Lal, William Dalrymple, and Abraham Early, and watched TV shows, films, and documentaries about medieval India in Hindi and English.

Are there any legends/myths that inspired Gul and Cavas’ story?

I knew going in that I would not be doing a retelling of mythology as I feel like a lot of Indian fantasy authors have done that—and done it incredibly well. I wanted to play a little more with my world—to create my own myths, while also paying homage to existing mythology from texts like the Ramayana, the Mahabharata, and the Shahnameh.

Is there any significance behind the meanings of your characters’ names?

That’s a great question. I often think a lot about character names and like to have some sort of meaning behind each one, if possible. Gul, for example, got her name from the Gulabi Gang, a welfare organization in North India with vigilante roots. Women in gulabi or rose-colored saris would go from village to village protecting other women who were being abused by family or landlords. Cavas is the Indian Zoroastrian iteration of the Persian Kaus or Kavus and was taken from a king in the Shahnameh. Both Gul and Cavas’s names are very much reflective of how their characters evolve through the series and take on positions of responsibility and leadership.

Gul and Cavas complement each other well. How did you shape their personalities? Are they inspired by anyone you know?

Thank you! Both Gul and Cavas are shaped by their individual upbringing and circumstances; they both come from different parts of society and this has a huge impact on how they behave in the books. Gul, whose motivation comes from a place of deep grief and anger, is also privileged by virtue of her magical blood, and in some ways; this makes her really reckless because she doesn’t really think of what the consequences of her actions can be. Cavas, on the other hand, is a lot more circumspect having grown up in society’s margins; he has so much more to lose and he’s fully aware of it.

Both Gul and Cavas are inspired by parts of my own personality—at different times. Gul’s temper is as hot as mine used to be when I was younger, though I didn’t act on it as much as she does in this series! When I’m thoughtful and introspective, I can be a lot more like Cavas.

Why did you choose to set Ambar in a South Asian/Middle Eastern-inspired realm?

I’m an Indian of Zoroastrian faith or a Parsi: My ancestors came from Persia to India as refugees many years ago and planted roots in Gujarat and Maharashtra. Parsi culture in India is unique in many ways and I knew going in that I wanted to create a world that drew on these elements, incorporating both Indian and Persian culture in this series. In some ways, it worked out perfectly as Persia had a huge influence on medieval India. Persian was the language of the royal courts and great epics such as the Mahabharat were translated from Sanskrit into Persian during Emperor Akbar’s time. I also created a race of hybrid human and animal magical beings called the Pashu inspired by magical creatures from the Shahmameh and various other Persian myths and paintings. 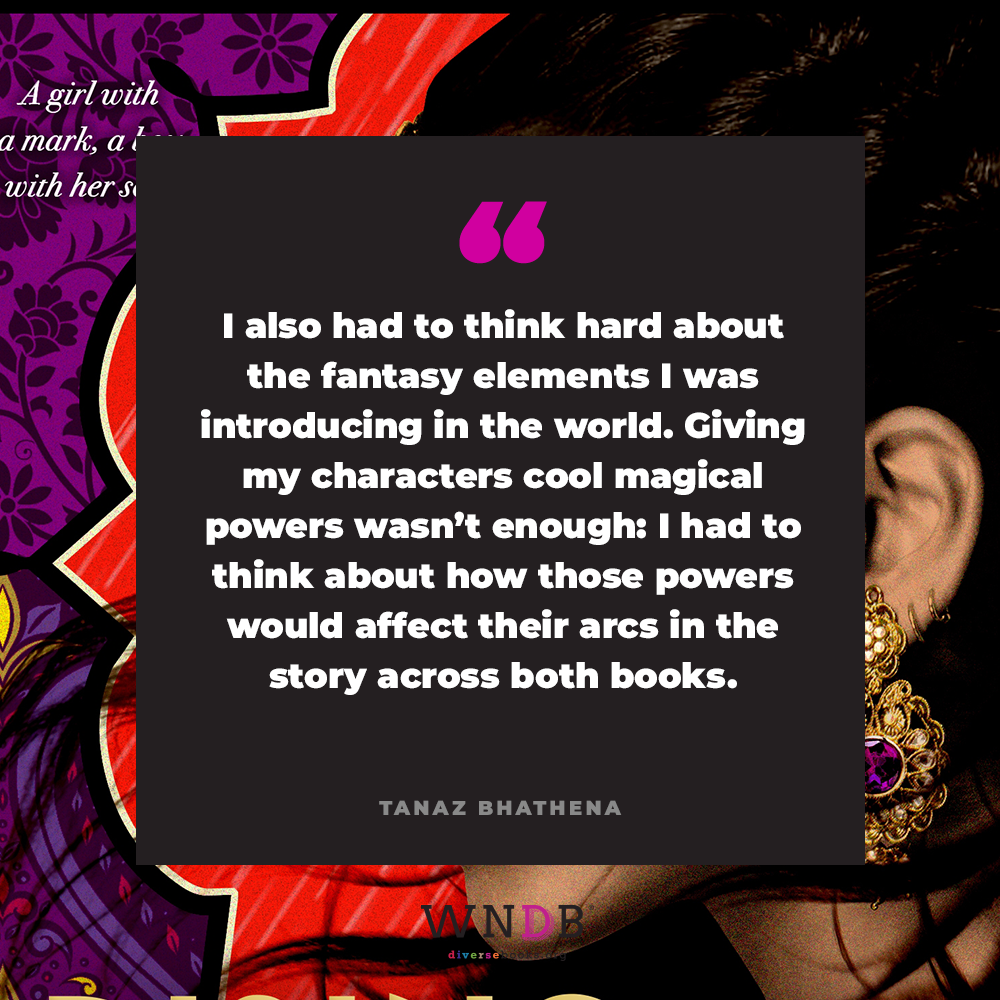 Did you learn anything new about the writing process (especially crafting fantastical worlds) in between writing Hunted by the Sky and Rising Like a Storm?

Though I was writing a fantasy in a secondary world, it was still largely inspired by existing Indian history and I really had to analyze my research for bias. India was colonized by the British and oftentimes our history is told through a lens of colonization. I had to decolonize my imagination to figure out how the kingdom of Ambar would be similar to and different from a typical kingdom in 15th century India and what overall story I wanted to tell by introducing these differences, especially when it came to the role of women and how this society would deal with religion and sexuality. I also had to think hard about the fantasy elements I was introducing in the world. Giving my characters cool magical powers wasn’t enough: I had to think about how those powers would affect their arcs in the story across both books and how magical events would impact the world of Ambar and Svapnalok at large.

Do you have any plans to continue crafting stories in Ambar’s realm?

Perhaps not in Ambar, but you never know! Also, there are still three more kingdoms left to explore…

Do you have any recommendations, South-Asian-inspired fantasy or otherwise, for those who enjoyed your stories?

The Palace of Illusions by Chitra Banerjee Divakaruni, The Tiger at Midnight series by Swati Teerdhala, Empire of Sand by Tasha Suri, Sisters of the Snake by Sarena and Sasha Nanua, Star Daughter by Shveta Thakrar, The Bloodprint by Ausma Zehanat Khan, and Dark Things by Sukanya Venkatraghavan.

Is there anything you’d like readers to know that hasn’t been previously mentioned?

I wanted to write a book that would not only introduce Indian fantasy in a new and fresh way to readers, but also allow them to escape our mundane realities and go on a journey full of adventure, romance, danger, and magic. Ultimately, I hope that they just have fun while reading the series and enjoy this twisted and magical world as much as I did! 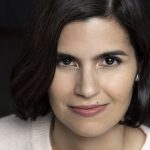 Tanaz Bhathena writes books for young adults. Her latest novel, Hunted by the Sky, was named a Best Book of the Year by the CBC and USBBY, and is the first of a YA fantasy duology set in a world inspired by medieval India, with the sequel Rising like a Storm releasing on June 22, 2021. Her novel The Beauty of the Moment won the Nautilus Gold Award for Young Adult Fiction and has also been nominated for the Ontario Library Association’s White Pine Award. Her acclaimed debut, A Girl Like That, was named a Best Book of the Year by numerous outlets including The Globe and Mail, Seventeen, and The Times of India. She lives in Missisauga, Ontario, with her family.

Previous Post: « Q&A With Margarita Engle and Ruth Behar
Next Post: Cover Reveal for Vial of Tears by Cristin Bishara »
Congratulations to the 2023 #ALAYMA winners and ho