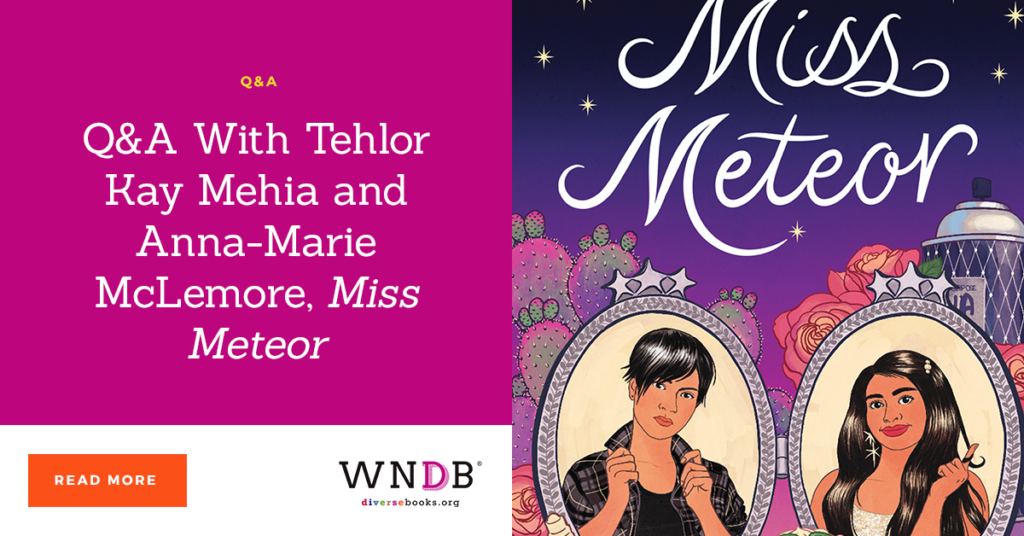 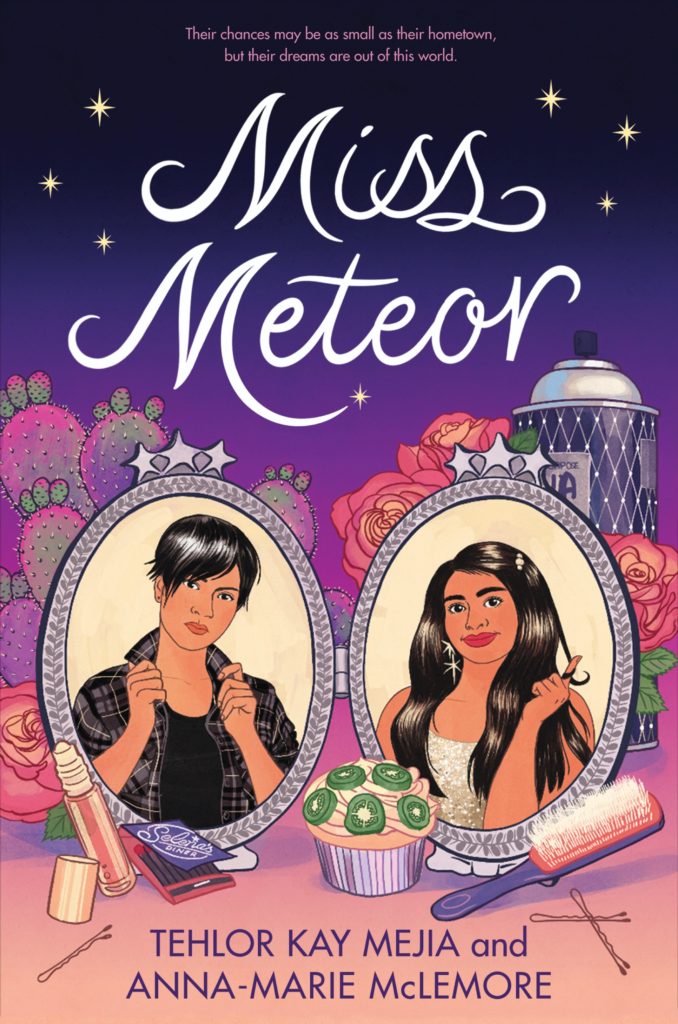 There hasn’t been a winner of the Miss Meteor beauty pageant who looks like Lita Perez or Chicky Quintanilla in all its history. But that’s not the only reason Lita wants to enter the contest, or why her ex-best friend Chicky wants to help her. The road to becoming Miss Meteor isn’t about being perfect; it’s about sharing who you are with the world—and loving the parts of yourself no one else understands. So to pull off the unlikeliest underdog story in pageant history, Lita and Chicky are going to have to forget the past and imagine a future where girls like them are more than enough—they are everything.

Witty and heartfelt with characters that leap off the page, Miss Meteor is acclaimed authors Anna-Marie McLemore and Tehlor Kay Mejia’s first book together.

What was your collaboration process like for writing Miss Meteor? Where did the idea emerge for this story?

Anna-Marie: The first “we have to write this book” moment came when Tehlor and I were talking about ideas we had but that we couldn’t figure out how to turn into whole books. And as we were just kind of throwing them out there, we realized that two of them totally fit together, that they were two halves of one story. I had wanted to write a fun pageant book about a girl from space who wants to qualify for the Miss Universe pageant, and Tehlor…

Tehlor: Mine was about extraterrestrials! Specifically, a girl who’s mad about being called an alien (meaning immigrant) and accidentally uses brujeria to summon aliens (meaning extraterrestrials). Oh, language. Anyway, we were on a retreat in the middle of the scary Oregon woods and somehow there was enough magic there to make us want to squish them together and see what happened! (And I’m so glad we did.)

You have both contributed short stories to anthologies such as All Out and Toil & Trouble (both of which I loved). What do you feel is different about writing a short story for an anthology from writing a novel or a series as an author or writing a novel with a co-author?

Tehlor: They’re all such different beasts to me, but I think the main difference for me is that writing a novel (or series) is such a lonely exercise. Not always in a bad way, but it really is just you and the page for so much of the process. With an anthology, it’s still you and the page, but you have a sense that you’re contributing to something larger, and afterward you get to see your story in conversation with all these other stories across a single theme which is so surreal and fun. A co-write though is so collaborative the whole time. It’s fun in a way I don’t think I’ve ever found another type of writing to be. You’re moving quickly and bouncing ideas off each other at every stage and your characters are getting to know each other in real time. It’s magic.

A-M: Tehlor and I have joked that, with Miss Meteor, we ended up creating a multi-genre co-write, with the chapters Tehlor wrote from Chicky’s POV being primarily contemporary, and the chapters I wrote from Lita’s POV being pretty steeped in magic. And that’s part of what I love about this story. Chicky has her own down-to-earth (pun kind of intended) reality in the town of Meteor, while also taking on faith the magic in Lita’s. Lita’s perpetually looking toward the stars, while also marveling at everyone around her on Earth. These are two characters who have very different experiences of this planet, but who respect and embrace each other’s.

Miss Meteor doesn’t shy away from talking about how racism and homophobia/anti-LGBTQ+ sentiments affect Lita and Chicky. Why do you think these themes and other conversations about oppression against marginalized communities are important in a beauty pageant story, similar to the way that fatphobia was addressed in Julie Murphy’s Dumplin‘?

Tehlor: For me, it feels less important because it’s this type of story and more important that we be seen in any type of story. For so long we had the sense that a “diverse” book was a book about struggle, or about something that happened a long time ago or was going to end tragically. I think modern stories about marginalized people (especially in settings that are fun!) are so important because we need marginalized kids to see themselves living lives full of joy and getting the happy ending. So many of us didn’t even know we were allowed to imagine those things for so long because we never saw them happen to someone who looked or lived or loved like we did.

A-M: I kind of grew up wanting to be a beauty queen, just like Lita, but, like Lita, I mostly saw thin white women being crowned on TV. And it didn’t take me long to realize that that’s what most pageants, and often, the world, wanted. Being a queer kid who was still very much figuring out their gender identity just kind of made it worse, knowing how much I did not fit what these pageants told me was valuable. And in Miss Meteor, it’s not like Lita doesn’t realize the very white pageant legacy she’s going up against. She’s very aware of it. But she believes she’s got a chance. I stopped believing that as a kid. So Lita’s kind of walking out on that stage for me and my primxs and anyone like us who had those kinds of dreams too.

Anna-Marie, do you make your signature flower crowns, which you often wear to bookish events and in photos, yourself, or do you buy them?

A-M: I make them! I do a lot of work with real flowers, and a surprising number of those skills transfer over to working with fabric and paper ones. I made the fluffy white and red one for Blanca y Roja, and the leafy, viney, red rose one for Dark and Deepest Red, and I have an in-progress one for The Mirror Season. There is, however, one I did not make, but that a certain fellow author bought me…

Tehlor, you’ve written MG as well as YA. How do you decide if the story you want to tell should be written for a middle-grade audience or a young adult one? What do you love most about writing for each age group?

Tehlor: Oh man, again, two very different beasts! I love YA because there’s this sense of casting off your childhood cocoon and becoming what’s next. There’s so much that’s beautiful to explore in those moments of discovering your agency or independence, discovering what kind of person you want to be and leaving those early marks on the world. Middle grade, by contrast, is a time when your actions are still so bound to the adults or caretakers in your life (good and bad) but those early stirrings of independence are still so intense to feel. In some ways, a middle grade personal revolution or transformation can feel quieter than the “I am becoming hear me roar” drama of a YA, but I think those smaller, early collections of independence and rebellion can still be so powerful even when you have to couch them in the expectations of the people around you.

What other books do you see Miss Meteor as being in conversation with? Do you have any recommendations for forthcoming or published YA books?

A-M: LOL, Tehlor, are we probably gonna shout Undead Girl Gang in unison? I’ll also add in Lily Anderson’s contemporary novels, The Only Thing Worse Than Me Is You and Not Now, Not Ever. Her mix of humor and incredible character depth is a huge inspiration.

Tehlor: Undead Girl Gang!! (No really, I was gonna say it too!) I love to think that Miss Meteor is a small part of a growing canon of books about Latinx teens experiencing joy, planning shenanigans, thinking obsessively about kissing, and all the deeply teen things we’ve so often seen as reserved for straight and/or white characters—but that also don’t shy away from characters who are deeply a part of their families and their cultures. My other favorite book (besides Undead Girl Gang and Everything by Lily Anderson) doing this is probably Don’t Date Rosa Santos by Nina Moreno, and I actually have a secret fanfic brewing in my head where Chicky and Rosa get up to some totally uncharacteristic mischief together.

A-M: I love getting asked about my research, whether it’s historical (I’ve gotten to share very strange medieval beauty secrets I learned about for Dark and Deepest Red) or more contemporary (swimming in a mermaid tail for The Weight of Feathers). And the pageant research for Miss Meteor was both a lot of fun and hilarious. A real-life beauty queen even zipped me into some of her dresses, did spectacularly dramatic stage glamor makeup on me, and tried to get me to do the beauty queen walk, and it is way harder than it looks. I totally felt for the task in front of Lita and in front of the Quintanilla sisters trying to prep her for the stage!

Tehlor: I wish more people would ask who the story is for. I always want to scream QUEER LATINX READERS! Because I think, while of course, we hope our books will resonate with a wide audience, this book, in particular, is so mine and A-M’s love letter to the younger versions of ourselves and all the queer Latinx readers we love. 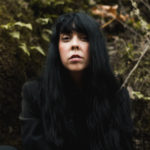 Tehlor Kay Mejia is an Oregon native and the author of the YA novels We Set the Dark on Fire and We Unleash the Merciless Storm and the middle grade novel Paola Santiago and the Drowned Palace. Her short fiction has appeared in the All Out and Toil & Trouble anthologies from Harlequin Teen. You can find her on Twitter @tehlorkay. 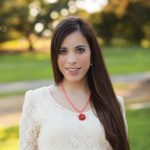 Anna-Marie McLemore was born in the foothills of the San Gabriel Mountains, raised in the same town as the world’s largest wisteria vine, and taught by their family to hear la llorona in the Santa Ana winds. They are the author of The Weight of Feathers, When the Moon Was Ours, Wild Beauty, Blanca & Roja, and Dark and Deepest Red.