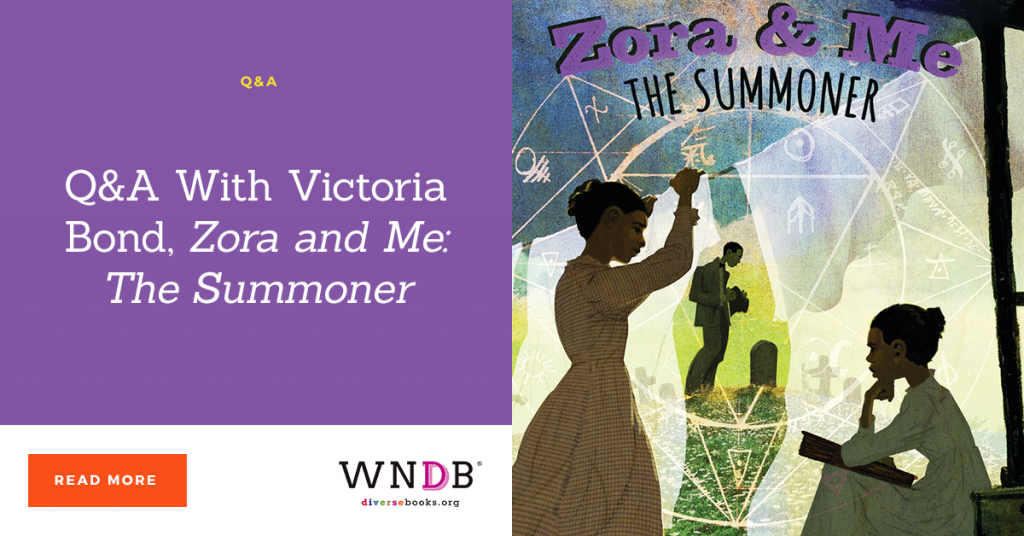 Today we’re pleased to welcome Victoria Bond to the WNDB blog to discuss her MG novel Zora and Me: The Summoner (the last book of the Zora and Me trilogy), out October 13, 2020!

Join Victoria Bond for a virtual launch party for Zora and Me: The Summoner on October 13 at 7:00 pm EST. Register here! 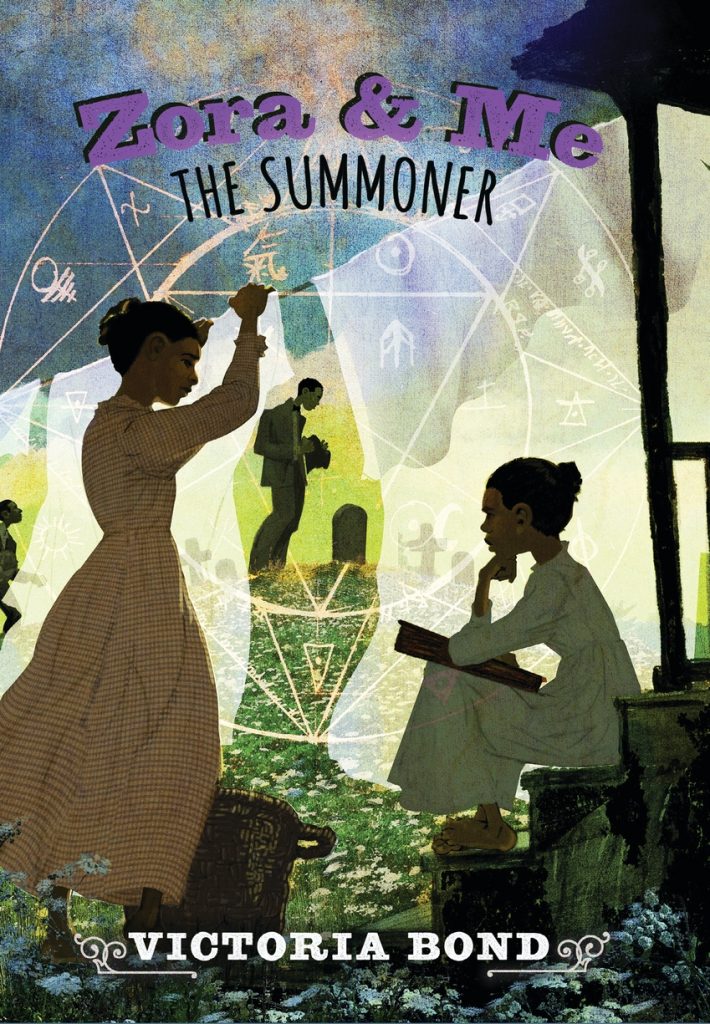 In the finale to the acclaimed trilogy, upheaval in Zora Neale Hurston’s family and hometown persuade her to leave childhood behind and find her destiny beyond Eatonville.

For Carrie and her best friend, Zora, Eatonville—America’s first incorporated Black township—has been an idyllic place to live out their childhoods. But when a lynch mob crosses the town’s border to pursue a fugitive and a grave robbery resuscitates the ugly sins of the past, the safe ground beneath them seems to shift. Not only has Zora’s own father—the showboating preacher John Hurston—decided to run against the town’s trusted mayor, but there are other unsettling things afoot, including a heartbreaking family loss, a friend’s sudden illness, and the suggestion of voodoo and zombie-ism in the air, which a curious and grieving Zora becomes all too willing to entertain.In this fictionalized tale, award-winning author Victoria Bond explores the end of childhood and the bittersweet goodbye to Eatonville by preeminent author Zora Neale Hurston (1891–1960). In so doing, she brings to a satisfying conclusion the story begun in the award-winning Zora and Me and its sequel, Zora and Me: The Cursed Ground, sparking inquisitive readers to explore Hurston’s own seminal work.

This is the final book in the Zora and Me trilogy. How did your writing and editing process differ for the final book? Was there anything about writing from a craft perspective that was a lot easier or more difficult for a final book in a series?

The first Zora and Me novel was published in 2010, so it’s been a decade-long journey. I worked with my Trilogy co-creator Tanya on the first book. Tanya wrote the second book and I wrote the third, which I started working on in earnest in 2015. And that’s all to say that the hardest part of working on The Summoner was working on it alone, without Tanya! Thankfully, the trilogy editor Mary Lee Donovan shed a light on my ideas that helped me untangle them. Part of what made working on the book difficult was that I wanted to layer so many things into the story. Some were aspects of Hurston’s biography, like the relationship between her parents. Other elements touched on Hurston’s anthropological writings about Voodoo and zombies. I wanted to write about why good people would elect a bad leader. I was also determined to explore some-way, some-how, the racist history of medical research.

What kind of research did you do for the Zora and Me series? What was one of your favorite things to learn during the research process?

I’ve read and reread Hurston: Her novels, stories, plays, essays, and autobiography. I’ve read Valerie Boyd’s wonderful biography of Hurston Wrapped in Rainbows a few times. I return to the work of living-legend Alice Walker, who is largely responsible for the revival of Zora’s work in the late 1970s, to do a spiritual check on my aims. I process how Walker’s work always opens up my spirit to joy and heartache and I try to sprinkle some of that intensity in my own writing. Also, over the years I have returned to the work of Hurston’s contemporaries such as Langston Hughes, Jessie Redmond Faucet, Nella Larsen, and Wallace Thurman. To get a sense for the time in which Hurston lived and wrote, I’ve found it incredibly useful to consider the preoccupations of some of the folks Hurston knew, hung out with, and fell out with, which was, unfortunately, the case with Langston Hughes.

My research specifically for The Summoner began heating up in 2013 when I read the writer and scholar Marina Warner’s Fantastic Metamorphoses, Other Worlds. It’s an essay collection about transformation and there’s a chapter that discusses Hurston’s anthropological writing on the Haitian zombie. By this time, I was familiar with the idea of the zombie being rooted in the history of enslavement and economic exploitation in the Western hemisphere. But because of Warner, I started reading up on the history of science. Down that rabbit hole, I learned that the corpses of enslaved people in 19th America were transported across the country for use as cadavers in medical research. In many places, medical research on white cadavers was banned. Marilyn Nelson’s Fortune’s Bones: The Manumission Requiem which memorializes the life of a Black enslaved man whose skeleton was preserved by his physician-owner touches on these issues. The academic book Bones in the Basement: Postmortem Racism in 19th-century Medical Training, details the Medical College of Georgia’s history of racism toward Black people even after we were dead. For me, there was something so horrible and visceral about this history that I couldn’t let it go. For Black people, racism has often reached beyond the grave to touch us. I think middle-grade readers, especially now that as a country we’re grappling with white supremacy and systemic racism, deserve to know that. This history is a way of immediately getting at how the insanity, stupidity, and malevolence of racism attacks and attempts to erase Black people’s humanity.

For this series, you and T.R. Simon co-write the first book, Simon authored the second, and you authored the third. Why did you choose to do it this way rather than co-authoring all three novels?

For years, Tanya and I tried to settle on a story for the second novel. There were elements of each other’s outlines that we liked, but whenever either of us would try to wrench those elements into a single novel, in at least two drafts, the work was just not coherent. We decided to divide those ideas out into the final two installments and I am so pleased with where we landed, and how connected and cohesive each volume remains to the first. More than that I’m relieved that Tanya and I remain friends and such proud co-creators of this series!

I start with a plot. This book always ended with Zora leaving Eatonville. But by the third draft, I became more of a panster because by then I could see that the book was actually evolving from all the work I did to address the countless mistakes that were baked into my original outline.

Are there any historical fiction tropes, or common plot devices, that you absolutely love, and any that you dislike and tend to avoid?

I love a stranger coming to town. I love a town eccentric. I love a character with a past. I love an old person with stories. I run toward plot devices. I rely on my use of language to counter some of my addiction to clichés.

What other books do you think the Zora and Me series is in conversation with?

I know there are more but these are the ones that immediately come to mind:

Jonah’s Gourd Vine, Their Eyes Were Watching God, Mules and Men, Dust Tracks on a Road and Barracoon by Zora Neale Hurston

The Color Purple by Alice Walker

Hope is our Only Wing by Rutendo Tavengerwei

Do you have any recommendations for published or forthcoming children’s and YA books?

I will always recommend The Astonishing Life of Octavian Nothing, Volumes I & II by M.T. Anderson. Those novels are so completely realized and so exquisite that I hope they are read by as many kids in as many classrooms as they possibly can be. I love all of Ibi Zoboi’s books, especially My Life as an Ice Cream Sandwich. I just read The Stars and the Blackness Between Them by Junauda Petrus and was blown away by its lyricism. Woke: A Young Poet’s Call to Justice by Mahogany L. Browne, Elizabeth Acevedo, and Olivia Gatwood is just everything. I’m also really looking forward to Lupe Wong Won’t Dance by Donna Barba Higuera. I think it comes out in September.

I’m going to go for one from the miscellaneous column. I would love it if people asked me about native trees in New Jersey where I grew up and also in upper Manhattan where I lived for a long time. One of the joys of my adult life has been learning about trees with my husband and son. A place changes when you learn about what grows there. It’s an ongoing learning experience that every day I walk outside alters my mind and heart for the better. 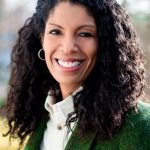 Victoria Bond is the coauthor, with T. R. Simon, of the John Steptoe New Talent Author Award winner Zora and Me. She holds an MFA in creative writing and is a lecturer at John Jay College of Criminal Justice, City University of New York. Victoria Bond lives in New Jersey with her family.