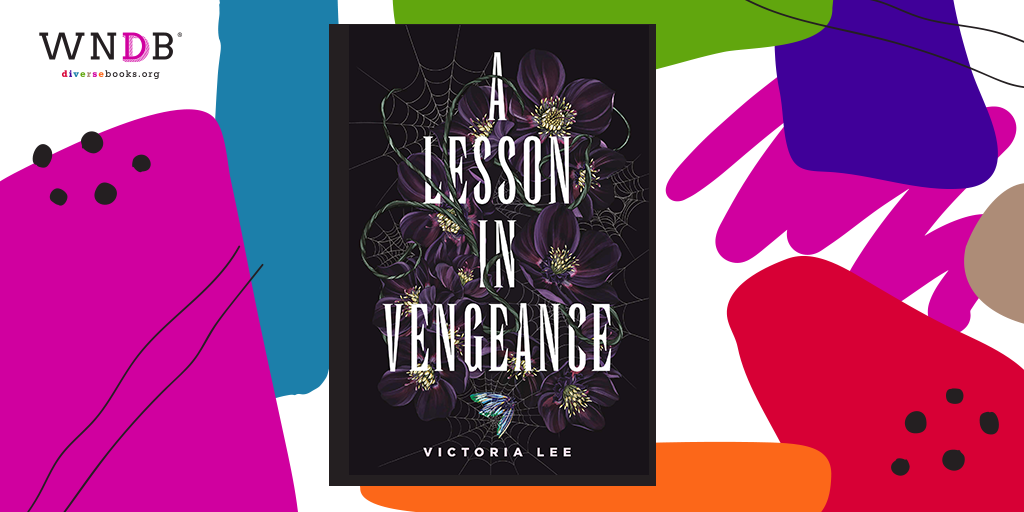 Today we’re pleased to welcome Victoria Lee to the WNDB blog to discuss A Lesson in Vengeance. 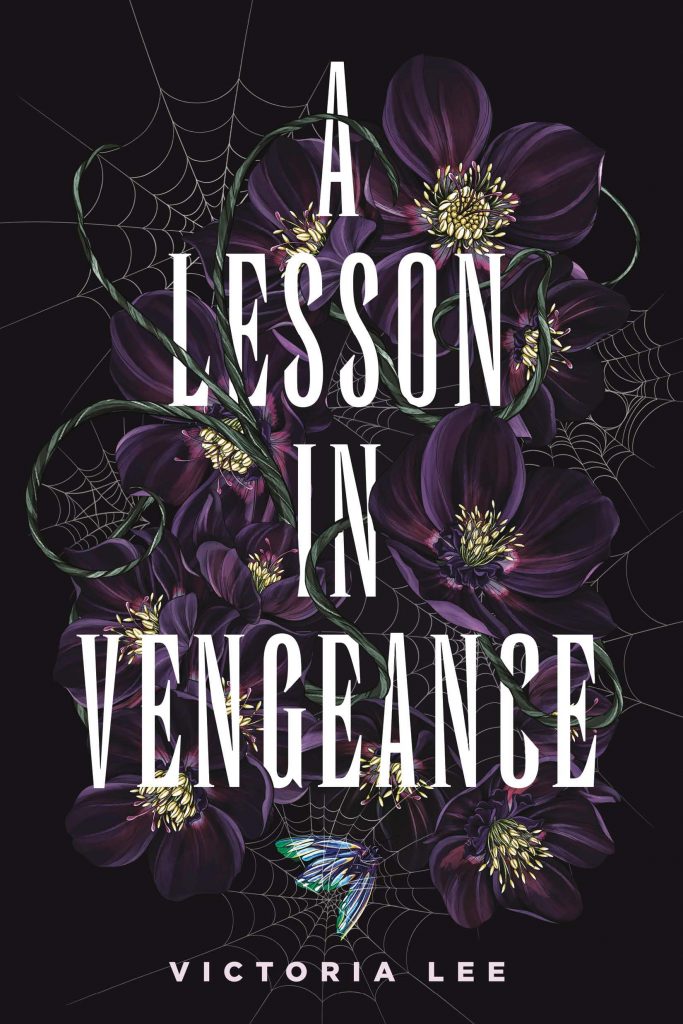 Felicity is an unreliable narrator. I loved that throughout the story, I could never quite tell if she was being honest with herself or with the other people in her life. Why did you choose to have an unreliable narrator and how did you craft the distinct versions of Felicity—the person she wants to be and the things she wished happened, and who she really is, and what really happened?

As someone who has struggled with psychotic depression, as Felicity does in the book, it was important to me to try to create an atmosphere where the reader could share at least a small part of the self-doubt and confusion, and self-gaslighting that can occur in the context of severe mental illness. I also think it’s easy in the context of trauma to construct new narratives that are more palatable for us than reality, especially for those of us who are, let’s say, um, especially keen on literary hobbies. It made sense to me that as an avid reader, and as someone experiencing trauma and grief alongside mental illness, Felicity would try to shape her own story to match a narrative that was more appealing than the truth.

The world-building in A Lesson in Vengeance is incredible. It’s so atmospheric and spooky; I really felt as though I were living in Godwin House at Dalloway School. How did you come up with the Dalloway School and the Dalloway Five, and build Felicity’s world?

I always wanted to go to a boarding school growing up. Unfortunately for me, my parents wouldn’t let me (like I said, I was severely mentally ill, and unlike Felicity’s mother, my family thought sending me to school in a different state when I was struggling so much was probably a bad idea). Fortunately for me, I have a lot of friends who went to boarding school, including fancy prep schools like Dalloway, and who were delighted to help me brainstorm all things Dalloway. It definitely isn’t supposed to be ‘realistic’ in a lot of ways, like, the school is more of a device than a real school. So to that end, a lot of my development of Dalloway’s history, its vibes, its rules, etc, was in the service of creating an environment that would put specific pressures on Felicity and make it harder for her to heal from her trauma.

One of the major themes in A Lesson in Vengeance is the fine balance that people walk between passion and dangerous obsession, and the things someone might do for their work/art. Why did you want to explore this and why were Felicity, Ellis, Alex, and the rest of the characters the right people to explore that with?

I recently completed my Ph.D., which is an exercise in walking that line between passion and obsession. You are encouraged to single-mindedly focus on a minute topic, to make it your life (hobbies are discouraged), but if that goes too far—if you become ruminative instead of just hyperfixated, if you become compulsive instead of devoted, if the demands of academia start to crush you, you are told that you simply do not belong in the ivory tower and should quit and do something easier. I see similar attitudes reflected in the writing industry sometimes, where authors are told it’s normal to write thousands of words every day, that a truly dedicated author would, where you’re expected to be the writer but also the digital marketing team, graphic designer, webmaster, and events coordinator—to have boundaries with readers but also to be authentic and vulnerable—and I’ve seen it break people.

With A Lesson in Vengeance, and with these characters, I wanted to construct an environment like these. The characters are undoubtedly passionate about their fields (whether it’s literature for Felicity, writing for Ellis, or sport climbing for Alex), and in various ways, they have to grapple with the distinction between loving something a lot and loving something too much. That’s an even harder line to tread if you’re already dealing with mental health issues.

Despite the fact that she died prior to the beginning of the book, Felicity’s late girlfriend Alex has a strong fingerprint on the DNA of this story. How did you map out the two timelines, the one shown through Felicity’s memories and the one playing out in real-time?

My usual philosophy when writing is to dispense information only when it becomes absolutely necessary for understanding. It’s a good way to maintain suspense. So basically, I only dipped into the history with Alex when we arrived at a point in the story where we needed those details in order to progress forward.

Have you learned anything since publishing the Feverwake series that you took into your writing and revising process for ALIV?

I like to think we learn something from every book. After I published The Fever King, I used to say I hoped it was the worst novel I ever publish. So far, I think that is still true! I want to improve my craft with every subsequent book. ALIV is super different from the Feverwake series—it’s trying to do different things, so it uses different tools to accomplish them—but I do think the skills I developed in Feverwake played a role in helping me complete the story. Not just in terms of craft and technique, but also in terms of time management and revision, and dedication. I was better able to see the finish line, so I knew what I was writing toward more than I did with my debut.

ALIV strongly explores the ways in which women’s anger, passion, and desires are viewed as dangerous and even labeled as witchcraft. The book is full of morally ambiguous characters just like the Feverwake series. Was there any additional pressure in writing morally grey women characters, especially queer women, after publishing Feverwake?

I do think that we give male characters a lot more room to be morally ambiguous than we do female and nonbinary characters. The themes of the book mirror the way we think about women, even fictional ones, in real life. These pressures are compounded by axes of marginalization. I would hope that as readers go, if they find themselves judging female characters harshly, they question whether they would feel the same way about a male character in the same circumstance. And that’s not to say the female character doesn’t deserve the harsh judgment, just that there’s a gap here. 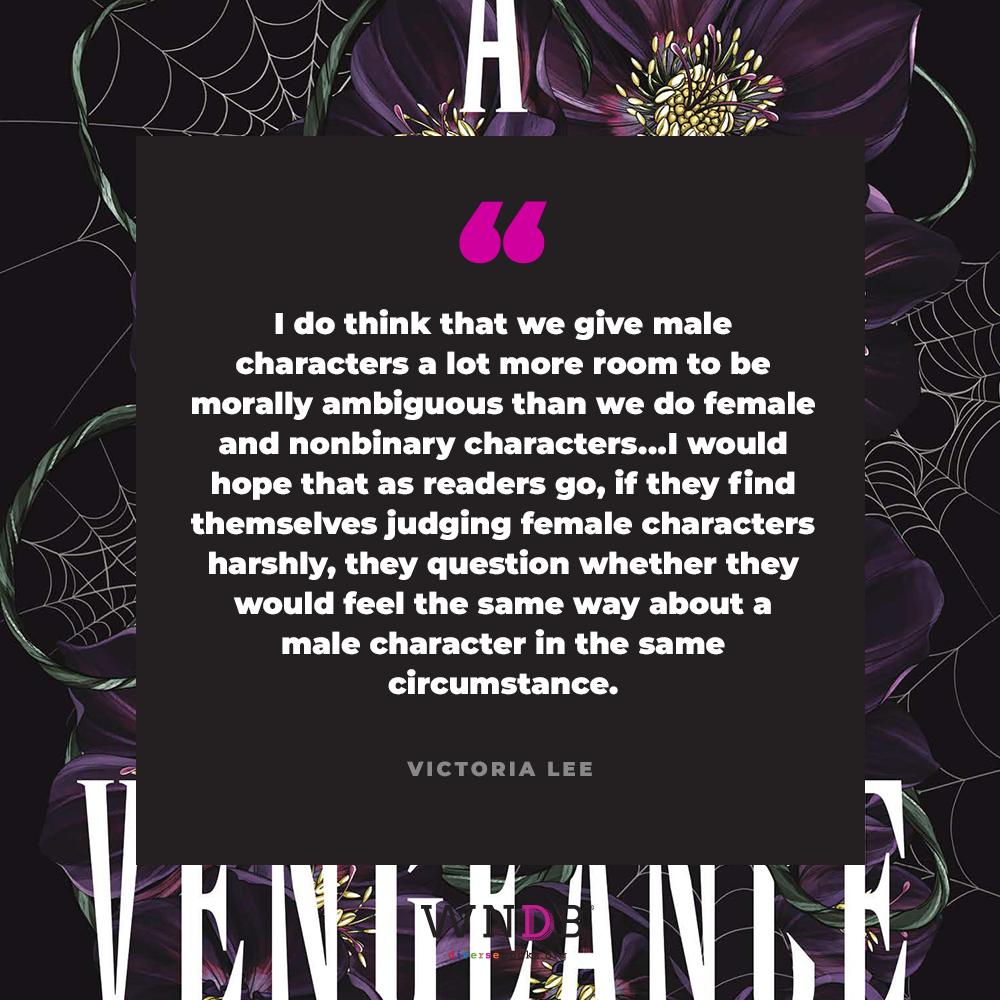 Since ALIV is a thriller and there are myriad mysteries to be solved, I’m curious if you knew how the book would end (and how these questions would be resolved) from the start, or if you developed that over the course of writing and revising?

I had a general idea of how it would end, but the details made themselves clear as I went on! That’s usually how I write: I have the gist, and maybe the big tentpole/milestone moments, then I fill in the details as I go.

If the characters in A Lesson in Vengeance showed up on your doorstep in real life, who do you think you’d get along with best?

Probably Leonie, to be honest. She’s passionate but she also has a level head on her shoulders and is eminently sensible. I like that combo.

The descriptions of the love of learning and profound passion for studying subjects in depth came across as very authentic, and I know you have a PhD in psychology (congratulations, by the way). Do you consider yourself an academic, perhaps even a dark academic? Why do you think dark academia calls to so many readers?

I do consider myself an academic—I work at a university, after all! As far as ‘dark’ academic goes, less so now than in the past. I have struggled with depression and suicidality throughout my academic career, and it’s only now that I’m out of grad school that I’m finally starting to feel lighter. I think dark academia appeals to readers who still care deeply about academia or about their special interests, but who are also aware of the oppressive and sometimes abusive nature of the academy. It’s a way to explore your love for a subject with a healthy degree of criticism for the institutions that support it.

If you were going to design a panel to promote this book, what would it be about? What other authors would you want to invite to be on it with you?

Hmm, maybe it would be about mental illness representation in queer fiction, and it would include Alice Oseman, Adib Khorram, Tess Sharpe, Adam Silvera, and Ashley Schumacher. (Why so many A names? I don’t know.)

Can you tease anything about other projects you’re working on, including short stories or future novels?

I’m working on a YA book that’s like the Umbrella Academy with murder lesbians, and hopefully, that will come out in 2022. (More soon!) I’m also playing around in the adult category with an angsty romance and a dark fantasy.

What other books do you think A Lesson in Vengeance is in conversation with? And do you have any recommendations for forthcoming or published YA novels?

Probably Ninth House, Wilder Girls, The Secret History, and If We Were Villains are the closest comps for ALIV.

Some of my favorite recent/forthcoming YA books include Six Crimson Cranes by Elizabeth Lim (literally the platonic ideal of YA fantasy in my opinion!), How We Fall Apart by Katie Zhao (AAPI dark academia), The Inheritance Games sequel by Jennifer Lynn Barnes, Grown by Tiffany D Jackson (I cried), Jade Fire Gold by June CL Tan, and All Of Us Villains by Amanda Foody and Christine Herman.

I’m also highly anticipating The Dead and the Dark by Courtney Gould, the next Legendborn book by Tracy Deonn, and the third book in the Good Girls’ Guide series by Holly Jackson.

I wish someone would ask me which spice I would take with me to a desert island so that I could say the answer is ginger.

Victoria Lee grew up in Durham, North Carolina, where she spent her childhood writing ghost stories and fantasizing about attending boarding school. She has a Ph.D. in psychology, which she uses to overanalyze fictional characters and also herself. Lee is the author of A Lesson in Vengeance as well as The Fever King and its sequel, The Electric Heir. She lives in New York City with her partner, cat, and malevolent dog. Visit her online at victorialeewrites.com and follow her on Twitter and Instagram @sosaidvictoria.

Previous Post: « Q&A With Nafiza Azad, The Wild Ones
Next Post: Bridges & Books Podcast Is Putting the Teen Back in Teen Lit »
Applications are open for Literary Agents of Chang