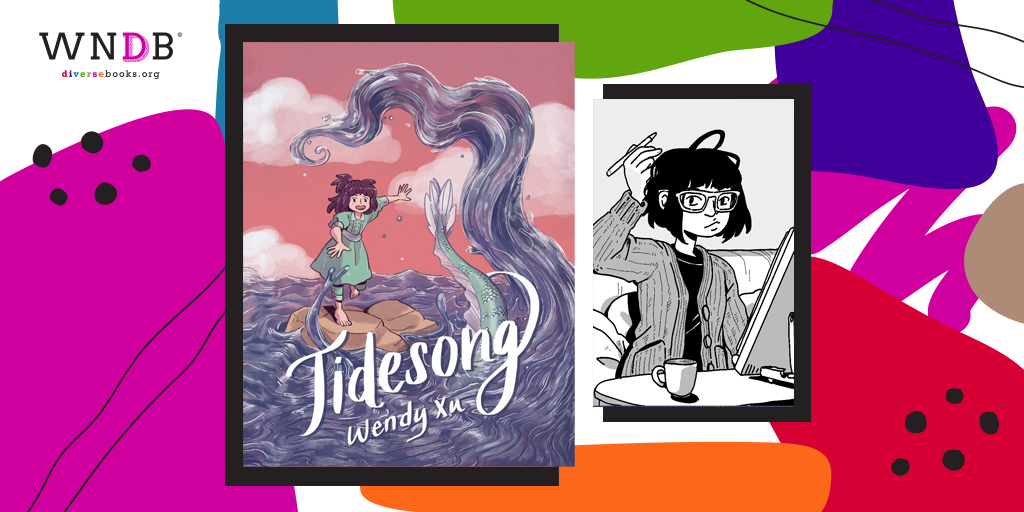 Perfect for fans of Studio Ghibli and The Tea Dragon Society, this is a magically heartwarming graphic novel about self-acceptance and friendship.

Sophie is a young witch whose mother and grandmother pressure her to attend the Royal Magic Academy—the best magic school in the realm—even though her magic is shaky at best. To train for her entrance exams, Sophie is sent to relatives she’s never met.

Cousin Sage and Great-Aunt Lan seem more interested in giving Sophie chores than in teaching her magic. Frustrated, Sophie attempts magic on her own, but the spell goes wrong, and she accidentally entangles her magic with the magic of a young water dragon named Lir.

Lir is trapped on land and can’t remember where he came from. Even so, he’s everything Sophie isn’t—beloved by Sophie’s family and skilled at magic. With his help, Sophie might just ace her entrance exams, but that means standing in the way of Lir’s attempts to regain his memories. Sophie knows what she’s doing is wrong, but without Lir’s help, can she prove herself? 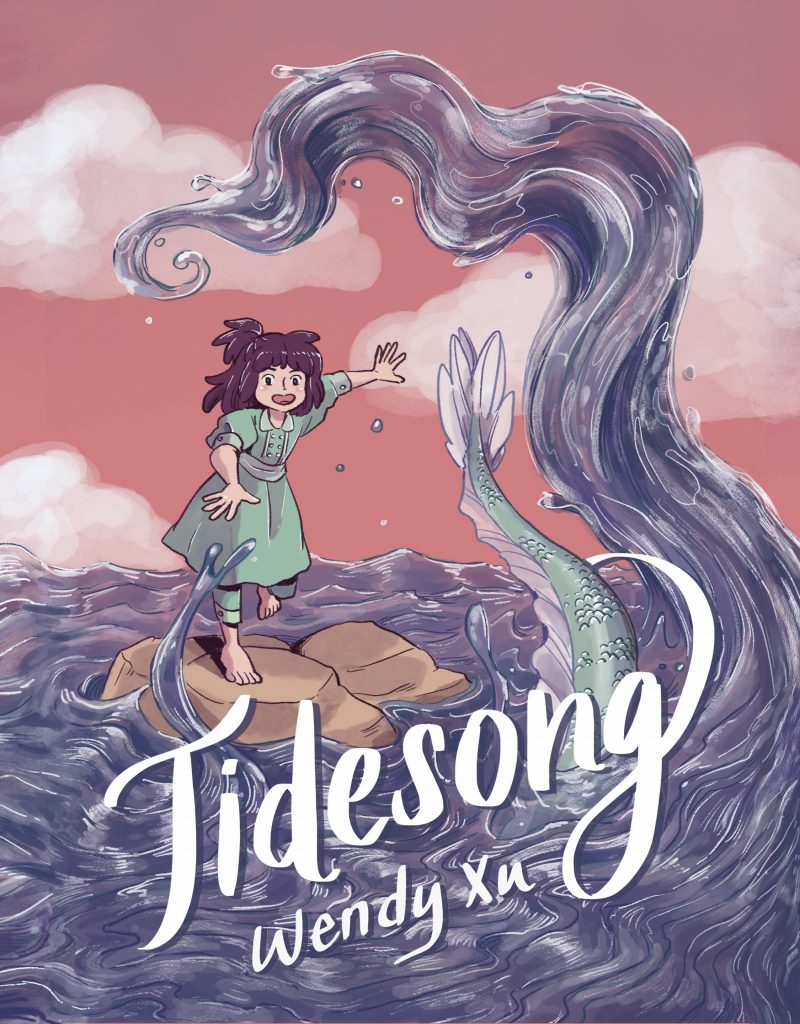 Congratulations on your solo debut! How has your art and storytelling evolved since the publication of Mooncakes? What medium(s) did you use to draw Tidesong?

Thank you very much! Every book is a learning process. I feel like with Mooncakes I was trying to get the hang of having a process at all for drawing a 200+ page book, but for Tidesong that process went out the window as I tried to navigate creating a style that would be more middle grade-friendly. I’m not a huge stickler for a single personal style. I feel like it should be tailored to the project. I definitely did a lot more worldbuilding and “pre-production” art for Tidesong to really nail down the colors and linework I wanted to use for it. I looked at a lot of different things from the art of PONYO to old-fashioned New England scrimshaw carvings. I ended up going with softer lines than Mooncakes, and definitely brighter colors—if Mooncakes is a fall palette, Tidesong is the heat of summer by the ocean. I drew and colored Tidesong entirely in Procreate from beginning to end.

Where did the idea for Tidesong come from? When you were working on this book, did you write the story first, then the art, or did you create both simultaneously? Was it hard to find a balance and know when to let the art vs words do the storytelling?

I had so many people tell me after an unsuccessful first pitch for a fantasy YA (not Mooncakes, something else—I think we pitched Mooncakes and Tidesong simultaneously, believe it or not) that I should write middle grade and my voice would be really well-suited. So the idea for a younger-audience story was already rattling around my head, I just didn’t know what it would be. My solid story ideas always come first and foremost from a piece of art. I drew a kid wearing a pinafore. I thought about a setting that I really enjoyed (the sea in Maine). I thought about how I wanted something a little less “kid saves the world” and more personal, but still fantasy. I actually write and draw at the same time. When I’m doing sketches for pages I often do the art first and then write in dialogue as I see fit. For comics, it’s absolutely imperative to always let the art do the storytelling when it can, to use background details as you would a piece of descriptive dialogue, and to let the words be more of a confirmation than the star of the show. I always let the art go first. As a practical matter, you can very easily correct dialogue, but the feeling of the story is in the art, which is harder to correct.

What was your favorite part about writing Tidesong? What was the most challenging part?

Well, since it’s comics, the question has to be “what is your favorite part about drawing Tidesong,” haha. I love inking. That’s when the art really starts to come alive. The most challenging part is a question I keep in mind when writing any kind of fantasy: “What metaphor does this visually and tonally represent?” It doesn’t have to fit a real-world situation perfectly but to figure out how broad or narrow you want that metaphor to be can be difficult.

Were there any challenges or unexpected surprises to writing a middle grade book?

I didn’t want it to be preachy. I really hope it’s not super preachy. I hate it when books are super moralistic towards children, but one thing I did want to impart is that it is very important for the adults in your life to apologize when THEY are wrong. So if that was preachy, I will own that! 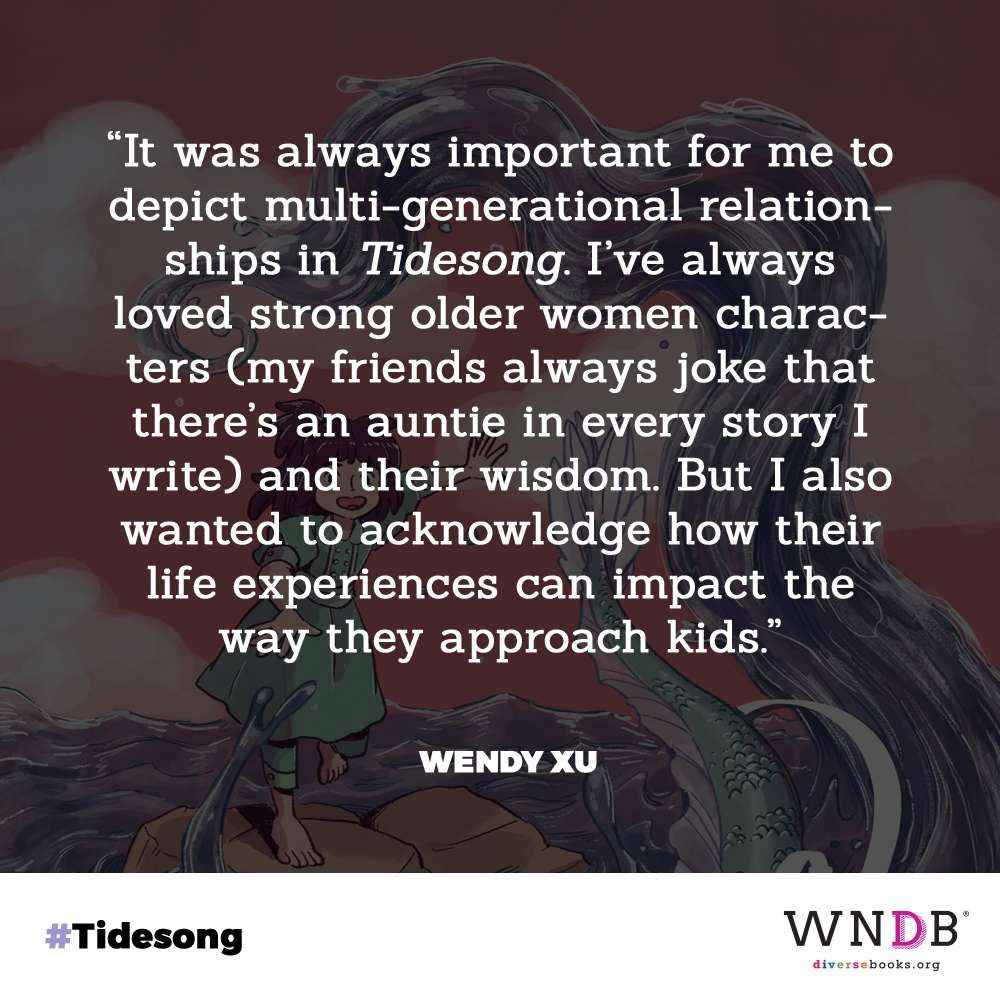 The color palette and art is so lovely. It’s definitely reminiscent of Studio Ghibli. Was there a particular Studio Ghibli movie, character, or soundtrack you were drawn to while working on Tidesong?

Thank you! Studio Ghibli is definitely one of my biggest inspirations. I was actually looking through the artbook for Ponyo, and a good friend of mine (also a Harper author, Ethan Aldridge) pointed out that all of the backgrounds are drawn in soft, wobbly lines. There’s no perfect perspective. With Mooncakes, I was a stickler about using perspective rulers and guides and having straight lines, but with Tidesong, I definitely borrowed the Ponyo sensibility of using lines that were just a little bit wonky. I think that’s a better representation of how a human eye sees anyway (your eyes are always making lots of little micromotions) and lends itself well to the atmosphere of the story. Ponyo also utilizes a lot of flat colors for the characters on top of beautifully painted backgrounds, which really makes the characters pop, and I borrowed from that as well.

Sophie is very curious, headstrong, and impatient whereas Lir is more calm, patient, and intuitive. One of my favorite elements of the story is how you portray their relationship with the perfect touch of heart and humor. How did you navigate creating each character and the evolution of their friendship?

I am often told “you’re so impatient”, so Sophie’s impatience definitely comes from my own experiences as a kid. But I knew from the very beginning that someone as ambitious as she is had to have a friend to temper her expectations, and that’s how Lir came about. I was also reading the Arthur Waley translation of Journey to the West as well as in the middle of a rewatch of the 1986 series, and it struck me how over-the-top stuffy and bureaucratic the entire spirit world was. It was hilarious, but it led me to wonder what it would be like as a child to grow up in such an environment, and I feel like you would have to be a little bit more mature and patient to deal with all of the procedures and formalities of the court. I’ve also always been a little obsessed with the motif of memory in stories and what it would be like to have it taken away. So I kept all of these things in the back of my mind as I was creating their relationship.

I love the inter-generational aspect of family included in Tidesong and how you included different personalities and approaches to magic. What was the process like of writing and illustrating their interactions and incorporating these themes of family?

Thank you! It was always important for me to depict multi-generational relationships in Tidesong. I’ve always loved strong older women characters (my friends always joke that there’s an auntie in every story I write) and their wisdom. But I also wanted to acknowledge how their life experiences can impact the way they approach kids. In earlier drafts of Tidesong, Sage had a much bigger role, but my editor pointed out that she was in the story too much and there wasn’t enough Sophie. I wanted Sage to be the kind of big sister I always wished I had, but she had to take a backseat to Sophie figuring stuff out on her own, too. She couldn’t handhold the way I made her do so in earlier drafts! Auntie, in earlier drafts, was actually a ghost. But in the end, I realized there wasn’t much purpose to making her a ghost other than spooky-funny hijinks that she could also do as a living person, and that she’d be more impactful as a flesh-and-blood person in this fantasy world than a dead one. The terrorization of a ghost can only go so far… but an auntie who is alive? Whew.

You’ve put a lot of thought into the ecology and wildlife of Shulan and really brought the world to life, not just through magic but through the setting as well. (The chicks were my favorite!) In addition to your own childhood of crabbing and tidepooling, did you do any research or other activities to help inspire your worldbuilding and story?

YES! In the summer of 2019, in the early-ish days of beginning production on Tidesong, I took a trip to the Bay Area with some friends. Hiking around the Muir Woods and going to the Monterey Bay Aquarium was so inspiring, and gave me a taste of West Coast ecology that I had never seen before. The forest and cliffs around the Bay Area were so beautiful, I had to incorporate them. They became part of Shulan in the forest around Eugenia’s house (also on a hill) and Auntie’s house on a cliff. I really liked seeing the fat sea lions lounge around on rocky beaches, too—that was a big inspiration for where all the little dragons hang out. The chicks were inspired by a 2016 exhibit at the Museum of Natural History here in NYC called “Dinosaurs Among Us,” featuring lots of feathered models. I especially loved Tianyulong confuciusi, a tiny dinosaur discovered in China—that was the direct inspiration. This is the model they used at the exhibit (photo from A Dinosaur a Day). The round body was most of what I kept, lol: 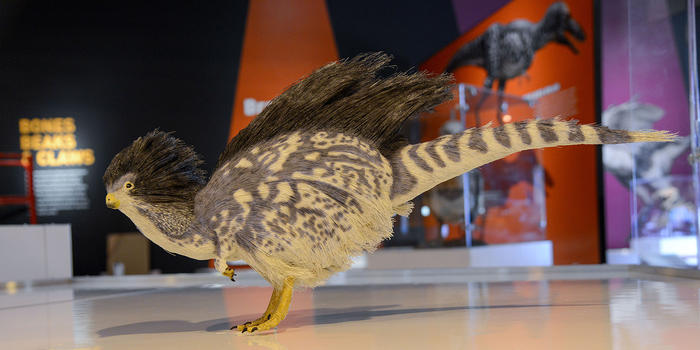 What is a question you wished you were asked more often, and the answer?

“What brush do you use”… the answer is, MANY. I am a bit of a digital brush hoarder, I’m always tweaking and looking for the PERFECT one-brush-does-all but perhaps I should just give up and realize that whatever I do will always utilize a combination of them. But now, what is the perfect COMBO? I’m still looking for that…

I’m currently in the sketch stages of my next book, The Infinity Particle, which is a YA sci-fi set on Mars about a girl and a robot who fall in love. Tonally, stylistically, artistically, I hope it’s all different from anything I’ve done so far. While it’s sci-fi, I’m actually hoping to incorporate MORE design elements of the natural world into the backgrounds based on cutting-edge research that’s happening today. There’s a great episode on a Netflix series called Abstract: The Art of Design about Neri Oxman, one of the scientists who is researching that kind of thing in her lab at Harvard. 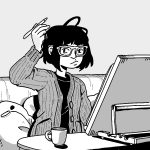 She is the co-creator of “Mooncakes”, a young adult fantasy graphic novel published in 2019 from Lion Forge Comics/Oni Press. Her work has been featured on Catapult, Barnes & Noble Sci-fi/Fantasy Blog, and Tor.com, among other places. You can find more art on her instagram: @artofwendyxu or on twitter: @angrygirLcomics.