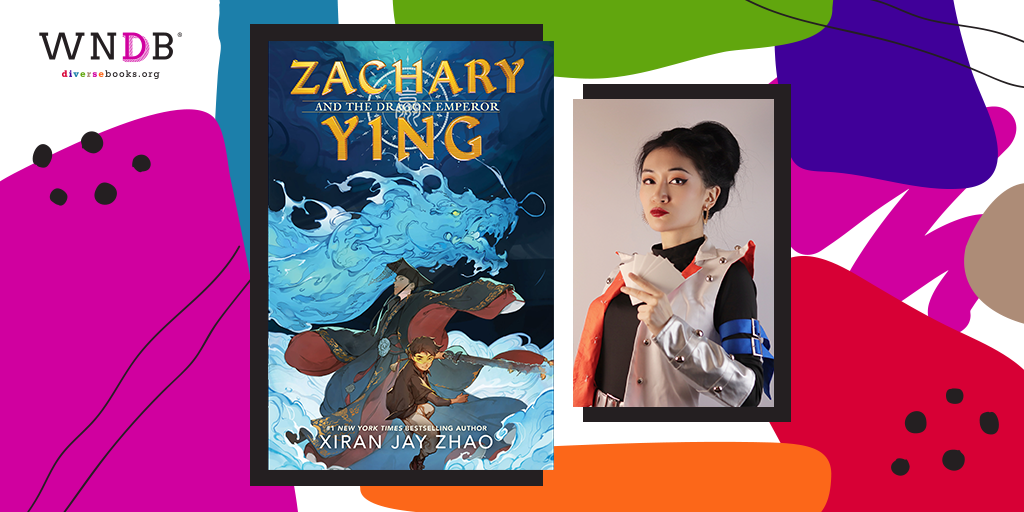 Today we’re pleased to welcome Xiran Jay Zhao to the WNDB blog to discuss middle grade fantasy Zachary Ying and the Dragon Emperor, out May 10, 2022!

Zachary Ying never had many opportunities to learn about his Chinese heritage. His single mom was busy enough making sure they got by, and his schools never taught anything except Western history and myths. So Zack is woefully unprepared when he discovers he was born to host the spirit of the First Emperor of China for a vital mission: sealing the leaking portal to the Chinese underworld before the upcoming Ghost Month blows it wide open.

The mission takes an immediate wrong turn when the First Emperor botches his attempt to possess Zack’s body and binds to Zack’s AR gaming headset instead, leading to a battle where Zack’s mom’s soul gets taken by demons. Now, with one of history’s most infamous tyrants yapping in his headset, Zack must journey across China to heist magical artifacts and defeat figures from history and myth, all while learning to wield the emperor’s incredible water dragon powers.

And if Zack can’t finish the mission in time, the spirits of the underworld will flood into the mortal realm, and he could lose his mom forever. 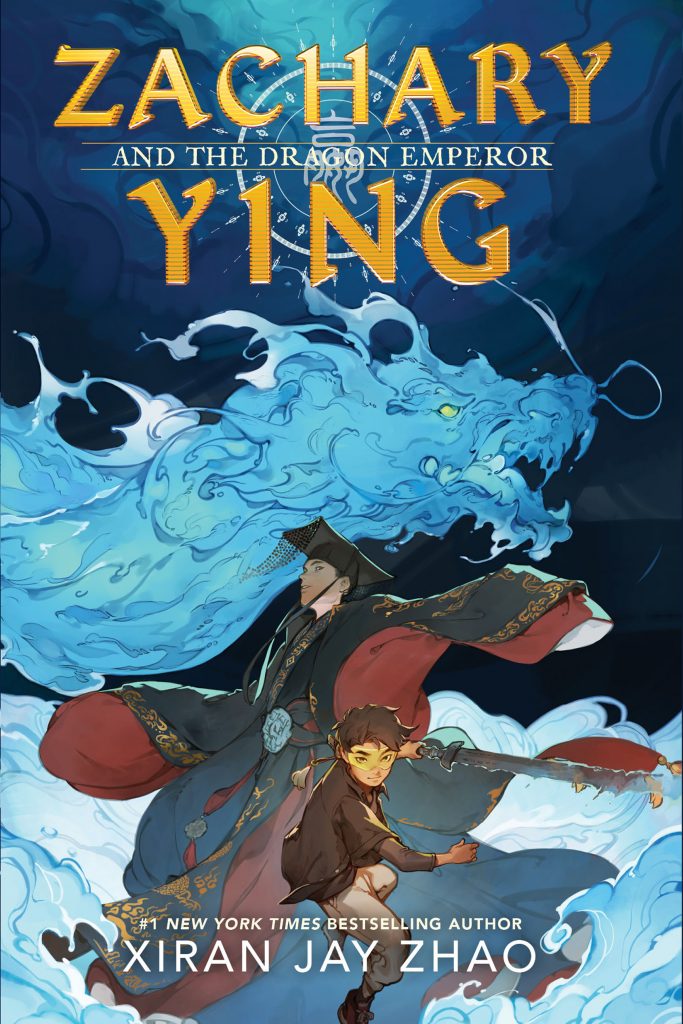 The way in which the emperors communicate with the children is rather unique. Why did you have the emperors’ possession take place through AI technology?

Magic and technology are so often kept separate in the cozy niches of fantasy and sci-fi that I really love media that play with how they can mix together. A lot of my favorite anime, like Yugioh, do exactly this, and it always blows my mind when the science-y characters use technology to “hack” magic, such as when Seto Kaiba came up with the idea of hologram monsters after seeing Yami Yugi use magic to bring the monsters in their card game to life. Qin Shi Huang possessing Zack’s AR gaming headset is my take on the weirdness that can come with magic colliding with science!

Writing this book no doubt required considerable knowledge of Chinese history and culture. What was the research process (or pulling from your own experiences) like?

I already had so many historical and mythical stories in my head that I wanted to tell that I didn’t need to do much extra research besides double-checking that my facts were legit. Whenever I saw an opportunity in the plot to bring up a fun anecdote, I went for it. My first draft was actually stuffed with many more of them, and I had to cut a few out to make the book less overwhelming!

Throughout, Zack grapples with trusting the mission of the emperor he is bound to and learning about the less-than-heroic deeds the same emperor has committed. Why did you want to portray this tension?

Popular media has this tendency to either glorify or vilify historical figures into one-dimensional characters who are easy to wrap your head around, but I don’t agree that this is the best way to approach history, especially when talking about history to children. Kids are capable of understanding complexity. When I went to school in China, the curriculum made it very clear that the First Emperor was a terrible person but also probably the most important figure in our history ever. I think Zack’s complicated relationship with him kind of mirrors Zack’s complicated feelings about China itself. Complexity is interesting to write about!

Do Zack’s relationships (with his mother, Chinese friends, American friends, or emperor friends) reflect any of your own relationships?

Zack’s mom’s slightly overbearing quality is kind of inspired by my mom, though my mom doesn’t enjoy science at all. The other characters aren’t really based on anyone else I know.

During his time in China, Zack struggles to communicate with the locals and occasionally feels out of place as someone who has been raised in Maine his whole life. What do you hope to convey in portraying this struggle?

The diaspora experience of being trapped between multiple worlds and not fitting in cleanly in any of them is pretty central to Zack’s story. He faces discrimination in both America and China. There’s just no winning—unless you stop playing the game of trying to squeeze yourself into a neat, palpable identity and instead stand proud of what makes you unique. This is something Zack will have to learn on his journey. 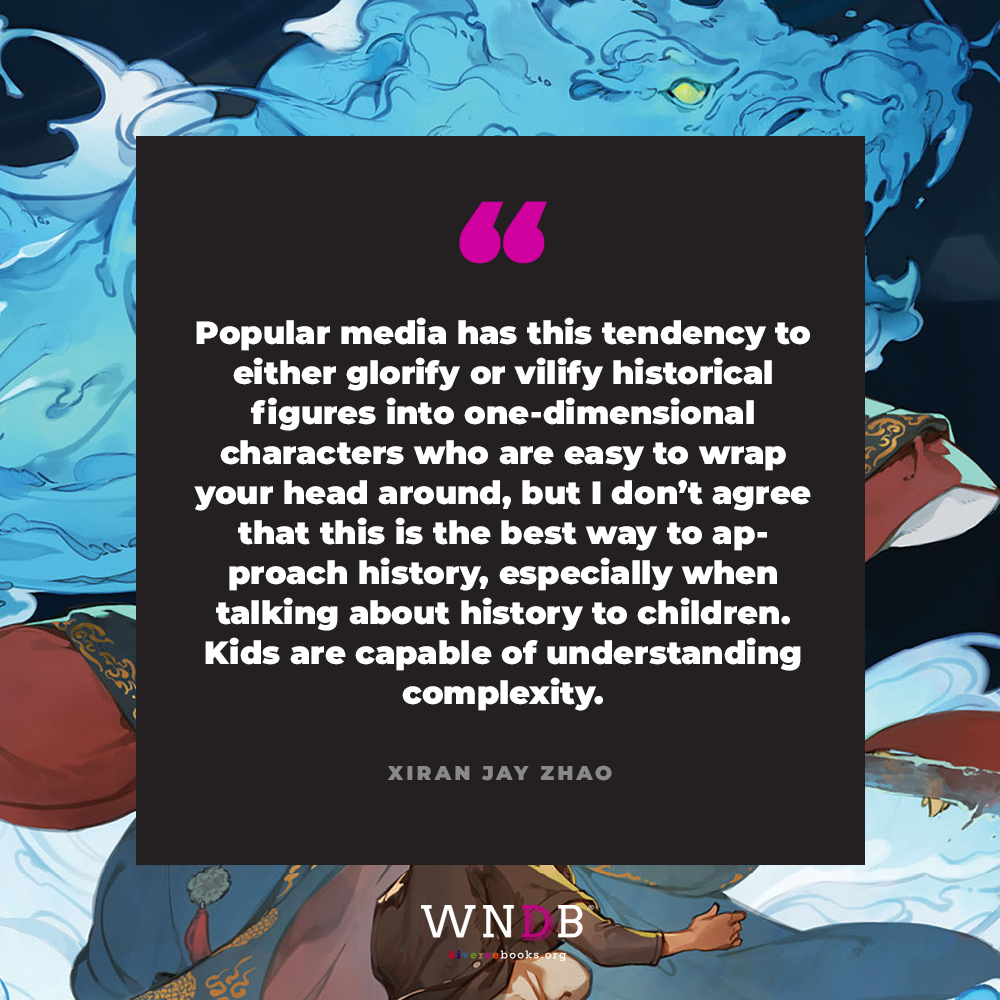 As one of the only Chinese people at his school in Maine, Zack to some extent feels insecure about his heritage. Considering how awkward, impactful, and perhaps volatile middle school can be, are any of Zack’s decidedly more perilous and fantastical battles in China allegorical to the middle school experience?

I never thought of things this way, but he definitely learns to stand up for himself more as he goes through his battle-filled journey, even pulling off victories because, as someone in the diaspora coming in touch with the traditional stories of his heritage for the first time, he’s able to interpret them from a fresh perspective. He’ll be a more confident kid when he goes back to Maine for sure!

I noticed you dropped a few anime references throughout the novel. Can you name some of the shows that may have inspired this novel (and which one is your favorite?).

Yugioh, Dragon Ball Z, and Code Geass! And Pokemon GO, if we’re including anime-adjacent media. Yugioh is of course the main inspiration, though it’s specifically Yugioh Zexal that inspired the AR gaming system of Mythrealm.

This is a bit of a strange question, but bear with me: one day, Zack will come home from his ordeal, hopefully victorious but exhausted and hangry. He deserves an elaborate meal for which he has been homesick. Which dishes would you feed him and why?

I’m not certain about the origins of this dish (it’s heavily associated with Northwest China though) but a big hot bowl of Hulatang (AKA spicy soup) would be amazing comfort food. He can dip some sangza into it, which are these fried noodles of either Hui or Uighur origins.

If you were to host the spirit of a legendary figure, who would it be and why?

I’d want to host the First Emperor’s famous chancellor Li Si, just because I want to grill him about what really happened on the day the First Emperor died. Legend has it that Li Si was involved in a conspiracy to fake the emperor’s last will to execute Fusu, his eldest son and presumed heir, and install his youngest son Huhai instead. I’d corner Li Si for answers to this and also a bunch of other mysteries about the emperor.

What can you tease about the sequel as of now?

Magical cyborgs may or may not be involved!

Are there any books, middle grade fantasy or otherwise, that you would recommend to those who loved Zachary Ying?

There are so many amazing POC-penned science-fantasy MG books coming out this year! Look out for:

Onyeka and the Academy of the Sun by Tola Okogwu

Theo Tan and the Fox Spirit by Jesse Q. Sutanto

Hana Hsu and the Ghost Crab Nation by Sylvia Liu 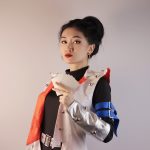 Xiran Jay Zhao is the #1 New York Times bestselling author of the Iron Widow series. A first-gen Hui Chinese immigrant from small-town China to Vancouver, Canada, they were raised by the internet and made the inexplicable decision to leave their biochem degree in the dust to write books and make educational content instead. You can find them @XiranJayZhao on Twitter for memes, Instagram for cosplays and fancy outfits, TikTok for fun short videos, and YouTube for long videos about Chinese history and culture. Zachary Ying and the Dragon Emperor is their first middle grade novel.

Previous Post: « Q&A With Ryan La Sala, The Honeys
Next Post: Q&A With Natalia Sylvester, Breathe and Count Back From Ten »
Agents: @literaryagentsofchange is looking for men