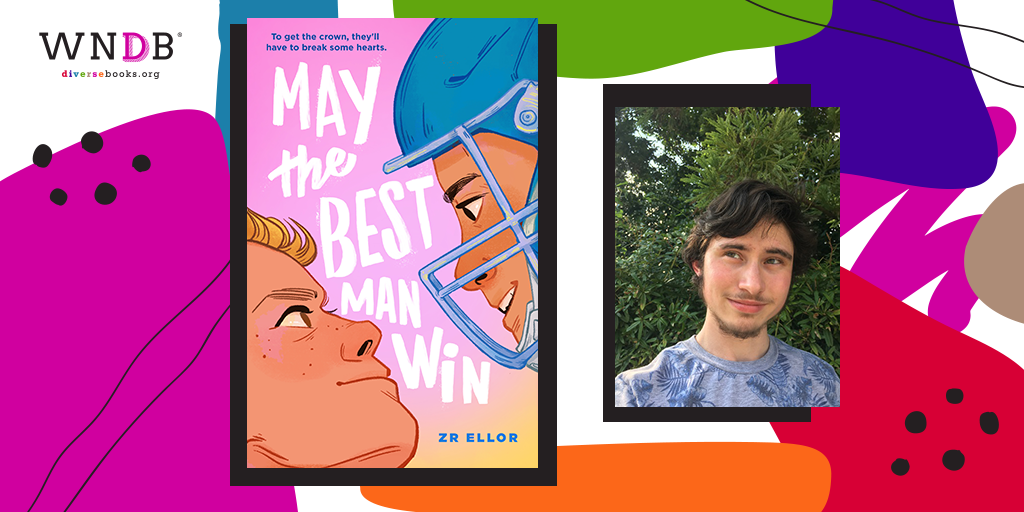 Today we’re pleased to welcome ZR Ellor to the WNDB blog to discuss his YA novel May the Best Man Win, out May 18, 2021!

A trans boy enters a throw-down battle for the title of Homecoming King with the boy he dumped last summer in ZR Ellor’s contemporary YA debut.

Jeremy Harkiss, cheer captain and student body president, won’t let coming out as a transgender boy ruin his senior year. Instead of bowing to the bigots and outdate school administration, Jeremy decides to make some noise—and how better than by challenging his all-star ex-boyfriend, Lukas for the title of Homecoming King?

Lukas Rivers, football star and head of the Homecoming Committee, is just trying to find order in his life after his older brother’s funeral and the loss long-term girlfriend—who turned out to be a boy. But when Jeremy threatens to break his heart and steal his crown, Lukas kick starts a plot to sabotage Jeremy’s campaign.

When both boys take their rivalry too far, the dance is on the verge of being canceled. To save Homecoming, they’ll have to face the hurt they’re both hiding—and the lingering butterflies they can’t deny. 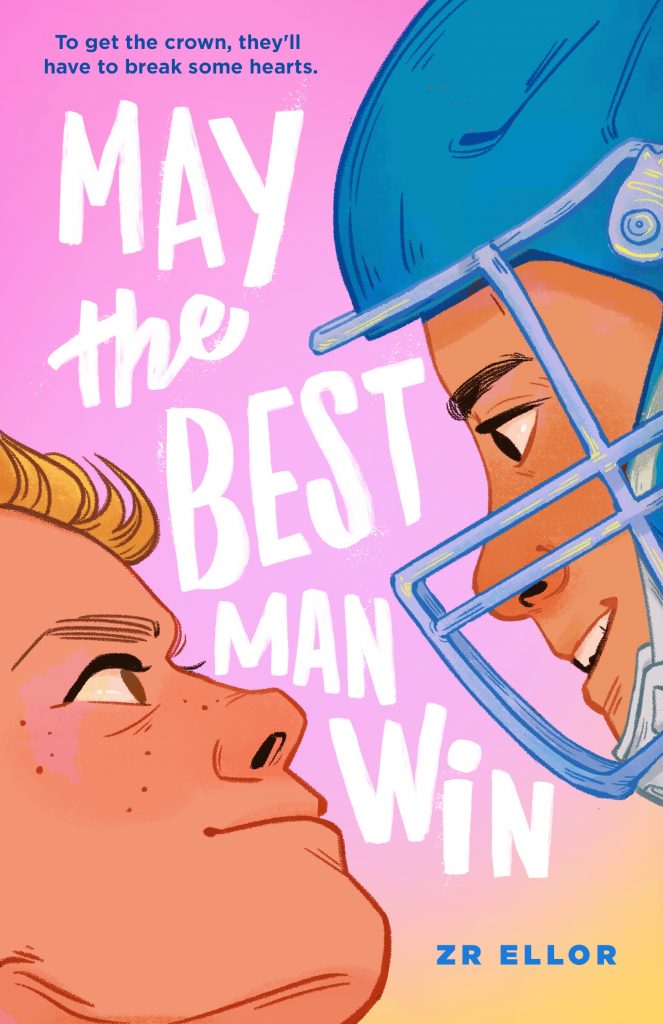 May the Best Man Win is a contemporary, but world-building is just as important in this setting as it would be in SFF. Can you tell us how you built out Jeremy and Lukas’s world?

Yes! I actually started as an SFF writer. May The Best Man Win is my first contemporary novel, and I was really inspired by the Homecoming festivities at my own high school. But because it’s such an over-the-top party, I wanted it to feel fleshed out and believable to readers. To do that, I made Lukas part of the Homecoming Committee, working hard to bring a once-a-year celebration to life. In turn, that helped develop his character, both his perfectionism and his genuine enthusiasm for the event.

Jeremy and Lukas go to a school that says it supports them, but they’re often left to figure things out on their own. Why did you want to touch on this issue in their story?

The staff of Cresswell Academy are great examples of ‘performative allyship’ and how that has looked in my own experiences. They’re willing to make easy changes to accommodate trans students, such as accepting Jeremy’s name change and using his correct pronouns, but they refuse to do the hard work of changing the school to make it a truly safe space. Ultimately, their allyship is more about them than the people they’re trying to help, which not only exposes Jeremy and Lukas to harm but weakens their ability to trust others.

Both Jeremy and Lukas are allowed to be flawed, complex characters, who make mistakes as individuals and in their relationship with each other. How did you balance that with writing their growth as characters and their journeys?

One reason I wanted to do dual narrators in this book was to show how nothing happens in a vacuum. Jeremy and Lukas are both influenced by each other, in ways they don’t always understand but become clear to them and the reader over time. They’re also influenced by their school and their families, neither of which are quite as supportive as they need. Oftentimes, when we or a person we care about is acting out, there’s something wider in their world at play. By showing what drives Lukas and Jeremy to act as they do, I hope readers will learn to look beyond the surface when a friend is struggling.

Did you do any research for this book and if you did, what’s one of your favorite things you learned?

Beyond the central tension of the book, May the Best Man Win is also about self-love, expressing who we are, and our relationships with our community and chosen families. How did you weave those aspects into the story and why did you choose to explore them?

Going into this book, I knew Jeremy’s struggle would be rooted in how coming out as trans has changed his relationships with everyone he knows and loves. He struggles to feel accepted by people who once welcomed him without question, especially his mother. Self-love, self-expression, community, and chosen family are the answers so many trans people find to these questions, and they’ve been pivotal in my journey as well. Jeremy doesn’t always understand the questions he’s asking of the world, but I knew he would find his answers here.

Are you a plotter or a panster and did you surprise yourself at all with the writing process for this book?

Both! When I’m drafting, I generally outline two or three chapters ahead of my current position. I like having some idea where I’m writing to next, as well as having the flexibility to adapt things further down the line should a new idea occur. What surprised me about this book was how easy the first draft came out—it only took me three weeks to write! It was like I’d had the character voices inside me all along, and the second I let them speak, they had a wonderful world full of things to say.

If you could design your dream panel to promote this book, what would it be about? What other authors would you love to have on it with you?

I would love to speak on a panel about reinventing high school stories. May The Best Man Win explores a lot of traditional teenage tropes—Homecoming, bullying, a cheerleader dating a football player—but with a queer twist. You Should See Me In A Crown by Leah Johnson and Only Mostly Devastated by Sophie Gonsalez also insightfully explore and update many of the tropes, and it would be so cool to talk about the choices they made in taking apart and rebuilding these narratives for modern teens.

If the characters in May the Best Man Win showed up on your doorstep in real life, who do you think you’d get along with most? And who would honestly grate on your nerves even though you love them?

I think I’d get along with Lukas best—he’s (mostly) always got a calm head on his shoulders. Jeremy has too many of my worst features, and is sort of always primed to be upset—not that I can blame him for that, with the year he’s had! But Jeremy shares my habit of anxious catastrophizing about extreme events, so I don’t think we’d be good to hang out together, even though I wish him all the best! We’d drive each other up a wall.

What other books do you think May the Best Man Win is n conversation with?

I read early drafts of Between Perfect and Real by Ray Stoeve, and The Passing Playlist by Isaac Fitzsimons, while working on May The Best Man Win. Both are excellent books about transmasculinity, and both have very different main characters. One is about a well-grounded trans boy who loves theater, and one is about a quiet trans boy who plays soccer. It’s incredible to me that all three books come out within six weeks of each other—and I hope they show readers there’s not one way to be trans!

I would love to talk more about why I chose to write such flawed narrators for this book! Truth be told, I think trans communities can sometimes be more places of conflict than places of healing—the trauma of living in a transphobic society is very real, and unfortunately, we tend to lash out at one another when we’re hurt because of something unrelated. To me, Jeremy’s bad behavior is a direct result of the situation he’s in as a trans teen, a situation he’s unable to navigate perfectly no matter what he tries. And I wish people would focus less on the flaws of a single character and more on the systems that drive them to act as they do. 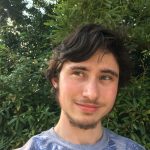 ZR Ellor is an author and literary agent from the Washington, DC area. An avid lifelong reader, he wrote his first novel when he was twelve years old and never put down his pen. He graduated from Cornell University in 2016 with a dual degree in biology and English literature. His non-literary interests include running, travel, and global cuisine. May The Best Man Win is his debut novel.

Previous Post: « Q&A With Camryn Garrett, Off the Record
Next Post: The Many Different Sides of Korean Diaspora Identity »
LAST CALL for WNDB 2023 Internship Grant Partners!