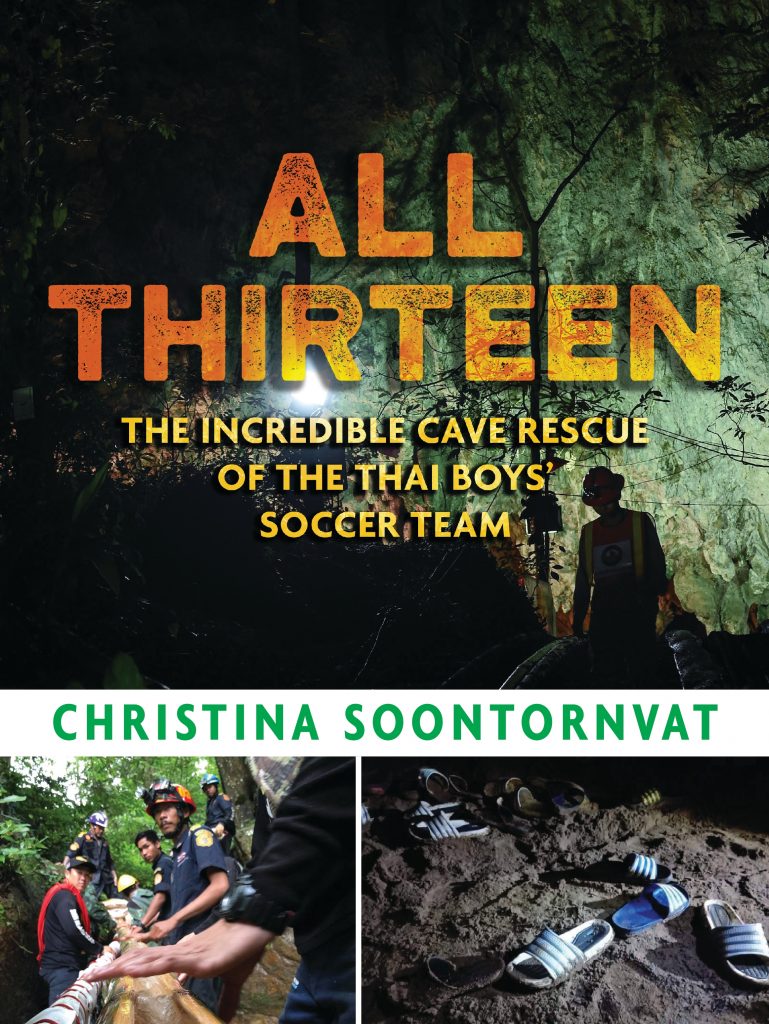 Today we’re pleased to reveal an exclusive excerpt from All Thirteen: The Incredible Rescue of the Thai Boys’ Soccer Team by Christina Soontornvat, which publishes on October 13, 2020.

On June 23, 2018, twelve young players of the Wild Boars soccer team and their coach enter a cave in northern Thailand seeking an afternoon’s adventure. But when they turn to leave, rising floodwaters block their path out. The boys are trapped! Before long, news of the missing team spreads, launching a seventeen-day rescue operation involving thousands of rescuers from around the globe. As the world sits vigil, people begin to wonder: how long can a group of ordinary kids survive in complete darkness, with no food or clean water? Luckily, the Wild Boars are a very extraordinary “ordinary” group. Combining firsthand interviews of rescue workers with in-depth science and details of the region’s culture and religion, author Christina Soontornvat—who was visiting family in Northern Thailand when the Wild Boars went missing—masterfully shows how both the complex engineering operation above ground and the mental struggles of the thirteen young people below proved critical in the life-or-death mission. Meticulously researched and generously illustrated with photographs, this page-turner includes an author’s note describing her experience meeting the team, detailed source notes, and a bibliography to fully immerse readers in the most ambitious cave rescue in history.
ALL THIRTEEN. Copyright © 2020 by Christina Soontornvat. Reproduced by permission of the publisher, Candlewick Press, Somerville, MA.

The Cave of the Sleeping Lady

Coach Ek leads the twelve members of his team up the steps to the mouth of Tham Luang. On the way, they stop to bow and pay their respects at a shrine to Jao Mae Nang Non, the Sleeping Lady. She is said to have been an ancient princess who fell in love with a servant. Knowing her father, the king, would never approve, she ran away with her lover, and the two of them hid inside the cave. But when the servant went out to look for food, he was captured and killed by the king’s soldiers. The heartbroken princess killed herself. Her blood became the water flowing in the cave, and her body became the mountain. If you look at the Nang Non mountain range at the right angle, you can see the outline of her face and body.

For many of the people of northern Thailand, caves are particularly sacred places that deserve respect. In the ancient stories, these caves are homes to monsters who have lured in princes. They house giants who were defeated by the Buddha himself. Some caves contain entire temples inside them, and Buddhist monks have been known to spend years meditating in the darkness within. A mountain holds power, and a cave provides a way to tap into that power. But as the story of the Sleeping Lady shows, that power can be both enticing and dangerous.

As the boys step inside Tham Luang’s impressive entrance chamber, they breathe in the damp air and the smell of wet, mossy limestone. The ceiling soars to more than 30 meters, about 100 feet, and the whole chamber is big enough to hold a 747 jet. Thick stalactite spires hang down like dragon teeth. Over thousands of years, water that dripped down from the ceiling left behind tiny deposits of calcium minerals that hardened into the sparkling formations. When the dripping water lands on the cave floor, it can also build a stack of minerals that grows from the ground up, called a stalagmite. When a stalactite and a stalagmite meet, they can form a column or even a flowing curtain of shiny stone.

The Wild Boars gaze up at the slick cave walls. Six meters (20 feet) up, a dark line of mud marks the highest level of the last flood. The floor of the cavern is dry and packed down by heavy foot traffic.

The first 600 meters (2,000 feet) of the Tham Luang cave system are made up of big, airy rooms like the entrance chamber. Beyond this point, the cave narrows. Some sections force visitors into a crouch and then a crawl, where the ceiling drops to just a few feet high. Here, cavers are well beyond the “twilight zone,” the part of the cave where light from the outside world still reaches. Without a flashlight the darkness is complete. If you are claustrophobic, this is where you turn around.

But the boys aren’t deterred by the tight spaces, and there are no barriers, gates, or ropes to stop them from continuing on. The cave winds along, down steep and slippery sections. About one mile in, the route makes a sharp hairpin turn and dumps into a three-way junction called Sam Yaek, in Thai.

The right-hand path leads to a lesser-explored stretch known as the Monk’s Series. On the left, an opening low in the wall leads to the main cave. In caving lingo, the phrase “it goes” means that a passage continues on, without a dead end. To the left, Tham Luang “goes,” and it goes quite far. The most recent survey measures the known end of the cave system to be 11 kilometers, or almost seven miles, away from the entrance.

At first, the Wild Boars have no intention of going nearly that far. They’ve already spent more than their one hour of time and really should be turning back. But now that they’re here, deep into the cave, they fall into the allure that all cavers know well: What if we go just a little farther?

At Sam Yaek, they kick off their shoes, drop their backpacks, and head left.

Past the junction, Tham Luang pitches its visitors into more tight squeezes. Even without claustrophobia, you might get uneasy when the walls close in tight enough to force you to slither forward on your belly. You might feel out of your element here, thinking of all the miles of rock both above and beneath. Maybe you imagine getting trapped, being buried under millions of tons of stone. It’s not a pleasant feeling when you still have miles of passage between you and the exit.

Or maybe you are someone who views being inside a cave quite differently. A cave is one of the most serene places you can go. It’s no wonder that Buddhist monks have been known to seek out caves for long meditations. It is cool and fairly quiet. Without all the distractions that surround you aboveground, you can focus on the small things that you usually never notice, like the soft echo of your breath against the rocks.

And yet a cave is not sterile. A cave has a life of its own. In Tham Luang, if you hold quite still, you can feel it “breathing,” a light whisper of air flowing through the system. Maybe being this deep in the earth gives you the same perspective as astronauts floating high above it: a sense that you are a very tiny part of a very large universe.

The boys wriggle through tight spaces that cavers call squeezes and boulder chokes, where stones that fell from the ceiling long ago have clogged up the passages. They tromp up and down sandy, gravelly slopes. Their bare toes, toughened by years of shoeless soccer matches, grip the slippery rocks as they climb through sections that dip steeply down before pitching back up again. Suddenly, they come upon a pool of water.

He has been in Tham Luang before, and he knows that the cave can hold pockets of water along the route, so he isn’t concerned. However, Coach Ek is the type of leader who doesn’t like to order other people around. Instead, he likes for the group to make decisions together. He wants every boy to feel as though he has a voice. When they come upon the water, he asks if the boys want to keep going.

Sixteen-year-old Thi offers to check how deep the water is. The rest of the team watches as he wades down into the pool and pushes off. Soon Thi is smiling on the other side.

“Come on. You can all follow me!” he calls back to them. His toes touched the bottom the whole way. The water’s a little cold, but they can definitely make it.

The rest of the team follows, with the bigger boys carrying the little ones on their backs.

It isn’t long before that gentle whisper of air they have felt throughout the cave becomes a roar. A sharp draft of wind sends a sudden spray of water droplets onto their faces, startling them. But Coach Ek knows where they are and leads them on.

They have reached a room that locals call Hidden City or Underwater World. Here, the roof lowers over a pool that exists year-round, even in the dry season. The water level of the pool is high right now, which pinches the airflow, making it gust faster. Even with the roaring wind, the room is lovely, in an eerie, haunting sort of way. Names of past adventurers who have reached this point are scrawled into the walls.

Tham Luang still goes, though few people other than the most dedicated explorers have ever made it past this point. Hardly anyone ever gets this far in the first place. It’s a huge accomplishment, especially since some of the boys haven’t even been inside the cave before. The boys have hiked in almost five kilometers, or three miles, and they have done most of it barefoot. In a moment like this, you have to stop and soak it all in.

Coach Ek says that the cave keeps going beyond the pool. But if they want to see it, they’ll have to get wet again, and this time they’ll have to dunk their heads under. Do the boys want to go? Or should they head back?

Thi, the only one on the team wearing a watch, tells the others what time it is. They have spent almost three hours inside already. If they want to be out of the cave in time for Night to make his party, they are going to have to absolutely fly back home. They decide to turn around.

Everyone scrambles and squirms back toward the entrance. They swim back across the water they crossed on their way in. They hustle forward in single file, trying to go as quickly as possible without twisting an ankle on the slippery rocks.

And then Coach Ek hears Bew, who is up at the front of the group, call back to him.

Coach squeezes past the others to the front of the line.

“Hey, are we lost?” one of the boys behind him asks. “Did we take a wrong turn?”

The boys point to the source of their confusion. They should be approaching Sam Yaek, the three-way junction, but now there is a pool of swirling water that wasn’t there before.

The water completely blocks the way forward. The passage they came through is somewhere under the turbulent water, but they can’t see it. 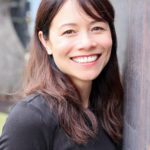 Christina Soontornvat grew up behind the counter of her parents’ Thai restaurant in a small Texas town with her nose stuck in a book. She is the author of the fantasy middle grade series, The Changelings, and the early chapter book series, Diary of an Ice Princess. Her books published in 2020 include the middle grade fantasy, A Wish in the Dark, and All Thirteen, a nonfiction account of the Thai Cave Rescue. In addition to being an author, Christina holds a B.S. in Mechanical Engineering and a master’s degree in Science Education. She spent a decade working in the science museum field, where she designed programs and exhibits to get kids excited about science. She is passionate about STEM (science, technology engineering, and math), and loves learning new things. She lives in Austin, Texas with her husband, two young children, and one old cat.