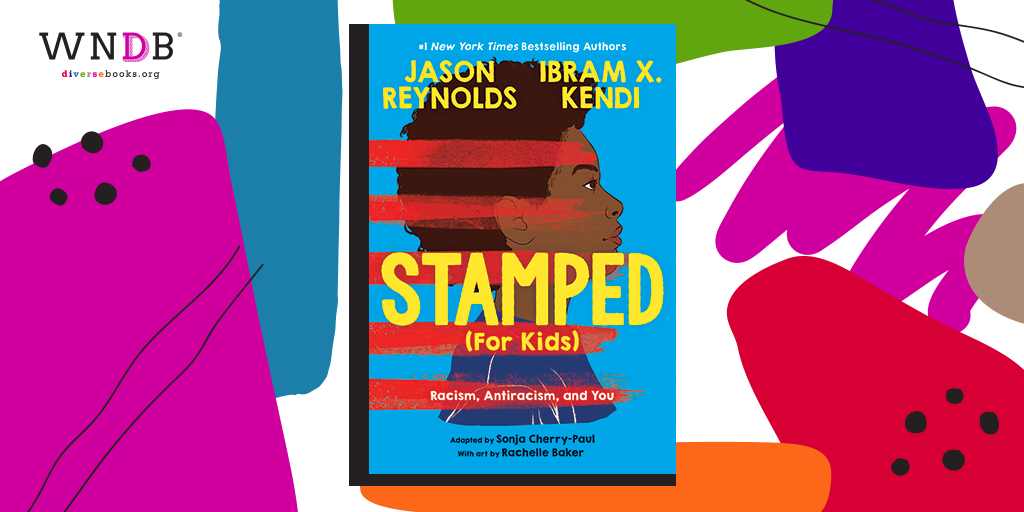 Today we’re pleased to reveal an exclusive excerpt from Stamped (For Kids): Racism, Antiracism, and You by Jason Reynolds and Ibram X. Kendi, adapted by Sonja Cherry-Paul and illustrated by Rachelle Baker, which published on May 11, 2021.

This chapter book edition of the #1 New York Times bestseller by luminaries Ibram X. Kendi and Jason Reynolds is an essential introduction to the history of racism and antiracism in America

RACE. Uh-oh. The R-word.
But actually talking about race is one of the most important things to learn how to do.

Adapted from the groundbreaking bestseller Stamped: Racism, Antiracism, and You, this book takes readers on a journey from present to past and back again. Kids will discover where racist ideas came from, identify how they impact America today, and meet those who have fought racism with antiracism. Along the way, they’ll learn how to identify and stamp out racist thoughts in their own lives. 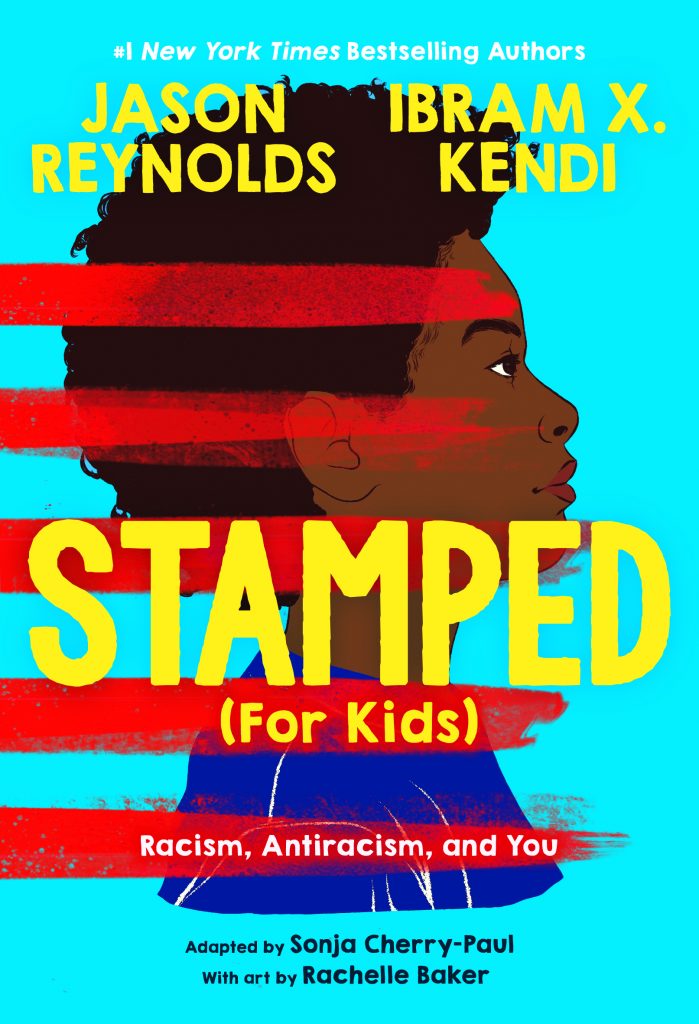 This excerpt is from Chapter 7 and contains the transcript below. 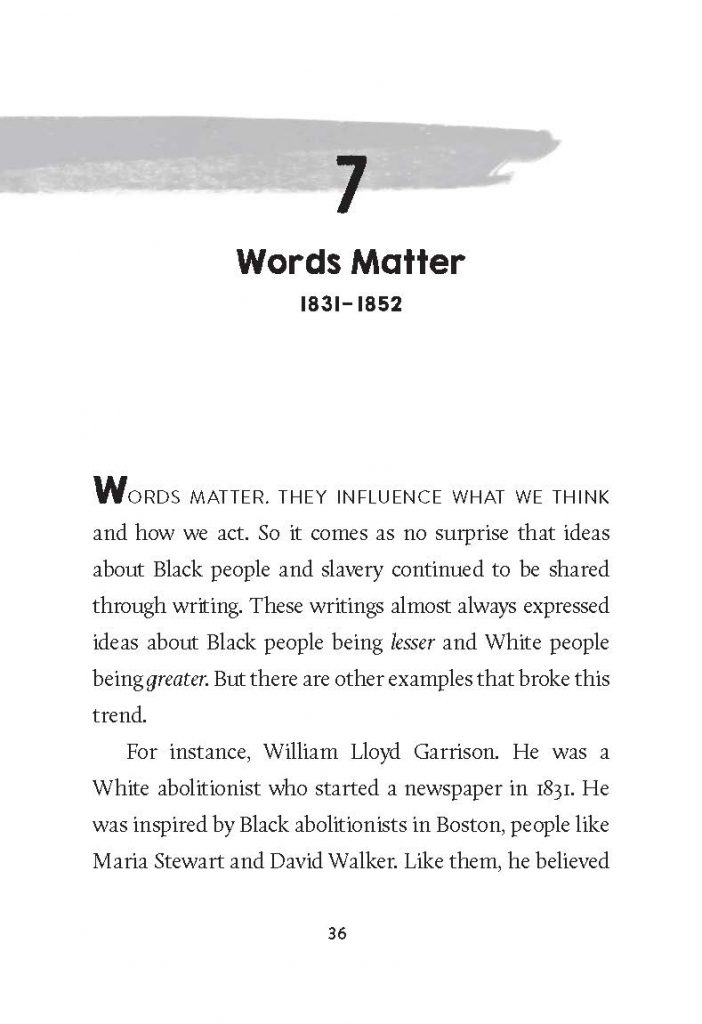 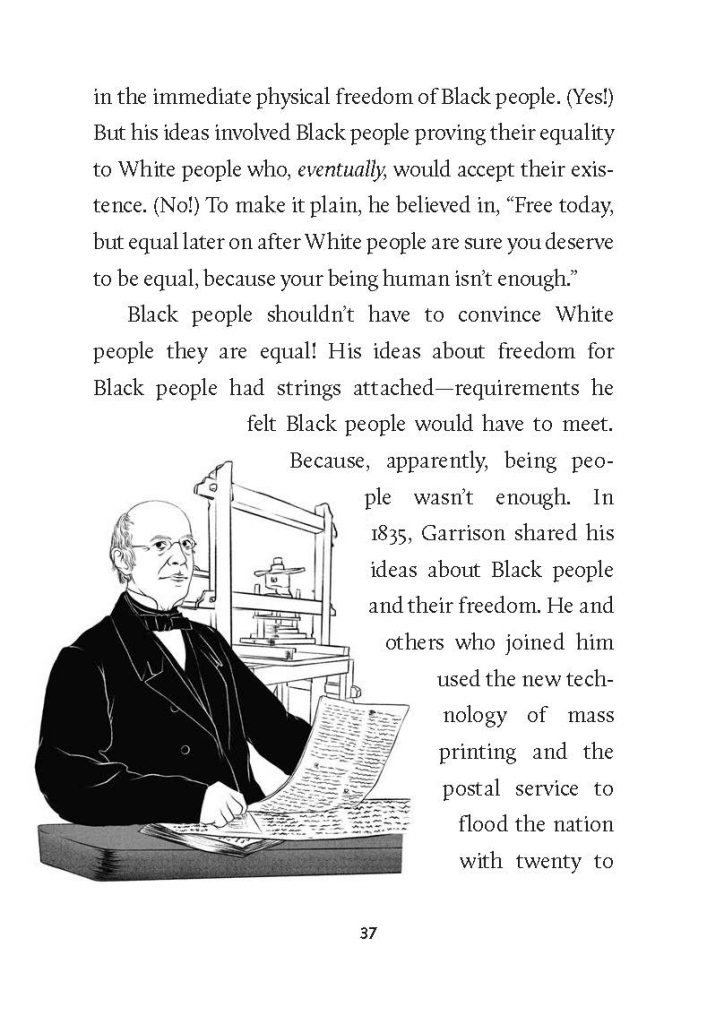 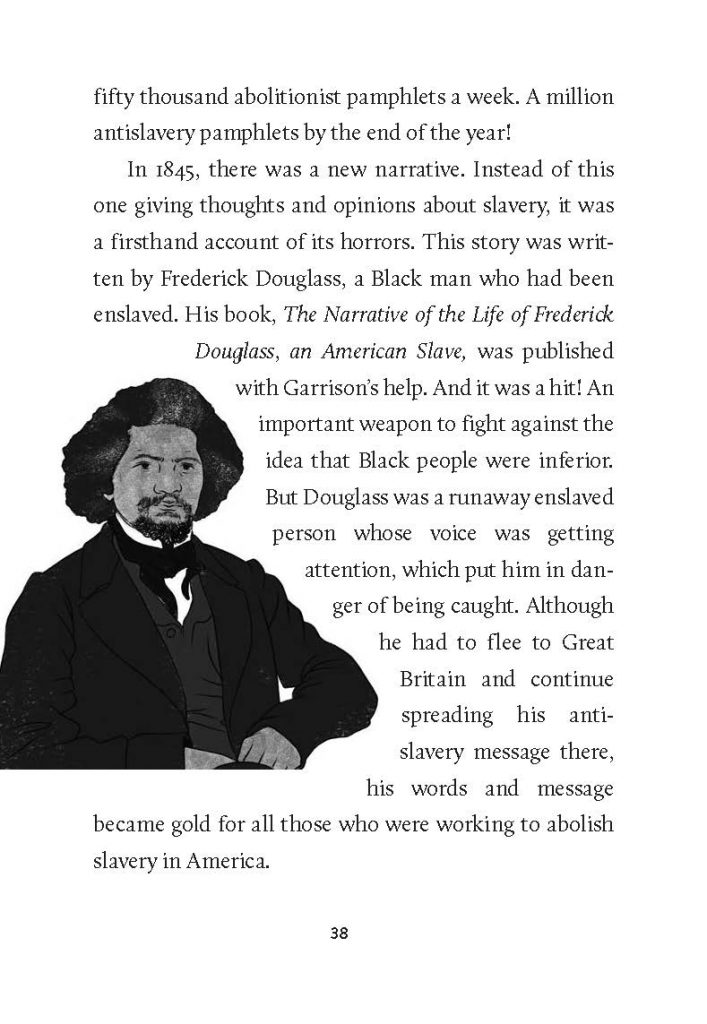 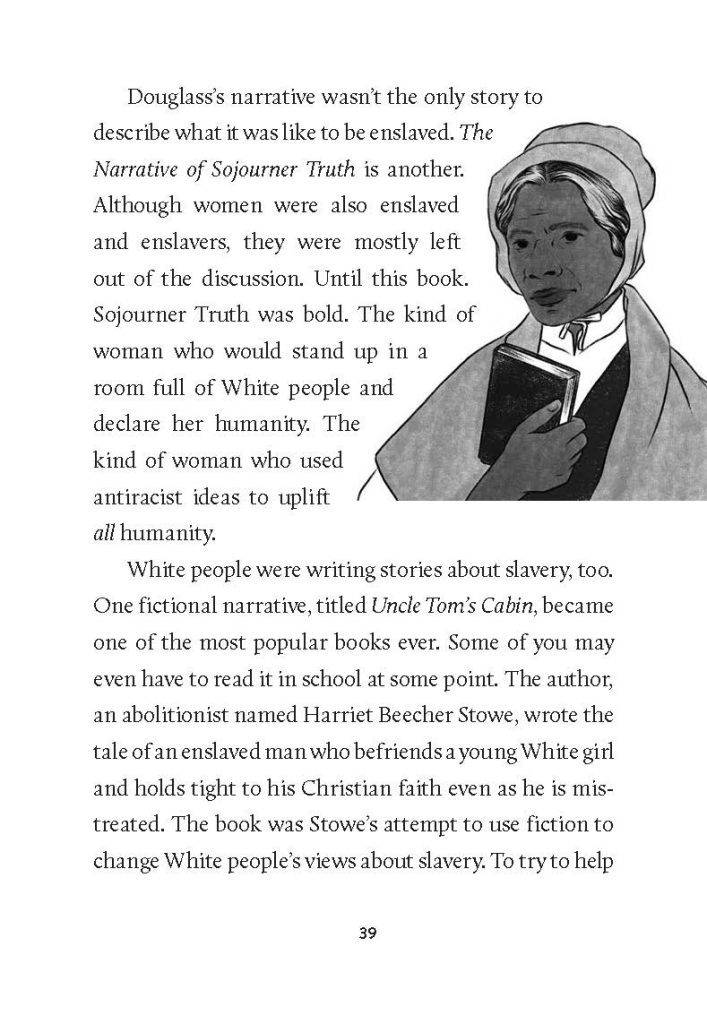 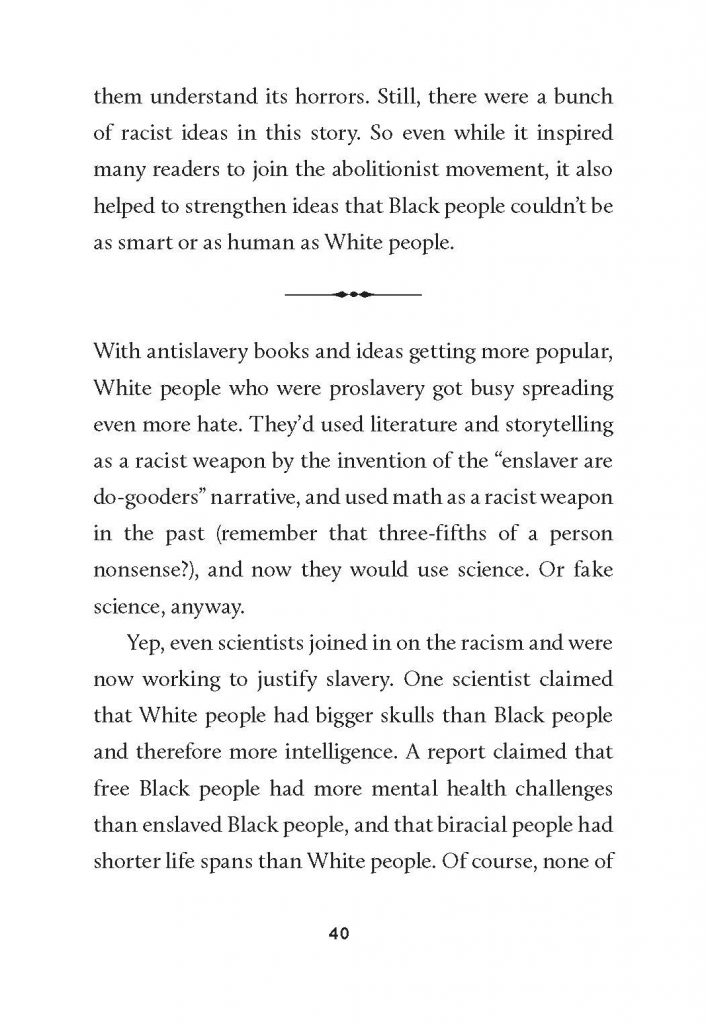 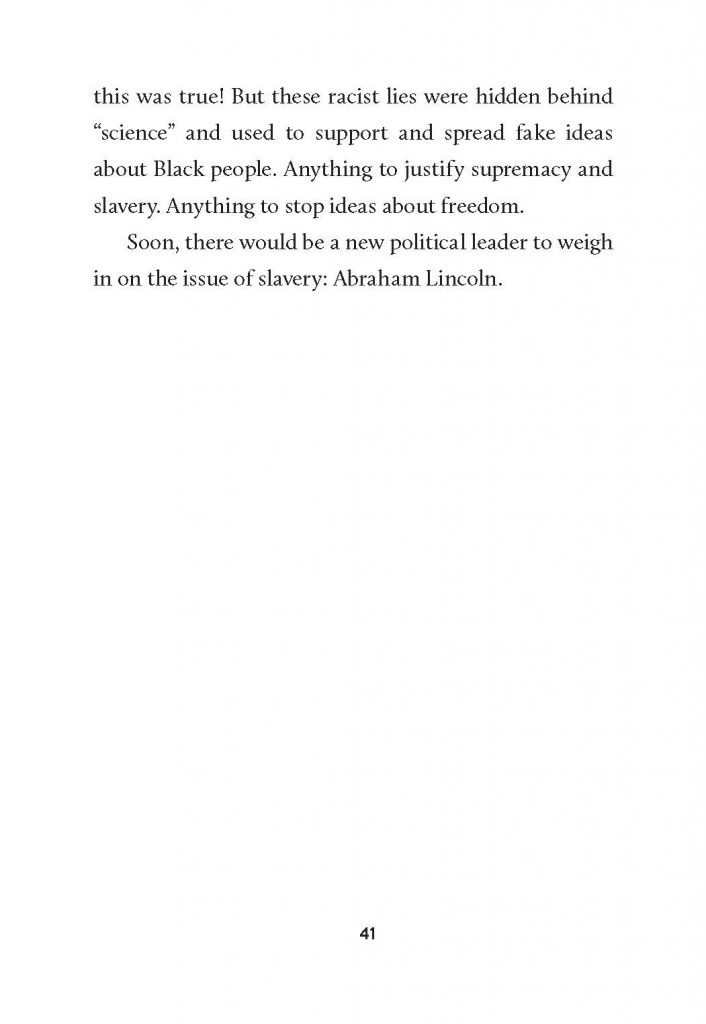 For instance, William Lloyd Garrison. He was a White abolitionist who started a newspaper in 1831. He was inspired by Black abolitionists in Boston, people like Maria Stewart and David Walker. Like them, he believed in the immediate physical freedom of Black people. (Yes!) But his ideas involved Black people proving their equality to White people who, eventually, would accept their existence. (No!) To make it plain, he believed in, “Free today, but equal later on after White people are sure you deserve to be equal, because your being human isn’t enough.”

Black people shouldn’t have to convince White people they are equal! His ideas about freedom for Black people had strings attached—requirements he felt Black people would have to meet. Because, apparently, being people wasn’t enough. In 1835, Garrison shared his ideas about Black people and their freedom. He and others who joined him used the new technology of mass printing and the postal service to flood the nation with twenty to fifty thousand abolitionist pamphlets a week. A million antislavery pamphlets by the end of the year!

In 1845, there was a new narrative. Instead of this one giving thoughts and opinions about slavery, it was a firsthand account of its horrors. This story was written by Frederick Douglass, a Black man who had been enslaved. His book, The Narrative of the Life of Frederick Douglass, an American Slave, was published with Garrison’s help. And it was a hit! An important weapon to fight against the idea that Black people were inferior. But Douglass was a runaway enslaved person whose voice was getting attention, which put him in danger of being caught. Although he had to flee to Great Britain and continue spreading his antislavery message there, his words and message became gold for all those who were working to abolish slavery in America. Douglass’s narrative wasn’t the only story to describe what it was like to be enslaved. The Narrative of Sojourner Truth is another. Although women were also enslaved and enslavers, they were mostly left out of the discussion. Until this book. Sojourner Truth was bold. The kind of woman who would stand up in a room full of White people and declare her humanity. The kind of woman who used antiracist ideas to uplift all humanity.

White people were writing stories about slavery, too. One fictional narrative, titled Uncle Tom’s Cabin, became one of the most popular books ever. Some of you may even have to read it in school at some point. The author, an abolitionist named Harriet Beecher Stowe, wrote the tale of an enslaved man who befriends a young White girl and holds tight to his Christian faith even as he is mistreated. The book was Stowe’s attempt to use fiction to change White people’s views about slavery. To try to help them understand its horrors. Still, there were a bunch of racist ideas in this story. So even while it inspired many readers to join the abolitionist movement, it also helped to strengthen ideas that Black people couldn’t be as smart or as human as White people.

With antislavery books and ideas getting more popular, White people who were proslavery got busy spreading even more hate. They’d used literature and storytelling as a racist weapon by the invention of the “enslaver are do-gooders” narrative, and used math as a racist weapon in the past (remember that three-fifths of a person nonsense?), and now they would use science. Or fake science, anyway.

Yep, even scientists joined in on the racism and were now working to justify slavery. One scientist claimed that White people had bigger skulls than Black people and therefore more intelligence. A report claimed that free Black people had more mental health challenges than enslaved Black people, and that biracial people had shorter life spans than White people. Of course, none of this was true! But these racist lies were hidden behind “science” and used to support and spread fake ideas about Black people. Anything to justify supremacy and slavery. Anything to stop ideas about freedom.

Soon, there would be a new political leader to weigh in on the issue of slavery: Abraham Lincoln.

Jason Reynolds is the #1 New York Times bestselling author of many books, including Stamped: Racism, Antiracism and You (co-authored with Ibram X. Kendi), Long Way Down, Look Both Ways, and All American Boys (cowritten with Brendan Kiely), As Brave as You, and many others. He is a two-time National Book Award finalist; the recipient of a Newbery Honor, a Printz Honor, and multiple Coretta Scott King Honors; and the winner of a Kirkus Prize, two Walter Dean Myers Awards, and an NAACP Image Award, among other honors. He lives in Washington, D.C.

Dr. Ibram X. Kendiis a #1 New York Times bestselling author, the Andrew W. Mellon Professor in the Humanities, and the Founding Director of the Boston University Center for Antiracist Research. He is an Ideas Columnist at The Atlantic, and a correspondent with CBS News. He is the author of many books including Stamped from the Beginning: The Definitive History of Racist Ideas in America, which won the National Book Award for Nonfiction, and three #1 New York Times bestsellers: How to Be an Antiracist; Stamped: Racism, Antiracism, and You, co-authored with Jason Reynolds; and Antiracist Baby, illustrated by Ashley Lukashevsky.

Dr. Sonja Cherry-Paul is an educator, author, and the co-founder of the Institute for Racial Equity in Literacy. She is the Director of Diversity and Equity at the Teachers College Reading and Writing Project at Columbia University. As a former middle school English teacher, Sonja developed curriculum that centered the work of racial literacy in K-12 schools. She leads presentations at educational conferences and works with educators around the world providing professional development on antiracist reading and writing instruction.

Previous Post: « Sarah Dass’s Where the Rhythm Takes You Is a Ya Persuasion Set In Trinidad and Tobago
Next Post: Q&A With Ryan Brockington and Isaac Webster, Daddy & Dada »
WNDB is pleased to announce our 2022 mentees! Thes