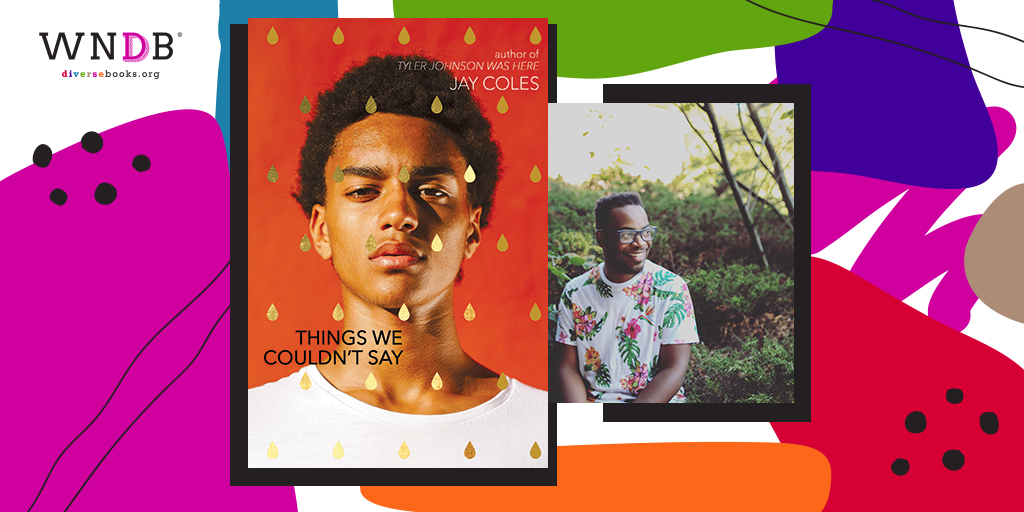 Today we’re pleased to reveal an exclusive excerpt from Things We Couldn’t Say by Jay Coles, which publishes on September 21, 2021.

It’s hard for Gio to know what to do. Can he forgive her like she wants to be forgiven? Or should he tell her she lost her chance to be in his life? Complicating things further, Gio’s started to hang out with David, a new guy on the basketball team. Are they friends? More than friends? At first, Gio’s not sure… especially because he’s not sure what he wants from anyone right now.

There are no easy answers to love — whether it’s family love or friend love or romantic love. In Things We Couldn’t Say, Jay Coles, acclaimed author of Tyler Johnson Was Here, shows us a guy trying to navigate love in all its ambiguity — hoping at the other end he’ll be able to figure out who is and who he should be. 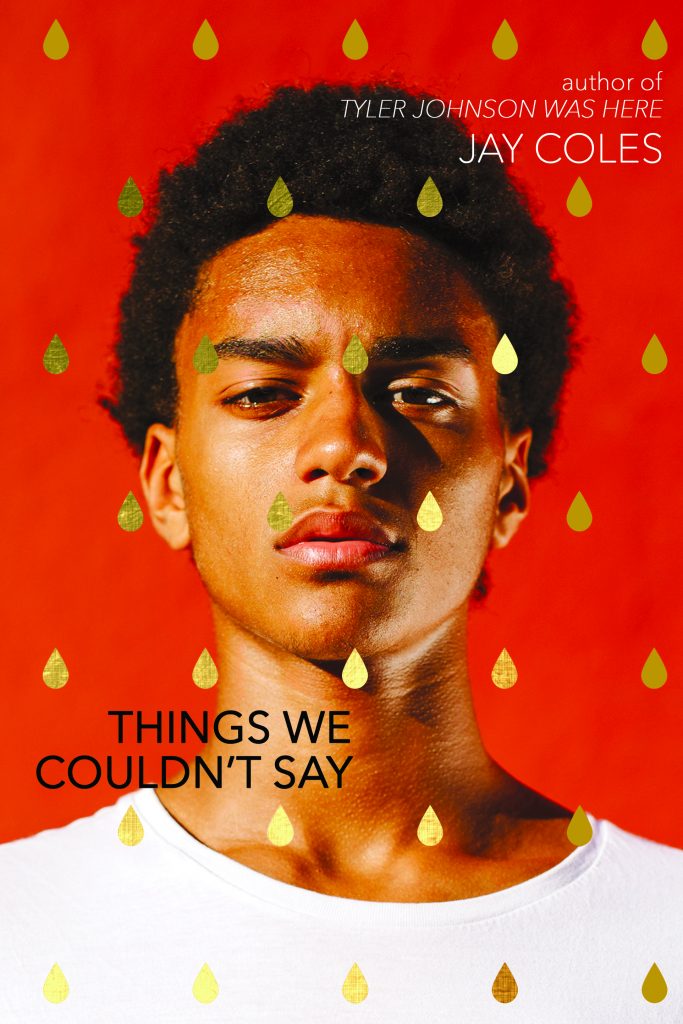 More silence as we both turn our gazes back to the TV. Golden State is crushing the Pacers. It’s not worth watching anymore. I scoot back on the bed a little bit. Not too much, so it isn’t weird.

“So, you make playlists, too, huh? I remember you mentioning that at lunch,” I say.

“I do. Music is life. And I think my playlists are always saving me.”

“Nope. You wanna listen to one of mine right now?”

I pull out my phone, open up Spotify, and click on my playlist titled “Chillax.” It’s one that I go to a lot when I’m just kicking back with Olly and Ayesha and we’re playing Mario Kart or NBA 2K.

I hit shuffle and the first song that plays is “I Got 5 on It” by Luniz. It’s an old-school one that was waaaaay before my time. It’s still a bop all these years later.

David bobs his head up and down. He’s on beat, too, and I’m slightly impressed.

“Fiiiiiiive on it,” he sings, like he’s heard this song somewhere before.

“What you know about this?” I ask him, a grin easing up on my face.

“I saw that Jordan Peele movie,” he says, turning red a little bit more and more. “And my dad, believe it or not, really loves that song. What are those odds, right?”

I nod. “Jordan Peele movies are great. And my Pops used to jam out to this song, before my mom left. He became a totally different person after that. I don’t even think I’ve heard him listen to any music besides the church choir.” I’m seriously wondering about this, and the more I do, the more it feels like such a sad fact.

“My Pops is a pastor in this neighborhood,” I say, probably saying it a little quietly. It’s not something I broadcast to the whole world or would feel comfortable telling an average stranger, but David now lives in the Haven, he’ll find out somehow. Besides, the more I talk to him, the more and more he doesn’t feel like a stranger. “Our—I mean, Pops’ church is on Seventh Street.” I almost say our church, but it’s not ours. It’s his.

“What is it like to be a pastor’s kid?” David asks.

“Weird. Because people ’round here claim to have known you and have changed your diapers and there’s all these expectations for me to live a certain way, and I don’t like it.”

“I get that. I can tell you all about being a carpenter’s son.”

“True story: I thought a carpenter was a person who put carpet in houses till I was like twelve.”

David laughs. “Not quite.”

My phone buzzes and it’s a text from Karina. She’s asking me where I’m at. I text her that I’m only across the street, and she calms down. I shove my phone back in my pocket. “Who’s that?” David asks.

“My stepmom. Wondering where I am.”

David lifts up and turns off his TV. “Thanks for hanging out,” he says.

“No problem. I had fun,” I say . . . which doesn’t feel like enough. Even if there were moments that were awkward or silent or whatever, it was just so nice to be able to open up to him and to not really become this anxious mess, thinking about my birth mom, crying about it, and beating myself up. It’s nice that he can relate to the weight of the grief I feel somewhat. That’s something that I don’t know I can say about Ayesha or Olly. I love them both, but I know they haven’t experienced anything like that. And that’s okay. I just think sometimes it’s just nice when someone can just . . . know and understand. Like David can.

He says, “I can walk you down,” then takes me through the dark hallway and down the creaky stairs and to the front door. He even opens it for me, and I walk out, noticing that it’s raining again. He cuts on the porch light, so the raindrops splashing against his house meet the light and look more like golden coins raining from the sky.

“We should hang out again,” he says shyly, again running a hand through his hair. I’ve noticed that he does that a lot. He’s got great hair, so I don’t entirely blame him. 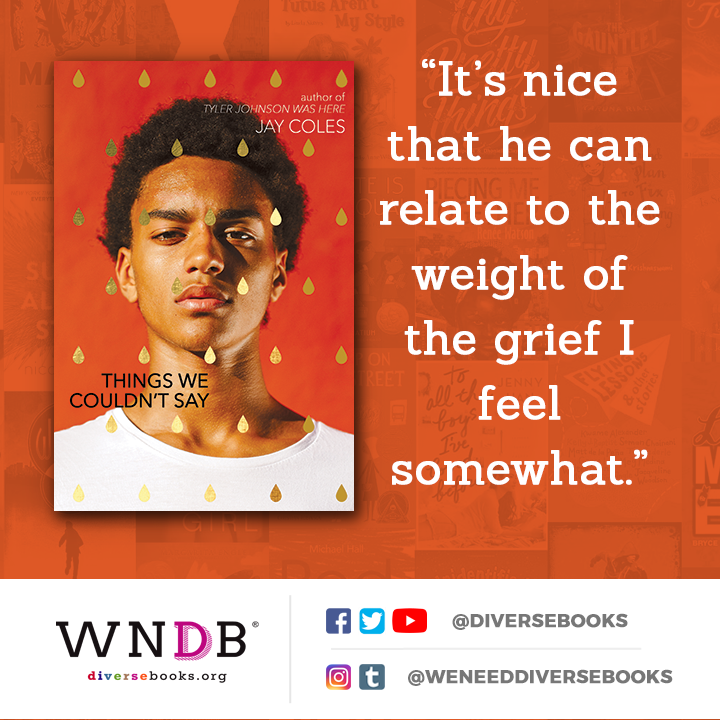 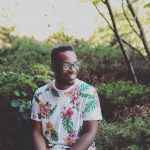 Jay Coles is a graduate of Vincennes University and Ball State University. When he’s not writing diverse books, he’s advocating for them, teaching middle school students, and composing for various music publishers. His debut novel Tyler Johnson Was Here is based on true events in his life and inspired by police brutality in America. His new novel Things We Couldn’t Say goes on sale September 21, 2021 from Scholastic Press. He resides in Indianapolis, Indiana, and invites you to visit his website at jaycoleswrites.com.