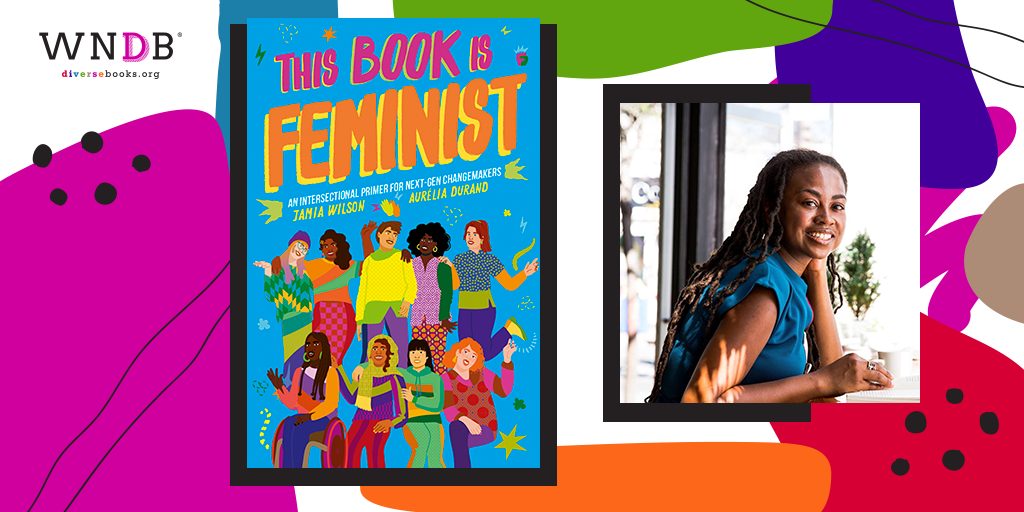 Today we’re pleased to reveal an exclusive excerpt from This Book Is Feminist by Jamia Wilson, Illustrated by Aurelia Durand, which publishes on August 3, 2021.

A vibrantly illustrated introduction to intersectional feminism for next-generation changemakers.

Who has power? Who creates the rules? How do identities intersect?

In this next book in the Empower the Future ​series, explore the points where gender, race, class, ability, sexuality, and culture meet. Learn from author Jamia Wilson’s lived experience, read the statistics, and gain strength in quotes from feminist firebrands and activists. Along the way, respond to calls to action and form your own views on the ‘F’ word.

This book is for everyone.

Discover the history and meaning of the feminist movement through 15 reasons why feminism improves life for everyone. By exploring who has been left out of the movement historically, this book makes sure everybody is included.

“I am a feminist. I’ve been female for a long time now. It’d be stupid not to be on my own side.” —Maya Angelou

What have you been taught about who has power and who makes the rules? Have you ever been lost for words at an old-school family friend’s ‘kind’ but sexist comments? Do you agree with equality and strive for justice, but struggle to take on the name ‘Feminist’? Then read on.

In this new feminist classic, the focus is intersectional from the beginning, not just as an add-on. Using the framework of ‘personal is political,’ Jamia Wilson—former director of the Feminist Press—analyzes her own experiences, before expanding outwards and drawing on stats, quotes, and luminaries to gain strength from.

You will close the book with an understanding that history and culture play a role in shaping systems of power and of what we can do with our strengths, community, and values to help change course when needed. You won’t have read a feminist tome like this before. 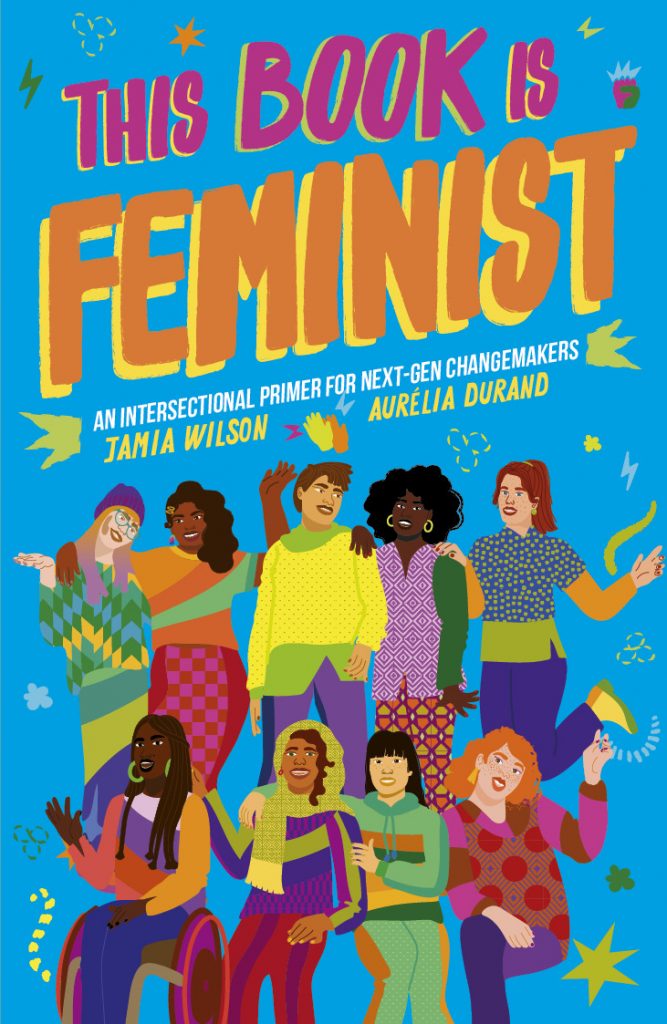 This excerpt is from Chapter 1 and there is a transcript below. 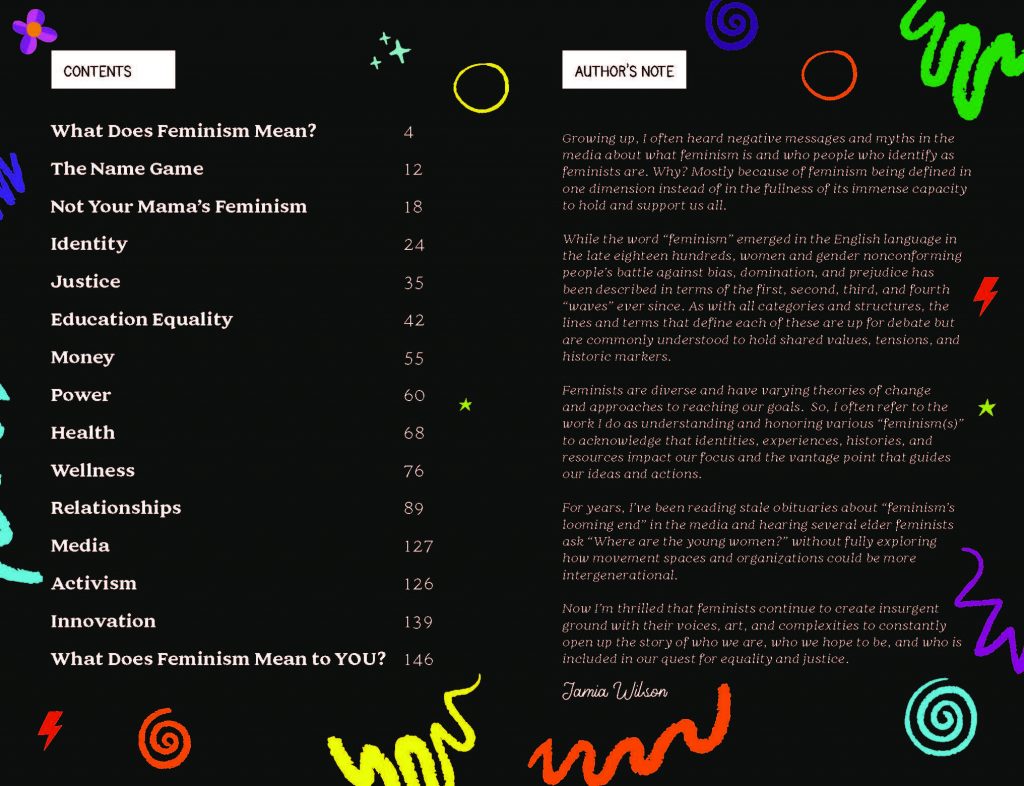 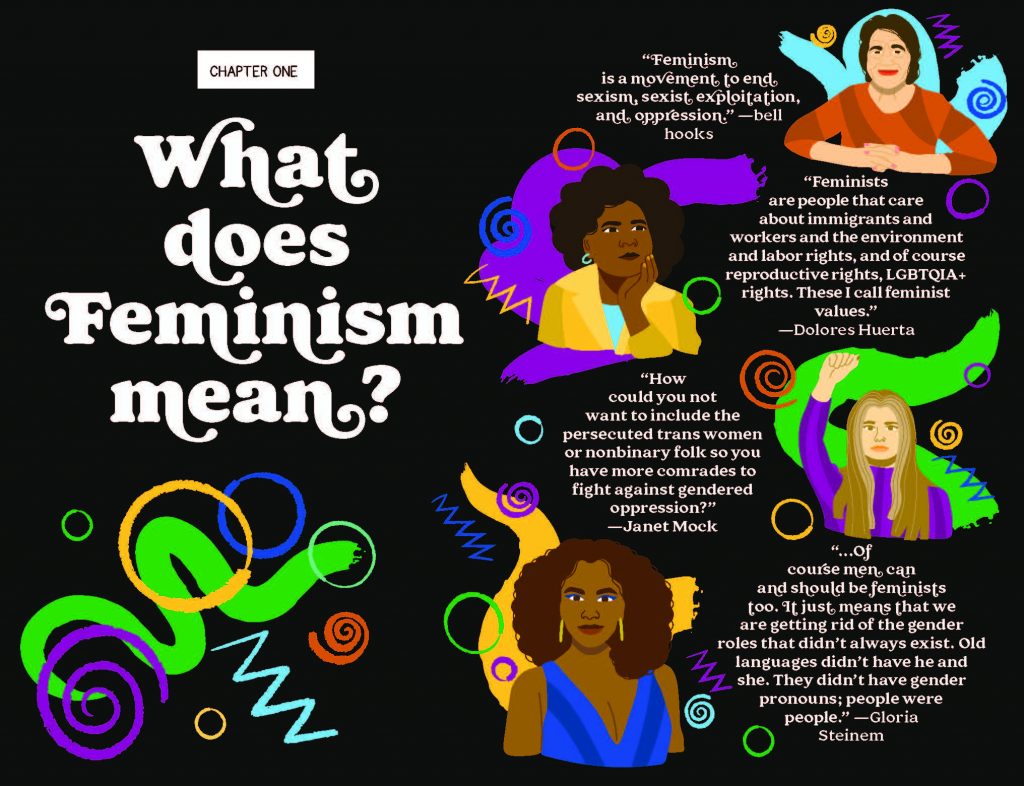 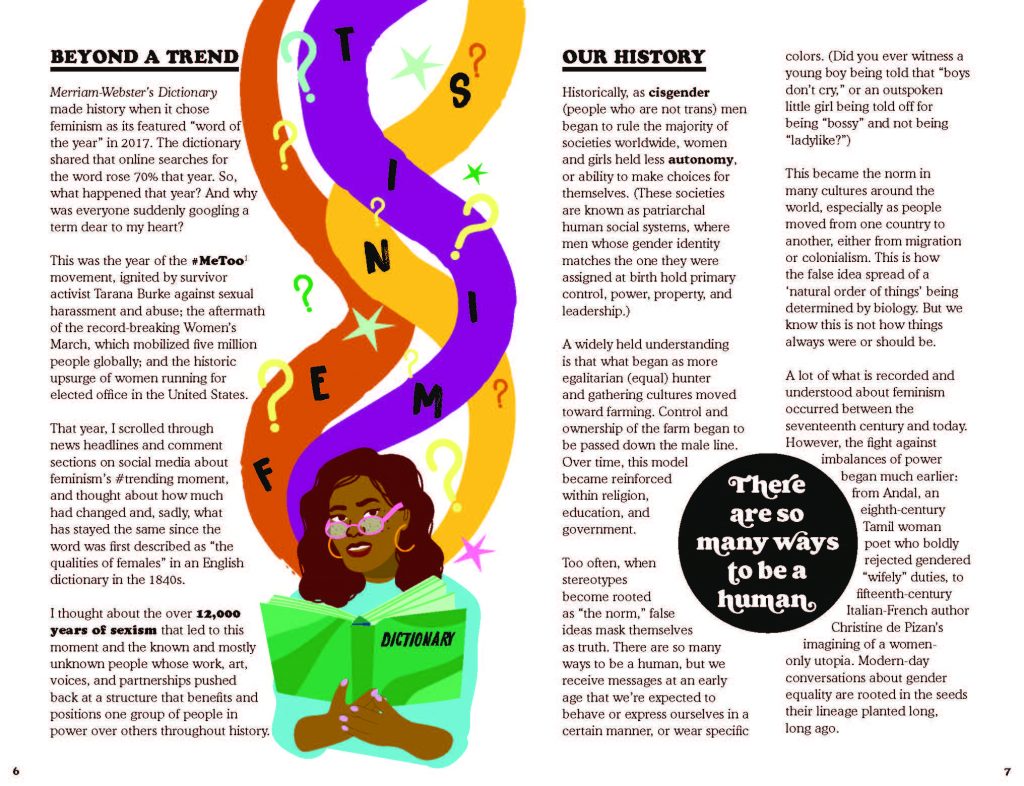 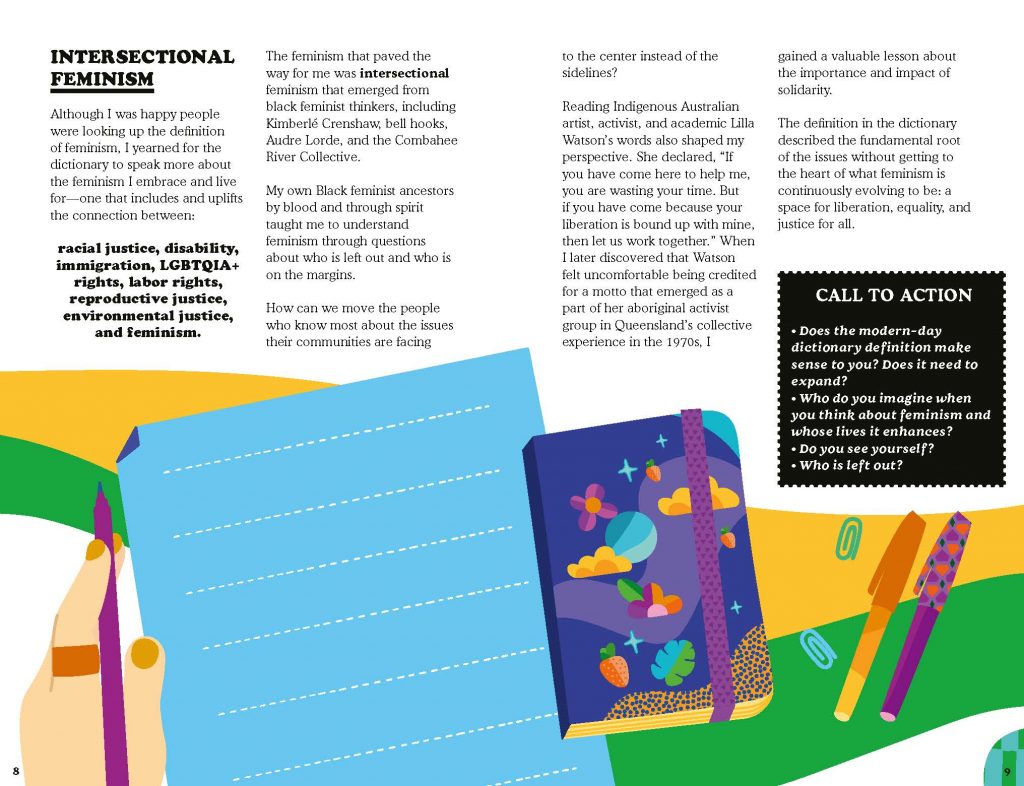 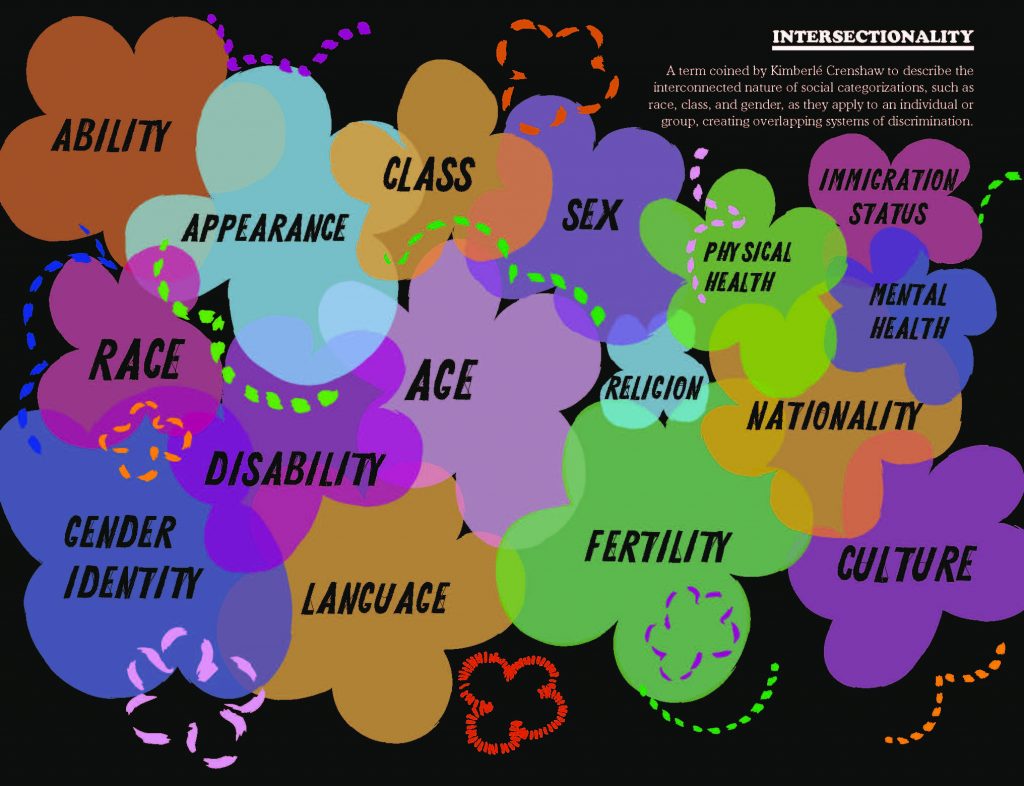 What Does Feminism Mean? 4

Not Your Mama’s Feminism 18

What Does Feminism Mean to YOU? 146

Growing up, I often heard negative messages and myths in the media about what feminism is and who people who identify as feminists are. Why? Mostly because of feminism being defined in one dimension instead of in the fullness of its immense capacity to hold and support us all. While the word “feminism” emerged in the English language in the late eighteen hundreds, women and gender-nonconforming people’s battle against bias, domination, and prejudice has been described in terms of the first, second, third, and fourth “waves” ever since. As with all categories and structures, the lines and terms that define each of these are up for debate but are commonly understood to hold shared values, tensions, and historic markers. Feminists are diverse and have varying theories of change and approaches to reaching our goals. So, I often refer to the work I do as understanding and honoring various “feminism(s)” to acknowledge that identities, experiences, histories, and resources impact our focus and the vantage point that guides our ideas and actions. For years, I’ve been reading stale obituaries about “feminism’s looming end” in the media and hearing several elder feminists ask “Where are the young women?” without fully exploring how movement spaces and organizations could be more intergenerational. Now I’m thrilled that feminists continue to create insurgent ground with their voices, art, and complexities to constantly open up the story of who we are, who we hope to be, and who is included in our quest for equality and justice. —Jamia Wilson

What Does Feminism Mean?

“Feminism is a movement to end sexism, sexist exploitation, and oppression.” —bell Hooks

“Feminists are people that care about immigrants and workers and the environment and labor rights, and of course reproductive rights, LGBTQIA+ rights. These I call feminist values.” —Dolores Huerta

“How could you not want to include the persecuted trans women or nonbinary folk so you have more comrades to fight against gendered oppression?” —Janet Mock

“…Of course men can and should be feminists too. It just means that we are getting rid of the gender roles that didn’t always exist. Old languages didn’t have he and she. They didn’t have gender pronouns; people were people.” —Gloria Steinem

Merriam-Webster’s Dictionary made history when it chose feminism as its featured “word of the year” in 2017. The dictionary shared that online searches for the word rose 70% that year. So, what happened that year? And why was everyone suddenly googling a term dear to my heart? This was the year of the #MeToo1 movement, ignited by survivor activist Tarana Burke against sexual harassment and abuse; the aftermath of the record-breaking Women’s March, which mobilized five million people globally; and the historic upsurge of women running for elected office in the United States. That year, I scrolled through news headlines and comment sections on social media about feminism’s #trending moment, and thought about how much had changed and, sadly, what has stayed the same since the word was first described as “the qualities of females” in an English dictionary in the 1840s. I thought about the over 12,000 years of sexism that led to this moment and the known and mostly unknown people whose work, art, voices, and partnerships pushed back at a structure that benefits and positions one group of people in power over others throughout history.

Historically, as cisgender (people who are not trans) men began to rule the majority of societies worldwide, women and girls held less autonomy, or ability to make choices for themselves. (These societies are known as patriarchal human social systems, where men whose gender identity matches the one they were assigned at birth hold primary control, power, property, and leadership.)A widely held understanding is that what began as more egalitarian (equal) hunter and gathering cultures moved toward farming. Control and ownership of the farm began to be passed down the male line. Over time, this model became reinforced within religion, education, and government. Too often, when stereotypes become rooted as “the norm,” false ideas mask themselves as truth. There are so many ways to be a human, but we receive messages at an early age that we’re expected to behave or express ourselves in a certain manner, or wear specific colors. (Did you ever witness a young boy being told that “boys don’t cry,” or an outspoken little girl being told off for being “bossy” and not being “ladylike?”) This became the norm in many cultures around the world, especially as people moved from one country to another, either from migration or colonialism. This is how the false idea spread of a ‘natural order of things’ being determined by biology. But we know this is not how things always were or should be. A lot of what is recorded and understood about feminism occurred between the seventeenth century and today. However, the fi ght against imbalances of power began much earlier: from Andal, an eighth-century Tamil woman poet who boldly rejected gendered “wifely” duties, to fifteenth-century Italian-French author Christine de Pizan’s imagining of a women only utopia. Modern-day conversations about gender equality are rooted in the seeds their lineage planted long, long ago.

Although I was happy people were looking up the definition of feminism, I yearned for the dictionary to speak more about the feminism I embrace and live for—one that includes and uplifts the connection between: racial justice, disability, immigration, LGBTQIA+ rights, labor rights, reproductive justice, environmental justice, and feminism. The feminism that paved the way for me was intersectional feminism that emerged from black feminist thinkers, including Kimberlé Crenshaw, bell hooks, Audre Lorde, and the Combahee River Collective. My own Black feminist ancestors by blood and through spirit taught me to understand feminism through questions about who is left out and who is on the margins. How can we move the people who know most about the issues their communities are facing to the center instead of the sidelines? Reading Indigenous Australian artist, activist, and academic Lilla Watson’s words also shaped my perspective. She declared, “If you have come here to help me, you are wasting your time. But if you have come because your liberation is bound up with mine, then let us work together.” When I later discovered that Watson felt uncomfortable being credited for a motto that emerged as a part of her aboriginal activist group in Queensland’s collective experience in the 1970s, I gained a valuable lesson about the importance and impact of solidarity. The definition in the dictionary described the fundamental root of the issues without getting to the heart of what feminism is continuously evolving to be: a space for liberation, equality, and justice for all.

To term coined by Kimberlé Crenshaw to describe the interconnected nature of social categorizations, such as race, class, and gender, as they apply to an individual or group, creating overlapping systems of discrimination. 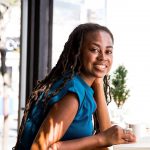 Jamia Wilson is a feminist activist, writer, and speaker. She joined Random House as vice president and executive editor in 2021. As the former director of the Feminist Press at the City University of New York and the former VP of programs at the Women’s Media Center, Jamia has been a leading voice on women’s rights issues for over a decade. Wilson is the author of Young, Gifted, and Black, the introduction and oral history in Together We Rise: Behind the Scenes at the Protest Heard Around the World, Step Into Your Power: 23 Lessons on How to Live Your Best Life, Big Ideas for Young Thinkers, ABC’s of AOC, and the co-author of Roadmap for Revolutionaries: Resistance, Advocacy, and Activism for All. 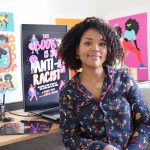 Aurélia Durand is a French graphic artist. Her work, which includes the illustrations for the #1 New York Times bestseller This Book Is Anti-Racist, is a vivid celebration of diversity; she dedicates her artistic voice to matters involving representation. Aurélia represents Afro-descendants as joyful, proud, and empowered — a united community whose destinies are intertwined. These colorful personalities present the unified voice of a global community whose hopes, dreams, and desires envision an inclusive future for all. Her work has been featured in advertising campaigns, galleries, and editorial magazines; her clients include Nike, The New Yorker, Facebook, and more. Find her on Instagram: @4ur3lia.

Previous Post: « Cover Reveal for Today is Different by Doua Moua, Illustrated by Kim Holt
Next Post: Read an Excerpt From Mighty Inside by Sundee T. Frazier »
Native writers: applications for the 2023 Native C