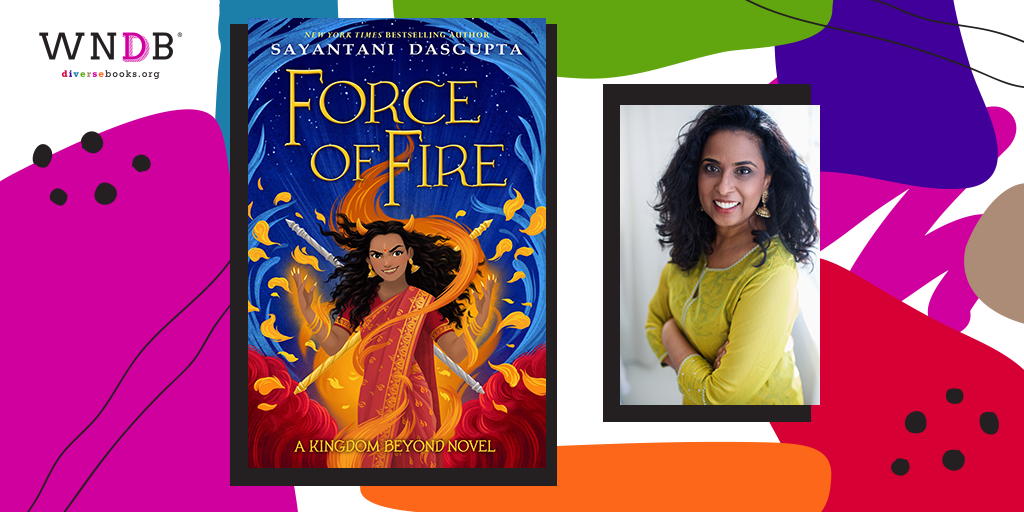 Force of Fire by Sayantani DasGupta is on sale on June 1, 2021. Order it here.

At what cost do we forget the stories of our radical elders? What price must we pay for these erased histories?

The other day, I was participating in an Asian American writer’s panel specifically focusing on children’s literature and social justice. We spoke, of course, of the rise of anti-Asian hate crimes in the US during the COVID-19 pandemic; how a revered colleague of two of us on the panel had only recently been assaulted near our well respected ‘liberal’ college campus. We spoke of historical alliances and active allyship between Asian American and African American communities, the importance of recognizing the legacy of civil rights activism, and how it has impacted Asian Americans. We spoke of bystander intervention training. We spoke of our own fear and sadness.

Later, the conversation shifted to older vs. younger Asian Americans and the question of whether Asian immigrants were more likely to be politically conservative than their children. At this point, I couldn’t help but feel flames of anger roiling up within me. Not at the people in the room who had asked the question, but at the fact that we, collectively, were still buying into the stereotype of Asian American immigrants as apolitical, conservative, model minorities; the stereotype that it’s only the younger generation that participates in anti-racist and other forms of activism.

I was brought up in an activist household by activist immigrant parents. My mother, one of the founders of Manavi, the first South Asian American feminist antiviolence group in this country, is still a firebrand of a scholar, writer, and organizer. When I was young, our family life often consisted of me stuffing envelopes for various mailing drives, making samosas for community fundraisers, and going to marches and rallies. One of my earliest memories, in fact, is walking hand in hand with my mother at a Take Back the Night March, in awe of the hundreds of women marching around us, their voices raised in songs, candles, and fists raised in the air.

The assumption is, of course, that my family is an exception to the rule. But that too is a part of the model minority myth, a myth that seeks not only to disempower our varied Asian American communities and make them seem blandly homogenous but drive a wedge between Asian American and other BIPOC communities in this country striving for anti-racist justice.

This erasure of our Asian American activist histories couldn’t be further from the truth. Consider the legacy of activists like Yuri Kochiyama and Grace Lee Boggs. Remember the connections made between The Black Panther Party, The Young Lords, and Asian American activist groups like The Red Guard Party or I Wor Kuen (IWK).  Importantly, all of these radical groups of the 1960s recognized the connection between racism within the US and global imperialism/warmongering. The Black Panthers had members read the works of international liberatory thinkers like Frantz Fanon and Che Guevara. In the words of a former IWK leader, “We believed US imperialism was a criminal system that conducted a genocidal war in Vietnam and maintained an oppressive racial caste system at home. We believed it was irredeemable and the ‘system’ had to be overthrown.” Taking a page out of this radical history, young Asian American activists can look not only to earlier generations of activists in this country but the long history of progressive revolutionaries in our countries of origin.

I grew up on the stories of my revolutionary ancestors in India. When I visited my Thamma (paternal grandmother) in Santiniketan, West Bengal, I would meet her cadre of frail appearing, white-sari-clad elderly friends. These grandmothers broke any stereotypes I had of older women. This one pushing me to eat more was a black belt in jiu-jitsu. That one gossiping about her granddaughter’s wedding had earned her pilot’s license during the time of the British occupation of India. A third benign-looking, now wizened lady had spent years in a British prison for being a radical revolutionary leader.

My father’s Nina Pishi, his aunt Banalata DasGupta, was also apparently a firebrand. In the 1930s, she drove cars, was learning how to fly airplanes, and was a freedom fighter arrested by the British for hiding guns for revolutionary comrades. When she died, at age 21, it was due to a preventable and untreated illness she contracted in a British prison.

My maternal grandfather, Sunil Kumar Das, was himself a freedom fighter who had gone to British prison at age 15 for participating in the 1930 Chittagong Armory Raid. This temporarily successful armed uprising was led by teacher-turned-revolutionary leader Surya Sen or Master-da (‘Teacher-Brother’) as my Tata called him. My grandfather spent seven harsh years in a British prison, and neither I nor my mother knows all that he endured. I do remember him telling me about the terrible beatings they gave him, and I do know he had lifelong health problems due to contracting Beriberi and other diseases in prison, for which he received little to no treatment. When he died in his 90’s, Tata was one of the few still living freedom fighters recognized by the Indian government for his service to the nation. He instilled in me a fierce, fiery opposition to any and all injustice, and a duty to fight for freedom in all its forms. 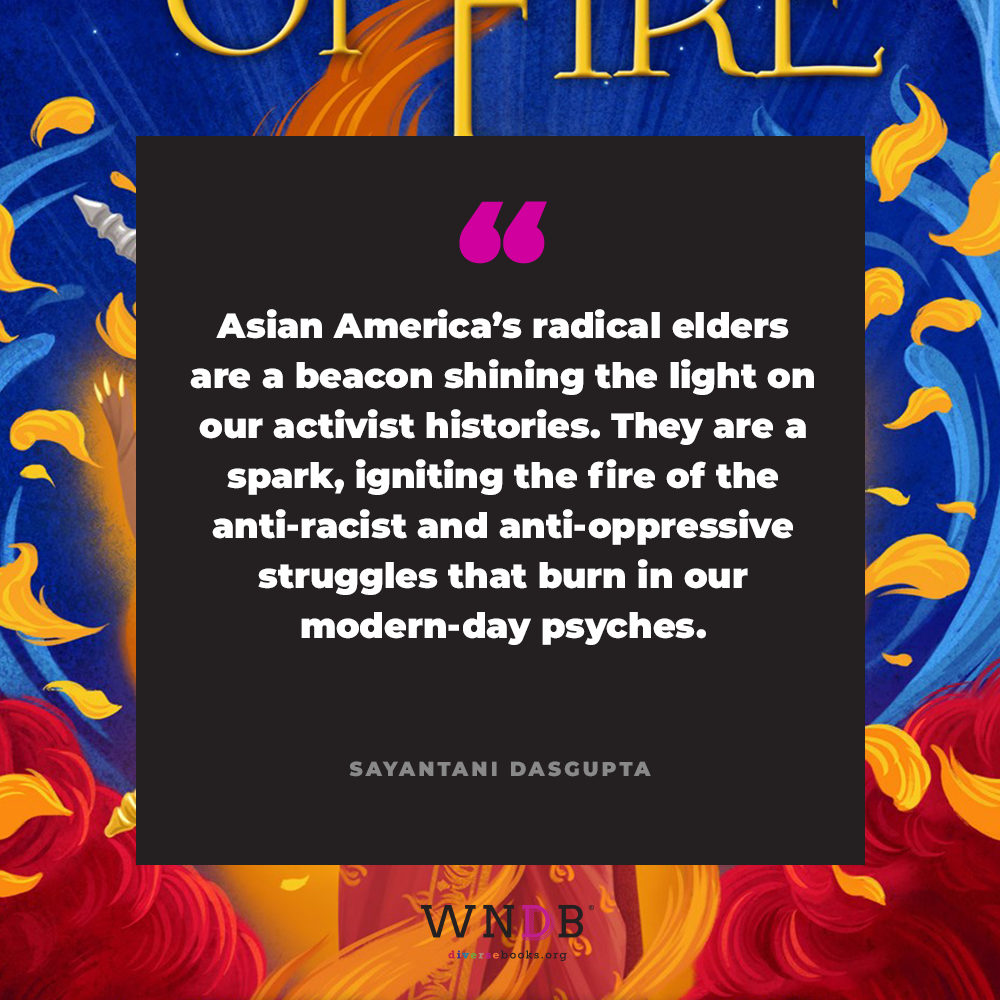 My middle-grade fantasy novel, Force of Fire, was inspired by these anticolonialist stories in my own family, and many others. Pinki, the novel’s fire-rakkhoshi heroine, is, like me, the descendant of revolutionaries struggling with how best to live up to this heritage. Initially, Pinki wants nothing to do with revolutions or do-goodery, rather, she just wants to learn how to tame her seemingly out-of-control fire power. When, however, the son of her country’s Serpentine Governor General offers her a secret deal to do just that, she finds herself becoming a reluctant leader of her country’s freedom struggles against the Empire of Serpent Overlords.

Pinki’s story is about a young woman finding and celebrating her voice, strength, and fire, rather than being afraid of it. It is about collective action, and being willing to be the spark that lights the fires of revolution. At the end of the story, Pinki and her friends rescue caged human and rakkhosh children who have been imprisoned in a serpentine ‘retraining school’—their voices magically cut out of their bodies by the snakes, who would have their subjects forget their own language, culture, and heritage.

This language-oriented freedom struggle is inspired by not only my family’s anticolonialist history but also the struggles of other communities, including those of Indigenous communities in North America who struggle to preserve their language after the violent histories of Native boarding schools, where, up to only a few decades ago, Indigenous children were taken from their families and communities, forced to speak English and forget their own language and culture. It is inspired by bhasha andolon (language revolution) in Bangladesh, and the language martyrs of that country who fought to maintain Bangla/Bengali as their national language. It is even inspired by my own immigrant parents’ dedication to teach me Bengali even as my elementary school teachers instructed them to speak only English to me (an order they did not, thankfully, follow). As a human friend of Pinki’s says in Force of Fire, “Our mother language is the source of our strength. Destroying a people’s language, not letting children learn the ways of those who came before them, is the surest way to kill a culture.” So too, perhaps, is letting young people forget the strength and struggles of those who came before them.

Bengali Nobel Laureate Rabindranath Tagore wrote many poems and songs infused with the passion of India’s freedom struggle. Ekla Cholo Re, a song which was apparently also one of Mahatma Gandhi’s favorites, is a song I have Pinki return to again and again throughout Force of Fire. One line I have loosely translated from the song is as applicable to Pinki as it is to Asian America in general—as we seek not to tame, but to embrace the fires of our revolutionary histories: When there is no light, when the path before you rages with dark, then light your own heart on fire. Be the beacon, be the spark.

Asian America’s radical elders are a beacon shining the light on our activist histories. They are a spark, igniting the fire of the anti-racist and anti-oppressive struggles that burn in our modern-day psyches. To silence the revolutionary voices who came before us—whether in the US or our countries of origin—is to disconnect ourselves from our legacies of radicalism. Let us not forget those whose struggles laid the path below our feet, for they remind us of where we come from, and from what power our communities have been born. In celebrating the force of our radical elders, we ignite the fire that burns in our fiercely beating hearts.

Sayantani DasGupta is the New York Times bestselling author of the critically acclaimed, Bengali folktale and string theory-inspired Kiranmala and the Kingdom Beyond books, the first of which — The Serpent’s Secret — was a Bank Street Best Book of the Year, a Booklist Best Middle Grade Novel of the 21st Century, and an E. B. White Read Aloud Honor Book. Sayantani is a pediatrician by training, but now teaches at Columbia University. When she’s not writing or reading, Sayantani spends time watching cooking shows with her trilingual children and protecting her black Labrador retriever Khushi from the many things that scare him, including plastic bags. She is a team member of We Need Diverse Books, and can be found online at sayantanidasgupta.com and on Twitter at @sayantani16.

Previous Post: « An Emotion of Great Delight by Tahereh Mafi Is About Containing Multitudes
Next Post: Q&A With Mason Deaver, The Ghosts We Keep »
LAST CALL for WNDB 2023 Internship Grant Partners!