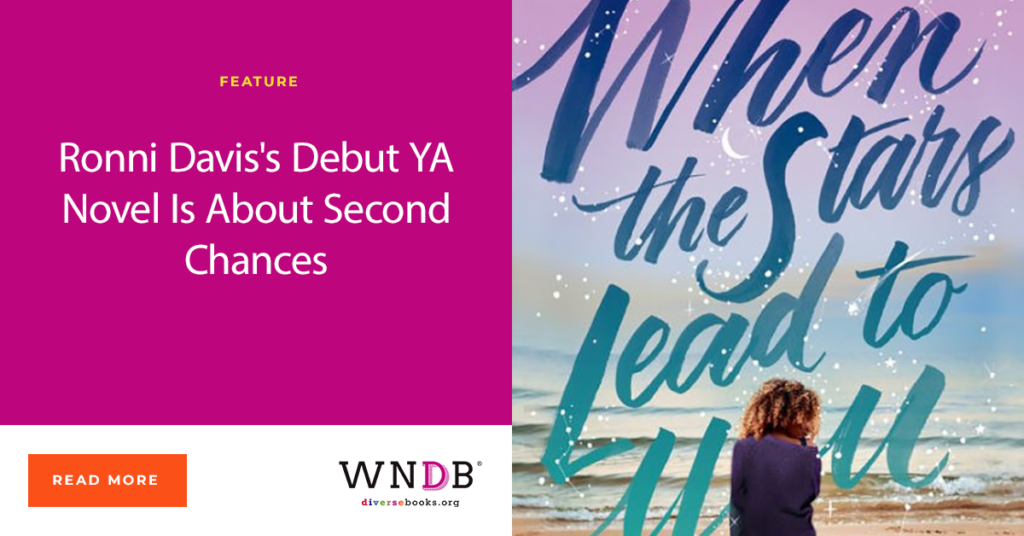 Ronni Davis writes because she is a storyteller, and because other people and their stories fascinate her.

“I am deeply interested in people’s stories and their lives,” she said. One of her top places to people-watch is at Disney World, (“one of my favorite places in the world”), where she loves to observe those around her and wonder what their lives are like outside the park. “Your lives intersect for that little bit,” she said, explaining why she’s so intrigued.

As for why she writes, “I’ve always written,” Davis said. “I communicate better writing, I feel like I have a chance to make it exactly as I need.”

Davis’s debut YA novel, When the Stars Lead to You, (Nov. 12), is a love story between a girl and a boy who had their chance, lost it, and maybe get a second chance. Her favorite things about the book include Devon, the main character, and her parents.

“She has parents who are all up in her business, but still let her make her own choices,” Davis said. “They’re there when she needs them. They’re there to take care of her even when she doesn’t think she needs to be taken care of.”

Something that was important to Davis was to represent mental illness in this book and to do it well. Devon’s love interest, Ashton, has a mental illness. He’s also from a very wealthy family and, by all appearances, has it all together. Davis said he’s the type of guy with just enough of an air of mystery that everyone is a little bit obsessed with him.

“But on the inside, he’s falling apart,” she added. “And I wanted it to be him because I feel like we see the image of the white male in society as all-powerful people.

“I wanted people to not feel so alone,” she added. “I wanted people to feel like maybe this is a thing and to show that nothing’s wrong with you, you just have this thing that you’re dealing with and it could happen to anybody, and it’s okay, you’re okay.”

Davis explained that she lives with a mental illness herself and that as a young person, she didn’t have many resources for finding help…or even, really, the knowledge that such resources existed.

“If I didn’t know what I was looking for, how was I gonna find it?” she asked.

She also wanted to portray mental illness sensitively, knowing how often in media, especially visual media, it’s played to over-exaggeration or for laughs.

Another aspect of the book involving character identities that was important to Davis was that Devon is biracial. Davis said this is not an #ownvoices portrayal of being biracial, as she is a light-skinned Black woman but not biracial.

Davis said, “I move through the world looking that way. I see how people treat me as opposed to someone with brown skin.”

Due to her lighter skin, Davis acknowledges the privilege that darker-skinned Black people do not have; she recalled as a child going shopping with her father and observing how people treated the two of them differently because of their skin tones.

“People seem to let me get away with more, let things slip, because they don’t know that I’m fully Black,” she said.

So Davis said this story, and future ones she hopes to write, will not be from the perspective of “brown-skinned girls, because I don’t know that experience.

“I don’t think it’s my place,” she added. “The people who live that should tell those stories; I don’t think I should take that spot. They experience things that I don’t. I don’t want to perpetuate that cycle.”

Even though she isn’t biracial, Davis said she experiences many things similar to what biracial people do, including questioning where she fits.

“I’ve had the experience where I’m not Black enough, and white spaces are white spaces,” she said. “This is what a lot of biracial people feel. Devon touches on that in the book.”

Davis admitted that she doesn’t necessarily consider her book “fluffy,” but it is a love story about a Black teenager not centered on Black pain, something she feels very strongly about.

She acknowledged that those books are important, but the wealth of Black pain-centered books contrasted with books about Black joy is astonishing.

“What about the Black girls and the biracial girls who want a love story or a girl in the suburbs or maybe a girl who rides horses?” she asked. “I’m done with people consuming our pain, finding it entertaining. I want people to see us in other ways because we are multi-faceted, we are legion. There’s more to us.”