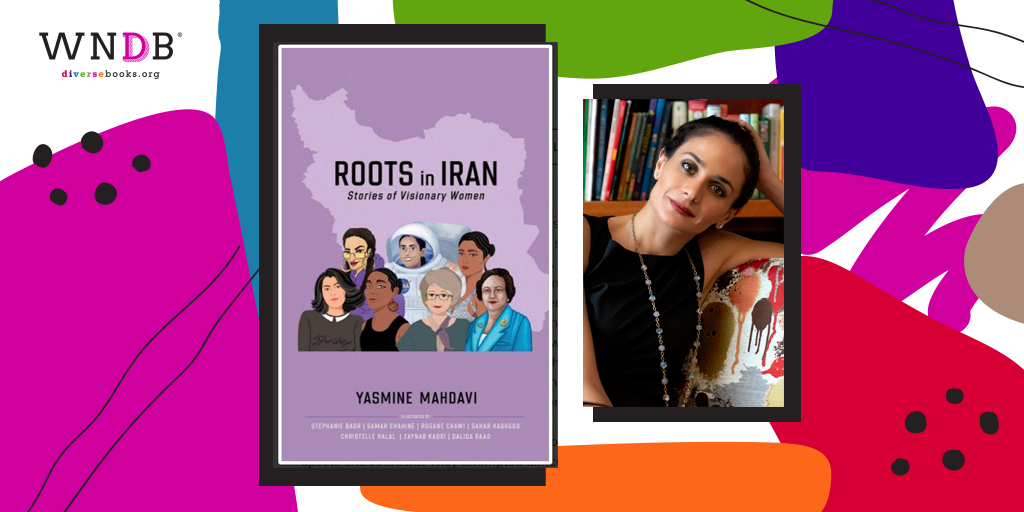 Roots in Iran: Stories of Visionary Women is out now.

Roots in Iran: Stories of Visionary Women is a collection of stories about fifteen remarkable women with roots in Iran. Divided in two sections, the longer chapters provide an in-depth look into the lives of five trailblazers. Readers learn how Anousheh Ansari’s fascination with the galaxies led to her triumphs and travails as an entrepreneur and how Jasmin Moghbeli-riveted by the achievements of Valentina Tereshkova-became a Marine helicopter pilot and eventually a U.S. astronaut. The shorter chapters introduce readers to ten more dynamic women…  Each story is complemented by brilliant, full-color portraits created by female artists with roots in the Middle East. 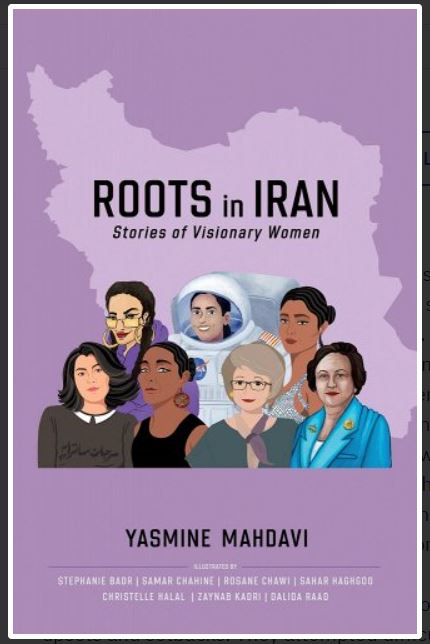 Roots in Iran is an outcome of that truth-seeking, as Yasmine followed her desire to deeply know the fierce women whose shoulders she, her daughter, and Nawal stand upon.

She became curious about all the women whose histories merged with hers as a fellow immigrant from Iran, as her family moved from Tehran to California when she was a young girl. That led her to research beginning back in 2017 that resulted in the slim text that compiles the stories of fifteen visionary women who are tied to the Middle Eastern country—from Anousheh Ansari, who traveled to the International Space Station, to Anna Eskamani, the first American with roots in Iran to be elected as a Florida legislator.

There are snapshots on more widely-recognized names like Golshifteh Farhani (an actor), Shirin Neshat (a photographer), and Marjane Satrapi (a writer). And it includes factual sidebars about Persian holidays like Nowruz, the March new year aligned with the Spring equinox, and blurbs on the Islamic law of mandatory hijab-wearing in the country. 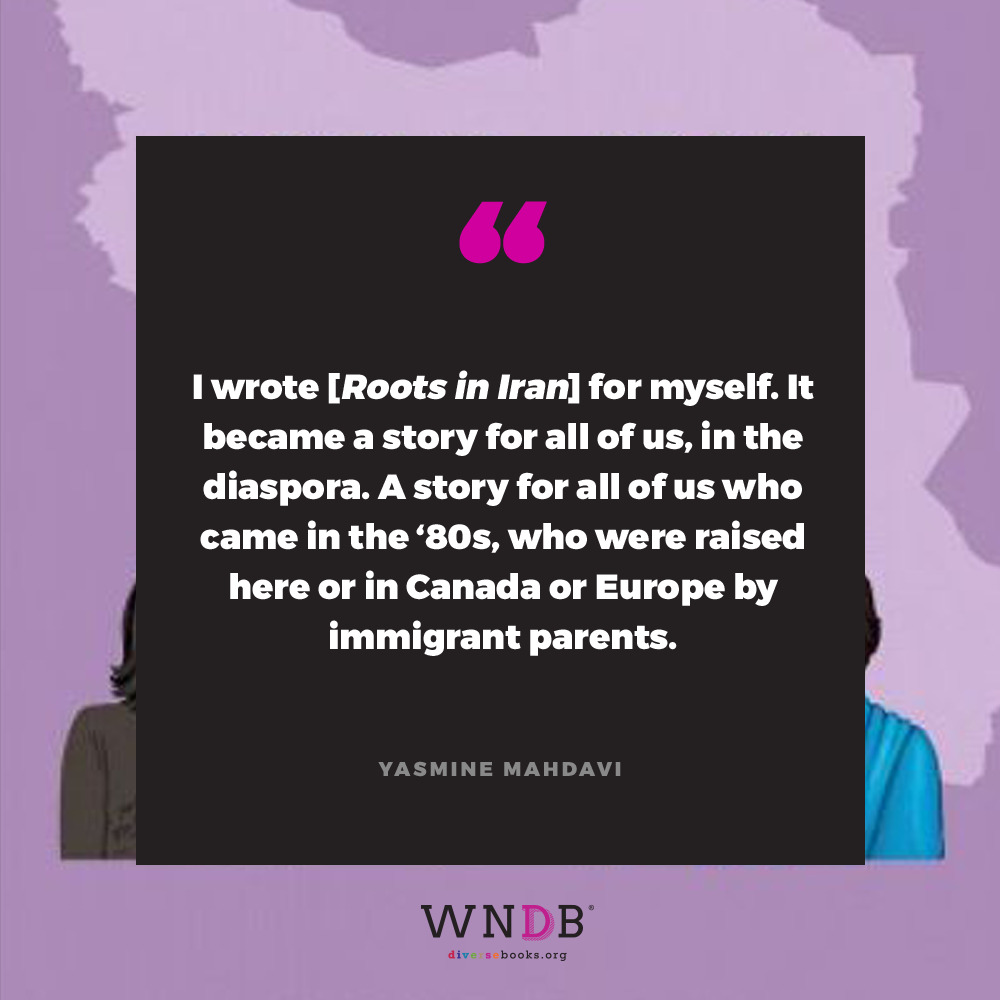 Part of the work this book does is to deconstruct unflattering narratives of a country so often demonized. “Because there’s so much misconception about that part of the world,” Yasmine said. “I hope it dismantles a little of what you come with.”

There was a clear thread too between all the featured women, who overcame consistent obstacles both large and small. And in those obstacles, there’s a broad appreciation for the humanity of all people who stand up to be and bring their whole selves to life.

Mahdavi’s writing asks for readers to be empathetic and compassionate. It reminds readers to be curious about the world, and elevates an understanding of “cognitive dissonance,” as she said—to live in the grey area of nuance that acknowledges that no group or person is all bad or all good. “I hope it encourages us to think about the complexities of the lives we live in,” Yasmine said. “And to appreciate the context in which we have to operate.”

This book is a blueprint for how we support one another. There’s the art depicting each featured woman—beautiful portraits in their own right—all designed by women with roots in the Middle East, too. Yasmine highlighted the journey of amplifying the voices, creations and ideas of folks whose roots are woven with our own as a deeply fulfilling one. It is a guide for loving our people.

“I’m so proud of all the people that gathered around me to get it done and I wanted to showcase their work too,” Yasmine said, recalling a recent explosion in Lebanon that brought snafus to the process. “Unpredictable things happen. Things are more difficult to get done when you’re in an unstable country. It is an adventure. It was a wonderful, humbling experience.” 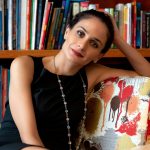 Yasmine Mahdavi was born and raised in Iran. She left Iran for the U.S. when she was twelve years old. Her career spans the corporate and nonprofits sectors, as well as entrepreneurial and philanthropic ventures. She wrote this book – her first – to her thirteen-year-old self as an homage to her country of birth and an ode to her adopted country. Yasmine is the recipient of a 2018 We Need Diverse Books Walter Grant Award and a 2019 SCBWI Nevada Mentorship. Yasmine lives in New York City with her husband, their two children, and their dog. 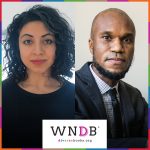 Nawal wakes each morning to a cup of strong coffee and a head full of stronger ideas. One time zone away, Cornelius does the same thing, but with tea. Over the years, the two of them met through these ideas , and they soon learned to grow many others. Together. As book people, parents and educators, they believe in the power of storytelling as a way to connect our imperfect past to the infinite potential of our future. For families. For children. And for the world. They are both educators who work in many capacities, but the capacity that energizes them the most is that they share and discuss stories with young people. There is power in this. Especially when it is done with an intentional focus on diversity. They believe that seeking words and experiences that are different from our own help us be more human. You can learn more about Nawal at NQCLiteracy.com and Cornelius at KassandCorn.com and connect with them both on Twitter @NQCLiteracy and @MisterMinor

Previous Post: « Q&A With Jason Reynolds, Stuntboy, in the Meantime
Next Post: Q&A With London Shah, Journey to the Heart of the Abyss »
We're delighted to reveal the cover for A GARDEN I