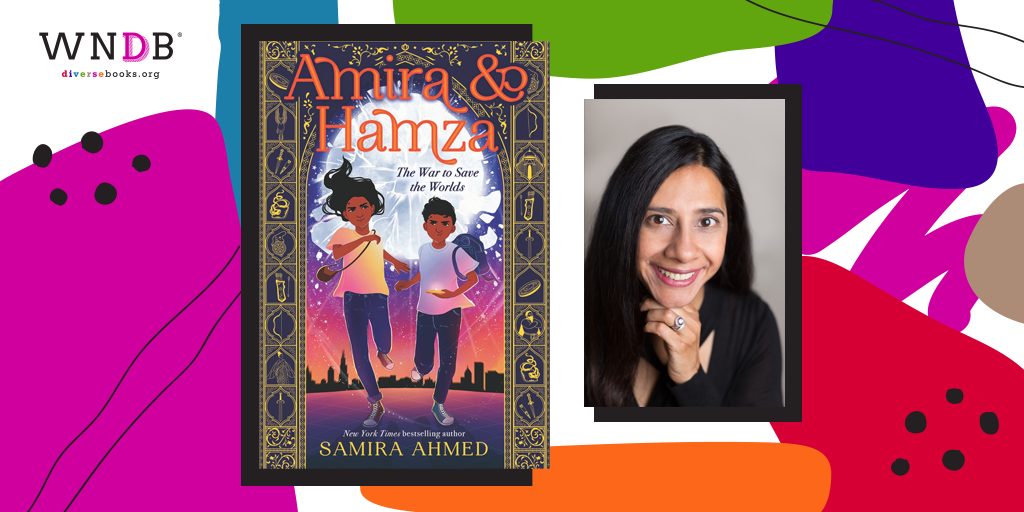 Amira & Hamza: The War to Save the Worlds is out now.

Amira and Hamza are the dynamic sibling duo everyone will love. They bicker but are incredibly endearing, and their no-holds-barred communication reveals a close-knit familial relationship that as a Middle Eastern reader, I viscerally understood. And goodness do they love each other, under all that bravado. There’s sweetness and appreciation beyond annoyed sibling facades that my own eight- and ten-year-old readers picked up on as I read aloud, responding, “aww, they’re cute,” more than once throughout the adventure.

My kids also laughed a ton. At times they seemed nervous. There was some edge-of-your-seat page turning and furrowed brows too.

Amira and Hamza: The War to Save Worlds is bestselling author Samira Ahmed’s debut middle grade novel. It is part one of a two-book adventure adapted from the stories in the ancient Hamzanama which center around the tales of the hero Amir Hamza. It’s initially set in Chicago but the sibling pair are thrust into an alternate world with challenge upon challenge that they must complete to safely make it back and save those they love, and there’s a ton of Islamic legend woven throughout.

The Hamzanama dastan, or stories, were part of a centuries-old oral tradition that Samira grew up hearing, rife with fantastical creatures, doves, ghouls and fanciful character offshoots. There is a dragon with a palace in his mouth and a flying horse with three eyes, which Samira knew were perfect elements for a rambunctious middle grade adventure. And because she’s always written for young adults, she wanted to write something her kids could read now too. They were wonderful editors throughout.

As a child herself, Samira’s great-grandmother and great-uncles added to the oral dastan their own flair that included various elements like tree-dwelling jinn, and those shape-shifters actually make it into the book. And it is that textured weaving of cultures that Samira especially appreciated, that combination of old culture with new culture and current existence too.

Growing up in the Chicago area as the oldest of three sisters, her parents’ backyard felt like a “quiet magical place.” There were four fragrant lilac trees (not dissimilar to the gardens of Qaf in the book) that met overhead with a large interlocking branched canopy. It was there that Samira’s imagination flourished.

“I had this golden rubber ball, and I would throw it and pretend that every time I threw it in there, it would be a portal to a new place,” she said. “But no character in portal stories looked like me.”

In this epic fantastical tale, Samira wove world traditions from both her family’s rich stories and ancient lore with truths she appreciates about her current realities: Chicago and sibling sagas.

“Indians have a very family-oriented culture but can be very boisterous and we don’t necessarily hold back things,” Samira said of bickering sibling stories that are also quite charming. “I wanted to capture that family dynamic. The candor the kids have with each other was important.”

There are American touchtones, too. That flying horse is named for Hamza’s pop-culture crush (Zendaya) and peppered in are plenty of Chicago landmarks and mentions, from the historic Medinah Temple to Adler Planetarium summer camp to gelato at Eataly downtown.

“I remember as a kid, any time you saw a show or read a book that referenced something connected to you as a child, you thought that was so cool,” she said. “It grounds the story in our world and specifically, Chicago.” 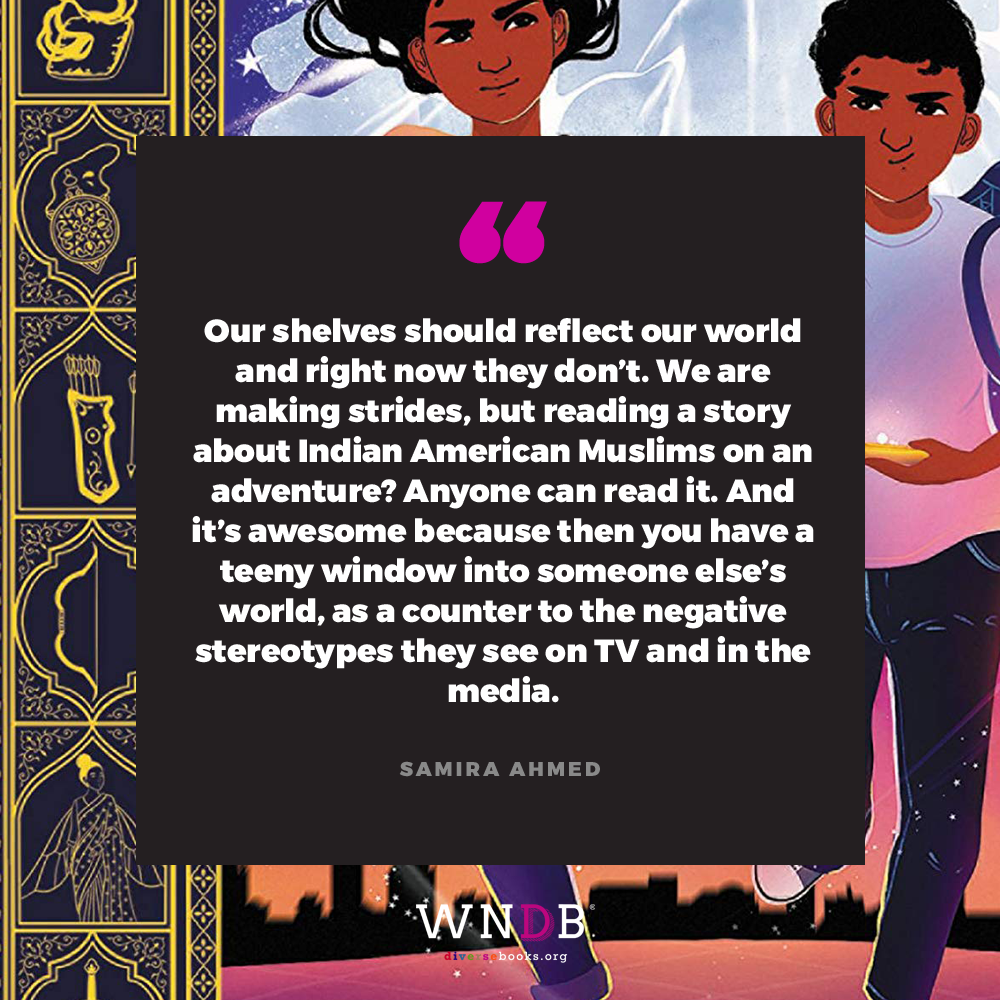 When an idea comes to Samira, she gives it her “treatment.” That means she sits down and writes a short story on the premise, trying to establish the relationship between characters and identify the tone of the story. For Amira and Hamza, for example, she wrote a scene at family dinner, with the siblings arguing over who would get the first paratha, sizzling and hot, which everyone knows is most delicious.

She asks herself about the story, “Does it have legs? Does it engage me enough to live with the characters for two years?”

“It is my favorite tool to figure out if an idea will be a novel,” Samira said.

Afterwards, she sketches out the story arc, not solely adhering to Western traditions of linear storytelling. Ancient stories include characters who disappear for whole chunks of time, and repetition that is important for memorizing oral tales. In fact, Amira and Hamza sprung forth partly from a fun family ritual with her children, when they would walk to school pre-pandemic and craft together meandering stories aloud.  Each person would add to the story — an emerald banana, for example — as collaborative story tellers.

“Young kids’ imaginations are incredible,” she said. “It felt part of my family tradition.”

Above all, this fast-paced tale exalts storytelling and the intricate weaving of cultures and traditions that make us who we are, that moves our kids to make sense of themselves and their environments. Its themes include standing up for yourself and what you believe, no matter how scared you might be. Finding that inner bravery is critical.

“Stories are an integral part of the human experience. Stories help us understand the world, each other, and ourselves,” Samira said. “We talk now about stories creating empathy and bridges but that’s how stories have been since the dawn of time.”

But Samira said stories also give us warnings, just like in Amira and Hamza. Because adults sometimes forget what our young people are grappling with, particularly in our current climate.

“A ten-year-old IS facing battles and challenges, facing conflict, and learning how to work with others,” Samira said. “They are learning to find their voices. My books often address what happens when young people have to deal with the consequences of adult decisions.”

Her characters are not easily duped. They don’t take the word of a 700-year-old jinn lightly, but instead demand answers. They want explanations. And all kids deserve this sort of representation across genres, from memoir to science fiction. (Check out Samira’s piece in A Universe of Wishes anthology).

“Our shelves should reflect our world and right now they don’t,” Samira said. “We are making strides, but reading a story about Indian American Muslims on an adventure? Anyone can read it. And it’s awesome because then you have a teeny window into someone else’s world, as a counter to the negative stereotypes they see on TV and in the media.”

Samira Ahmed is the bestselling author of Love, Hate & Other Filters, Internment, Mad, Bad & Dangerous to Know, and  Amira & Hamza: The War to Save the Worlds, as well as a Ms. Marvel comic book mini-series.  Her poetry, essays, and short stories have appeared in numerous publications and anthologies including the New York Times, Take the Mic, Color Outside the Lines, Vampires Never Get Old and A Universe of Wishes.

She was born in Bombay, India, and grew up in Batavia, Illinois, in a house that smelled like fried onions, spices, and potpourri. A graduate of the University of Chicago, Samira has taught high school English in both the suburbs of Chicago and New York City, worked in education non-profits, and spent time on the road for political campaigns.

Samira currently lives in the Midwest. When she’s not reading or writing, she can be found on her lifelong quest for the perfect pastry. 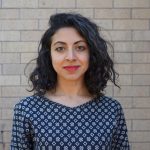 Previous Post: « Writing YA as Freedom
Next Post: Q&A With Adrianna Cuevas, Cuba in My Pocket »
Applications are open for Literary Agents of Chang