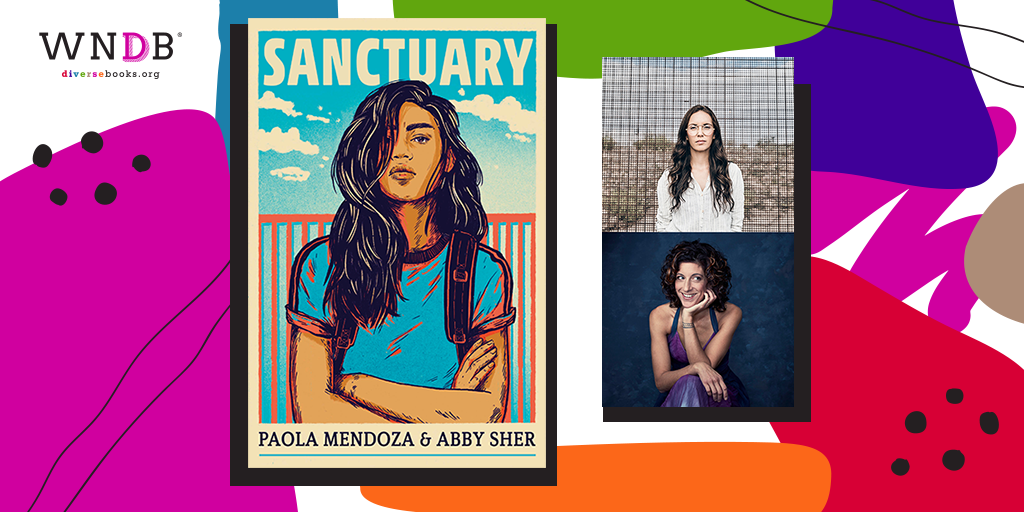 I woke up on November 9, 2016, to my six-year-old son dancing and cheering, “We did it! We did it!” I was asleep on the couch, hungover from watching the election results being tallied, the maps flashing red and blue and red and red and red. I’d forgotten to take down our victory sign that said FIRST FEMALE PRESIDENT!

He collapsed into angry tears. Stammering out all the questions I was asking,

I’m embarrassed to admit it, but I had no idea how Trump had been elected and what liberties were now at stake. I had no concept of the systemic racism and xenophobia that was already in our drinking water. I hadn’t paid attention and subconsciously denied that there were corruption and cruelty throughout this country. I was heartbroken and disgusted with this country, but most of all, with myself.

So I vowed to learn. I joined action committees and marched on Washington. I tried meditating. I did what I thought I could, though it was not nearly enough. That was clear the moment I saw Paola Mendoza’s reporting from the southern border. On November 1, 2018, Paola and photographer Kisha Bari went to Oaxaca, Mexico with the organization Families Belong Together to join the caravan of Central American refugees seeking asylum. Most of these people were fleeing overwhelming poverty, gang violence, rape, and extortion. Many didn’t have food, water, or even a tent to sleep in. They were desperate to get themselves and their children to safety. To sanctuary.

And as they approached the U.S. in this vulnerable state, the president tweeted that they were “a National Emerg[enc]y.” He teargassed the children.

I read and reread Paola’s words. I couldn’t turn away. I’d never seen or heard the stories of immigrants told in such a raw, vulnerable, and yet uplifting way. I was stunned and inspired. I needed to meet and learn from Paola. And I needed to do it before the next election.

I got a call from my agent that she was interested in talking to me. I maybe sort of wooed her with a card and a lollipop. And when she chose me to write a book with her, I knew I’d found my purpose.

Sanctuary, which came out on September 1, is more than a book. It’s a call to action. It’s about a sixteen-year-old girl named Vali who’s being hunted down by the government because she is undocumented. Paola and I sat in a room for days, mapping out our hero’s journey. We used a huge whiteboard, scribbling maps and arrows and unanswerable questions like,

How can she get there?

Who gives her family up?

Where can they find safety?

We fell in love with our hero, Vali. She was 16, born in Colombia, living in Vermont with her mami and little brother, Ernesto. We wrote about her dancing, her drawing, her hunger for color in a world that had been reduced to sterile white-walled classrooms, and whitewashed history textbooks that never told the truth. 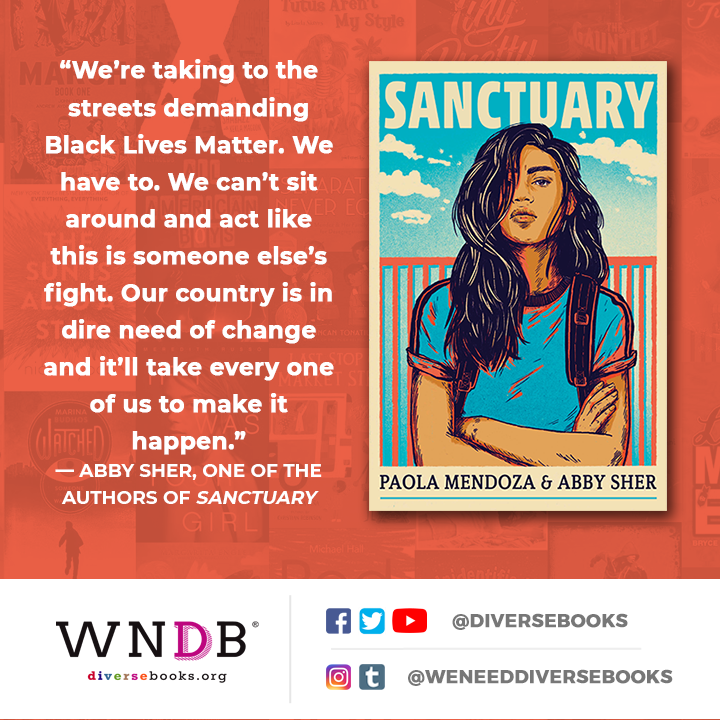 We set out to write a dystopian future, almost as an allegory or What if? But the breaking news alerts, tweets, and phone calls kept proving that all of these horrors were happening right here, right now. So we set Vali’s story in 2032 — close enough so we could urge readers to think about how much worse this country can and will get if we let it. That’s the terror and the triumph of our book. Because the human potential to be this cruel and predatory to people we label as “other” is very much alive, especially in America. At the same time, the fierce hope and spirit of activism and revolution are here too.

Vali is an undocumented immigrant fighting for her life and the safety of her family. She doesn’t have superhuman strength or a magic cape; she’s a teenager who likes lip gloss and dancing. Her superpowers are grit, loyalty, and perseverance. She is a real person, a real possibility, in both the way she is treated by others and the way she demands to be heard. We want every reader to feel like she or he could be Vali too.

We imagine teenagers and their parents reading the book in unison and having tough discussions over the dinner table. We imagine young people challenging adults around their ideas and responsibilities in our current world. We imagine Sanctuary to be part of an urgent movement for justice because we don’t have time to stand by and watch our world burn.

We’re in a moment of national awakening. We’ve been rocked by a global pandemic and forced to examine our mortality. We’re grappling with overwhelming disparities in education, healthcare, and housing. We’re taking to the streets demanding Black Lives Matter. We have to. We can’t sit around and act like this is someone else’s fight. Our country is in dire need of change and it’ll take every one of us to make it happen.

It will take every one of us listening and honoring each other’s stories; respecting everyone and demanding true equality.

This is why we wrote this book.

Sanctuary is our clarion call to action.

Sanctuary by Abby Sher and Paola Mendoza is on sale now. Order it here! 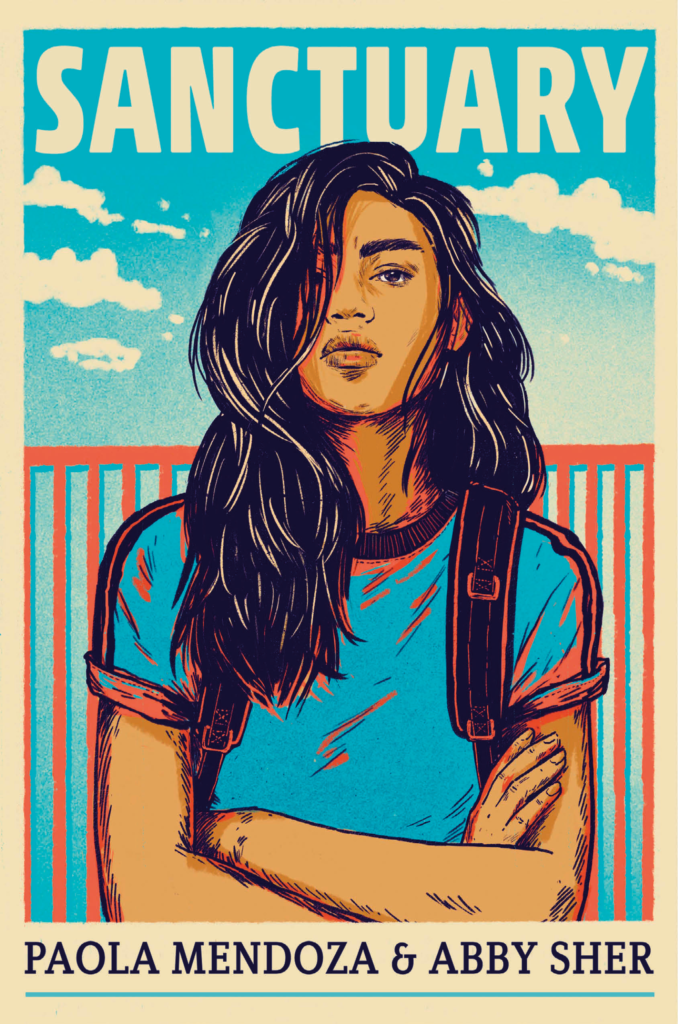 Co-founder of the Women’s March makes her YA debut in a near-future dystopian where a young girl and her brother must escape a xenophobic government to find sanctuary.

It’s 2032, and in this near-future America, all citizens are chipped and everyone is tracked–from buses to grocery stores. It’s almost impossible to survive as an undocumented immigrant, but that’s exactly what sixteen-year-old Vali is doing. She and her family have carved out a stable, happy life in small-town Vermont, but when Vali’s mother’s counterfeit chip starts malfunctioning and the Deportation Forces raid their town, they are forced to flee.

Now on the run, Vali and her family are desperately trying to make it to her tía Luna’s in California, a sanctuary state that is currently being walled off from the rest of the country. But when Vali’s mother is detained before their journey even really begins, Vali must carry on with her younger brother across the country to make it to safety before it’s too late.

Gripping and urgent, co-authors Paola Mendoza and Abby Sher have crafted a narrative that is as haunting as it is hopeful in envisioning a future where everyone can find sanctuary. 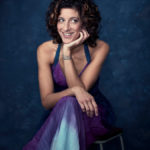 Abby Sher is an award-winning writer and performer. She is the author of Miss You Love You Hate You Bye, All the Ways the World Can End, Breaking Free, Amen, Amen, Amen: Memoir of a Girl Who Couldn’t Stop Praying and Kissing Snowflakes. One of her essays was included in the first season of Amazon TV’s, Modern Love. Abby has written and/or performed for The New York Times, The New Yorker, The Second City, Upright Citizen’s Brigade, HBO, and NPR. Writing Sanctuary with Paola Mendoza has been a dream come true. 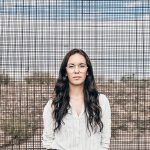 Paola Mendoza is a film director, activist, author, and artist working at the leading edge of human rights. A co-founder of The Women’s March, she served as its Artistic Director and co-authored the New York Times bestseller Together We Rise: Behind the Scenes at the Protest Heard Around the World. Paola’s most recent book Sanctuary was released to critical acclaim by Penguin.  Ms. Mendoza is also a film director whose films have premiered at the most prestigious film festivals around the world.  Her films have thoughtfully tackled the complex issues of poverty and immigration on women and children in the United States.  She was named Glamour’s Woman of the Year in 2017 and one of Filmmaker Magazine’s 25 New Faces of Independent Film. She is a co-founder of The Soze Agency and is a co-founder of The Resistance Revival Chorus, the critically acclaimed women’s chorus that believes, “Joy is an act of resistance.”

Previous Post: « Cover Reveal for Bindu’s Bindis by Supriya Kelkar, Illustrated by Parvati Pillai
Next Post: How Laura Taylor Namey Wrote a Book About Grief After the Loss of Her Grandmother »
Applications are open for Literary Agents of Chang