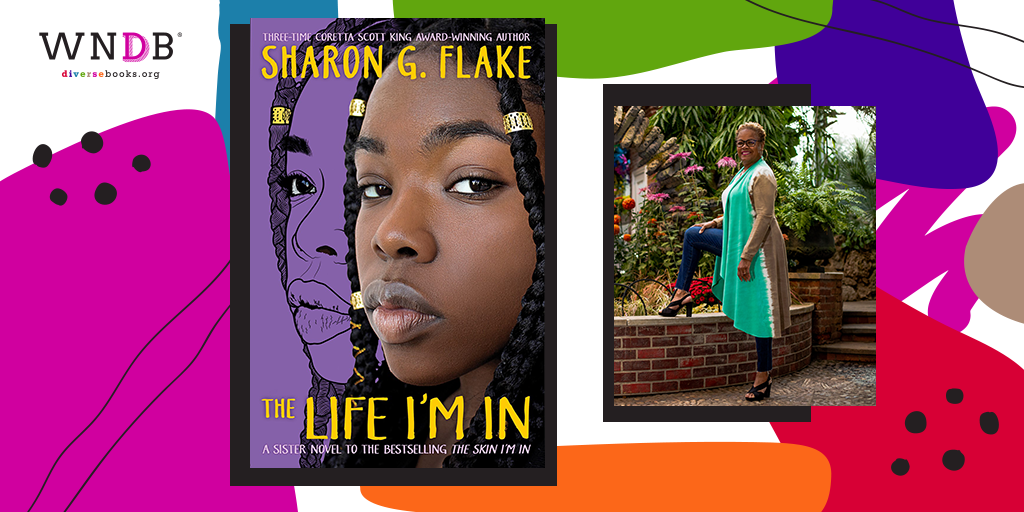 The first book I ever published was The Skin I’m In. The first editor to read it was the one who purchased it. The Skin I’m In went on to win awards and become a classic, read in thousands of classrooms around the world, selected by book clubs, and written about in Ph.D. dissertations and high school college applications.

For the few who may not know, The Skin I’m In is the story of Maleeka Madison, a young girl who’s bullied because of her dark skin color and tattered clothing. Chief among her tormentors is Charlese “Char” Jones. For different reasons, Char has gained as much notoriety as the protagonist, Maleeka Madison. Teachers and students alike inquire about her. Some worried about her fate. Char herself had been bullied by her sister and lived in an unstable home. Frankly, she was an unlikely character to build a follow-up novel around. Yet, I have.

The Life I’m In is the sister novel to The Skin I’m In. It’s the answer to all the questions people have had over the years concerning Char. The book picks up where The Skin I’m In leaves off. Char boards a bus to Alabama but decides along the way that she has other plans. Separated from family and in need of friendship and finances, Char—like thousands of teens around the globe—ends up on the radar of a predator. What happens next will leave readers biting their nails, tearful, hopeful, cheering, and ready, hopefully, to learn and do more about human trafficking.

A good portion of The Life I’m In was written in my father’s home in Philadelphia. Everything I know about family, community, loving Black life and culture, I learned there. So it was not an easy journey back once I learned that my father was ill. Nights were the most difficult. Dad found it hard to sleep, and at ninety-three, began to fear death. We developed a ritual of sorts. In the wee hours of the night, I would tiptoe into his room to comfort him.

In the glow of his television, I would make my way across the room, laptop in hand. For the next few hours, I would write the most difficult parts of Char’s journey. It seems like kismet, that I was home as Char made her way into the world and then back to her own home again. I left home for college decades ago. But I never lost the desire to run home in good times and bad, during lean moments or plenty. Home runs through the book as it runs through my veins. If she can just make it there, Char believes she could reset her life and start anew. She isn’t totally wrong. 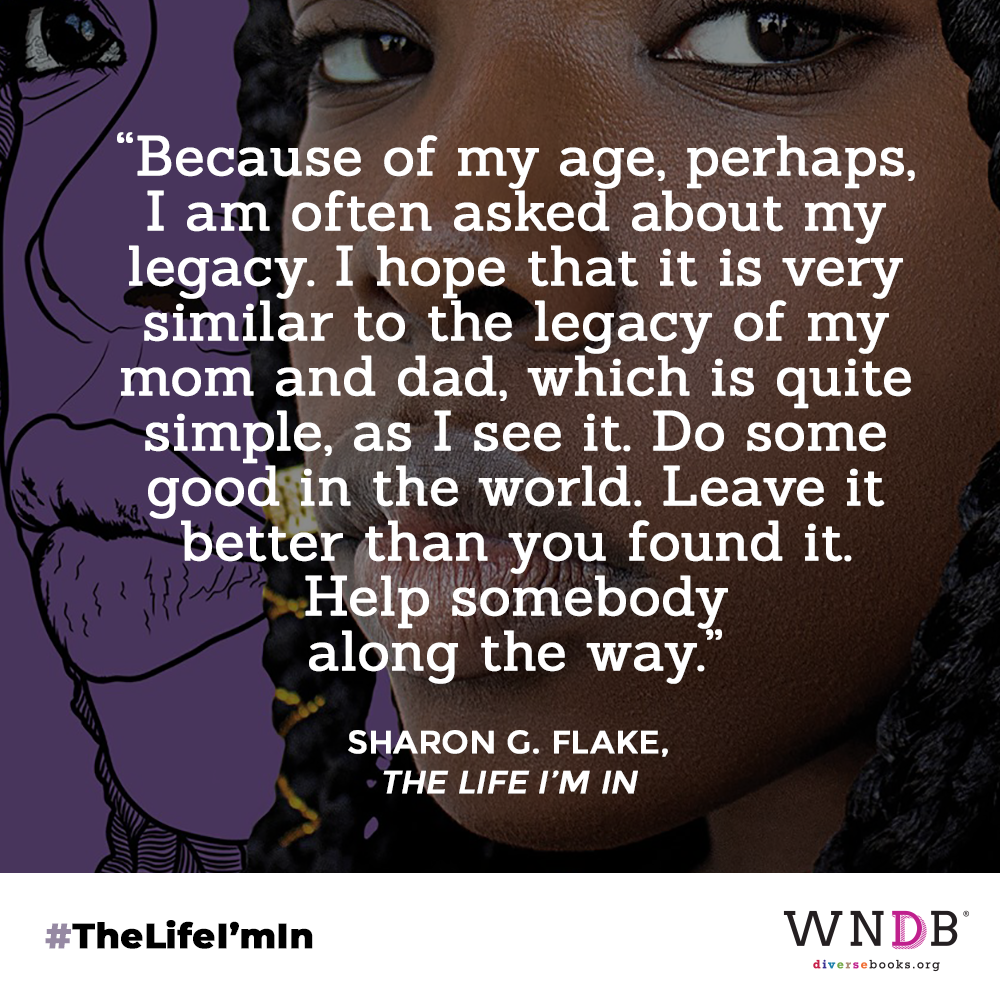 In the novel, things go from bad to worse to terrible. Yet, the girls and women in the book are a powerful force who help Char survive many storms. One of those women is among the most recognizable educators in literature, Miss Saunders from The Skin I’m In.

The Skin I’m In has become a how-to book in many ways. Young people read it and learn how to value themselves more, find their voice, and be more empathetic. The Life I’m In will have a similar impact on readers, I believe. Can a bully be redeemed? That’s a question the book addresses. Is God in our mess? Can we truly ever go home again? Those questions are on the table as well.

Often, I am asked why it took me twenty-plus years to write a follow up to The Skin I’m In. I suppose there are many answers. The one that makes the most sense is simply that the time had come. You see, Maleeka and her friends didn’t just help thousands of teens grow into themselves. They helped me too. Like my dad, even in his younger years, I had my fears. I was afraid of being seen, speaking up, running my own race. Being on the road and opening up to middle and high school students, helped me as much as it helped them. Writing over the years, even after I became stuck for a bit, strengthened me also. To tackle the topics in The Life I’m In took both literary skill and inner strength. That comes with time and growth. It comes with allowing yourself to be vulnerable and knowing when to ask for help. Both Char and I were ready, I suppose.

At nearly sixty-five, I am excited about ushering another novel into the world. Because of my age, perhaps, I am often asked about my legacy. I hope that it is very similar to the legacy of my mom and dad, which is quite simple, as I see it. Do some good in the world. Leave it better than you found it. Help somebody along the way. I think my work, especially The Skin I’m In, has done just that. Charlese, once a bully, will do lots of good on the planet too. So can a bully be redeemed? Absolutely. Is it ever too late for us to change and go in a different direction? Never! Which is why I love being an author. We get to raise those issues in ways the reader can understand and receive. And to impact the lives of others as well as our own. What, might I ask, is better than that? 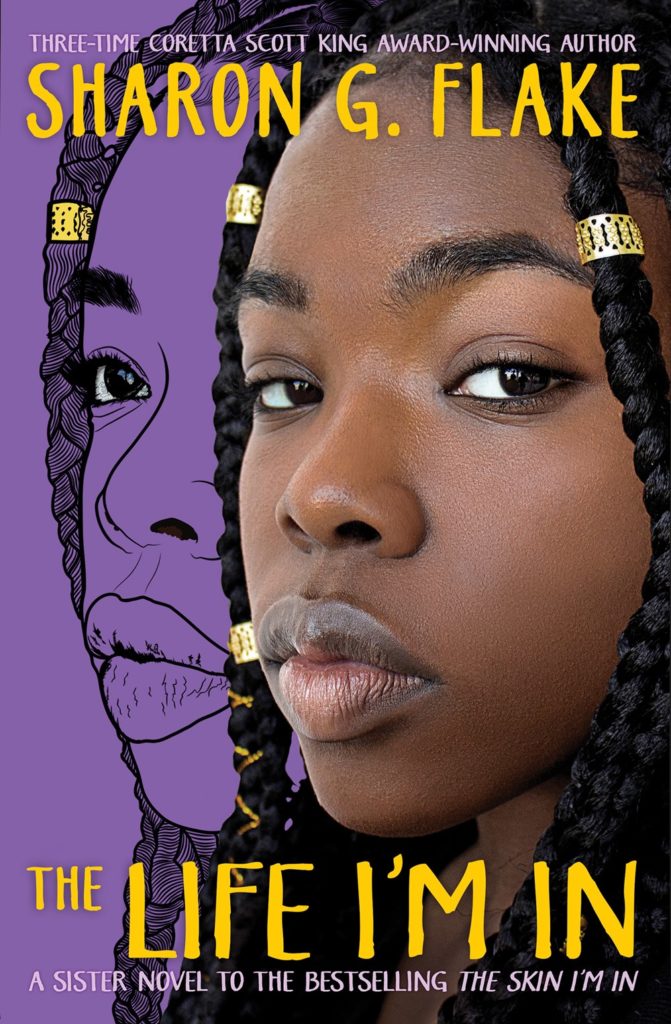 The powerful and long-anticipated companion to The Skin I’m In, Sharon Flake’s bestselling modern classic, presents the unflinching story of Char, a young woman trapped in the underworld of human trafficking.

My feet are heavy as stones when I walk up the block wondering why I can’t find my old self.

In The Skin I’m In, readers saw into the life of Maleeka Madison, a teen who suffered from the ridicule she received because of her dark skin color. For decades fans have wanted to know the fate of the bully who made Maleeka’s life miserable, Char.

Now in Sharon Flake’s latest and unflinching novel, The Life I’m In, we follow Charlese Jones, who, with her raw, blistering voice speaks the truths many girls face, offering insight to some of the causes and conditions that make a bully. Turned out of the only home she has known, Char boards a bus to nowhere where she is lured into the dangerous web of human trafficking. Much is revealed behind the complex system of men who take advantage of vulnerable teens in the underbelly of society. While Char might be frightened, she remains strong and determined to bring herself and her fellow victims out of the dark and back into the light, reminding us why compassion is a powerful cure to the ills of the world.

Sharon Flake’s bestselling, Coretta Scott King Award-winning novel The Skin I’m In was a game changer when it was first published more than twenty years ago. It redefined young adult literature by presenting characters, voices, and real-world experiences that had not been fully seen. Now Flake offers readers another timely and radical story of a girl on the brink and how her choices will lead her to either fall, or fly. 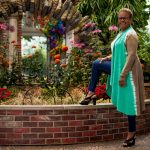 Sharon G. Flake exploded onto the literary scene with her novel The Skin I’m In, in 1998, and was named a Publishers Weekly Flying Start. Since then she has become a multiple Coretta Scott King Author Honor Award winner and many of her novels have received ALA Notable and Best Books for Young Adults citations from the American Library Association. She lives in Pittsburgh, Pennsylvania. Please visit Sharon‘s website at sharongflake.com.