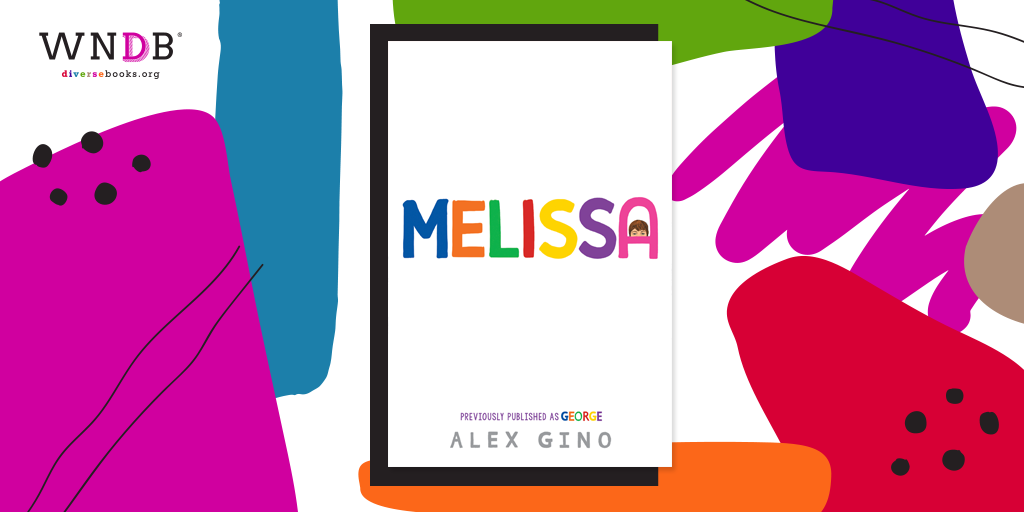 Annotation can be more than just an effective reading comprehension strategy. As educators and librarians are learning, it can be a form of activism and advocating for change.

#SharpieActivism started in July of 2021 at the behest of Alex Gino, the author of the books You Don’t Know Everything, Jilly P!, Rick, and Melissa (also known as George; we use the updated title). When inviting #SharpieActivism, Gino acknowledged “a big mistake” and apologized to their character Melissa, “the larger trans community,” and readers:

“I think the disconnect between the name George and the pronoun she is a valuable literary technique and reflects the tension many trans people feel, especially before coming out to others,” Gino said. “But on the cover? It is an unequivocal error. Using a person’s name is a basic form of respect, and I failed my main character.”

Educators have annotated, too, fixing copies of Melissa available in classrooms and school libraries. Joy Kirr, a middle grade literacy educator in Illinois, began the academic year with an annotation: “I was finally able to do this on my first day back in the classroom.” Carolyn Bailey and her colleagues at Princeton Middle School, in New Jersey, organized an afterschool activity with students: “Help us fix all the copies… that we can find.” The school’s books now sport redesigned covers and also stickers that explain to readers, “What happened to this book?” 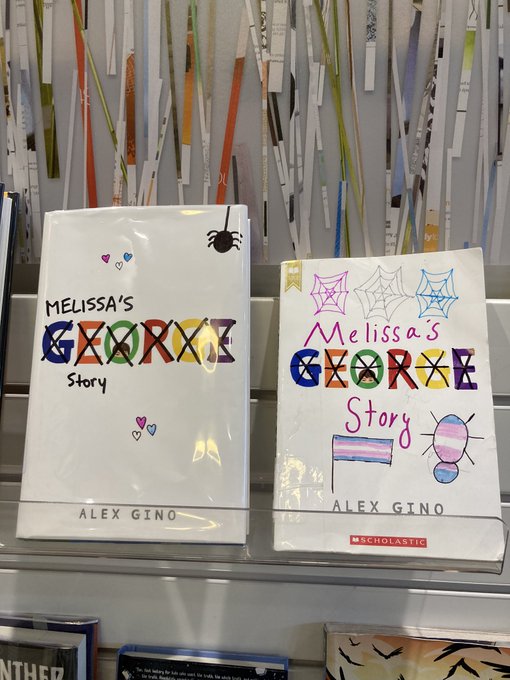 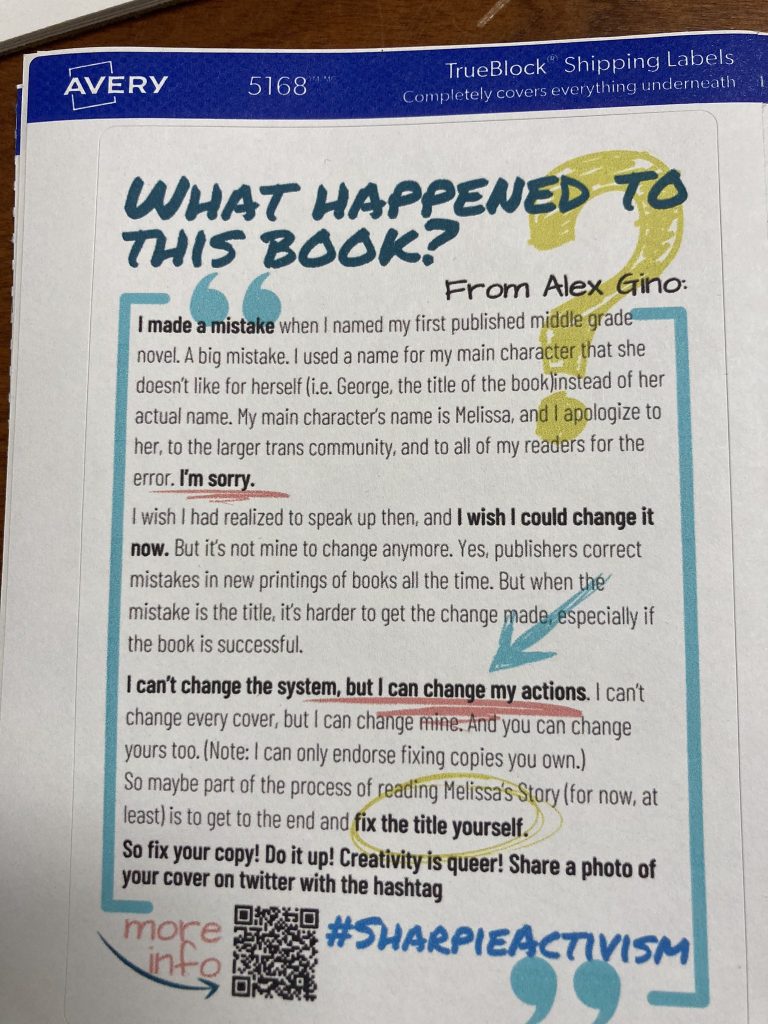 Over the past few months, educators and librarians have shared images of corrected copies and tagged their posts with #SharpieActivism on Twitter, Instagram, and even TikTok. With annotation, they have sent a message to colleagues, administrators, parents, and, most importantly, their students and patrons: It may be necessary to write on and in a book, because it’s imperative to publicly support trans youth.

The award-winning Melissa was published in 2015 and lauded as a “timely, touching novel” for middle grade readers. The story follows fourth-grader Melissa and her coming-out as a transgender girl, and the challenges of being recognized for who she is. Melissa is now among the vanguard of middle grade books that have made visible “authentic and expansive representations” of trans youth. Yet it has appeared, annually, on the American Library Association’s “Top 10 Most Challenged Books Lists.” For the past three years, Melissa has been the most challenged book in America.

Explaining the title change in their blog post, Gino featured an earlier tweet about trans justice that reminded readers: “You officially have my permission to correct your copy of Melissa’s Story” (Gino’s initial post suggested readers retitle the book as “Melissa’s Story”). The public embrace of Gino’s invitation and readers’ subsequent #SharpieActivism—in classrooms, at libraries, and online—spurred Scholastic to announce that it will publish a new edition of Melissa, with the updated title and redesigned cover, in the spring of 2022. Accompanying the announcement Gino wrote, “What we call people matters and we all deserve to be referred to in ways that feel good to us.”

We’re former classroom teachers who are now literacy researchers and teacher educators. And we read #SharpieActivism as annotation. As we discuss in our book Annotation, adding notes to texts is an everyday literacy practice which thrives within, but also transcends, books, classrooms, and libraries. Indeed, annotation is a way for people to express power, present alternative perspectives, and compel social change.

We recently had the privilege of interviewing Gino about Melissa, #SharpieActivism, and the importance of writing in books. “One of the most active things you can do to a book,” they told us, “is to literally change the book for the next person who reads it. To engage with it. To leave your mark on it. With a marker.”

Now is a critical time for educators, librarians, and the youth they serve to read Melissa, participate in #SharpieActivism, and engage with trans stories. As Gino noted, much should be done to create classrooms that are “welcoming, open, and affirming,” with educators who are “already conscious of not saying ‘boys and girls,’ already conscious of not having boys lines and girls lines, and [who are] conscious of the fact that we are in a moment of change.”

Students returned to school this fall burdened by the compounding traumas of COVID-19, racial injustice, and the climate crisis. 2021 is also, according to the Human Rights Campaign, the “worst year for anti-LGBTQ+ legislation in recent history.” Only four states in the country—California, Colorado, Illinois, and New Jersey—mandate teaching LGBTQ+ history in public schools. According to GLSEN’s 2019 National School Climate Survey, less than half of surveyed students reported finding information about LGBTQ+ issues in their school library. Even one annotated copy of Melissa in a classroom or school library could improve these statistics and make a difference for students, combined with other resources such as the New York City Department of Education’s “Hidden Voices: LGBTQ+ Stories in United States History,” a social studies curriculum, with accompanying educator toolkit. The initiative reflects efforts to support LGBTQ+ inclusive curriculum and encourage educators’ affirmation of LGBTQ+ identities.

Annotation, through participation in #SharpieActivism, is one practical and significant step toward creating more inclusive classrooms, schools, and libraries for trans youth. Many educators and librarians have now participated in what Gino described as “interactive reading.” And others should join because, as Gino emphasized to us, “there are many copies” of books and “I don’t believe that the book is sacred. I believe that the text is sacred. I believe that the words are sacred.” The act of writing on Melissa, of marking up the book and fixing the cover, illustrates how words—and especially names—remain sacred when collaboratively written by both author and reader.

For Gino, readers’ participation in #SharpieActivism speaks to themes of acceptance, respect, and social change. “It’s very true to the trans experience,” they shared, “to have been known as one thing, and to have to ask people to change [their actions]. To ask people to do something they don’t usually do. And do something that maybe even feels against the rules.” The need for change reflects the sentiment of Christopher Hunt. He is a teacher-librarian in British Columbia who tweeted: “After learning of @lxgino’s reflections on their book title, I felt I definitely needed to make some improvements to their book covers, too.” When students at Hunt’s school now open Melissa they find customized book pockets that hold printed copies of Gino’s #SharpieActivism blog post. 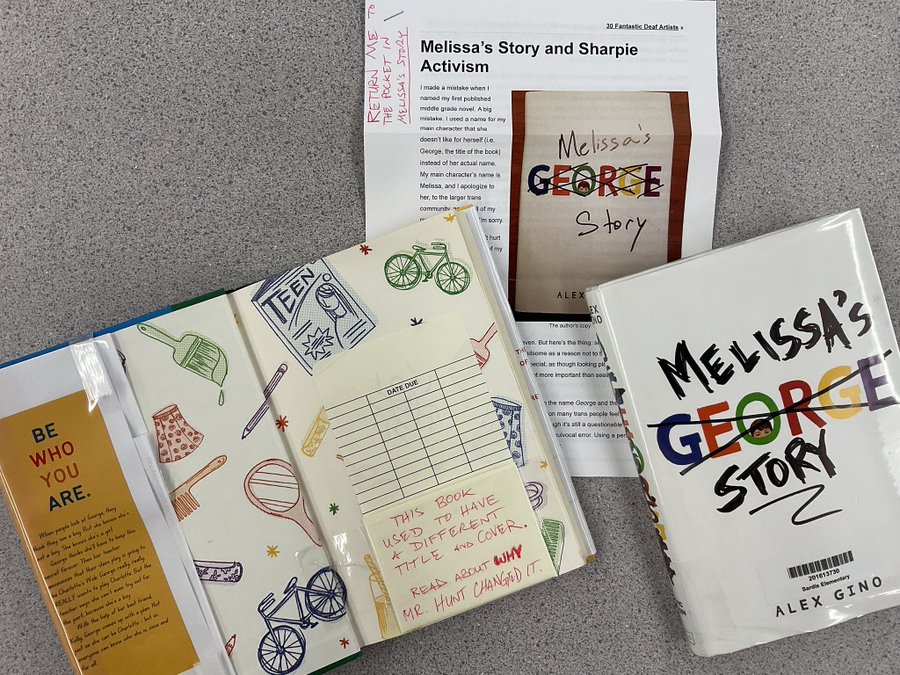 Amidst recent actions by school districts to ban books and restrict students’ access to diverse perspectives, #SharpieActivism is evidence of more equitable educational possibilities. Handwritten and heartfelt contributions have helped co-author a counternarrative that resists anti-trans injustice. Gino’s call for creativity and correction is a timely invitation for teachers and librarians to reimagine the role of annotation and, more importantly, the affirming representation of trans narratives and other LGBTQ+ stories in schools and libraries. For Gino, “The purpose of activism is to invoke change.” And their assessment of #SharpieActivism leading to Melissa is succinct: “It’s a successful campaign. In the purest sense of trying to create a change.”

Whether in the classroom, at the library, or online, #SharpieActivism makes visible a teachable moment about the power of annotation—as well as whose voices, identities, and stories are both welcome and necessary so as to advance justice-directed literacy education and learning.

Remi Kalir is an Associate Professor of Learning Design and Technology at the University of Colorado Denver. He studies how social annotation enables collaborative, open, and equitable learning. Remi was a New York City public school teacher before completing this Ph.D. at the University of Wisconsin-Madison. Connect with Remi on Twitter at @remikalir.

Antero Garcia is an Associate Professor in the Graduate School of Education at Stanford University. His work explores how technology and gaming shape learning, literacy practices, and civic identities. Antero was an English teacher at a public high school in South Central Los Angeles prior to completing his Ph.D. at UCLA. Connect with Antero on Twitter at @anterobot.