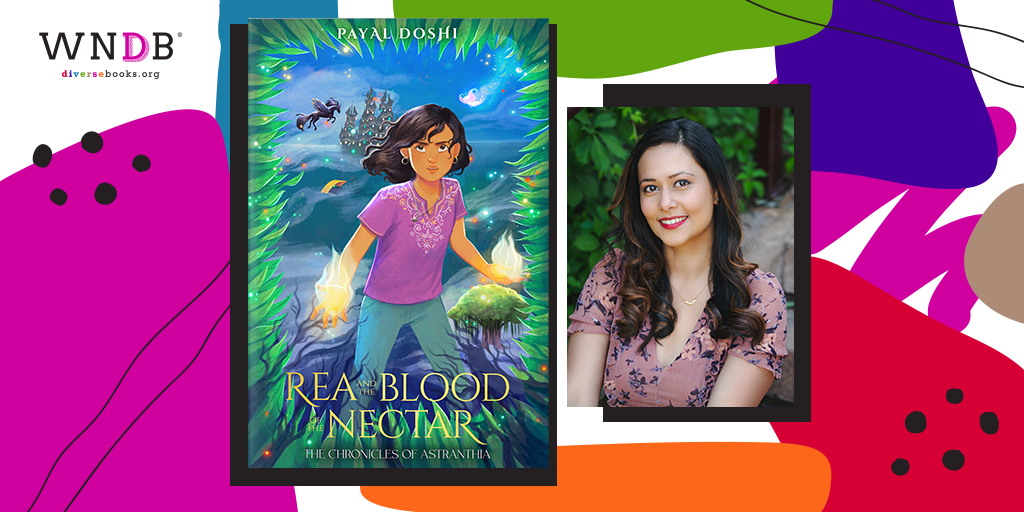 Rea and the Blood of the Nectar by Payal Doshi is on sale on June 15.

Picture a twelve-year-old with magic.

Do you see a white kid with brown or blond hair living in England or America? Or a brown-skinned girl with dark eyes and dark hair living in an apartment complex in India?

The former I suspect.

As someone who grew up in India and spent nearly twenty-seven years of her life there, I wondered why was that? Why was it that when I sat to write a children’s fantasy novel, I, too, did not imagine a brown-skinned girl from a place I had grown up in?

The answer is pretty straightforward. I loved to read as a kid. But back then, I hadn’t read any children’s novels by Indian or South Asian authors or read about characters who looked like me, a brown Indian kid. So, it never occurred to me that my love of reading and language could be anything more than a hobby. It wasn’t until I was 27 years old and a graduate in business management that I realized I should give writing a book a shot.

Middle-grade books have a special place in my heart. I was a young middle schooler when I fell in love with reading. I devoured Anne of Green Gables by L.M. Montgomery, The Chronicles of Narnia by C.S. Lewis, The Nancy Drew Files, and the Sweet Valley High series (to name a few). With these books, I escaped into fantasy realms and real-life places in western countries, which felt just as fantastical to me! The girls in these books were strong, fierce, funny, and flawed. They didn’t have all the answers but had the courage to find them.

I knew immediately that was the type of story I wanted to write. A young girl who was strong in spite of her insecurities embarking on a magical adventure of a lifetime.

But when I wrote the first 70,000 words, they were about a twelve-year-old girl who was white, had a white family, and lived in the English countryside—all the while as I sat at my desk in Mumbai in the sweltering summer heat with the air conditioning on full blast as crows cawed on Ashoka trees and rickshaws and lorries blared their horns outside my window.

Never having seen myself in ‘happy,’ ‘joyful,’ ‘adventurous,’ or ‘magical’ stories as a kid, my subconscious led me to write about characters that I’d read about umpteen number of times doing those exact things, except they didn’t look like me. I didn’t think my Indian background was interesting enough to be the driving force of a happy, joyful story. Since the children’s books I’d read only had white characters in them, my mind was trained into thinking that those were the stories worth telling. That my own story, one that I hadn’t ever read about or seen portrayed, was not worth telling. Without my knowing it, it diminished my identity, my experiences, my uniqueness, and my self-worth.

The statistic these days is changing with more children’s books with South Asian characters being published (although there aren’t nearly as enough). These stories are often centered around finding one’s identity in a foreign land or escaping hardship for a better life. The plot of my novel was not based on any of those subjects, so I assumed no one wanted to read a book about a girl like me from India, going on an adventure, discovering she had magic, and being the ‘chosen one’ to save her brother and a magical realm.

I’d come to accept that the Indian narrative had to either explore the struggles of the immigrant experience or be rooted in the challenges of living in poverty or war (in the case of historical fiction), neither of which reflected my experience as a South Asian Indian. It seemed my regular, middle-class experience of being Indian had no place in books. The saddest part was that I hadn’t contemplated for even one second if I should write about an Indian girl going on an adventure. My subconscious had automatically dictated that if I were to write that kind of a fun and thrilling story, only white characters could be a part of it.

It is heartbreaking to think that your story is worth writing about only if it was embedded in pain and hardship. It made me feel guilty of having a joyful experience to share as part of my South Asian existence.

It was only when my writing teacher in India asked me with great disappointment why I hadn’t chosen to write about Indian kids (it was clearly not the first time she had come across a young Indian writer who had written about white characters), I felt deflated. I loved my life in India. I loved the food, the culture, the clothes, the deep sense of family, my years of schooling, and university. I realized I should be proud of writing about my experiences and celebrating them with the world. If Lyra Belacqua, Harry Potter, and Nancy Drew can have incredible adventures, why can’t an Indian kid have them too? A girl like me never got to be the hero, have magic, or save a realm. 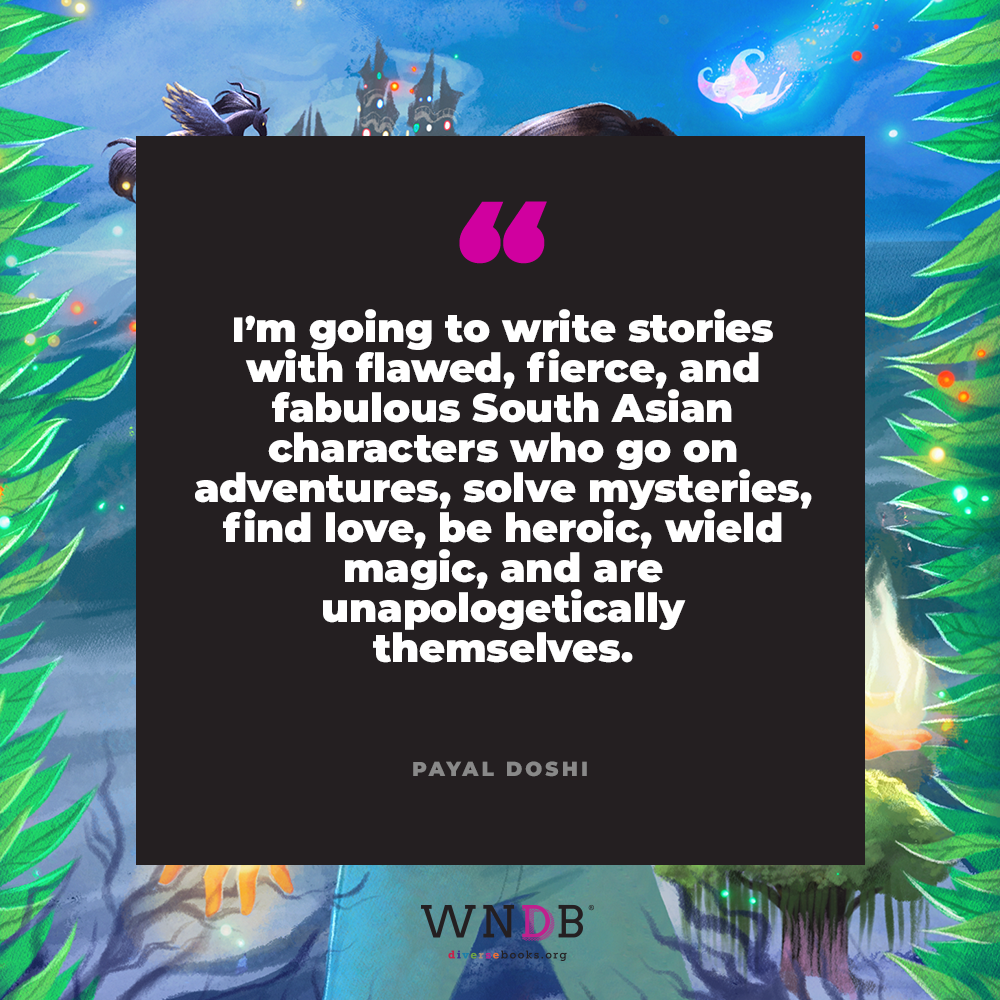 Right then, I knew I wanted to change that. So I wrote a fantasy story rooted in Indian culture with Indian kids going off on thrilling adventures and becoming heroes. It’s a story I would have loved to read as a kid and one in which I saw myself.

Another decision I made early on was to set my book in Darjeeling. I wanted to break the stereotype some people have of the country and portray a region of India that was beautiful and underrated with respect to its landscape and people. The city of Darjeeling is a stunning hill station in the northeast part of the country ensconced within hills, the view of the majestic Himalayas, and rolling tea plantations.

When it came to my main characters, I strived to do the opposite—show the world that these kids were just like other kids. I wanted to show readers, especially young white readers, that being Indian was only one facet of their identities. As someone who grew up loving books with white characters, I knew that the color of a character’s skin and where they lived were just details like the color of their hair or the shoes they wore, or their favorite sport. It didn’t differentiate them from me in a way that made them unrelatable.

So, when I sat to write Rea, Leela, and Rohan, I gave them well-rounded personalities with each of them having their own strengths and insecurities. Rea is a flawed but curious girl who is on the hunt for answers to questions that plague her. Leela is a ray of sunshine, but she oftentimes feels overlooked by her family. Rohan is extroverted and the popular kid in school, but he comes to learn how that affects his sister. The beauty of books is that they chronicle the human experience. An experience that is largely universal. Themes in children’s books such as family, friendship, discovering your identity, the trials of growing up, experiencing your first crush, dealing with complex emotions like grief, loss, death, as well as the exhilaration of escaping into fantasy lands and being a hero are themes every kid can relate to no matter the color of their skin, the location of their home, or their race and nationality.

Diverse representation, especially South Asian representation, has been my mission and passion in writing Rea and the Blood of the Nectar. It is important to me that South Asian kids see themselves as main characters in a book, know that they are worthy of going on adventures and being heroes, and believe that their stories can be fun, fierce, and empowering too.

Stories which tackle tougher subjects such as the immigrant experience, dealing with racism, and escaping hardship are infinitely important too. These stories are vital. These stories are needed. These stories open a door into a life many haven’t seen. But they are not our only stories. Just like our white counterparts, the South Asian narrative is multifaceted with myriad, if not countless, narratives.

My hope is for all types of narratives from underrepresented minorities to be brought to the forefront. Kids from marginalized backgrounds shouldn’t have to be typecast into having only one kind of story define their whole existence. We need to see kids from marginalized backgrounds in every avatar: from neurotypical, neurodiverse, queer, to disabled kids being portrayed as heroes, leaders, realm savers, popular kids, magic-wielding rebels with a cause, sci-fi explorers, and those who fall in love. Only by sharing varied narratives of marginalized groups will we create a world where people see each other without bias against the color of their skin and where people can be seen as individuals with full and multifaceted lives.

Until that time comes, I’m going to write stories with flawed, fierce, and fabulous South Asian characters who go on adventures, solve mysteries, find love, be heroic, wield magic, and are unapologetically themselves. So when a South Asian girl or boy sits down to write a novel, they won’t think twice about writing a character who looks like them. Whatever their story might be.

And if someone is asked to picture a twelve-year-old with magic, they just might think of a South Asian kid embarking on a quest to save the world. 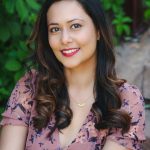 Payal Doshi has a Masters in Creative Writing from The New School, New York. Having lived in India, the UK, and US, she noticed a lack of Indian protagonists in global children’s fiction and one day wrote the opening paragraph to what would become her debut middle grade novel. Raised in Mumbai, India, she currently lives in Minneapolis, MN with her husband and three-year-old daughter. When she isn’t writing, you can find her nose deep in a book with a cup of coffee or daydreaming of fantasy realms to send her characters off into. Learn more at www.payaldoshiauthor.com, @payaldoshiauthor on Instagram and @payaldwrites on Twitter. Rea and the Blood of the Nectar, book one in The Chronicles of Astranthia series releases June 15, 2021 from Mango and Marigold Press.

Previous Post: « Take a Look at Ellen Oh’s Little Free Library
Next Post: I Am Once Again Asking You To Use the Word Lesbian »
LAST CALL for WNDB 2023 Internship Grant Partners!