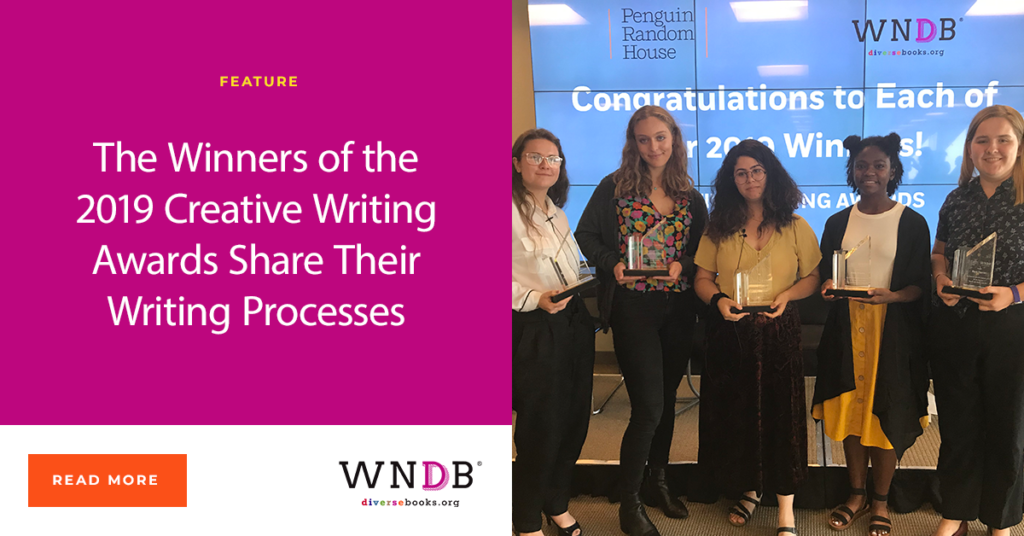 This summer, Penguin Random House and We Need Diverse Books celebrated the 2019 Creative Writing Award winners in New York City. Five high school seniors received a $10,000 scholarship and a day at Penguin Random House. Winners met with editors to discuss their work and read their winning pieces to a crowd of family and publishing professionals. WNDB chatted with the winners about their work, their writing backgrounds, and more.

Stay tuned for information on how to apply for the 2020 Creative Writing Awards!

On what writing her poem meant to her, Sanchez says: I think about my relationship with my mother a lot when I’m thinking about my tie to being Dominican and living in the Bronx, and being the first-generation, first-born kid. My mother and I have always had a weird relationship, not entirely understanding one and other and I think a lot of that comes from the fact that she immigrated here in her teens, and she didn’t know English at all, but here I am, writing things. And so I wanted to illustrate that in the poem, there’s something about the colors that are mentioned in that poem and the red spices and smells, I wanted it to be something immersive and resonant of my childhood, but also the place that we’ve ended in up together. I wanted it to span a lot. It means a lot to me that that poem did well.

On the meaning and issues of her piece, Brooks says: To me, my piece is a defining aspect of my life, because my piece is about my skin and dark skin in general. It’s kind of layered, my themes, at first it talks about people with black skin in general, how there’s all these stereotypes against us, like people are seen as lazy. And then it goes into dark skin specifically, about people, how they stigmatize against people with dark skin. Like they think, either they have negative views on them, calling them ugly, there’s a lot of negative nicknames for people with dark skin. Even on TV shows, and actors being cast, they would prefer a light-skinned black person than a dark-skinned black person.

On the inspiration for her piece: It’s about family history and my own identity as a Jew in New York, growing up differently than many of the Upper West Side Ashkenazi Jews that I went to school with. And so it started just as kind of pieces of diary entries that I had been writing about and thinking about as I got older. And I decided it was something that I did want to share with other people, especially people who kind of assumed that I, as a New York Jew, grew up similarly to them, because I grew up in a very different experience.

On her beginnings as a writer and dreams for the future: For as long as I can remember, since I could read, I was like, I want to tell my own stories. And you always remember in third grade when your teacher would be like, that’s a great story. I’ve always felt I wanted to go into publishing. And so being here and feeling like, this is still absolutely what I want to do, is extremely validating. I would love to write novels, I’ve also thought about working as an editor.

On getting ready to submit to the 2020 Creative Writing Awards: Get as much feedback as you can, from everyone, your friends who you trust, your teachers, family members if that’s the sort of thing that they would want to do. I have a twin sister and whenever I write stuff and am using it for a class or some sort of competition, I ask her to read it and at this point she’s like, I don’t want to read another one of your things, it’s so much. Get as much feedback as you can, get different people’s perspectives. And edit, edit, edit. Just keep looking for stuff.

Previous Post: « This YA Novel Is About Female Spies Who Free Women from Trafficking
Next Post: Q&A with Oge Mora: SATURDAY »
Save the date for the #WalterAwards23! You can now