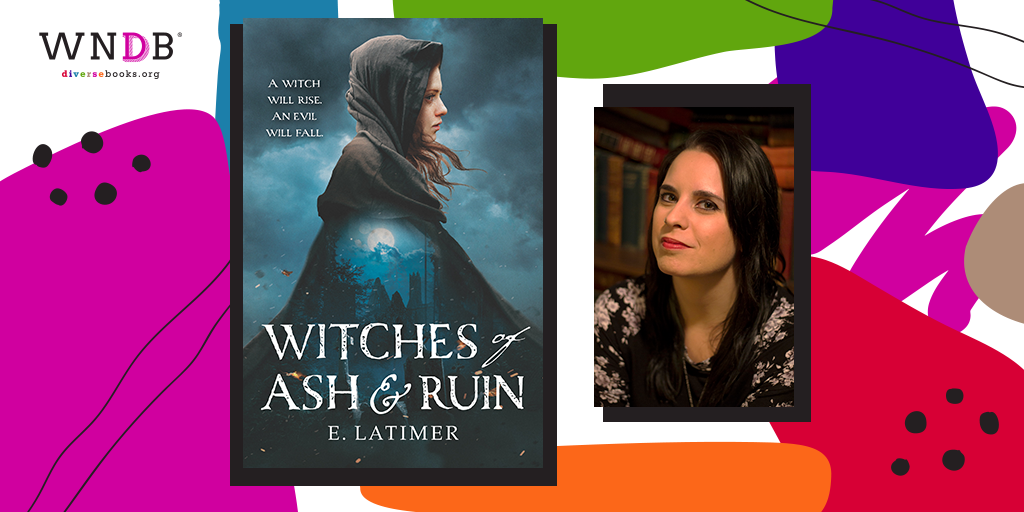 Witches of Ash and Ruin is out now. Order it here!

The first chapter of my life was ruled by the fear of going to hell.

At twelve, I went to a Christian camp. There, one of the leaders stood in front of a room full of children and proceeded to tell a story about how a demon attacked him one night as he lay in his bed.

From that day on, I would lie awake each night, imaging demons appearing in the darkest corners of my ceiling. Unable to sleep and obsessed with this idea, I’d work myself up to full panic attacks multiple times per week.

This fear of demons, and of the hell they might drag me to, did not ease off as I grew older. It merely morphed into something different. Something more specific than the vague imagery of monsters looming out of the dark.

There was a girl.

At thirteen I confessed my sins to my mother.

I will never forget the words she said to me that day, both because they were incredibly hurtful, and because I will be forever grateful that she said them. She told me I was overreacting, and that it was “just a phase”.

After that, we never talked about it again. Of course, it was dismissive. As a bisexual woman, I’ve heard those words too many times to count. But my mother also never told anyone else what I told her that day. No one else ever knew what I’d confessed to. She didn’t tell my father or my siblings. My church never knew. The strict private Christian school I attended had no idea, and the students who would later go on to bully “the gay kid” (who had the misfortune of being noticeably flamboyant in the midst of enemy territory) would never hear a whisper about me, would never know there was another queer kid lurking in their midst.

I would walk those halls, careful never to look too long at a girl, hyper-aware every time I brushed past someone or bumped into them. Afraid that somehow, they would look at me, and they would know.

I realized only later that it could have been much worse if my mother hadn’t dismissed me. One of the girls I went to school with had an older brother who was in “therapy” for being gay. He liked boys, but his family was determined to fix him. As an adult, I still get chills remembering that boy. I only met him once before he graduated. I remember him being sweet and shy, but mostly I remember thinking he looked sad.

It sounds strange now, even to me, but the truth is that I spent most of my high school years terrified of pretty girls. There are instances that have been burned into my mind. A sixteenth birthday party where a girl gifted me watermelon and strawberry lip gloss. We both tried one, and then she declared we should mix them, and I sat there stunned as she kissed me.

At the time, I immediately wanted to do it again, but later that night, I paid for it. I spent the entire night wide awake, terrified and angry. How could I have let it happen? So many nights I would lie awake and scour my own thoughts, making sure none of them were sinful, that none of them would be about girls. And in one fell swoop, one giddy, sweet-sixteen moment, all my hard work had been undone. I could think of nothing but that moment.

This mindset, the terror of hell, and the constant scrutiny of my own thoughts took years to shake. Even after the belief in hell faded, it felt like something in my brain had been permanently programmed for fear. I would have weekly nightmares about being trapped in old, dilapidated houses, pursued by demons. This went on for years until I finally sought out treatment for something that psychologists are now calling RTS, Religious Trauma Syndrome.

My therapist was an older gentleman, with greying hair and a kind smile. He was warm and open, and very intellectual. We discussed my fear of demons, my wavering faith, even the possibility of an afterlife. We talked about anything and everything, so I felt comfortable finally sharing my past terror of going to hell for being queer. One of the first things he suggested was writing it all down. In a journal at first, perhaps, and then later, into my actual work. So I went home, and I did exactly that. I journaled about the demons and the fear of my own sexuality. And slowly, over many long journal entries, my dreams began to change.

I would still start off in that dilapidated, crumbling house. The demons would still start out hunting me. But something had changed. In every dream, I had some form of power. Sometimes, I would turn and cast them out with a sheer force of will. Sometimes, I’d face them down, challenging them. Sometimes I would simply order them to be gone, and they’d disappear.

Discussing my fears with someone, and then later writing them down, helped me begin the process of taking back my mind. It gave me the power to fight back.

The next step in the battle seemed obvious to me, and I decided to try writing about a bisexual girl. In my imagination, she’d deal with a fundamental Christian upbringing, an oppressive church, and a strict father, but at the same time, I’d also give her some form of power. She would be, I decided, a witch.

There’s something about witches and strong women that have always seemed linked for me. The craft can be a hidden power, an internal one, strength from within. And that’s what I wanted for my character, Dayna. That’s why Witches of Ash and Ruin was created.

While I wrote, I delved into past feelings. So many of the fears I grew up with are reflected in Dayna’s story. It played out worse case scenarios, her secret being exposed at school, her father taking it seriously, instead of dismissing it as a phase, being unwelcome at church and prayed for (or prayed at, I should say). I allowed myself to pour all my anxiety about this onto the page, and I was shocked at how much it helped.

Slowly, over time, I was able to accept that part of myself, to embrace it fully. Joyfully, even. To invent more sapphic characters and explore the idea of new types of relationships. At one point, I even told my mother, so now she knows, this is not a phase. 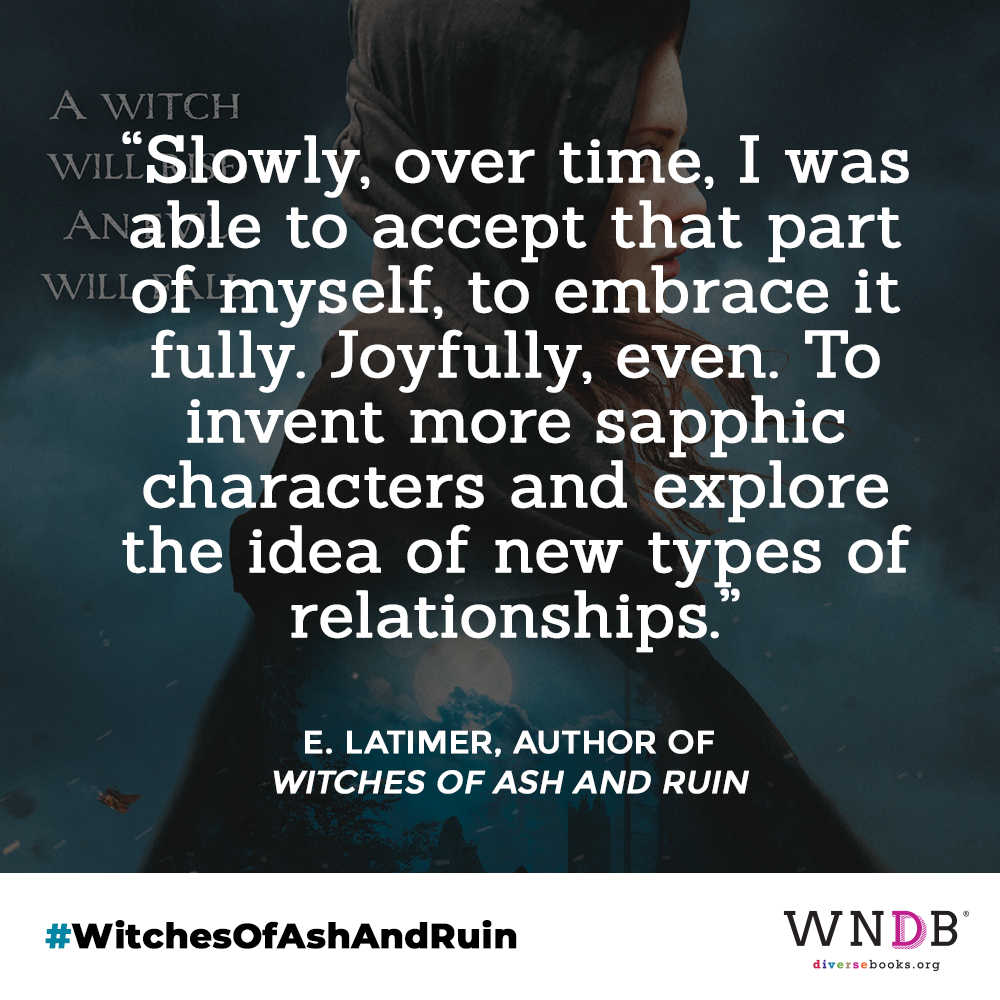 The fear of hell is gone, for the most part. There are still nights I lie awake and track shadows in the corners of my ceiling. But logic prevails now, and I shake off the sleep paralysis and I move on.

Pretty girls are still intimidating, of course. Sometimes I’ll meet someone, and anxiety will strike, but this time, it’s because her smile has tied my tongue in knots and not because I’m picturing a demon bursting through the sidewalk, dragging me to hell by my ankle.

I never thought that writing about witches and serial killers, and blood sacrifice, would be the thing that helped me accept myself. But it turns out, there’s something therapeutic in the art of storytelling.

There was a kind of healing beginning, from the moment I typed out, “Chapter One.” 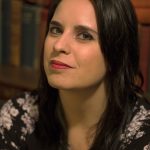 E. Latimer is the author of Witches of Ash and Ruin and The Strange and Deadly Portraits of Bryony Gray. She lives on Vancouver Island, and her breakout success on the online writing platform, Wattpad.com, has resulted in a fanbase of over 100k followers, with more than twenty million combined reads. She also vlogs weekly on the Word Nerds Youtube channel, and spends the rest of her days reading, writing, and consuming too much tea.

Previous Post: « The Importance of Intergenerational Storytelling and Learning Self-Love From Our Elders
Next Post: Q&A With Meg Medina, Merci Suárez Can’t Dance »