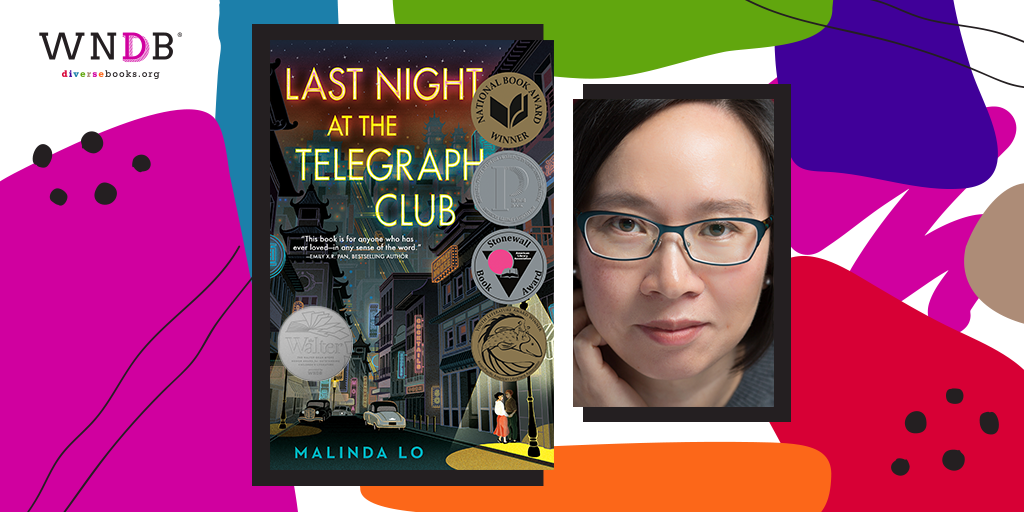 The 2022 Walter Awards & Symposium will be held on Thursday, June 23 at 10:30 AM, both in-person and via livestream. For event details, go here.

Today we’re honored to welcome Malinda Lo to the WNDB blog to discuss Last Night at the Telegraph Club, for which she is a 2022 Walter Honoree in the Teen category.

First of all, welcome to We Need Diverse Books! Could you tell us a bit about yourself?

I’m an Asian American lesbian writer of seven novels (so far, the seventh comes out in October 2022), many short stories, and lots of nonfiction. Before I was a novelist I was an entertainment reporter. Before that, I was a graduate student. I’ve always wanted to be a writer but it took me a long time to believe that I could do it, so I’m very grateful to have my career.

Were there any stories or authors that inspired you as a writer coming into your own creativity?

Madeleine L’Engle, Robin McKinley, and Sarah Waters, among countless others.

Recently you also received the National Book Award for Young People’s Literature for your novel, Last Night at the Telegraph Club (congratulations, by the way!) The inspiration for the book came from your short story “New Year” from the queer anthology All Out: The No-Longer-Secret Stories of Queer Teens throughout the Ages, correct? What inspired the story and what made you decide to expand on that?

Thank you! Yes, the novel originated as a short story, which was inspired by two nonfiction books I’d been reading: Rise of the Rocket Girls by Nathalia Holt and Wide Open Town: A Queer History of San Francisco to 1965 Nan Alamilla Boyd. These two books have nothing to do with each other, but in my mind they came together to inspire the character of Lily, a 17-year-old Chinese American girl living in 1950s San Francisco, who wants to be a rocket scientist and is also starting to realize she’s a lesbian.

My agent suggested that the story could be a novel, and although I didn’t intend at first to turn it into a novel, I soon realized he was right. Lily’s story was much bigger than a short story.

It would seem that quite a lot of historical research has gone into Last Night at the Telegraph Club. How would you describe the research process behind your book and how it intertwined with you writing the actual novel?

I did several months of research before I started writing the novel, but the research never really stopped. I kept doing research while I drafted, through revision, and all the way until it was published. The story informed the research in many ways. For example, when I realized there would be some scenes set during World War II, I focused my research on the very specific situations that would be described in those scenes. But the research also informed the story. I had to know a lot about San Francisco’s Chinese American community in the 1950s in order to understand what Lily’s life would have been like.

As a writer, where did you find your love for storytelling?

I’ve always wanted to be a writer, and I’ve always loved stories—reading them and also telling them. When I was younger, I wrote to entertain myself and to escape. As I’ve gotten older and become a professional writer, I’ve realized that I write to explore questions and ideas that I can’t stop thinking about. With Last Night at the Telegraph Club, I was fascinated by the lesbian community of 1950s San Francisco, partly because I was part of the lesbian community in 2000s San Francisco, but I’m also interested in queer history in general.

I was also drawn to exploring what it would have been like to be a Chinese American in that time period, because my family had sort of the opposite experience of Lily’s family. Her father becomes an American citizen so that their family can stay in the U.S. My grandfather—who was about the same age as Lily’s dad—didn’t become a U.S. citizen and took his family back to China after World War II. So this book was a bit about me exploring what it might have been like if my family had stayed in the U.S.

How would you describe your writing process? What do you do to help yourself as a writer? Any tips to spark or help creativity?

It’s hard to describe a process that changes with every book, but I think one common thread is my commitment to valuing the time I have to write. The more success I have as an author, the more my time is taken over by non-writing tasks, so when I have time to write, I try to really focus on that.

One thing I always do before writing—even before I sat down to answer these questions—is to step away from the internet, especially Twitter. I write on an iPad that doesn’t have the Twitter app installed, so I can’t check it easily. That’s always my number one tip for writers: step away from the internet, particularly social media. Social media, as far as I’m concerned, is the number one way to destroy your creativity. Creativity and writing need silence and space. 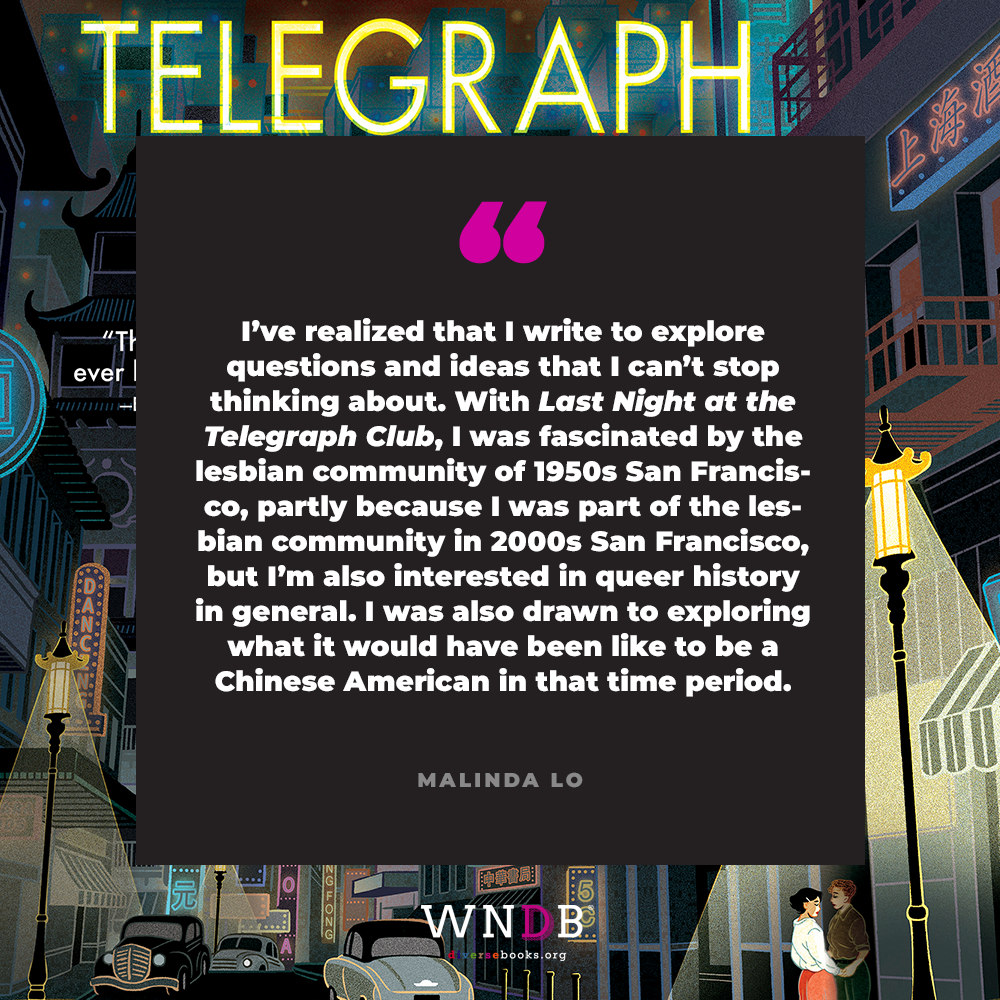 What would you say are some of your favorite craft elements to work on?

I don’t know if this is a craft element, but I love describing places. I can get carried away by this and write so much description of a room or a street or a beach that I have to cut a lot of it later. This is probably because place is very important to me. I want my books to have a definite sense of location, physically. And I love being present in a place, in reality, and feeling what it feels like. Writing allows me to bring that sense of presence to the page.

As someone who has been writing and researching the field of young adult LGBT+ literature, what development have you seen since the beginning of your career? What do you hope to see for the future?

There has obviously been a huge growth in LGBTQ+ young adult fiction, which I’m very happy about and proud to have been part of. In the future (and in the present!) I hope that authors who write LGBTQ+ fiction will be invited to speak more about their craft and artistry as writers, and less about their marginalized identities. I think most novelists become novelists to tell stories about fictional people, not to talk about themselves.

Are there any other projects or ideas you’re sitting on and at liberty to speak about?

My next novel, A Scatter of Light, comes out in October 2022. Set in the San Francisco Bay Area in 2013, it’s a coming-of-age novel about 18-year-old Aria Tang West during the summer between high school and college. Although it’s not a direct sequel to Last Night at the Telegraph Club, it is connected, and readers will learn more about what happened to Lily and Kath. But A Scatter of Light is a very different book; it’s about art, family, a complicated first love, and self-discovery.

What advice might you have to give to other aspiring writers?

First, read a lot—read everything you’re interested in. Just absorb what you love, and then go back to your favorites and try to figure out how the writer did it. And second, don’t give up. So many people want to be writers, but very few stick with it. You need to stick with it in order to make it in this business. Don’t give up!

Do you have any books to recommend for the readers of We Need Diverse Books?

Out right now is Great or Nothing by Joy McCullough, Tess Sharpe, Caroline Richmond, and Jessica Spotswood. It’s a spin on Little Women set during World War II, in which Amy (so many people hate her but I think she’s the best) gets the story line she deserves, and Jo is finally queer. I loved it.

This fall, look out for Nothing Sung and Nothing Spoken by Nita Tyndall, which is set in Germany during World War II. It’s a heartbreaking and bittersweet novel about three queer teens living under the Nazi regime, who find a small bit of freedom by sneaking out to swing dance clubs. And also keep an eye out for The Getaway by Lamar Giles, a page-turning horror/thriller set in a Disneyland-type theme park in a dystopian future that feels way too close to the present. I could not put it down! 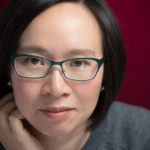 Malinda Lo is the New York Times bestselling author of Last Night at the Telegraph Club, winner of the National Book Award, the Stonewall Book Award, and the Asian/Pacific American Award for Literature, as well as Michael L. Printz and Walter Dean Myers honors. Her debut novel Ash, a Sapphic retelling of Cinderella, was a finalist for the William C. Morris YA Debut Award, the Andre Norton Award for YA Science Fiction and Fantasy, and the Lambda Literary Award. Follow her on Twitter, Instagram, or visit her website at malindalo.com.