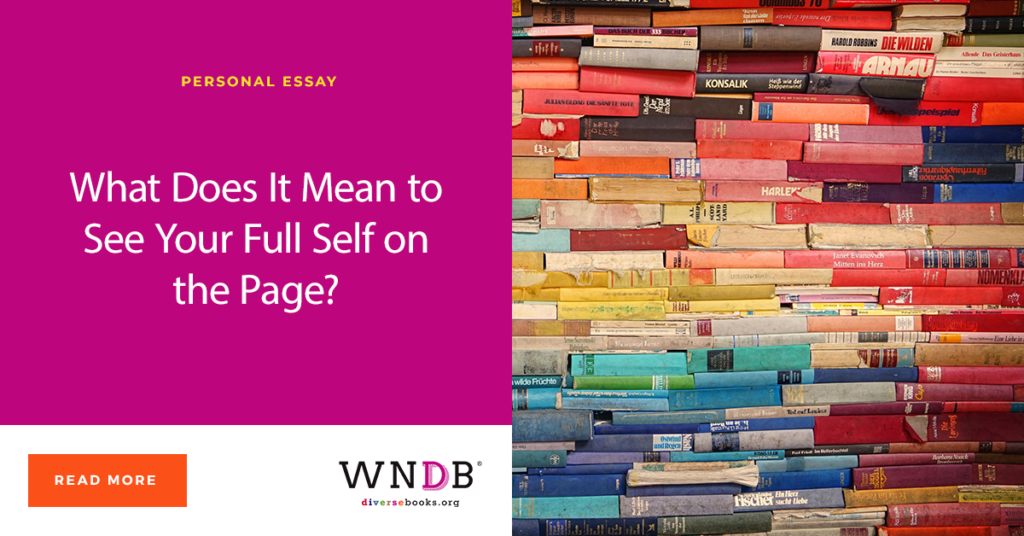 As a child, I loved words. I was adopted when I was two and a half years old from Honduras and I found all things American fascinating, especially the English language. English words stuck to the roof of my mouth like fudge. I chewed them soft and taught them how to form shapes that became words I could pronounce and eventually sentences I could sing.

Words were my compass, map, and North Star.

I devoured them all.

Everything around me inspired words within me.

It was always words.

It took months for me to understand that people don’t live in a television or take naps in between songs and live in a radio. And if they really did, I would never tell anyone; I was a good secret keeper. As my culturalization into America continued, I found out that books existed.

The beautiful language came waltzing in. I was enamored by the sentence structure, the similes and metaphors. But before my love affair with books had a chance to begin, I had to reconcile with the fact that books I had access to were not made for me or by me; they did not reflect a person living at very specific and distinct intersections.

But I loved words too much to give up so quickly.

I devoured every single one of Sharon Creech’s books but focused on the story arc and adventure. I removed myself from each character’s identities because I knew I wouldn’t see myself in them.

I loved Matilda for her quest for knowledge, gentleness and, of course, superpowers.

Ironically, reading anthropomorphic books provided me with a sense of relief. I was relieved I didn’t have to feel the strain of desperately trying to cling to a book that I was not in. I knew I was not a tree, or a bear or a frog. I knew that and I knew I didn’t want to be any of those things.

But I still wanted to see myself in the pages I read.

I wanted to be me.

I wanted to be seen.

I wanted to be important enough that a book was written for me.

In 2018, the Cooperative Children’s Book Center reported that 27 percent of children’s books published that year featured characters who were animals/other, while only 5 percent of the books published featured a Latinx character. A total of 249 about Latinx characters and 197 books written by a Latinx person were published that year. These statistics are overwhelmingly disappointing but not surprising. What I find most troubling is that I have trouble finding statistics that address the intersectionality of a book or its authors(s) and illustrator(s).

As a young person, I began to question my sexuality. I remember having to sneak around the library in search of a lesbian book: Annie on My Mind. I’m pretty sure I stole it. I’m sorry. And so it began again: I had to reimagine who the main characters were, sometimes I would squeeze my eyes so tight that I could feel my tears get trapped behind my eyelids.

It wasn’t until I was a young adult that I discovered queer Latinx authors like Gabby Rivera, Charles Rice-González, and Benjamin Alire Sáenz. They created a new landscape for queer Latinx characters in which readers could authentically see themselves represented. As a Honduran-born transracial adoptee with Cerebral Palsy who identifies as queer, Latinx, and disabled, I was still unable to see myself in their stories.

The Latinx population is the largest minority group in the United States according to the U.S. Census Bureau, but the majority of the books that are being published are not representative of this growing population.

At school, the taunts and microaggressions continued; kids would ask me if I knew my real parents or tell me that my real parents didn’t want me. I was teased for the way I looked. I was outed when I was in elementary school and called slurs. I had people spit gum in my hair. Kids made fun of the way I walked multiple times a day.

I began to internalize the insults, and I began to be so anxious about walking into a room that I made sure I got there first so no one could see how I walked. If I knew there was an assembly and we’d be sitting on the bleachers, I would go there first and walk to the first row and claim my seat.

We see this often with children with disabilities, especially those that have these ‘passable’ disabilities or invisible disabilities. We don’t want our parents to tell anyone and make a bigger deal out of it and bring more attention to us. In a perfect scenario, telling someone could give us the proper accommodations which would help alleviate some of the obstacles we were facing.

But I would rather have students and teachers think I was rude or not paying attention than to tell them I had Cerebral Palsy. Who would I compare myself to? I couldn’t say, I have CP like a kid in this book, or I have CP like your favorite singer.

My life would have been much different if I had seen a young Latinx character with my form of CP. I wouldn’t have grown up in a society that took action to erase authentic narratives of disabled folx on and off the page. I wouldn’t feel like I needed to erase myself out of my own story because I would see myself in books I read and feel validated.

I remember disclosing not too long ago that I had CP to a coworker.  The person responded by asking me if I ever wished I didn’t have it. This question is essentially asking, “If you had the chance to not be you, because you are not enough, would you do it?”

I wasn’t angry at her.

I thought about what books she might have had access to growing up. What if she had access to multiple stories of adventurous, stylish, spunky, smart characters who had Cerebral Palsy, who were also Black, Indigenous, and people of color? 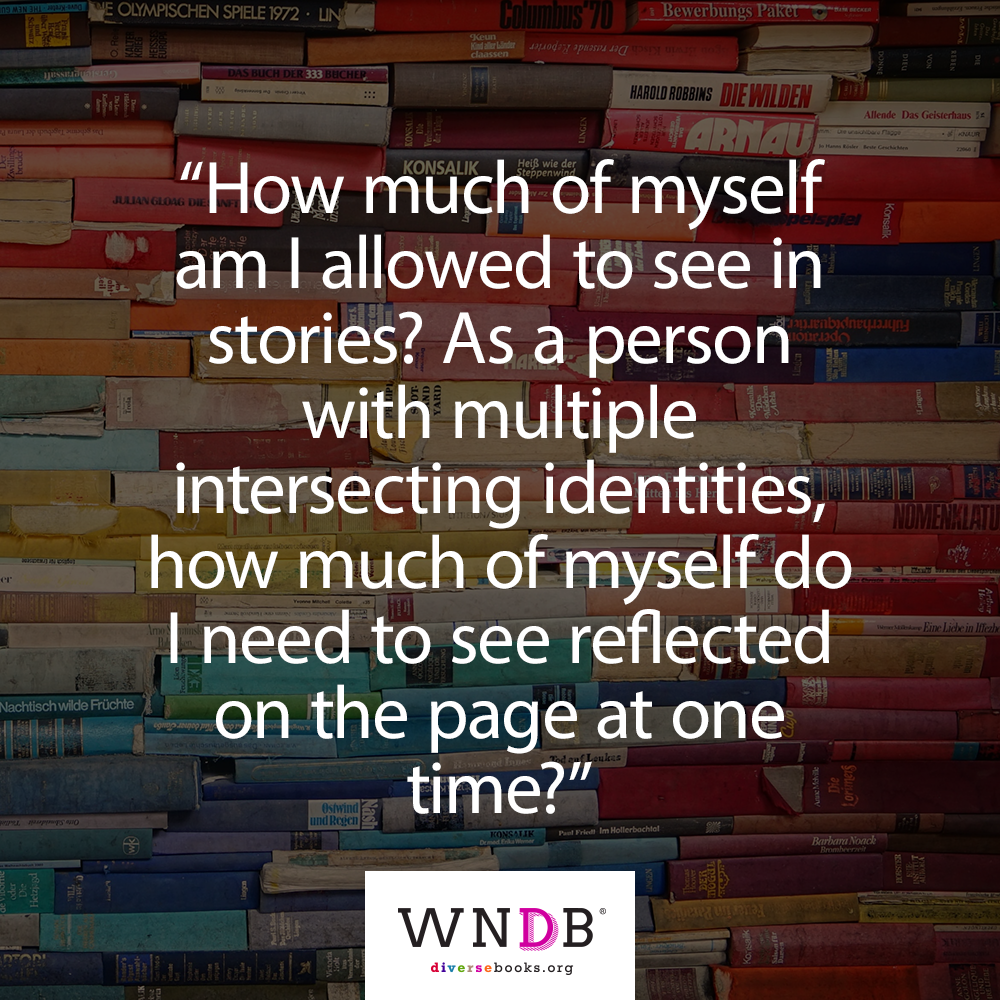 And so the dance continued, as I moved towards a new section of the library and searched for another part of my identity I can see myself in the pages of a book.

I saw myself in fractions, I’m written in decimals, spoken about in question marks. The adoptee stories that are recommended to me are written by a parent and end by the time the child is adopted. Our stories don’t end at adoption. The queer stories are about a young child’s parents. The books on disability usually star a white, classically handsome boy.

The only way I could see myself in books was to imagine an entirely different book. Although I connected with the actions, behaviors, thoughts, and personalities of the characters, they were never a mirror.

I was never really invited into their world.

Many authors say they held books close to their hearts like best friends. Perhaps I’m not as forgiving. I felt as though I gave books my heart and they never loved me back in the same way.

Where does the Latinx adoptee with Cerebral Palsy go when they’re starting to question their gender identity?

In a Book Riot article on disability in YA literature, Kayla Whaley writes, “I know all too well how rare non-harmful representation is, let alone nuanced and resonant portrayals. This is especially true when it comes to intersectionality. Most disabled characters published in YA are white, cishet, and often male. Multiply-marginalized disabled folks have long been erased from the YA world and it’s well past time that changed.”

In addition to knowing that the publishing industry was not designed for consumers like me, I knew there must be millions of kids who were feeling deprived of authentic representation.

Who was going to fight for those stories?

Because I love words.

My words were political. And I told myself that I needed to become someone who was visible for the people who couldn’t be.

I began to write my own stories to exist and hopefully my words would signal other people that they’ve been seen and valued and if they were to decide to write their own stories, I’d be cheering them on.

Children’s media and publishing is an exceptionally powerful force. It has a heavy hand in creating our perception of people, places, and things at a very young age. In order to change the landscape of publishing, it’s imperative to work within. When we have more diverse agents, publishing houses that are diverse in each department, and people are promoted to the point where they can become decision-makers, we’ll start to see more change.

Children’s books are a critical factor in the development of young children; reading helps create our perception of people and validates the experiences of young people. Everyone deserves to see themselves fully in books.

Our multidimensional identities aren’t a monolith. My experience as a Latinx adoptee is not the same as someone adopted at age seven from Colombia. My challenges with a mild form of Spastic Diplegia Cerebral Palsy are different from someone with the same diagnosis.

That’s how beautiful people are.

Our full spectrum of beauty is worth celebrating. 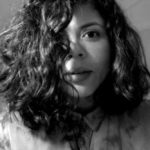 medina (they/them) is a Honduran-born nonbinary adoptee and writer with Cerebral Palsy who lives in Brooklyn. They are an Impact Entrepreneur Fellow and an M.F.A. Creative Writing candidate with a concentration in Writing for Children and Young Adults and Non-Fiction, and a minor in Impact Entrepreneurship at The New School. They were a 2019 WNDB mentee and 2019 SCBWI Emerging Voices winner. They are represented by Marietta Zacker.