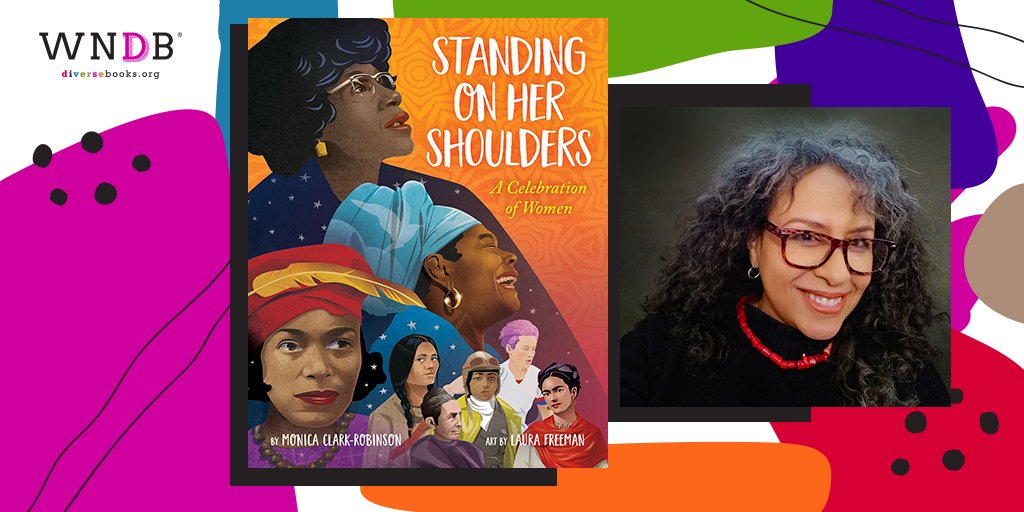 Standing on Her Shoulders by Monica Clark-Robinson, illustrated by Laura Freeman is on sale now. Order it here!

I work on a lot of biographies and I love it. I learn so much about the subject during the process, but illustrating Monica Clark-Robinson’s Standing on Her Shoulders was different. It’s not a biography, more of a beautiful poem that gave me a chance to paint so many heroic women from history, many of whom I knew of but some whom I had never heard of: A wonderful mix of writers, artists, activists, athletes, explorers, and scientists.

I decided to illustrate Standing on Her Shoulders so that it is told through the eyes of a young girl whose mom and grandmother are telling her about women throughout history who have paved the way for us today. I included the little sister in the illustrations to pay homage to my own family. I even snuck a portrait of my sister into one of the illustrations. It’s one of the photos the family is looking at during the beginning of the story. She’s a singer and I have a photo of her singing at a microphone on the table. My mom is in one of the photos too. 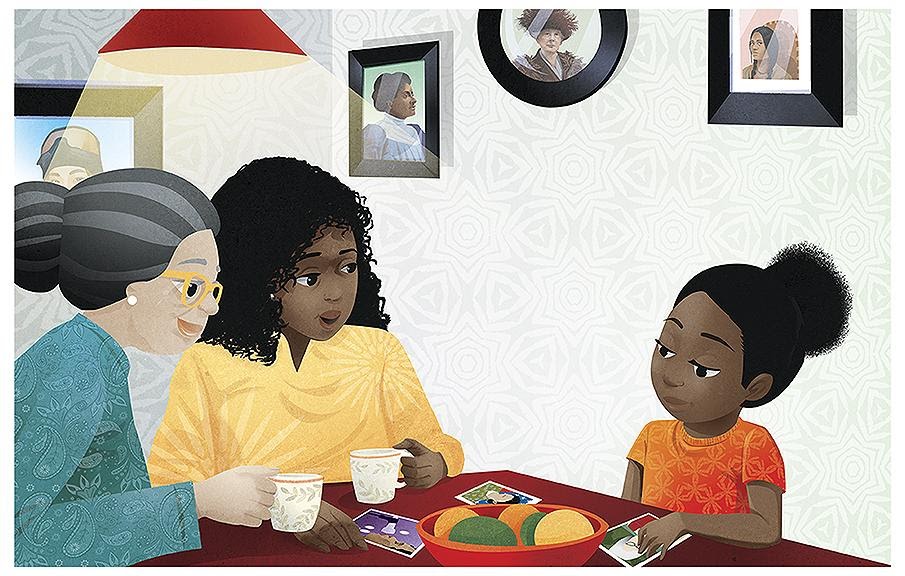 I never got to meet either of my grandmothers. They had both passed away before I was born, but growing up I had plenty of other women to inspire me. My mom spent her days working as a secretary, but she was also an activist, and she had a beautiful singing voice. She was tireless and always encouraged my sister and me. My parents used to send me to visit my aunts in Chicago for the summer. My Aunt Sarah was a milliner and had her own business—a hat shop. She was so fashionable and very fierce. Since my cousin Jacqui was much older than me I used to call her Mom/Cuz. She seemed to be able to overcome anything that life threw at her and it threw a lot! She had overcome childhood polio and she was a three-time cancer survivor who grew up in the Jim Crow South. She also worked as a secretary, first at Howard University and later at her church. In her spare time, she wrote beautiful poetry and designed greeting cards—and she was funny! Her mom, my Aunt Theresa, was a talented seamstress. Although she was taken advantage of and underpaid by the white women in her small town in Alabama, she created the most beautiful dresses. My aunt Julia was a teacher and an artist. All of these women are my role models. All of them still inspire me.

I don’t know how long Monica worked on the text, but the illustrations for Standing on Her Shoulders took almost two years! I started working on the sketches in 2019, but because of staff changes at Scholastic, it had to be put on hold for a while. It went through a lot of iteration but it was worth the wait.

These are some of my earlier (2019) sketches and color studies: 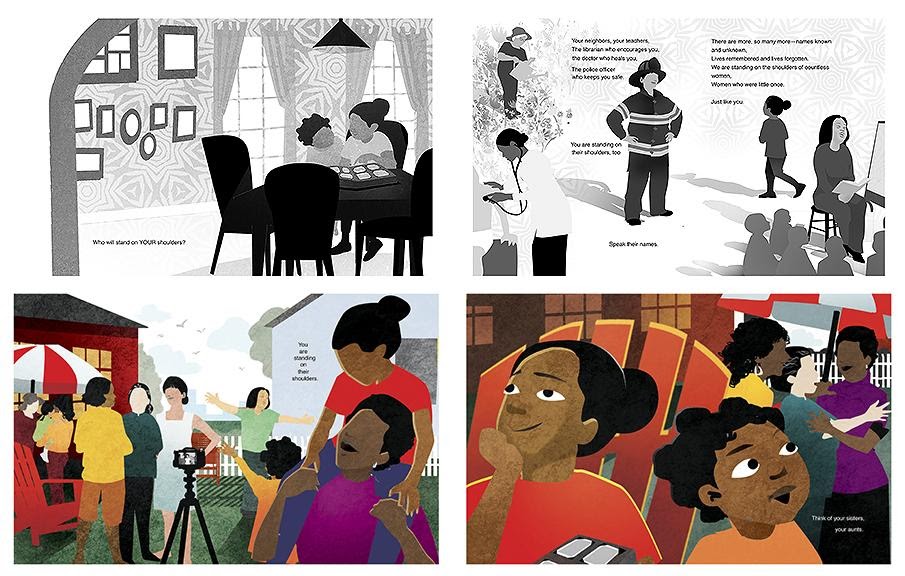 And here are some of my final sketches along with the finished pages: 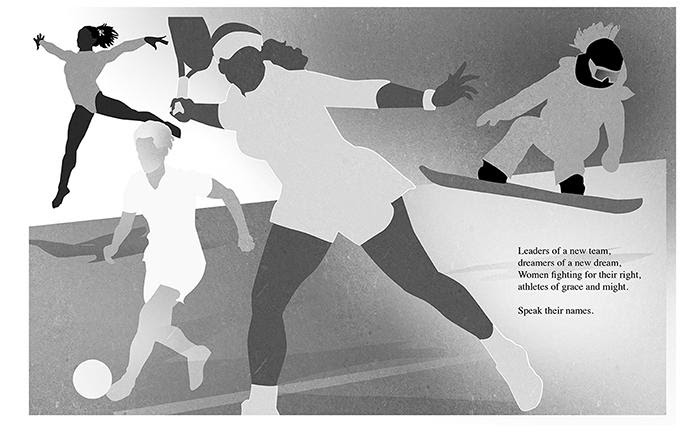 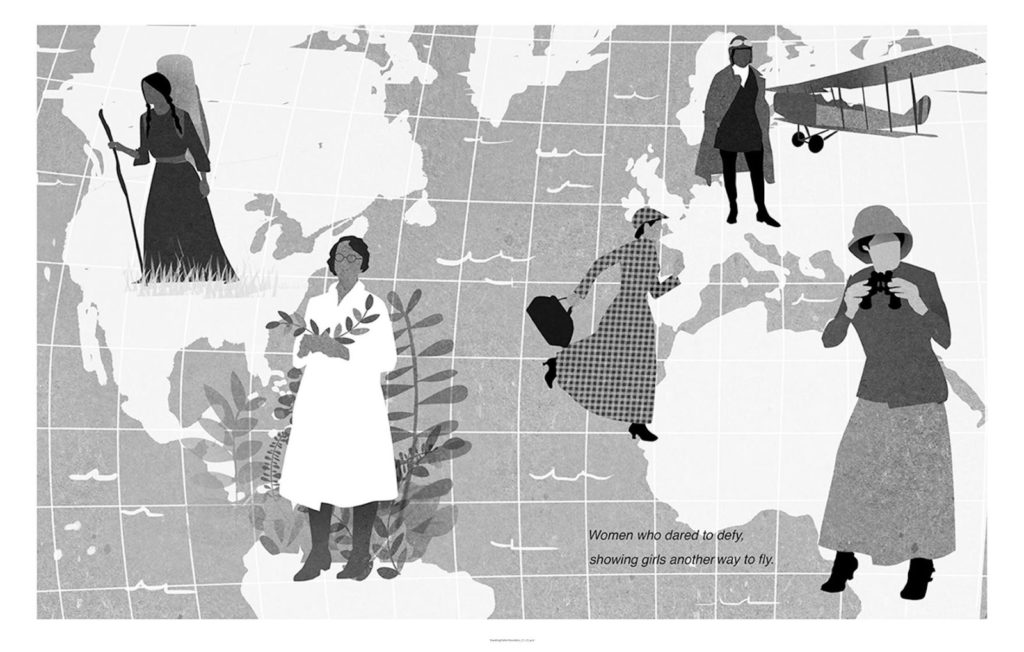 This project was such a long time in the making, and I’m very proud to be a part of such a beautifully written and inspiring book! 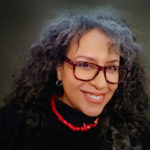 Laura Freeman is a Coretta Scott King Illustrator Honoree. She has illustrated more than 30 books for children, including the New York Times bestseller Hidden Figures by Margot Lee Shetterly. She lives in Atlanta with her husband, two sons, two cats, and a fish.