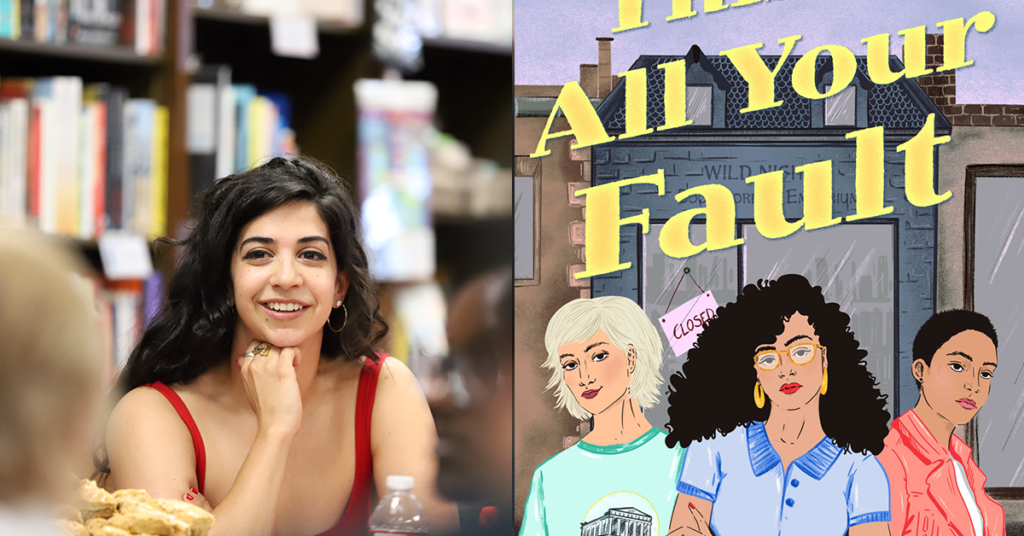 Before she became a writer, Aminah Mae Safi said, she tried to do just about anything else. On the list of potential careers she explored for various amounts of time are museum archivist, gallery PR person, retail worker, and academic; she even spent four days working in marketing in an office job.

“If I could have done anything else, anything but writing, I probably would have,” Safi said. “But as I finished day four at that [marketing] job and came home sobbing, realizing what I’d done was force myself into a job I hated, all for the sake of appearing like the kind of respectable human who could get an office job —I decided to leap.”

Safi emphasized that she had a safety net including a partner with a salary and insurance, which allowed her to take this leap, and added, “Never burn your boats if there’s an outside chance of ruin.”

But burn boats she did, quitting her day job and diving headfirst into writing —giving herself a year to really go after it and work on a manuscript and try to sell it.

Shortly thereafter Safi heard about the first #DVpit, a Twitter event where diverse unagented creators have space within a tweet to pitch their novels, and agents and even editors can give tweets a “like” to signify their interest in knowing more.

Safi is what’s considered a #DVpit “success story,” having snagged the attention of her agent through her pitch.

Since then, she’s published three books and had a short story appear in Fresh Ink, WNDB’s Young Adult anthology. Her third book, This Is All Your Fault, is an October 13, 2020 release and is the whirlwind told-in-one-day story of three girls who work for an independent bookstore and discover it’s closing—unless they can figure out how to save it.

This Is All Your Fault is fresh and funny and heartfelt, beautifully written and filled with emotion, and Safi said she wrote it in part because she “wanted to do something” about all the waves of indie bookstores closing in the face of chains and Amazon and everything along those lines.

“So I told a story about a bookstore that was dying,” Safi said. “About the girls who try to save it. And about the community that independent bookstores have always preserved and fostered and nurtured.”

As this is her third book, Safi has quite some experience writing novels; she explained that this one differed from her first two in part because she had to come at it from a place of structure since it’s told with a condensed storyline and from three points of view.

“I couldn’t leave quite as much room for discovery as I did in the earlier books,” Safi said. “I wanted each girl to get relatively equal air time. I had to balance their individual stories with the overall story. And I had to know where they were at all hours of the day, since what they could see and when they could see it was equally important to the story.”

Of course, despite the structure she had to build into the story, there was still ample room for a surprise from her characters.

Safi said she especially enjoyed writing the formation of the girl gang which is at the heart of the story.

“I had to have each girl in This Is All Your Fault come to the table with a lot of preconceived notions about the other,” she said. “I never realized how much fun that would be to write. To get to jump between each girl and be inside their head and then be next in the mind of the person that was on the other side of the equation.”

She described the experience as “delightful,” clarifying that what was fun wasn’t the judgments and preconceived notions themselves, but the deconstructing of them from chapter to chapter. 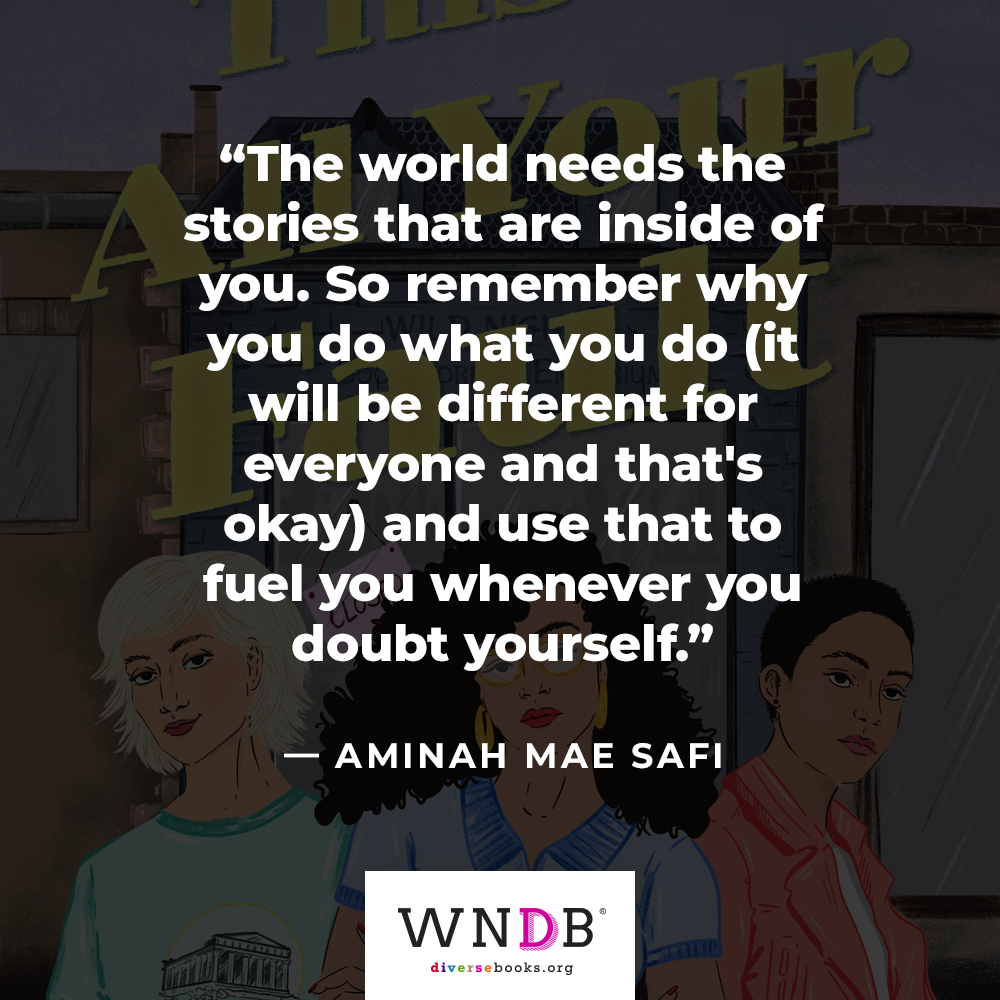 In addition to This Is All Your Fault’s recent release, it has been announced that Safi is going to be part of the Reclaimed Classics series from Feiwel and Friends, a collection of four YA reimaginings of classics including Treasure Island, Little Women, Robin Hood, and Wuthering Heights.

The series will publish throughout 2021 and 2022 and Safi will be writing a new take on Robin Hood from the perspective of a Muslim teen girl during the Third Crusade.

Safi said she was approached by the project’s editor and her “brain just lit up” at the prospect of delving into the story, especially considering much of her master’s research was on the medieval period.

“I loved having the opportunity to pitch this Muslim teen girl as a gallant and chivalrous and clever and charming hero,” Safi said. “I’m the most excited to take people on an adventure. I think we all need an adventure right now—the fun and delightful kind. So constructing a merry band of misfits and getting to take them rollicking through their mishaps as they journey along, that has been the thing keeping me going through all of this.”

Safi describes herself on her website and in her official bios as a big fan of old movies, so of course, I had to ask her about their influence on her writing.

“God, that almost feels like asking how living with oxygen in our atmosphere has informed my experience of being alive,” Safi answered. “I think my love of old movies gave me a sense of respect for the classic forms. The classical comedy. The story beats of an old romance. The lingering tension of film noir.

“There’s also something about old movies where they feel bigger and smaller at once,” she added. “I like that, too. They remind me to tell a story that could last beyond a moment. That there are stories that span generations, in terms of interest. Perhaps that’s always in the back of my mind, too.”

Safi took a moment to give some advice to aspiring authors, especially ones of marginalized backgrounds, saying, “The world needs the stories that are inside of you. So remember why you do what you do (it will be different for everyone and that’s okay) and use that to fuel you whenever you doubt yourself.”

For her, when feeling impostor syndrome, an inspirational thing is reminding herself that Michael Bay doesn’t doubt himself.

This Is All Your Fault by Aminah Mae Safi is out now. Order it here! 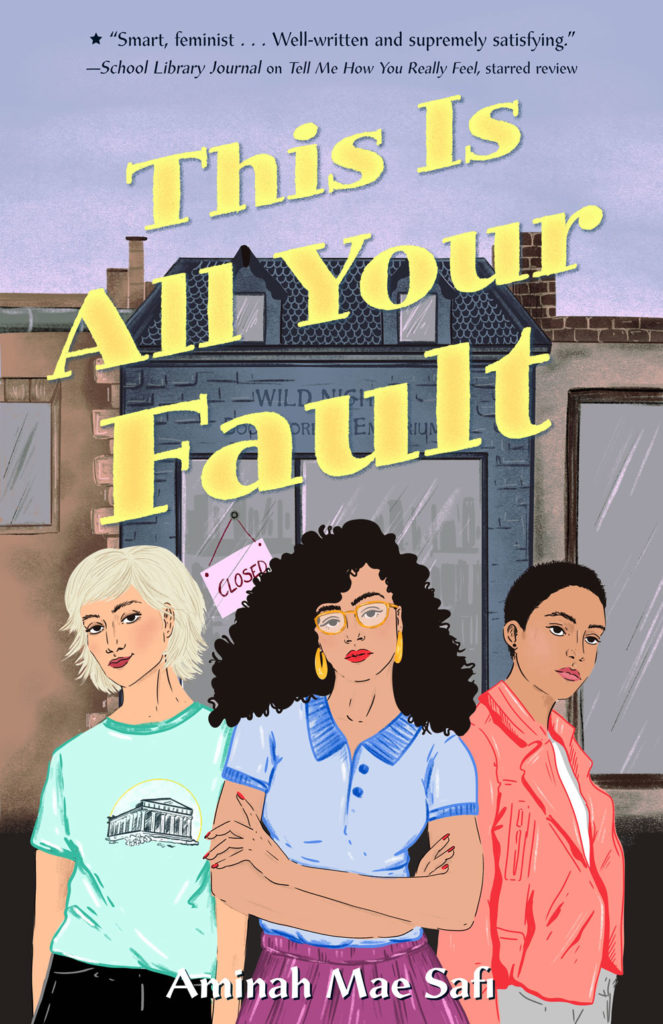 Set over the course of one day, Aminah Mae Safi’s This Is All Your Fault is a smart and voice-driven YA novel that follows three young women determined to save their indie bookstore.

Rinn Olivera is finally going to tell her longtime crush AJ that she’s in love with him.

Daniella Korres writes poetry for her own account, but nobody knows it’s her.

Imogen Azar is just trying to make it through the day.

When Rinn, Daniella, and Imogen clock into work at Wild Nights Bookstore on the first day of summer, they’re expecting the hours to drift by the way they always do. Instead, they have to deal with the news that the bookstore is closing. Before the day is out, there’ll be shaved heads, a diva author, and a very large shipment of Air Jordans to contend with.

And it will take all three of them working together if they have any chance to save Wild Nights Bookstore.

Previous Post: « WNDB Fall Book Club: Natalia Sylvester on the Power of the Vote
Next Post: The Rise of Gender-Inclusive Pronouns and Language in Literature »
Applications are open for Literary Agents of Chang