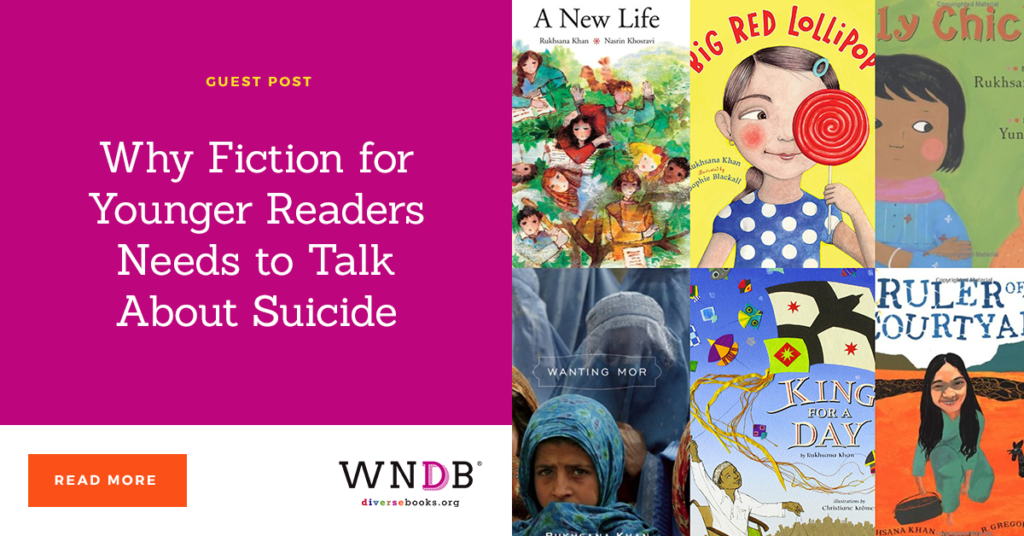 When I was eleven, I nearly committed suicide.

I’d said something so silly during sex ed. class, I thought my life was over. I remember it vividly.

Standing in the kitchen with my older sister Bushra, with the knife pressed against my stomach so that it made a dent in the striped fabric of the turtleneck I was wearing. A little further and it would have drawn blood. My sister said, “If you’re going to do it, do it now. Technically you’re still a child. You’re not accountable and you’ll go straight to heaven.” Then she said she wished she’d done it at my age.

When I hesitated, she leaned forward. “You’re still a child. You don’t know right from wrong. It’s only going to get worse. You can be in heaven in a few minutes. You won’t be accountable, I promise.”

I looked down at the blade in my hands and thought, “No, I do know this is wrong. Maybe I am accountable.”

So I put the knife back in the drawer. Between my father’s abuse and racism at school, I had a lot of reasons to end my life. But I also had my faith and I was a reader. I guess I found enough respite in the books I read that I wasn’t ready to give up yet.

That is the power of children’s literature. It can give a desperate child a break from their problems.

By the time I got my period, and was, according to my faith (and biology) an adult, I accepted that the option of suicide was over. As Bushra had predicted, my life only got worse. When your family is the only Pakistani Muslim family in the whole town and you’re often the only brown kid in the class, you’re probably going to get bullied. When I did something stupid everyone remembered and they never let me forget.

By the time I was thirteen, I was entering a middle school where I had no friends, only enemies and I was trying desperately to join the popular clique even though John and Rick, the boys who ran it, spent much of their time planning ways to humiliate me.

I prayed for death, but then I learned you’re not supposed to do that, so I prayed for relief, but in my mind the two were synonymous. Even though I wasn’t the only one John and Rick humiliated, I was sure I had it the worst.

After I turned the tables and humiliated John and Rick they started tormenting a girl named Betty. They called her ‘Betty Big Boobs’ when she wasn’t around. I never called her that. I never dealt with Betty at all. I thought she was a loser and would only bring me down.

When Betty didn’t come to school one day and the rumor went around that she’d tried to kill herself, I felt incredibly guilty. When John and Rick said those things about her, I hadn’t spoken out so I felt complicit. To assuage my conscience, I vowed that when Betty came back I’d be her friend. I’d help her through this.

When our teacher was called to the office, Rick stood up and announced, “It has come to our attention that our dear Betty has tried to end it all. We will now have a two-minute silence for our dear Betty.”

Then John and Rick and the popular kids started snickering and giggling through their own two-minute silence. I couldn’t believe they could be that cruel. Why didn’t someone say something?

All the other class losers just sat there, hunched over, looking sideways. Not one person said anything for Betty. This was a turning point in my life.

I glared at the kids I’d been trying to impress and thought, “I don’t want to be your friends anymore. I don’t even want you to like me because if you like me then maybe I’m like you in some way and I don’t want to be like you. You go your way, I’ll go mine.”

And I thought, “Just wait till Betty comes back! I’ll make it up to her. I’ll be her friend.”

Betty never did come back.

I ended up going to a different high school. I never saw those horrible people again and for years it bothered me that I hadn’t spoken up.

I often write as a result of things that ‘bother’ me. Years later, I wrote my first novel in which my protagonist gets to the moment when the popular kids are having this two-minute silence, only she has the strength I did not. She has the strength to speak out. It became the climactic scene in Dahling, if You Luv Me Would You Please, Please Smile.

It was a #MeToo story, published decades before the #MeToo movement became a phenomenon. And because I’m an oral storyteller, I’ve been sharing this anecdote with middle school kids for twenty years. A funny thing always happens.

The same kids who might have laughed when I said ‘Betty Big Boobs’ become very quiet when I get to the suicide attempt. Rich school, poor school, it doesn’t matter. When I start talking about suicide there are always kids who look nervously around to see if anyone is staring at them. It used to be just one or two kids, nowadays, there are a lot more of them. My native Canada has the fifth highest child suicide rate in the world. And last year in America CNN reported that from 2007 to 2015 the number of kids visiting emergency rooms for attempting suicide doubled. Suicide has become a leading cause of death for kids.

Unfortunately, things are probably going to get worse. Since the pandemic, incidents of domestic violence have surged. With economists predicting a global depression like the Great Depression, the pressure on families will increase dramatically. Poverty begets hunger, hunger begets humiliation, humiliation begets anger, anger begets beating, it’s a vicious cycle.

We need to start dealing with it. We shouldn’t be turning suicide into a mystery the way other popular media for teenagers has done. Instead, we need to address their reality responsibly so kids realize they have other options.

All those books where the protagonist reconciles with their bullies didn’t reflect my reality. Sometimes there is no path to reconciliation. There’s only hanging in there until you can escape.

According to the psychiatrist I consulted with, talking to children about suicide doesn’t increase the likelihood of a child committing it. In fact, portraying characters with suicidal thoughts who do not go on to die of suicide is beneficial.

It’s why my newest project is a graphic memoir that deals with why I decided not to. I’ve been told it’s too intense, too graphic. For whom? I wonder. It’s an accurate portrayal of my eleven-year-old reality. Maybe it would have been more marketable if I’d been a bit older when I was suicidal, but that’s not what happened.

There are many ways that diverse voices get censored by the establishment. Despite all the strides we’ve made through initiatives like We Need Diverse Books, it feels like the deck is still stacked against the marginalized telling important stories. It feels like you need to be a popular white author to pull off a controversial topic like mental health.

I realize now that I never wanted to kill myself.  I wanted what every child wants. I wanted relief. I wanted someone to show me that there is a way through. In my graphic memoir, there is no reconciliation with the cool kids. There is no bystander waiting to be my white savior. There’s only me figuring out how to become someone I could stand up for and eventually finding true friends, people who ‘got’ me.

If my story can stop even one child from suicide, then I will have succeeded. And if this sounds like a brazen pitch, that’s because it is. We need publishers with the vision to tackle to address this gap in children’s books. 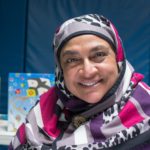 Rukhsana Khan is an award-winning author and storyteller. She was born in Lahore, Pakistan, and immigrated to Canada at the age of three. Growing up, she was ruthlessly bullied so she turned to books in order to cope. When a grade eight teacher told her she was a writer, she thought the idea was crazy. Writers were white people from England and America. To be ‘sensible’ she became a biological-chemical technician. When she couldn’t get a decent job she decided to be ‘unsensible’ and become a writer. It took eight years to get her first book published. Now she has thirteen books published (one of which was chosen by the New York Public Library as one of the 100 greatest children’s books in the last 100 years). She’s been featured on television, radio and at conferences and festivals around the world. She lives in Toronto with her husband and family.

Previous Post: « Black Girl Magic in the Dark: Accessing Inner Healing Through Personal Grief
Next Post: Q&A With Authors Katherine Locke and Laura Silverman »
Save the date for the #WalterAwards23! You can now