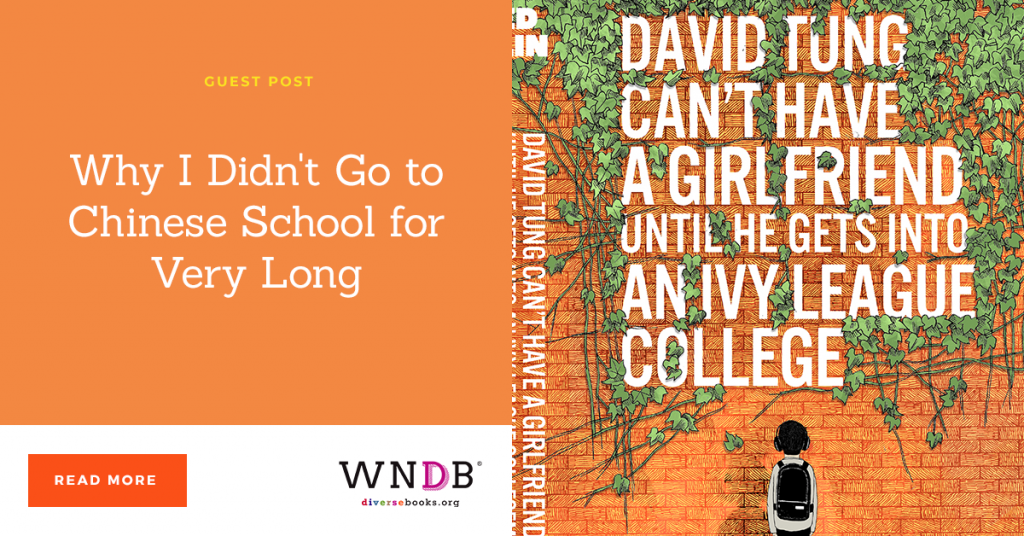 I wasn’t marked for greatness in the program, anyway. They separated us into two groups. One was for the kids like my sister who were willing to learn on Saturday mornings. I was on the dumb track, for kids who refused to be broken by the four resolute tones of Mandarin, and death-by-repetition writing of characters.

On the plus side of being on the dumb track, my teachers were nicer and demanded less. More singing, less work. The policy of containment rather than advancement ruled us.

In any case, I didn’t want to go. Who would want to put on shoes and leave the house when the Saturday cartoons were just hitting their stride? But I didn’t have a choice. My mother was the equivalent of the principal of the Chinese school, which was held in a church. Chinese school was the only church she attended regularly. My ass was going to be there, dumb track or not. Why, what would people think if only one of the principal’s kids showed up? And surely what other Chinese people thought about our family was more important than how I actually felt, me being a mere first grader who needed to shut up.

This was central New Jersey, in the 1970s. When I look up the town population on Wikipedia and see that as of 2000 it was only 5 percent Asian, I am amazed. It had to be a lot less than that when I was there, but I remember having at least one of my Chinese school classmates in every class at regular school. And Chinese school itself seemed to include at least 100 people, including adults and kids, of Chinese descent. Everybody in the town who ate with chopsticks had to have been there!

Well, plus one. There was a white boy in my class. He wasn’t even half. He was whiter than a bottle of Elmer’s Glue, and we stuck together. We were friends. They had to give him a Chinese name, and when he spoke Mandarin, I remember being so relieved that I wasn’t the absolute worst student in my class.

Each track had a few different classes, grouped by age. My earliest memories of Chinese school are of entering a classroom and listening for a little bit before a group of us would run out the door. We’d chase each other up and down the church stairwells. The white boy never did. He was a good kid. I mean, hell, his parents were probably charged extra to send him to Chinese school, after all.

We usually didn’t run around too long, but one time the song man Mr. Liu, accordion still strapped to his chest, came after us and yelled that we had to go back to class. We slinked back into the classroom. We knew that Mr. Liu was divorced, and therefore there was something wrong with him, so we didn’t want to make him mad.

I settled down when I reached second grade in regular school because I won a magic-trick set at a Chinese party. It was the first time something good happened to me at Chinese school. One of the tricks was making a quarter disappear under a clear plastic cup, and I got to be pretty good at it.

My performance skills came in handy for the skits we performed in school. Yes, even my lowly group was expected to put on shows for the rest of the school. Somehow, our teacher’s daughter was always given the central role in everything we did. This girl was the loudest person in rehearsal, but whenever we were on stage in front of people, she could barely squeak. Yet her casting streak of landing plumb roles continued.

The shows required extra work, so we had to meet up outside of Chinese school. My teacher had a really mean German shepherd that she kept locked in the basement when we met at her house on weeknights.

One time, though, we were meeting on a Sunday afternoon, and I entered her house through the front door like I always did, but no one was around. I walked all the way to the back and I saw through the glass patio door that everyone was gathered in the backyard. I waved to my teacher, and the next thing I knew, I was on the ground. The German shepherd had taken me down.

I think all the kids and my teacher must have been traumatized to see the attack. She drove me to the emergency room and I remember a woman carefully sterilizing my wounded arm, telling me that I was a brave boy because I didn’t cry out. Oh, I felt the pain. Treating my wound hurt worse than the dog bite itself, but I might have been in shock, I think. At least one of the shepherd’s teeth broke the skin and put a hole in my arm. I have a keloid there now.

After that, Chinese school became even better. My teacher would give the class some assignment, and then take me out to Carvel for a soft-serve cone or a sundae in a plastic football helmet. One time she saw me walking home from regular school, and we went to Carvel to get a six-pack of Flying Saucers.

The good times didn’t last. Halfway through third grade, we moved to another part of Jersey, closer to the shore, and began to operate a beat-up motel. The trajectory of my life changed forever, and my sister and I didn’t go to a new Chinese school because there weren’t enough of us around to have one nearby.

As an adult, I now know that a certain political faction sponsored the Chinese school I had attended. We used to see propaganda films about how the evil Communist regime was going to collapse any day.

I’m sure that the various Chinese schools across the country now have their own agendas and dogmas to follow. There are even schools that teach Cantonese, and not Mandarin, which is typically the dialect of rigorous instruction.

My grasp of Mandarin now is slippery enough to cure sore throats. Chinese school hadn’t helped, and two language classes I took as an adult were slightly beneath my abilities, but above my flagging ambition.

Now, when I get one of those robocalls in Mandarin, I can understand that something needs to be taken care of quickly—something regarding money—but I don’t know exactly what.

David Tung Can’t Have a Girlfriend Until He Gets Into an Ivy League College by Ed Lin is on sale on September 22, 2020. Order the book here! 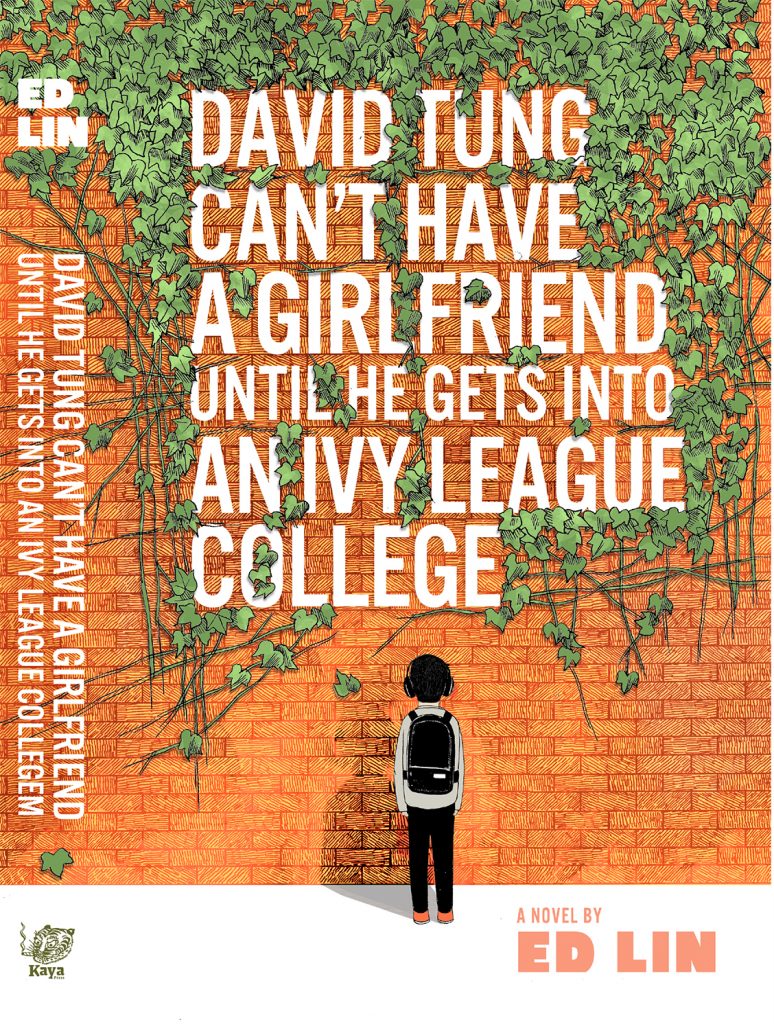 “You’re not allowed to have a girlfriend until college,” my mother warned. “And you’d better get into an Ivy League school!”

In David Tung Can’t Have a Girlfriend Until He Gets Into an Ivy League College, novelist Ed Lin conjures up “a fast-paced, acid-tongued, hilarious teen drama for our age,” says Marie Myung-Ok Lee, acclaimed author of Somebody’s Daughter and Finding My Voice. Both playful and wryly observant, Ed Lin’s YA-debut explores coming-of-age in the Asian diaspora while navigating relationships through race, class, and young love. David Tung, our nerd-hero, is a Chinese American high-school student who works in his family’s restaurant, competes for top grades at his regular high school located in an upscale, Asian-majority New Jersey suburb, and attends weekend Chinese school in NYC’s working-class Chinatown. While David faces parental pressures to get As and conform to cultural norms and expectations, he’s caught up in the complicated world of high school love triangles—and amid these external pressures is the fear he will die alone, whether he gets into Harvard or not! 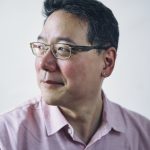 Ed Lin, a native New Yorker of Taiwanese and Chinese descent, is the first author to win three Asian American Literary Awards and is an all-around standup kinda guy. His books include Waylaid, a mystery trilogy set in New York’s Chinatown in the 70s (This Is a Bust, Snakes Can’t Run, and One Red Bastard), and a mystery series set in Taipei (Ghost Month, Incensed, and 99 Ways to Die). His latest, the YA novel David Tung Can’t Have a Girlfriend Until He Gets Into an Ivy League College, will be published by Kaya Press in Fall 2020. Lin lives in Brooklyn with his wife, actress Cindy Cheung, and son.

Previous Post: « Making a Joyful Noise Through Writing
Next Post: Q&A With Bassem Youssef and Catherine Daly, The Magical Reality of Nadia »
Applications are open for Literary Agents of Chang