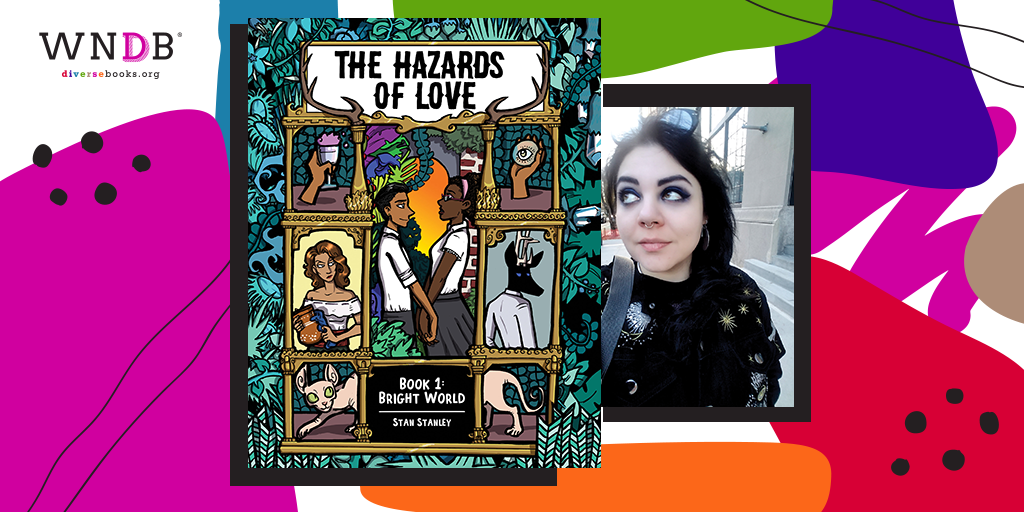 The Hazards of Love Vol. 1 by Stan Stanley is on sale now. Order it here!

“So I wrote a comic where everyone is both queer and Latinx,” I say, and somewhere on the social media plains, a Concerned User’s head pops up.

They scent the air. Ah, yes.

The time to play devil’s advocate has arrived.

It’s painfully predictable. They start throwing out these marginalized combos like they’re going for a KO in a video game. “The SJWs won’t stop until there’s a story about a bisexual Puerto Rican who converted to Islam and is struggling with chronic health issues.” And the thing is, that’s a real person I know. He likes werewolves, he’s lovely, and you know what? He’d make a compelling main character.

“Well, what next, a trans Afrolatinx dating a fat nonbinary Latinx and they move out to the country to live with their chosen queer family?” Yeah, buddy, one Halloween they dressed up as Morticia and Gomez. It was cute as heck; a series about their adventures would be hilarious and wholesome.

The thing is that the people in these combinations actually exist. I have a bunch of them in The Hazards of Love, and when creating the characters, I was reflecting facets of people I know. Writers aren’t going down some checklist to create the most unique combination of marginalized identities like we’re searching for an undiscovered prime number. There’s no prize here.

So why is adding intersecting diversities important? Kimberlé Crenshaw’s original use of ‘intersectionality’ referred to the overlap of identities: People with different backgrounds have had different experiences. Think of a Venn diagram: The spaces where two circles are laid over each other contain features of both the original circles. (I like Venn diagrams as analogs to intersectionality, mostly because as you add more circles, the diagram gets more and more complex; this describes the human experience perfectly.)

Let’s put it another way: People are complicated. In The Hazards of Love, I used the mosaic method to incorporate aspects of my lived experiences. How do you make a mosaic? Take a vase. Smash it. Use the pieces to create your picture. No one should be able to see the vase instead of the mosaic, but the pieces of the mosaic still came from your life and your experiences.

Here’s a vase: I’m a queer lady who grew up in northern Mexico but hasn’t been back in the decade since I moved to NYC, and I feel some kind of way about that. I’m a former scientist, currently a cartoonist, and I love horror but am a giant weenie. I’m surrounded by a lovely community of queer folks from a bit of everywhere and I collect bones and teeth.

The Hazards of Love is a comic about Amparo (a nonbinary Latinx teen) who gets sucked into a surreal fantasy world and is desperately trying to get back home to Queens and avoid dying or being tricked into selling their memories. Meanwhile, in Queens, Amparo’s high school crush Iolanthe (a queer Afrolatina) realizes something is off and starts investigating. The friends she enlists are Latinx and all queer, and the friends Amparo meets are Latinx and queer, too; the story isn’t about that, but it’s not a hidden fact or hard to discover, the way it isn’t hard to discover when you’re among friends who share a background with you.

Here’s the cool thing about it: ‘Queer’ and ‘Latinx’ are both terms that contain so much that it’s possible to have characters with wildly different experiences with the same identity. When you pick apart ‘queer,’ it contains everything from ‘asexual’ to ‘transgender.’ There’s the joke about how the alphabet soup acronym (LGBTQIA+) keeps picking up letters—nothing wrong with that. More ways for people to identify means someone might look at a term and feel less lonely in the world. Love that. I’d take an entire 26-letter acronym if it meant queer kids didn’t grow up hating themselves. Latinx people are not a monolith, either; the term covers a wide variety of racial backgrounds and heritage, with different backgrounds and different experiences grappling with the effects of colonialism.

Even with the conscious choice to have an all-queer, all-Latinx cast, you end up with so many stories to choose from that you can avoid the pitfall of a single character having to carry the burden of representing an entire marginalized community. We’ve all seen this play out in old cartoons and tv shows—a show full of male action stars gets to have one woman (always white). If it’s an all-female cast, there’s the blonde white main character, one Black lady, one white lady with non-blonde hair, and one chosen model minority, either an Asian woman with fair skin and pin-straight hair or a Latina woman with wavy brown hair and a light tan. The message was clear: You only get one. 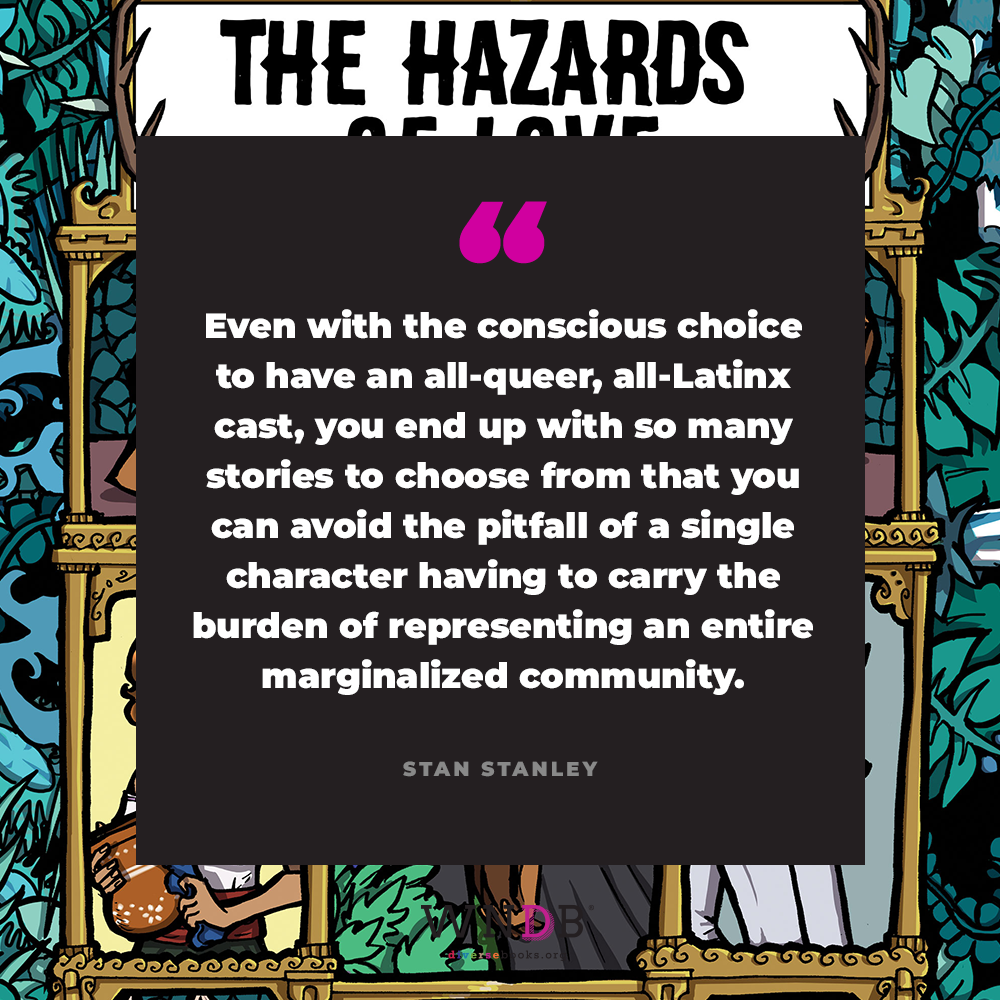 Still, why go so far as to have a cast that is entirely queer and Latinx in The Hazards of Love.

Why the heck not?

No, really. Media gets away with having an all-straight, all-white cast without someone raising their hand and asking, “Why are you all straight and white?” You can create characters who have different experiences with similar cultural commonalities, and it creates richness and nuance. It gives writers more breathing room. It creates a better story.

So forget that “you only get one” thing. I’m feeling greedy.

Am I worried this will alienate some readers? No. I mean, it will, but I’m not worried. Let’s pick this question apart. What’s it really saying? That white, straight people can’t read a story unless there’s a white, straight person prominently featured in it for them to relate to? (Studio executives are, in fact, fond of frequently saying that.) That’s so cynical. Look, at the end of the day, my writing is for the person who reads the story summary and goes, “Finally, someone like me is in this one.”

Other people can read it, too, though. 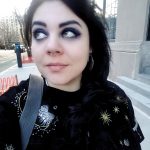 Stan Stanley makes comics that are sometimes creepy, sometimes funny, but always queer. She’s been making comics since she was in high school and has continued doing so throughout various science-related careers when she was supposed to be doing science. Instead, she created Friendly Hostility, The Hazards of Love, and her online journal comic, Stananigans. The Hazards of Love is heavily influenced by the ephemera of the Mexico in which Stan grew up, though she now finds herself in NYC among a lovely crew of weirdos. She lives with her spouse, a large cat, and a larger collection of bones.

Previous Post: « Q&A With Wendy Heard, She’s Too Pretty to Burn
Next Post: Marginalized People Are Taught to Be Embarrassed by Our Mothers »