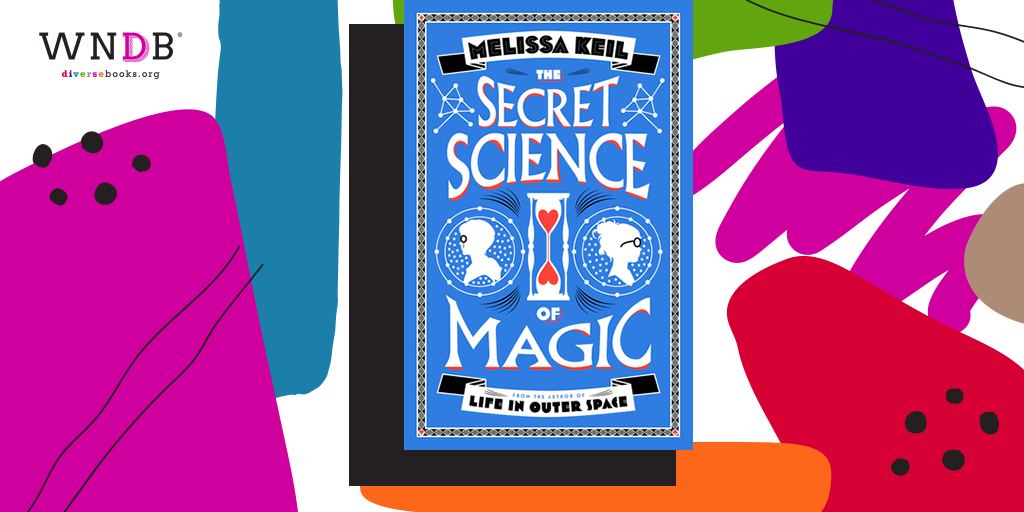 The first time I attended BookExpo (formerly BookExpo America) in 2017, a random man looked at my badge and asked me, “What is Sri Lanka? Is it part of India?”

I wish I gave him a smart response, but I don’t even remember what I said to him now. That was my first trip to the US and I didn’t know that in the following years, I would be constantly explaining the legitimacy of my little island country to every person who seemed confused that I am not Indian and that Sri Lanka is not part of India.

That same BEA, I was standing by the Simon and Schuster booth with some of my friends chatting with a publicist who I didn’t know, and when the conversation fell to the recently published When Dimple Met Rishi, she looked me directly in the eye and said, “Well I am sure you must be very excited about this one!”

And I was. I still am. When Dimple Met Rishi is probably one of the first big books that featured two South Asian kids being themselves, having fun, and being so happy in love, and it meant the world to me, and I did nod vigorously at that publicist. In 2017, I was not Sri Lankan and Dimple was not Indian. We were both South Asian, and I valued our shared experiences and our similarities, and that was enough for me.

But it is not enough anymore.

South Asian YA books often take on a template that is more palatable to the white reader, choosing to focus on what is familiar to the Western audience. Sayantani Dasgupta, author of The Serpent’s Secret, calls this the “chai-latte-fication of South Asian identities.” While the South Asian region is rich and diverse with a myriad of ethnicities, religions, languages, cultures, mythology, food, and clothes, mainstream YA has primarily set its boundaries around Bollywood movies, samosas, sarees, and chai.

It is not a curious phenomenon that the Indian and Indian American stories dominate South Asian YA since that’s the most recognizable narrative for a Western—and global—audience. It is not that these stories are not important, and I don’t want to discredit the significance of these narratives or the success of Indian/Indian American authors. But this monopolization effectively erases the other South Asian countries, including narratives that are very unique, yet often intertwined because of our histories of colonization, border disputes, and shared culture.

South Asia consists of eight countries—Afghanistan, Bangladesh, Bhutan, India, Maldives, Nepal, Sri Lanka, and Pakistan. Where are these stories? Where are our authors? Why do we still have to compensate by reading only Indian narratives as our taste of South Asian representation that is “close enough”? Dash, an avid YA fantasy reader tells We Need Diverse Books,  “I’ve become so accustomed to accepting that the South Asian is from India that I no longer know what to expect as a Sri Lankan reading YA.”

Of course, there have been some brilliant non-Indian South Asian stories in recent years. Aisha Saeed has given us sensitive, strong Pakistani heroines with Written in the Stars and Yes No Maybe So. Bangladeshi authors like Sabina Khan (The Love and Lies of Rukhsana Ali), Adiba Jaigirdar (Henna Wars), and Tashie Bhuiyan (Counting Down With You – May 2021) have paved a path for progress. Last year’s The Light at the Bottom of the World by London Shah features an Afghani teen getting control of her own narrative.

But some of us don’t even have that. I have yet to read a YA or children’s book that features a Nepali, Bhutanese, or Maldivian character. The one Sri Lankan protagonist I have read about is from Melissa Keil’s The Secret Science of Magic, yet the character’s identity was never mentioned in the blurb or marketing materials, and I never see this book being claimed as South Asian YA in any lists or publishing circles even though it is written by a Sri Lankan author herself. 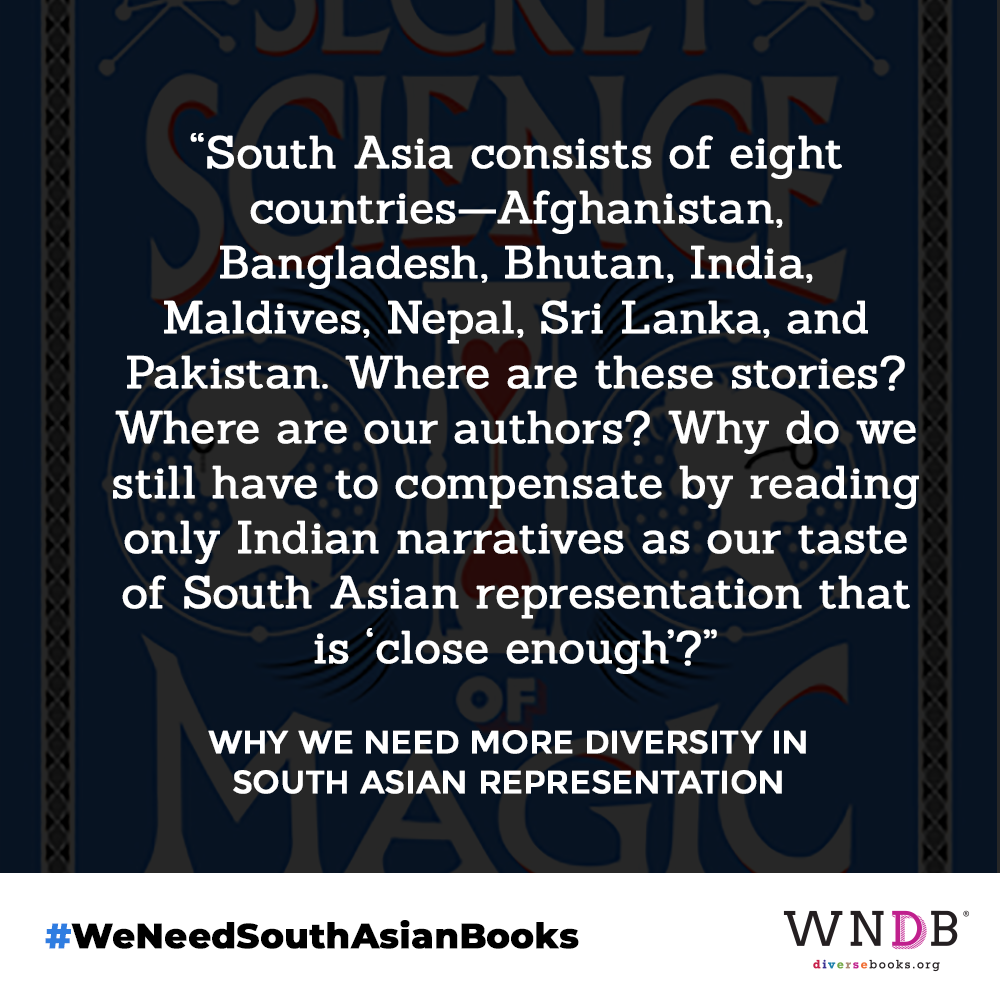 The rare non-Indian South Asian stories are so far and so in between and are sometimes still mistakenly viewed as Indian books by readers and publishing, or sometimes they are not “South Asian enough” because essentially they do not align with the familiar narrative. As Adiba Jaigirdar points out, “I will often see readers labeling my characters Indian, or labeling me Indian…It can sometimes feel like you’re writing into a void, that no matter how much work you put into writing your experience of your very specific South Asian culture, people will try to lump it all together to fit into their preconceived stereotypes.” There’s also an additional misidentification of Middle Eastern and Arab characters as South Asian, and vice versa, that complicates this problem further.

Some of these books are also left to fend for themselves as solitary figures in the industry, to fight against preconceived notions and assumptions about their countries. London Shah explained how she made a conscious effort to center an Afghani character in an SFF narrative, since Afghanis and Pashtuns have been almost nonexistent in that genre. She tells WNDB, “We are more than those never-ending wars, more than our struggles against the patriarchy, more than extremism, seeking refuge, forced marriages, poverty, and Taliban… Pashtun children and teens need and deserve pure escapism too—narratives where they just get to be, and where they enjoy total agency. They must be allowed to dream inside the pages as much as the next child.”

The monopolization of the South Asian narrative erases many Indian communities as well. India is full of diverse languages and cultures within itself, but Indian and Indian American characters in YA still tend to be largely North Indian, erasing stories of those from the South and North East. All of India does not eat naan for breakfast or speak Hindi. Reena Deen, who is a Malayali Muslim writer, told me that she is “always trying to tone down (her) culture” in her writing, because she wonders whether facets of her cultural experience will align with what the average non-South Asian reader has equated as the Indian experience.

This erasure also includes the lack of representation of the Indo Caribbean community, erasing a long history of immigration and indentured servitude. Indo Caribbeans are descendants of Indian indentured workers brought to the Caribbean islands and Mainland Caribbean during colonial times. Ryan, an Indo Guyanese reader says, “at times we’re not seen as ‘real Indians.’ I just think we need our own space within the book world.”

This fixation on North Indian—often Hindu—narratives also disables conversations around caste, colorism, and religious discrimination within India and Indian communities. While North Indian Hindu characters in an American setting do have the pressures of being a minority in the western world, they are often extremely privileged. They’re more likely to be upper caste or to have a lighter-skinned complexion compared to the Indian communities who are usually discriminated against for their lower caste or darker skin. As caste discrimination and Hindu nationalism rage high in India right now, it is dishonest to ignore these characters’ immense privilege within the South Asian community.

As readers, writers, and publishing professionals who want to change the publishing industry to make space for more diverse South Asian narratives, it takes a conscious effort to first acknowledge that South Asian YA has been monopolized by one specific type of  North Indian/American narrative. We need to acquire, publish, promote, and highlight the stories that are still left untold.

South Asian writers might feel pressured to fit their stories and cultures into the mold of what is already popular in YA. Sayantani Dasgupta points out that, “As a storyteller, the key is to resist this “chai-latte-fication” of (her) stories.”  She says that she chooses to “spell words the “Bengali way” rather than the Hindi way as a gesture to honoring this specific nuance.” It is in those little things, the inflection of regional food items; culture-specific jokes, games, entertainment, practices; and the pronounced identification of your character’s origins, not falling into the trap of the North Indian character as the default South Asian.

Ultimately, it comes down to who you are writing for. Are mainstream South Asian books written and packaged for the outsider gaze, to be educational, to keep up with the glossy image that being South Asian means dancing at weddings and eating samosas? If the South Asian tag does not serve the actual community, then who are these books for? If we do not question the issues within our own community then who will? How can this industry celebrate its diversity while effectively erasing so many facets of our culture? When will I get to see a Sri Lankan character in a YA book who says aiyo, eats parippu, and calls out people for automatically assuming she is Indian? 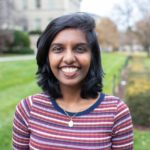 Mishma Nixon is a reader, writer, and book blogger originally from Colombo, Sri Lanka. She is currently a junior studying English and Creative Writing at the University of Iowa, and her research interests lie in diversity in children’s literature, and elements of postcolonial and transnational experience in kid lit. When she’s not reading and writing, she loves to watch sad movies, drink an unhealthy amount of tea, and binge her favorite sitcoms. You can check out her blog here, and follow her on Twitter @chasingfaes.

Previous Post: « Submissions Are Open for the 2021 Creative Writing Awards
Next Post: Skin Deeper: On Publishing A Sister Novel 20 Years Later »
We're thrilled to reveal the cover for TOKYO NIGHT