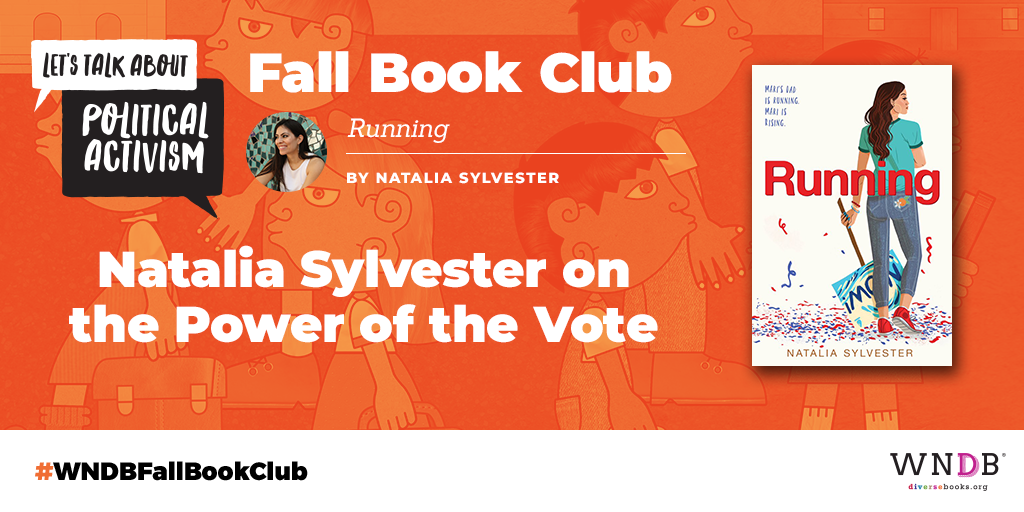 We hope you’re enjoying WNDB Fall Book Club! Today, we are welcoming Natalia Sylvester to the blog in this guest post for her young adult novel Running (HMH, 2020).

If you’d like to purchase Running, we are using Bookshop, which “[gives] away over 75% of [their] profit margin to stores, publications, authors and others who make up the thriving, inspirational culture around books!”

Follow along with our Book Club by subscribing to our Off the Shelf newsletter for educators and librarians.

I wrote a book about an election in which my main character isn’t allowed to vote.

Mari’s fifteen, so she’s not eligible. And even if she were, as the daughter of a Cuban American presidential candidate, her support for her father is presumed and taken for granted. But then she begins to question him—question his choices, policies, actions, and their repercussions. At its heart, Running is a story about power: How it manifests, how it’s often abused, and how it can be harnessed for good if we can find the strength and courage to do so.

Even if we don’t have the power to vote.

I want to make this very clear: I hope everyone who is able to vote will do so and will cast their ballot this election with an awareness of how their vote will affect the lives of those who don’t enjoy this same right. There is simply too much at stake for us to sit this one out. I worry what it will mean for our democracy and for marginalized communities if we don’t turn out in record numbers.

But I also wrote Running knowing that Mari’s power would never manifest on the page in the form of a ballot. I wrote it with an awareness that her story is similar to that of millions—not only of young US citizens who are not yet eligible to vote but of young immigrants whose documentation status doesn’t grant them or their parents this right. It’s the same for some adults who are formerly incarcerated, or for the millions of people (most of them BIPOC) whose voting rights have been actively suppressed by our government.

Too often, our conversations around civil engagement begin and end with a vote. But our power and responsibility to one another extend far beyond that. I wanted to write a book about what happens when we realize that our voices, lives, stories, and actions are a force. That they count whether or not we have a vote. That they can become a movement that in turn becomes change.

So I wrote a book about an election in which my main character isn’t allowed to vote. Because no one expects her to rise up and use her voice. Because the choices she makes during the days leading up to and after the election are world-shifting. And I believe ours can be, too.

There’s a moment in the novel in which one of Mari’s friends is asked what she’s hoping to accomplish if she’s not even old enough to vote. At first, Crissy stumbles in trying to answer, but the more she speaks, the more she realizes the most powerful tool she has is her voice. Raising it means holding those in power to account; staying quiet would only enable more injustice.

“We see what they’re doing, and we’re not letting it go,” she says. “They can never rely on our silence to protect them again.”

Natalia Sylvester is the author of two novels for adults, Chasing the Sun and Everyone Knows You Go Home, which won an International Latino Book Award. Born in Lima, Peru, she grew up in Miami, Central Florida, and South Texas, and received a BFA from the University of Miami. Running is her YA debut. She lives in Austin, Texas, and can also be found at nataliasylvester.com.

Previous Post: « MFA vs. YA: How MFA Programs Can Discourage YA Writers
Next Post: Why Aminah Mae Safi Wrote a Book About Saving Indie Bookstores »
LAST CALL for WNDB 2023 Internship Grant Partners!