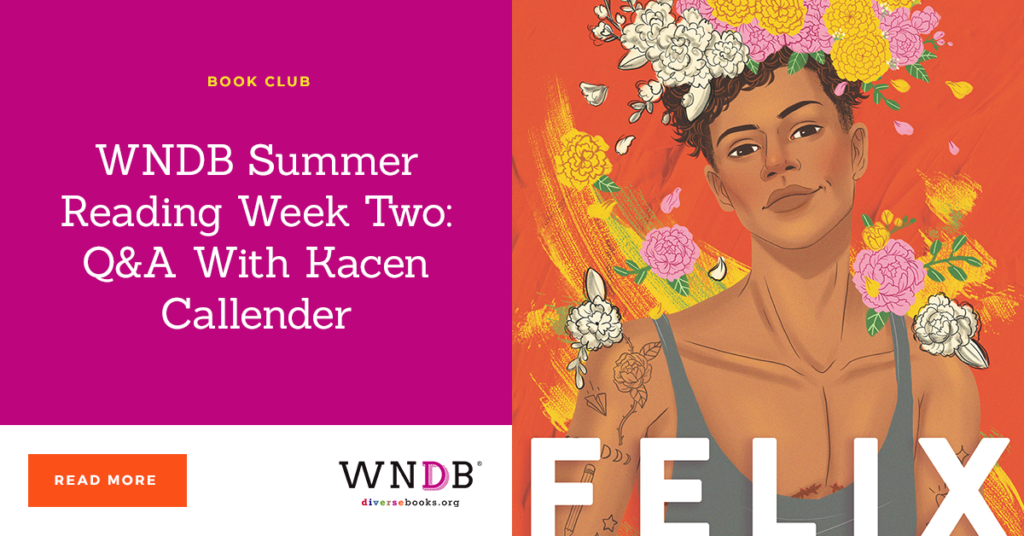 Welcome to #WNDBSummerReading! Our goal is to help families engage in discussions on race and diversity. This week, we are welcoming Kacen Callender to the blog in this Q&A for their young adult novel Felix Ever After (Balzer + Bray, 2020). 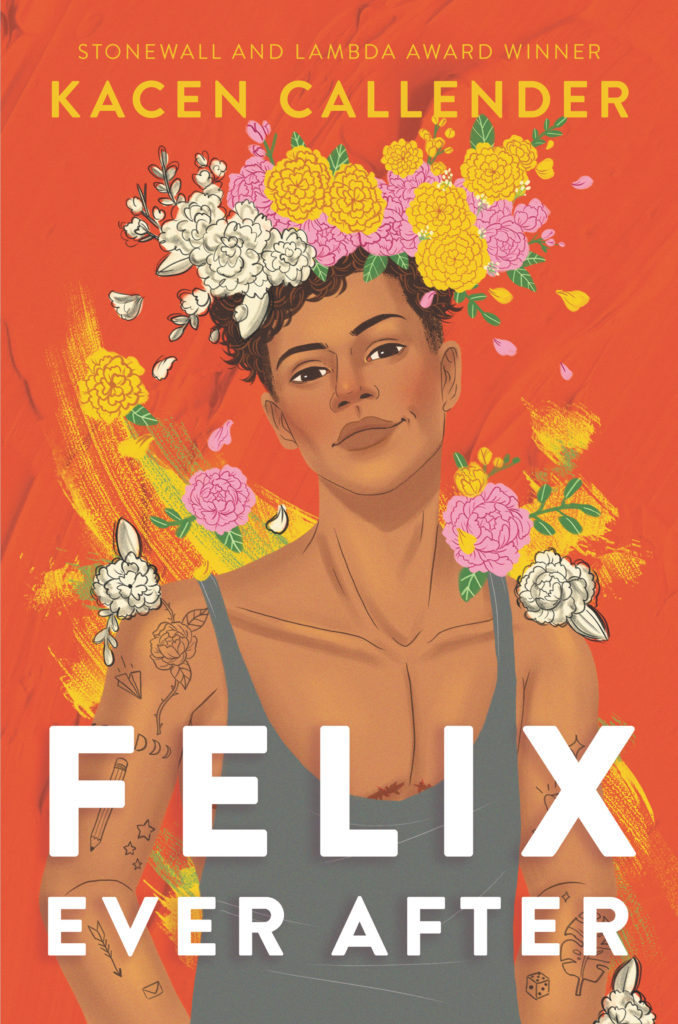 From Stonewall and Lambda Award–winning author Kacen Callender comes a revelatory YA novel about a transgender teen grappling with identity and self-discovery while falling in love for the first time.

Felix Love has never been in love—and, yes, he’s painfully aware of the irony. He desperately wants to know what it’s like and why it seems so easy for everyone but him to find someone. What’s worse is that, even though he is proud of his identity, Felix also secretly fears that he’s one marginalization too many—Black, queer, and transgender—to ever get his own happily-ever-after.

When an anonymous student begins sending him transphobic messages—after publicly posting Felix’s deadname alongside images of him before he transitioned—Felix comes up with a plan for revenge. What he didn’t count on: his catfish scenario landing him in a quasi–love triangle….

But as he navigates his complicated feelings, Felix begins a journey of questioning and self-discovery that helps redefine his most important relationship: how he feels about himself.

Felix Ever After is an honest and layered story about identity, falling in love, and recognizing the love you deserve.

I went into Felix Ever After knowing I would want to write about a person like me, someone I had never before seen in books or in any media: A Black, queer, trans masculine person who identifies as a demiboy. I’ve seen trans masculine characters (though still very rare), I’ve seen queer characters (not as rare these days, but there could still be more), and I’ve certainly seen plenty of non-Black and especially white characters in stories before. Sometimes it’s a mixture of two of these identities, but never all at once. I want families and readers to understand how interlinked these identities can be, and how even a Black, queer, and trans person might not feel safe in a queer space because of racism, or transphobia. There are different levels of privilege that should be acknowledged and discussed.

But, more than anything else, I wanted to share my experiences since I’ve never seen myself reflected before fully. I’m not the monolith, and there are as many different stories of Black, queer, and trans people as there are Black, queer, and trans people in the world (and there are many!). Still, I hope readers who don’t identify as these identities might learn and have empathy for someone like Felix. And, most importantly, if someone identifies as Felix does, I hope that they read his story and feel seen and heard and loved and celebrated.

Felix’s story deals with serious issues like transphobia and racism, but there is also joy and self-love. How did you balance those themes?

I looked at Felix’s story as I did my own life. I also have to deal with overt transphobia and racism, as well as the more insidious kind where well-meaning people who consider themselves allies might not even see their own micro-aggressions.

But I also live a life of love. I’m building a community of queer and trans and nonbinary people of color who love their identities and my own. I don’t experience only either pain or joy—I experience both, and more, every single day, sometimes even simultaneously, as a full, rich, complex human being—just like any other character we’ve seen portrayed on the page. Craft-wise, I think that as a writer it’s easier to look at these themes as different threads of the story: There are the conflicts with transphobia and racism, and there are also the storylines that bring Felix joy: Each thread has to move forward steadily, and because of that, they hopefully feel balanced in the novel as well.

The cover for Felix Ever After is beautiful. What was the process of creating the cover like?

Thank you! It’s by nonbinary illustrator Alex Cabal. I absolutely love their work! I basically made the suggestion of showing one of Felix’s self-portraits on the cover, specifically the one where he has a crown of flowers. There was some concern that this might look too similar to other covers (something publishers have to think about), so the design team suggested that the cover be a portrait that’s a work-in-progress. A few of the flowers on Felix’s head are still white and sketchy rather than finished, and there are streaks of paint behind him. I’m beyond excited to be able to see a Black boy on the cover with top surgery scars, too!

You worked as an associate editor for Little Brown, acquiring books. Did that job inform how you write your own fiction in any way?

I think my time at Little, Brown Books for Young Readers helped me more clearly see the marketplace, and see where there were gaps. Listening to meetings, it became obvious for example that there’s a huge gap in queer middle grade books, and especially with Black, Indigenous, and people of color protagonists. This pushed me to write Hurricane Child, and I’m excited that there’s been spectacular growth for queer middle grade in the past few years. I think I continue to keep that lesson with me as I look at the market and see how my books might be adding something new and needed, or if they are in conversation with other books that have already been published, and what fresh, new perspective I can add to the table.

What do you most wish people knew about the publishing industry?

I think I wish more people knew that there are others on the other side working really, very hard to try to create change—that some people have dedicated their lives to working in publishing to push for more diversity—but that it can be difficult to be, many times, the only person in the room fighting for change and that many people have to learn how to pick and choose battles so that they can have the longevity to continue in the industry.

That said, so much change is slow because the industry has maintained a sort of status quo that makes it hard for more people of different backgrounds to succeed and stay in publishing. If there were overall changes to the industry, like making it more accessible than being in a place like New York City, there would be more diverse staffs and greater change.

Do you have any advice for diverse writers working on their first novel?

Don’t be sidetracked by the fear that your book won’t be accepted because of your identity. I do strongly believe that, if craft is studied and honored and a person is writing from their heart, for a specific purpose of helping others feel seen or learn empathy, nothing will stop that book from making its way into the world. Even if you have to put it in the drawer to write another book first, or take a moment to study craft—if you keep going, your story will always make its way into the world.

Felix is a YA novel. Do you have any recommendations for MG titles or picture books with similar themes? What other titles would you suggest for families reading together this summer?

There aren’t any BIPOC, queer, and trans or nonbinary MG titles that I know about, but for a POC and queer middle grade title, you can check out Maulik Pancholy’s The Best At It and you can keep an eye out for Mariama Lockington’s In the Key of Us. For titles featuring trans protagonists, Alex Gino’s George is a classic, and Ana on the Edge by AJ Sass features a nonbinary main character. When Aidan Became a Brother is a wonderful picture book about a trans boy becoming a brother for the first time.

What are you working on next?

I’d love to write a Black, queer, and nonbinary protagonist for a middle grade book, and fingers crossed for a fantasy YA featuring a cast of found family queer and trans people of color.

Thank you so much for having me!

WNDB is proud to be partnering with Mahogany Books, a Black-owned bookstore in Washington, DC, for this program. Please consider ordering your books with them. Email your receipt from Mahogany Books to carolinerichmond@wndb.local to receive #WNDBSummerReading bookmarks and WNDB stickers, while supplies last. 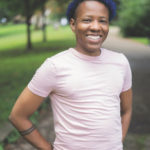 Kacen Callender is originally from Saint Thomas, in the US Virgin Islands. Kacen has a BA from Sarah Lawrence College and an MFA from the New School’s writing for children program. They are also the author of the young adult novel This Is Kind of an Epic Love Story and the middle-grade novels King and the Dragonflies and Hurricane Child, winner of the Stonewall Book Award and Lambda Literary Award.