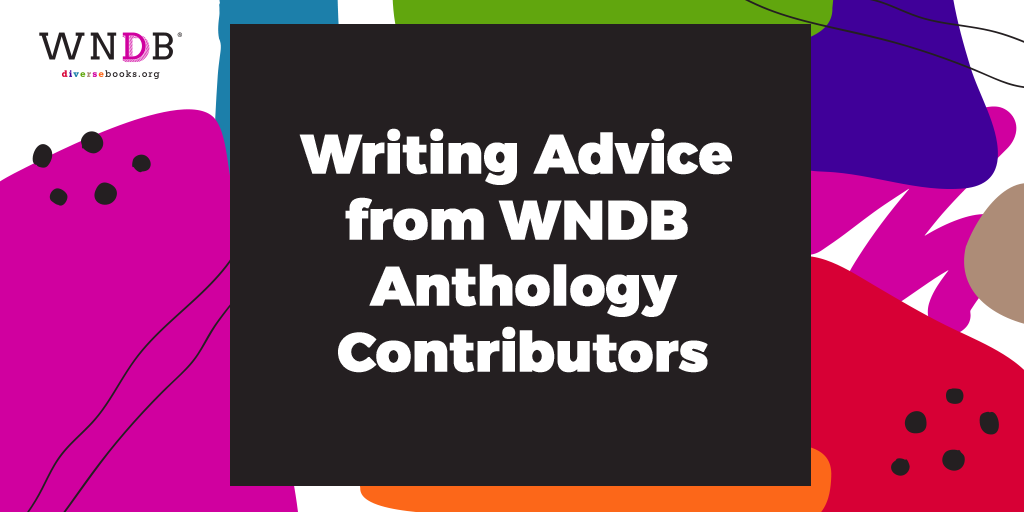 Over time, we’ve gathered bits of writing wisdom from the awesome writers who’ve contributed to our anthologies. We now present them in conjunction with Penguin Random House’s Creative Writing Awards program in the hopes that they provide inspiration and guidance!

High school seniors may apply for the PRH Creative Writing Awards up until March 2, 2021. Winners may receive up to $10,000 in scholarship funds — details and application here.

[Author Meg Medina is seating with her face angled slightly away from the camera as she speaks.]

I got two pieces of advice that — I’m going to give you the piece of advice I received and also the one that I give. The piece of advice that I received was, not to be afraid.
Like, I was afraid that I couldn’t be a writer because I wasn’t going to be like one of these amazing writers, like, that are part of the canon of American literature and so on — like, the bar was up here. I couldn’t see myself anywhere, there was nobody that looked like me or had you know, from Queens, New York or anything that was part of this revered canon of American literature. So what was I going to add to it?

And the advice I got came from a professor who said to me, “Listen. You — painters can’t go into art saying, ‘I’m not going to paint anything unless I’m Picasso.’ Right? They have to go in and say what — they have to be enough with their story. And the same thing is true in writing.”

So what I say to young people is that you’re enough, what you’ve lived is enough, what you know is enough for a story. So don’t let that stop you. And then persevere because in writing the first thing is that it’s hard, like the first thing you put on the page is not the last thing, it’s not your best thing, usually. So it takes some time to get your craft going, to get the words to say what you really mean. It’s hard!

And then in publishing itself you’re told “no” a lot early on. “No, it’s not ready. No, it’s not right for our list. No, no, no.” But you have to persevere. You have to
keep at it, and not take no. And that’s true for writing and just in life in general. Whatever it is that you have your sights on, not giving up easily.

[Author Grace Lin is standing and facing the camera.]

I think the best advice that I’ve ever gotten is, you write for yourself but you revise
for the reader. So it’s the idea of creative freedom; you write whatever you want, that is fine, that first draft is all for you! But if you are going to publish it and — publish it or try to share it with the world, you have to revise with a reader in mind. So that’s been really important to me to think about.

[Author Hena Khan is standing and facing slightly away from the camera.]

I would say, really [the best advice] is to write from the heart. And write what you know, and not follow or chase trends. I know a lot of times people are like, “Ok, vampires!” You know? “Everybody’s reading vampires, so.” And sometimes you see things and you wonder like, “Should I be writing something like this?”

And I know I write a lot of realistic fiction and things that are close to my heart, stories that are based in — grounded in reality, and I remember somebody even questioning that once and saying, “Well, is it really creative if you’re just writing about things that really happened?” and I was like [gasps] “Isn’t it??” I started to question myself. But I realized that we need all types of stories. I like writing things that are grounded in reality and experiences of even myself for other people and — of course they’re fictionalized but, you know. They feel real to me. So to write what you, you know, feel comfortable with, I think is good advice.

[Author Joseph Bruchac is seated and facing the camera.]

[Of who gave him the best advice:] I’ve had so many good teachers and friends and acquaintances who’ve shown me the way so many times over the years, it’s hard to pick one out. But I think perhaps a professor of mine at Cornell University, was named James McConkey. Jim said to me, “If you’re going to write something, put everything you know into it. Because you can always take it out later.” When you revise, you may end up with more than you need, but that’s good because you can actually — ‘course, now with word processing you just save it — speaking of saving — set it aside, and it may turn out to be useful in some other project.

Well, another friend, a teacher of mine, a poet named William Stafford, Bill always used to say that sometimes writing is like starting a car on ice. Your wheels spin for a while, but just keep going and creep forward a bit at a time and eventually you’ll get something done. And don’t believe in writer’s block. If you have writer’s block, then start writing. Eventually, it will make sense.

[Author Rita Williams-Carcia is seated and angled to face slightly away from the camera.]

One of my teachers in undergrad made me aware of a term. Author and screenwriter
Sonia Pilcer taught my master class when I was a Senior and she said, “I want you to listen to this character sketch. I want you to hear the voice. The author of this piece has voice.” Now, she didn’t say who and all of that, but I heard as she read, she was reading my work. I didn’t ask her “what was voice,” I just kind of took it in and thought about it, and thought about it a lot. About what creates voice.

And so that’s always been kind of a meditation point for me as I approach my writing and what does my — not so much what my work sounds like, but how does it feel. And I think voice is very much about feel. And so I always, try to be very aware of it, you know, in a very natural, kind of calming way.

[Author Linda Sue Park and writer Anna Dobbin are seated side by side outdoors. Birds chirp in the background.]