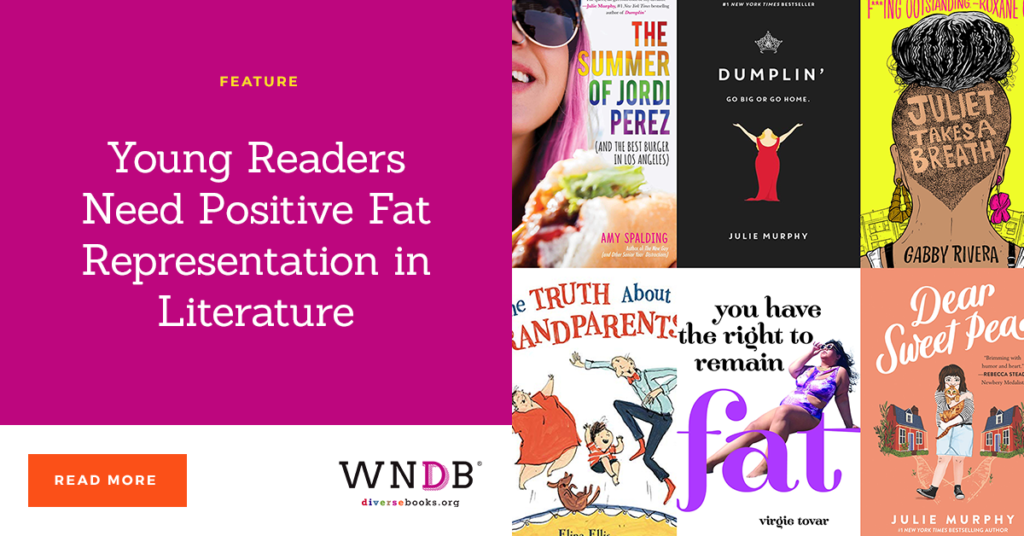 In the current kid lit canon, only a handful of books with fat-positive representation come to mind. New York Times bestselling author Julie Murphy writes fat protagonists in all of her books, including the middle-grade novel Dear Sweet Pea. Likewise, Amy Spalding writes young adult novels with fat protagonists, like The Summer of Jordie Perez (and the Best Burger in Los Angeles). The eponymous protagonist of Gabby Rivera’s Juliet Takes a Breath is described as fat. Winnie, the main character in If It Makes You Happy by Claire Kann, is queer and fat. And finally, there are picture books that celebrate body diversity like The Truth About Grandparents by Elina Ellis and Her Body Can by Katie Crenshaw, Ady Meschke, and Li Liu.

The simple fact is, most media that features fat characters—including books aimed at young readers—employ fatness as a villainous trait. Very few authors are willing to write fat characters as people, let alone as heroic or even just decent.

That’s why authors like those listed above, as well as Evette Dionne, editor Angie Manfredi and others are so important to the kids’ and young adult lit world: They champion fat-positive representation, which is key for allowing young readers to see themselves represented on the page and not fall into the pervasive trap of toxic diet culture, which urges everyone to be smaller and take up less space. As of 2020, there are few fat authors who write fiction aimed at young readers—and even fewer of them are people of color, which is a problem in and of itself.

“Fat-positive representation shows that body diversity is a positive thing and that there is nothing wrong with being whatever size you happen to be,” author and fat studies scholar Virgie Tovar told We Need Diverse Books. “There’s evidence that children in the U.S. currently learn fatphobia at the age of five. Children learn that being fat is one of the worst things that can happen—worse than losing a parent, even. Fatphobia becomes cemented through observation—watching how the people and media around them treat fat people. No one wants to be hated, made fun of constantly, or considered evil. If there is no access to representation that counters this bigotry, people will continue to model bigotry (if they’re thin) or internalize a sense of inferiority (if they’re fat) and feel that it’s normal.”

Tovar added, “All children deserve to feel fully human, and like they are part of the conversation and part of the story, not a weird side character. When we create room for fat people to have a full range of experiences and characteristics, we create room for every single person to live a life free from bigotry and discrimination regardless of size. We tell children of all sizes that there is nothing wrong with their bodies, which is going to set them up to have a life where they have a better relationship with themselves, with food and movement, and with others.”

As often as people claim fiction doesn’t have to reflect real life, the simple fact is that when readers engage with fiction, they identify with the characters and embody at least some of the beliefs expressed in the text. This is why diverse characters and #OwnVoices books—books written by marginalized people, about marginalized people—are so important. They provide space for authors to explore true-to-life experiences and give characters who’ve been relegated to stereotypes for decades the chance to really shine.

“Fiction plays a big role in how people see themselves and others. So, for instance, I’ve noticed that it’s often fictional representations (in books or movies) that will override lived experience when it comes to people’s idea of who and what is normal,” Tovar explained. “Fiction can change our baseline idea of who is normal, desirable, interesting, friend-worthy, etc. Fiction is also the realm of imagination. Imagination is what we all need if anything is ever going to change or get better.”

Author Amy Spalding, whose young adult novel The Summer of Jordie Perez (and the Best Burger in Los Angeles) follows fashion-obsessed fat teen Abby Ives as she falls in love with the much thinner Jordie Perez. When she first started her writing career, Spalding says, she didn’t know if writing about fat characters in a positive way was “allowed.”

“[It’s] extremely silly, but initially I assumed to get published that my characters needed to be thin and straight. Then I luckily realized I didn’t care what I was ‘allowed’ to do and wrote The Summer of Jordi Perez (and the Best Burger in Los Angeles) which had a protagonist who was both fat and queer,” Spalding told WNDB. “And I’ve truly never had a reader response like I have to this story. So many amazing fat people have reached out to me letting me know what it felt like to see a girl like them as the lead in a love story. It was a long haul getting the book published, and yet it turns out that writing a fat girl was great for my career! But I didn’t do it for that reason; I did it for the fat girls like me.”

Spalding has a master’s degree in media studies and explains that research shows that positive representation of “the other” broadens people’s minds and helps them understand people who are not like them. However, her main goal in writing about fat characters is not to convince straight-size people of their worth. It’s to allow fat readers to see themselves represented on the page as more than just villains.

“I spent a lot of time being told by society that I was worthless, or somehow even less than that, that my life would start once I was thin. Yet that didn’t reflect my reality or the realities of many fat people I knew. How was my life so great if this was true? It just wasn’t, and yet the cognitive dissonance of thriving in a hateful society meant I still found plenty of time to hate myself. And if a book like mine or Dumplin’ or The Other F Word can help someone go through that less, that feels really powerful,” Spalding said.

“Representation is also just about accuracy. When I read books that straight-size people write about fat people, fat people are thinking about their bodies so much! They’re like, ‘I jostled my fat thigh in anticipation while checking the time on the watch strapped around my chubby wrist,’ and, like, I have never categorized my body this way while nervously shaking my leg and checking the time! I have lots of annoying qualities but they aren’t because I have a big butt.”

The first time Spalding encountered truly fat-positive representation in a book, it was Julie Murphy’s Dumplin’, which was released just five years ago. The book has since been adapted for a Netflix Original Movie and boasts a sequel, Puddin’.

“I remember that I had to keep setting it down and taking a moment because so many lines in the book were so real. I’d never seen a fat girl portrayed in this way, and it blew my mind and thrilled me and made me even more determined to write amazing fat girls too,” Spalding said.

“I actually do think it’s improving, though it’s gonna take a long time to reflect reality fully. That said, I have so much hope seeing the middle grade and YA communities getting chances to recenter representation of more types of bodies. I’m proud to be a part of groups of people working so hard to show why this stuff matters,” Spalding said

Spalding’s most recent book, We Used to Be Friends, doesn’t feature fat characters, but it does feature two girls who don’t hate their bodies, which is also revolutionary. Marginalized authors are frequently pressured to explore their own trauma or create characters who share their identities, but fat authors being given the space to write about non-fat characters is just as worthy of celebration. Tovar’s latest non-fiction book, The Self-Love Revolution: Radical Body Positivity for Girls of Color, is an unapologetic guide for teen girls of color who want to combat body stigma in pop culture and beyond.

Fat characters shouldn’t always be villains, especially in books for young readers. Painting them as evil, incorrigible, abusive figures make all kids—regardless of size—internalize the false idea that fatness is morally wrong, which has a lasting impact into adolescence and adulthood.

As Spalding said, “Every fat person out there thinking about writing a fat story: Please do it!”

Samantha Puc (she/her) is an essayist and culture critic whose work has been featured on Bitch Media, them., The Beat, The Mary Sue, and elsewhere. She mostly writes intersectional pop culture analysis with a particular focus on representation of LGBTQ and fat characters in fiction. Samantha is the co-creator and editor-in-chief of Fatventure Mag, an outdoors zine for fat folx who are into being active, but not into toxic weight-loss culture. She lives in Montana with her partner and cats.

Previous Post: « Why Diverse Books Are Important for Everyone—Not Just Marginalized Kids
Next Post: Q&A With Rumi Hara, Nori »
Congratulations to the 2023 #ALAYMA winners and ho